In my last post we were saying goodbye to Victoria, the capital of the Canadian province of British Columbia. Early on July 3 we took the ferry from Victoria to Port Angeles, WA and from there headed to friends’ house south of Seattle. On the Fourth of July we went to Vashon Island on their boat where we anchored offshore and later that night experienced one of the most spectacular fireworks displays I’ve ever seen. On July 5 we left for Forks, WA on the Olympic Peninsula where we’re spending tonight; if you were a Twilight fan (or foe), you may remember this is where the saga began. 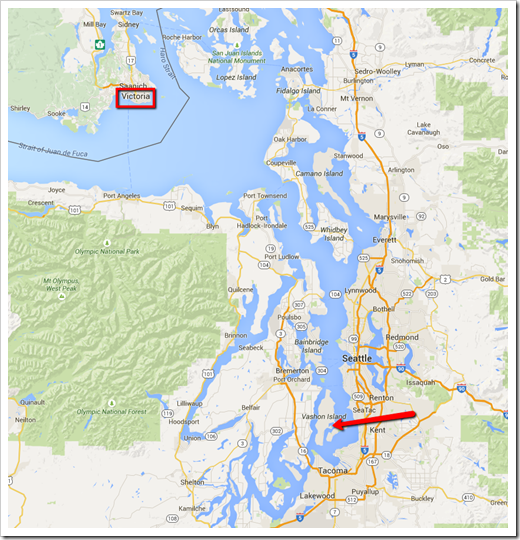 But let’s start early on July 3. The ferry from Victoria, BC to Port Angeles, WA left at 6:10 a.m. but we had to be there an hour earlier to go through U.S. Customs and Immigration. That meant getting up very early—not my favorite thing to do. The upside was seeing the sun rise to the left of the Empress Hotel in Victoria’s Inner Harbour. 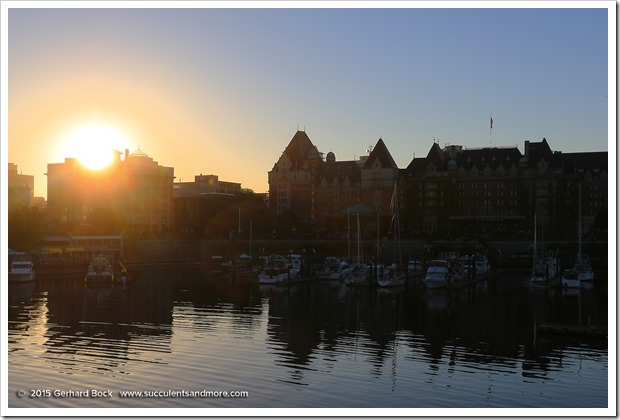 The Inner Harbour was being bathed in misty morning light as the ferry was pulling out.

We also saw the two condo towers (left and middle in the photo below) with the interesting water gardens I briefly mentioned in this post. I’ll show you more pictures in a separate post. 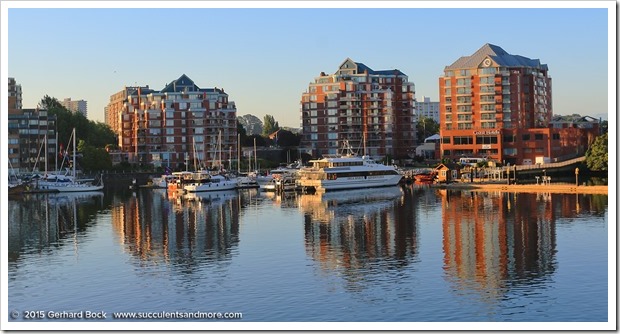 Fast forward now to the Fourth of July, Independence Day. Our friends took us out on their boat to the spot marked with an arrow in the map below. This inlet between Vashon Island and Maury Island is called Quartermaster Harbor. Tacoma is to the south. 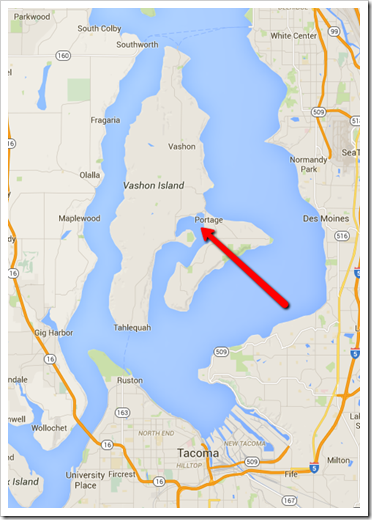 On the way there we had a spectacular view of 14,411 ft. Mount Rainier, rising behind downtown Tacoma in the photo below. 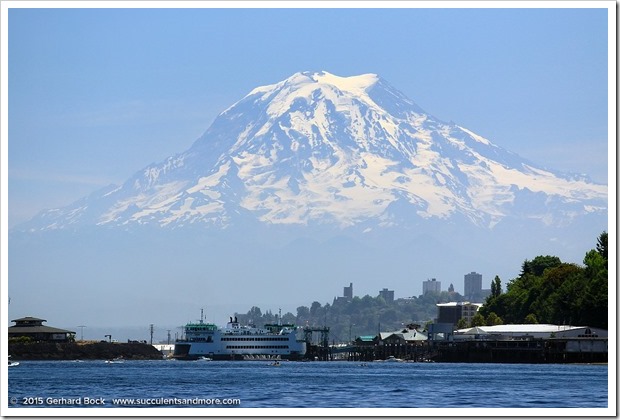 In the next photo you see the Tacoma Narrows Bridge that connects Tacoma with Gig Harbor. 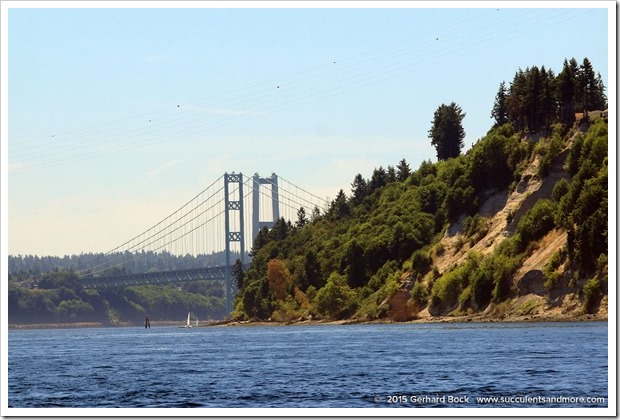 And here is Mount Rainier again, with a ferry in front of it: 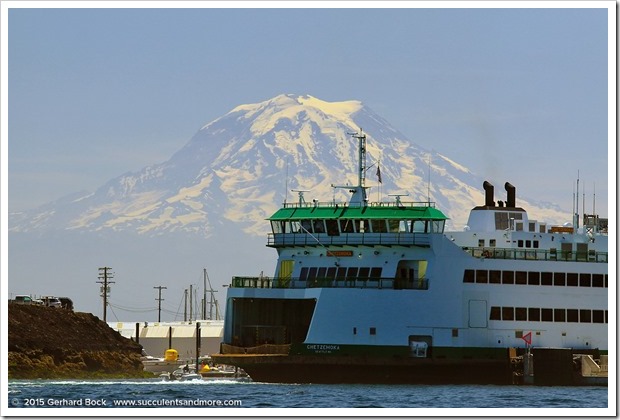 This jet ski brings it home how large these ferries are, and this one wasn’t even one of the biggest: 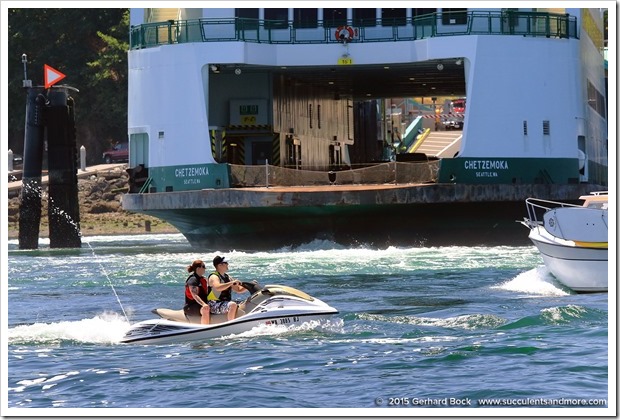 Vashon Island is dotted with pricey-looking houses that must have astounding views. I particularly liked this one, partially hidden among the trees. Look closely and you’ll see a staircase below the deck. It goes all the way to the private beach. 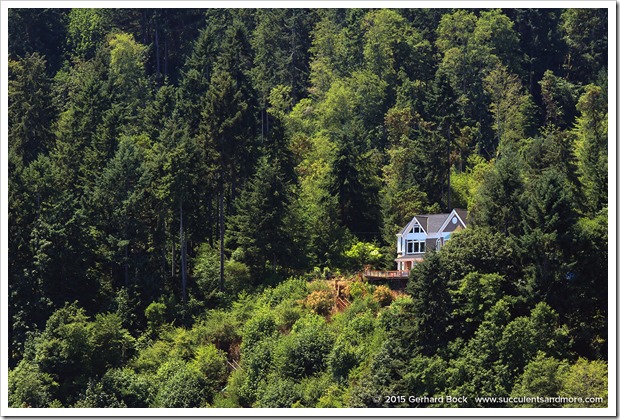 When we reached our destination, we tied up to the boat owned by friends of our friends, which in turn was tied up to another boat, etc. In total, our little “pod” consisted of five boats, three of which had their anchors out. The shoreline of Vashon Island is private, so anchoring offshore is the only way to overnight here. 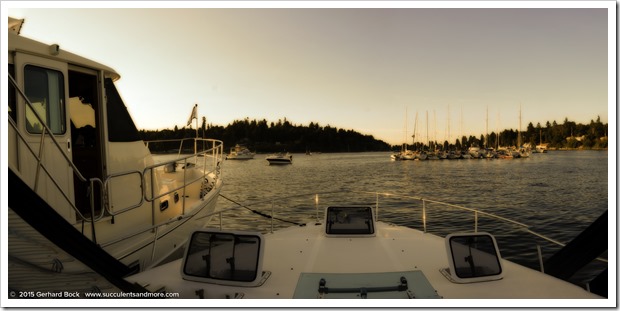 Behind us was an even larger group of eleven sailboats that did the same thing. 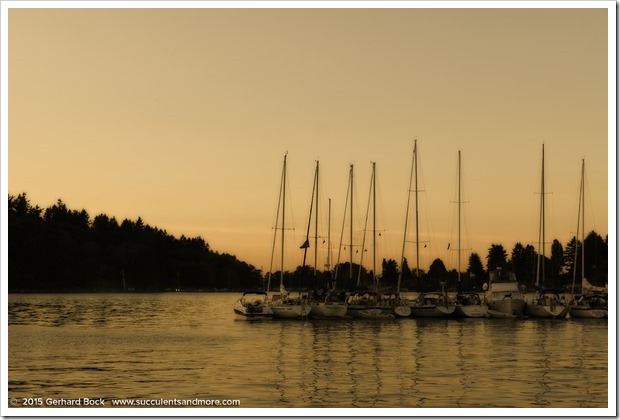 The reason why our friends (and their boating buddies) picked this spot was the fireworks display put on by local residents. The fireworks were launched from a barge across the inlet from our location. We literally had the front-row seat; because of the safety perimeter, no other vessel was allowed between where we were and the barge.

The fireworks may have been organized by a small local community, but the quality of the display rivaled that most larger cities. The folks here definitely don’t mind delving deep into their pockets to get the best.

Since we were on a boat where using a tripod would have been pointless, all my shots of the fireworks are handheld, hence a little blurry. I think that actually accentuates their beauty. I hope I’m able to give you an idea of how special this experience was. I will never forget this evening. In addition to everything else, it was also the first time I’d ever slept on a boat. 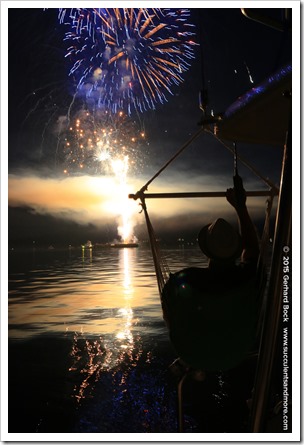 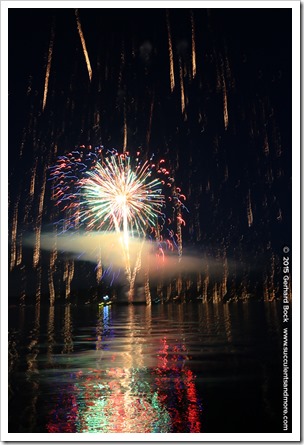 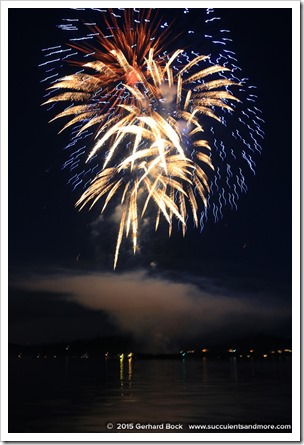 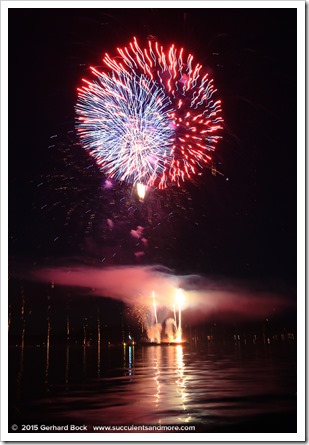 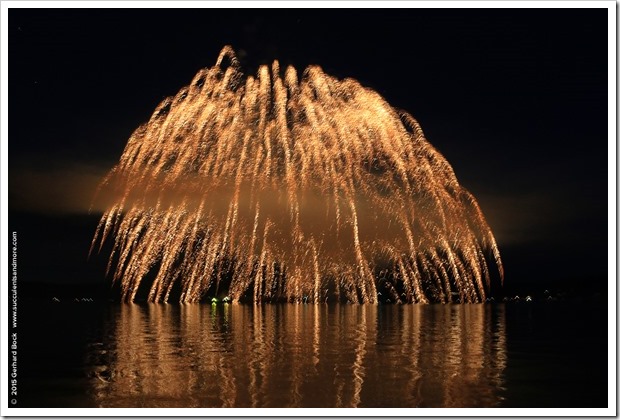 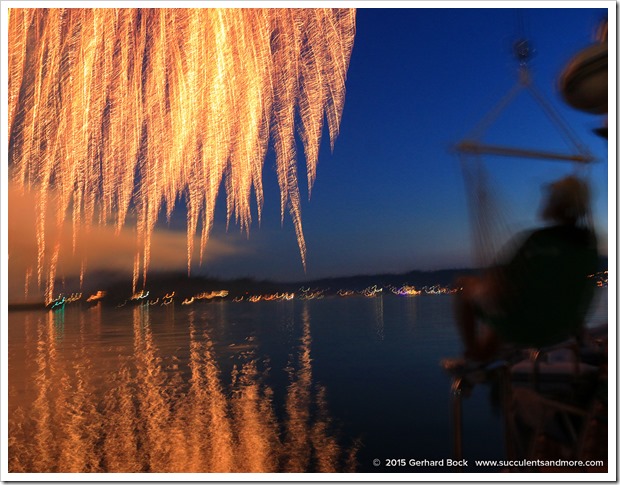 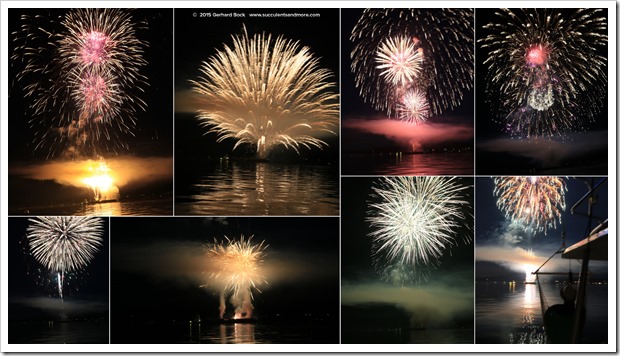 Today we drove on to Forks, WA on the west side of the Olympic Peninsula. 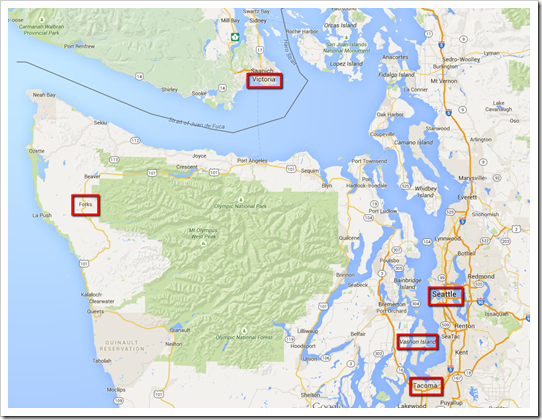 As we were getting closer to Port Angeles, the sun began to disappear behind a layer of thickening haze that had a strange yellowish-pink hue. When I got of the car to take the next photo, my fear was confirmed: I could smell smoke.

The ominously colored sky stayed with us as drove through Olympic National Park. Here is Lake Crescent:

Closer to Forks, a pale orange sun hung in a dirty sky like a harbinger of evil in a bad horror movie. 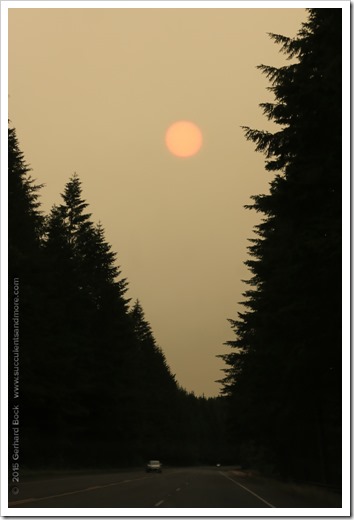 Later in the evening somebody in the local pizza parlor told us that the haze and the smell of smoke was from wildfires in Canada. This article confirms that what we saw was from than 60 wildfires in British Columbia.

We’re still over 600 miles from home, but the threat of wildfires is very real where we live as well. I continue to fear the worst as this bone-dry summer continues to unfold.