We ended our three-day stay in Vancouver with a walk among the trees—75 feet above ground. The Greenheart Canopy Walkway at the UBC Botanical Garden (UBCBG) is a series of suspension bridges that connect platforms attached to trees. The UBCBG website describes it like this:

The Greenheart Canopy Walkway will spark your adventurous spirit as you navigate suspended walkways and tree platforms high above the forest ﬂoor.  Located in the heart of the UBC Botanical Garden, the 310m long tree top canopy walkway hangs from huge Douglas firs, Red cedars and Grand firs, many of which are over 100 years old. Reaching a height of nearly 20m above the forest floor, the walkway will give you a bird’s eye view of Vancouver’s magnificent coastal temperate rainforest.

On paper it sounds like a great nature experience, with a touch of adventure thrown in for good measure. Look at the photos below. Doesn’t it look awesome? 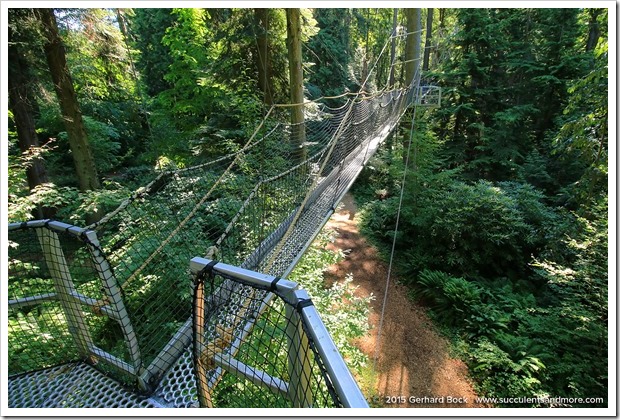 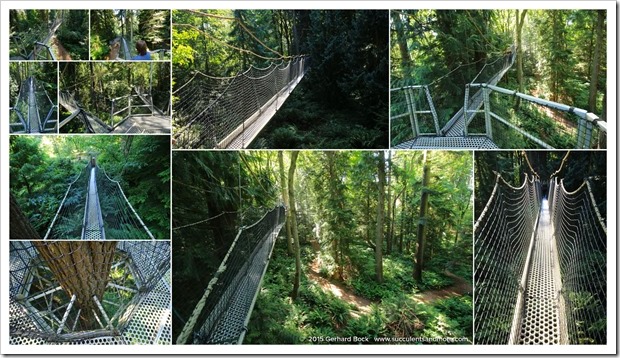 In reality, however, it verged on terrifying.

We’d done something similar in Tasmania years ago, but there the walkways were completely rigid and wide enough for two people to pass each other. In contrast, the Greenheart Canopy Walkway was much narrower and wobbly as Jell-O. I knew that everything was safe and secure, but the sideways swaying was very unsettling. I was afraid one of the suspension bridges would flip over to one side and then do a 360° turn—all the while knowing that’s completely impossible. 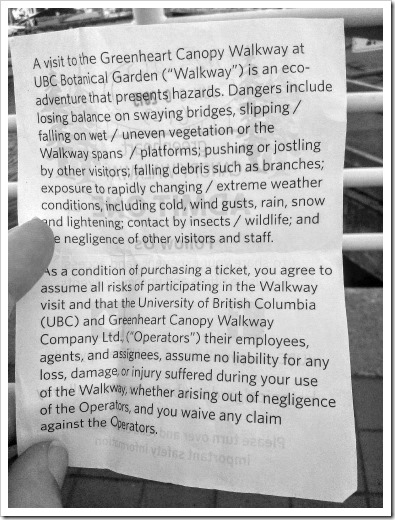 A list of the many hazards awaiting unsuspecting visitors. My favorite is “contact by insects.” Never underestimate the power of the mosquito!

Here are a couple of videos I risked life and limb (and sanity) to shoot. The first is longer and shows an entire walkway segment. The second is short but shows the swaying quite well.
If the video quality is bad, try playing the videos straight from YouTube:
Be sure to click the Settings (gear) icon and select at least 720p (HD).

It was an experience I’ll never forget but I’m not sure I’d ever want to do it again. Although I will say that the views from the tree platforms were impressive.

After fortifying ourselves with refreshments from the UBCBG snack bar, we battled our way through downtown Vancouver (where the traffic was once again HORRIBLE) to reach the ferry terminal at Horseshoe Bay northwest of Vancouver.

Horseshoe Bay is in a scenic spot right at the entrance to Howe Sound:

We were thrilled to find what we thought was a free parking spot right near the waterfront. Wrong! We apparently parked “in contravention of a traffic control device.” Gotta love the choice of words! At least the ticket is only $28 in USD. Could have been worse! I still wish they’d paint the curb red where you’re not supposed to park. 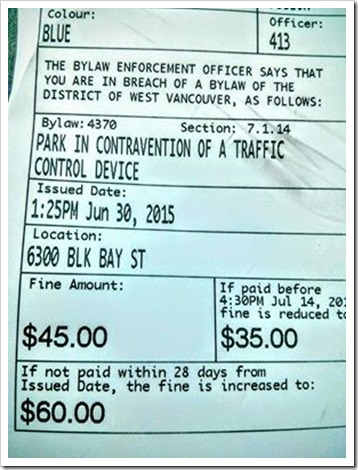 The 1 hr. 40 min. ferry crossing (or “sailing” as they call it) from Horseshoe Bay on the mainland to Nanaimo on Vancouver Island was like a cruise. The scenery was breathtaking, the air warm but not hot, and the atmosphere relaxing. I’d griped about the high cost of the ferry, but in hindsight it was worth it. I’d initially thought I might take a nap, but I ended up being too busy looking at the mountains and water. 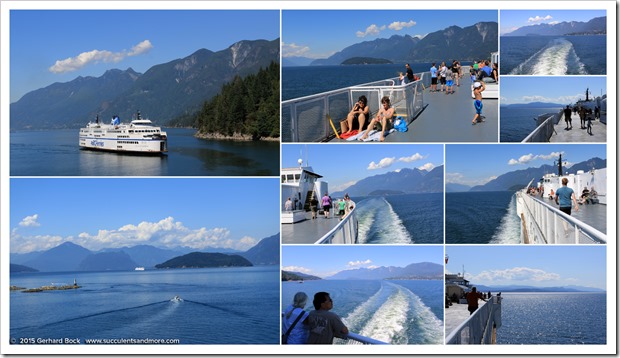 Our home for the night, Nanaimo, is located on the east side of the island, about 1/3 of the way up from the bottom. We’ll spend the next two nights in Victoria, the capital of British Columbia, on the southern tip. 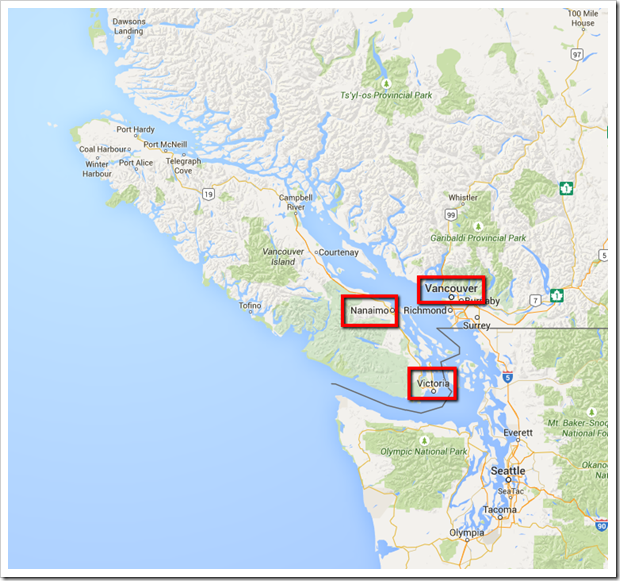 After the hustle and bustle of metropolitan Vancouver, we were happy to be in Nanaimo. The pace here is slow; nobody seems to be in a hurry. The downtown area is right near the waterfront, as is our hotel, so we were able to walk to dinner and down to the harbor without having to drive. Another welcome change from Seattle and Vancouver.

And we finally tried poutine and Nanaimo bars. The jury is still out on the poutine because the variant we ordered—vegetarian with schawarma spices and sauces—was so far removed from the original that we weren’t able to render a fair verdict. We will try again in Victoria.

The Nanaimo bar we had, on the other hand, received a universal thumbs down from all four of us. It was gaggingly sweet and didn’t have much flavor otherwise. I don’t know if that’s typical or if the baker make a mistake. As with the poutine, I’m willing to give it another shot. After all, it’s a national dish here in Canada, and tomorrow (today, by the time you’re reading this) is Canada Day! 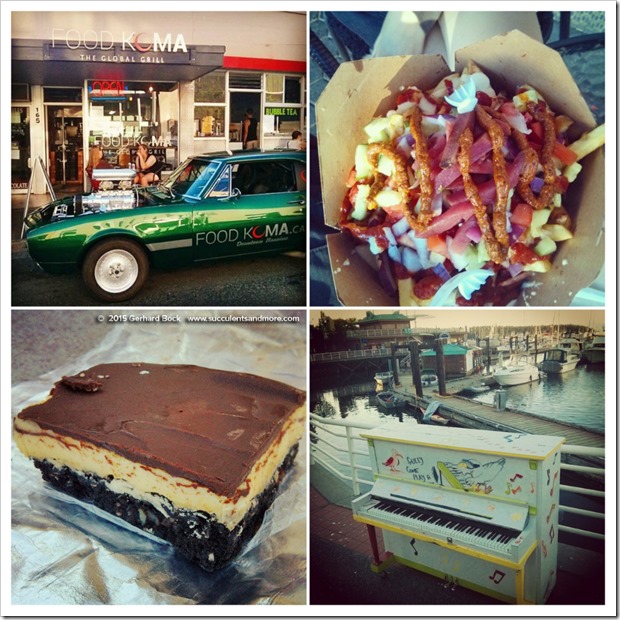 Living it up in Nanaimo