Loree Bohl over at Danger Garden started the “favorite plant of the week” meme a few years ago. Many other garden bloggers have followed suit. I’ve done a few “plant of the week” posts but never with any kind of regularity. Today’s post is one of those once-in-a-blue-moon plant portraits.

My favorite plant this week is Aeonium hierrense. I bought it in a 4-inch pot at Annie’s Annuals in July 2011 based on this description:

Super rare & possibly the most majestic of all Aeoniums, this giant boasts impressive red-edged, long-leaved rosettes to 30” across atop thick, tropicalesque stalks to 3’ tall. Handsomely patterned in olive green & white, they look like designer palm trunks! After 3 or more years, it bursts into a pyramidal head of pink & white starry blooms. It’s monocarpic, so after blooming it will pass away (hopefully leaving behind lots of seed!).To our knowledge we are the first nursery in the U.S. to offer this elephant-sized & imposing species - possibly the largest in the genus. EASY & low maintenance, it makes a stunning subject for a container or dryish well-drained garden.

My specimen spent the first two years in a pot where it didn’t do very much. But after I put it the ground, it exploded, living up to its promise. 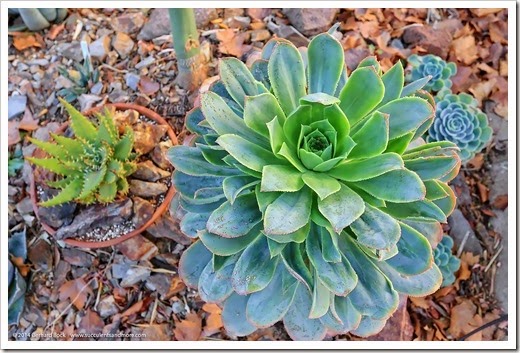 What I love about aeoniums in general—and this species in particular—is the fact that the rosettes look like flowers instead of leaves. Aeonium hierrense has a beautiful bluish cast to its leaves, which are ringed with a faint pink margin. 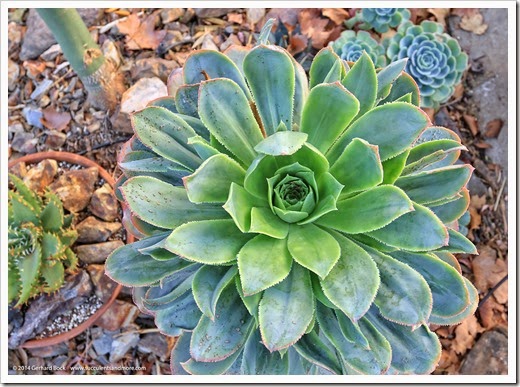 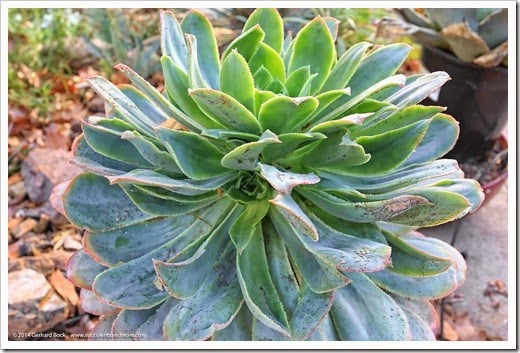 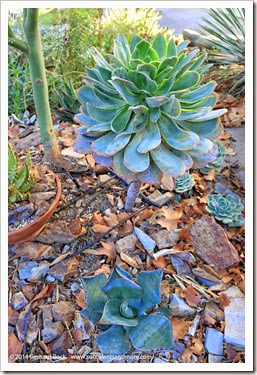 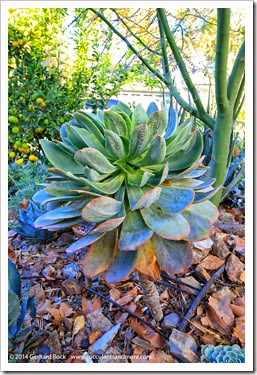 I have another aeonium from Annie’s that looks very similar to Aeonium hierrense. This one is called Aeonium escobarii:

Stunning. Giant. Succulent. Rosette. Do you really need to know more? A superb focal point for a well drained garden, this uber-rare Canary Island (La Palmas) native is fabulous by itself & even more awesome three or more to line a pathway. To 20” tall & 3’ across, the main rosette surrounds itself with huggy babies, looking like a gigantic “Hen and Chicks.” Starry white blooms make up the large pyramidal inflorescence which lasts for months. Discovered only in 2001, it’s said to possibly be a form of A. davidbramwellii. A real treasure, grow it in full sun to part sun in hotter areas & provide well-drained soil with a tinge of occasional fertilizer or compost. Should be a beautiful container subject. 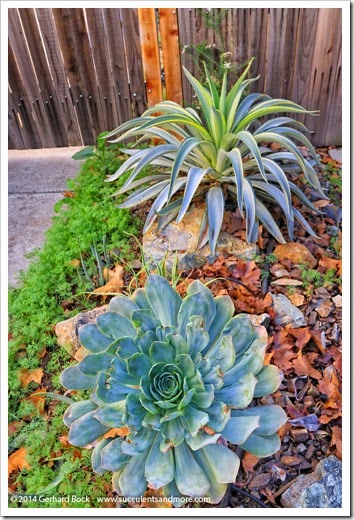 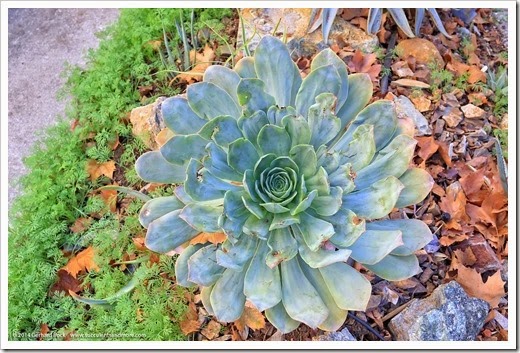 My Aeonium escobarii had some sort of bug living in the center of its rosette last spring. It chewed on the edges of the newly unfolding leaves—you can still see the damage on the outer leaves. Fortunately, the insect(s) didn’t kill the plant or slow it down much. It’s well on its easy to becoming the stunning specimen I saw at the Wave Garden in Point Richmond this past February: 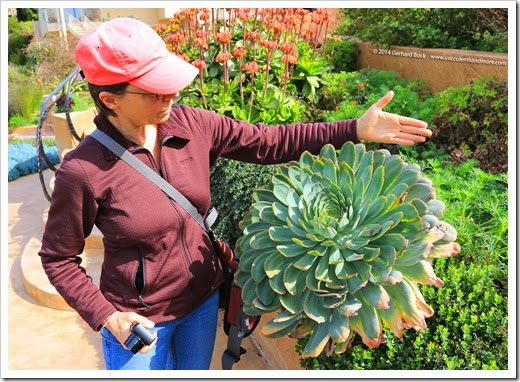 This Aeonium escobarii at the Wave Garden is a true stunner. My friend Ursula who agreed to be in the picture for scale is fairly petite, but that specimen is still a good four feet tall.

aeonium Plant of the Week