The front yard—at least the planting strip outside the 4-foot fence—is continuing the transformation that started when we removed the Pittosporum tobira hedge and created a mounded “desert garden” instead (I’ve consolidated all the posts relating to this project here).

Some of the grasses and perennials that have been in place for years had outgrown their allotted spots, and keeping them away from the sidewalk was getting to be a chore. Plus, the constant whacking required didn’t exactly produce visually attractive results, as you can see in the “before” picture below. 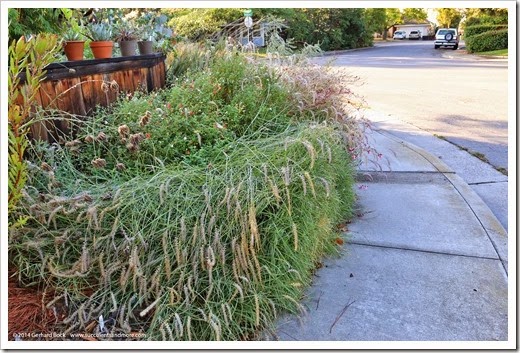 Usually I wait before I have at least a semi-solid plan in my head before I take action, but in this case, impatience won out. In the space of one day (this past Saturday), I removed the ‘Karley Rose’ grass, two Gaura lindheimeri and a variegated Calamagrostis  × acutiflora 'Karl Foerster', and I trimmed back a bunch of perennials towards the back of the border. This freed up an almost shocking amount of space.

Never one to let free space go to waste, I immediately proceeded to fill it with plants that had been looking for a home and added some rocks I’d brought home from my recent trip to California’s Eastern Sierra. I’m quite satisfied with the result. 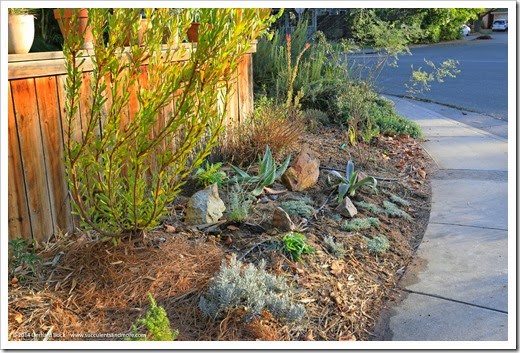 To give you an idea of how much stuff I removed, here’s the yard waste pile: 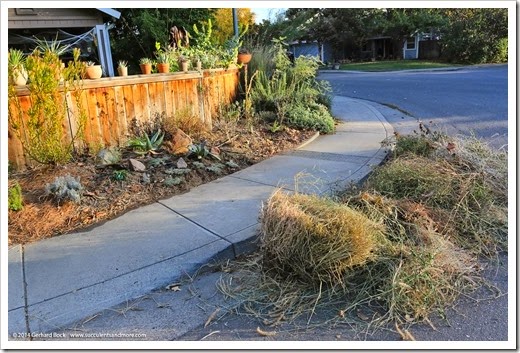 After, with yard waste

Let’s take a look at what I planted: 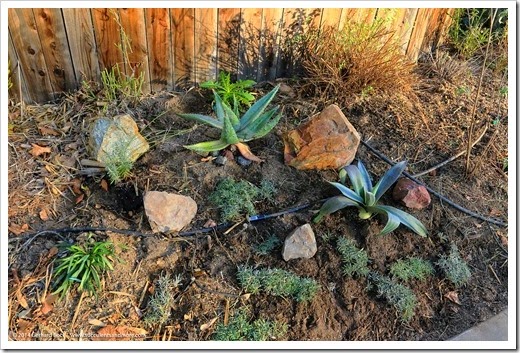 The ‘Edelweiss’ lavender is from a recent sale at Morningsun Herb Farm; the Sonchus congestus (or sow thistle) from Annie’s Annuals’ Labor Day sale; the Aloe marlothii from Arid Lands’ recent aloe and agave sale; the × Mangave ‘Macho Mocha’ from my friend Robin’s garden; and the Dymondia margaratae (or silver carpet) from the mowing strip adjacent to the front lawn (see below).

I also planted an Echium wildpretii × russicum hybrid from Cistus Nursery that originated in the Danger Garden (delivered by Loree herself) and I unearthed two echiums from a February 2014 trip to Annie’s Annuals that had gotten completed covered by the ‘Karley Rose’ grass and the gaura: an Echium russicum and a rare Echium gentianoides. Now that they have been freed, I’m hoping they will thrive (I’m thankful they survived in the first place). 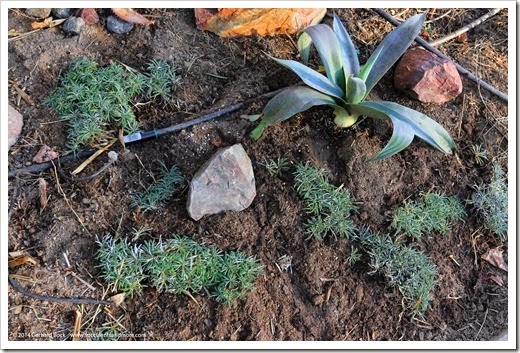 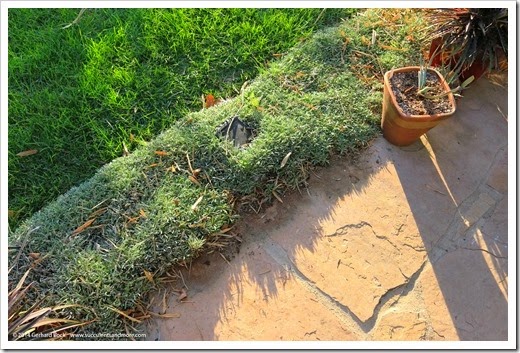 I simply yanked off sections (they came off quite easily) and laid them on top of the moistened soil. They should root quickly, especially since daytime highs are still in the 70s.

I’ve been very impressed with this South African groundcover. It’s proven to be attractive, hardy, drought-tolerant, and resistant to occasional foot and lawnmower traffic. My original post from May 2011 is the fifth most frequently viewed post on my blog, which proves how much interest there is in this lawn alternative. In fact, Dymondia margaretae has become difficult to find in California nurseries, at least in flats and larger quantities. A lot of landscapers and homeowners have jumped on the dymondia bandwagon, a development I applaud whole-heartedly. In fact, we have plans to replace the small square of lawn in the backyard with Dymondia margaretae.

As for our front yard, last Saturday’s project is just another baby step. As I have time and feel like it, I will remove more existing plant material and replace it with landscape-sized succulents and southern hemisphere plants able to withstand our harsh summers.