This morning I visited Cosanti, the 5-acre studio complex and residence of visionary architect and artist Paolo Soleri located in what is now a fancy residential area of Scottsdale. As you may remember from yesterday’s post, Soleri is the man behind Arcosanti, the experimental desert community near Prescott.

Soleri bought the land that would become Cosanti in 1955 and soon thereafter began to build the first earth-cast concrete structures. Soleri’s architectural philosophy was one of frugality: using the cheapest materials and simplest methods possible. Many of the structures began as shaped mounds of earth upon which a thin (typically 3-inch) layer of concrete was poured. When the concrete was fully hardened, the soil underneath the concrete “roof” was dug away, resulting in a structure that is partially or wholly underground. 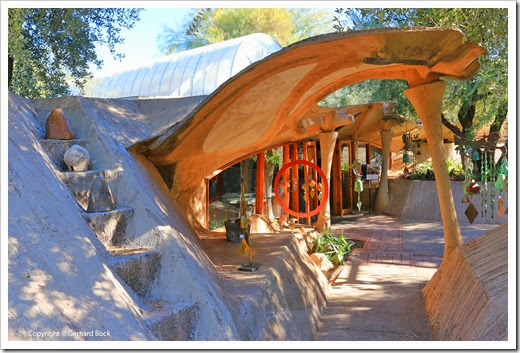 As I entered the Cosanti complex, my first impression was this: the hobbit-holes in the Lord of the Rings transported to an alien planet that vaguely resembles Earth. I felt like a little kid exploring something totally new and exciting. I hope the photos below give you an idea of how strange and exhilarating Cosanti is. (Paolo Soleri, by the way, lived at Cosanti until his death in April 2013.) 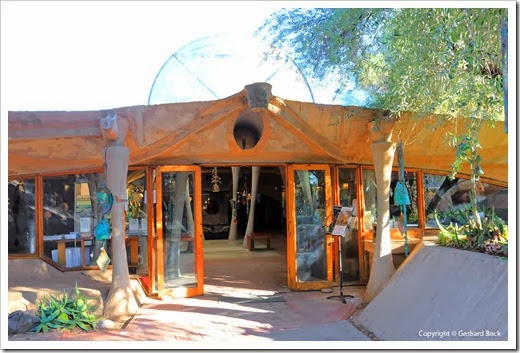 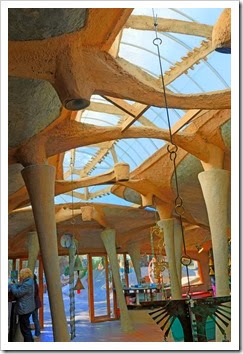 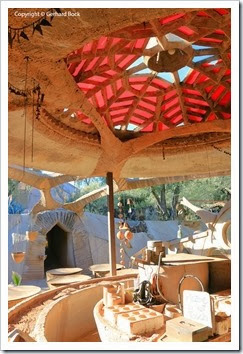 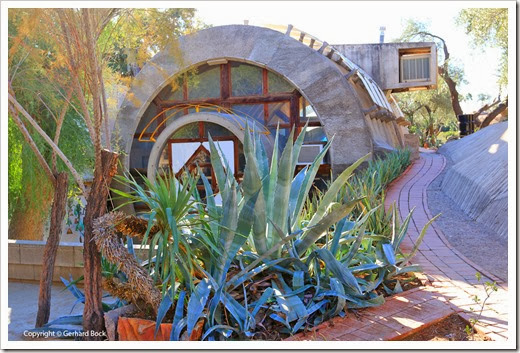 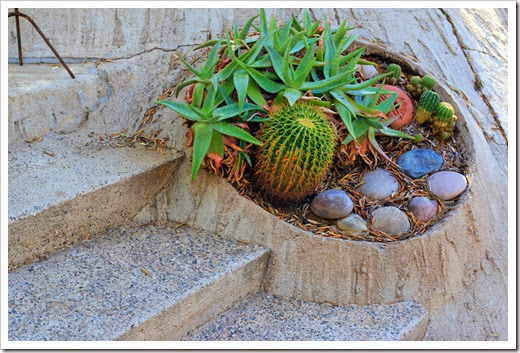 As I mentioned yesterday, financing for Arcosanti comes from the sale of ceramic and bronze wind bells made both at Arcosanti and at Cosanti. Soleri began making wind bells even before he built Cosanti; today this is a thriving business, and the one-of-a-kind custom assemblies are in high demand by well-heeled collectors worldwide (they cost anywhere from $2,000 to $25,000). Fortunately, the foundry also makes a large selection of much more affordable wind bells (check out their web site to see typical designs).

I was there at the right time to watch a pour: 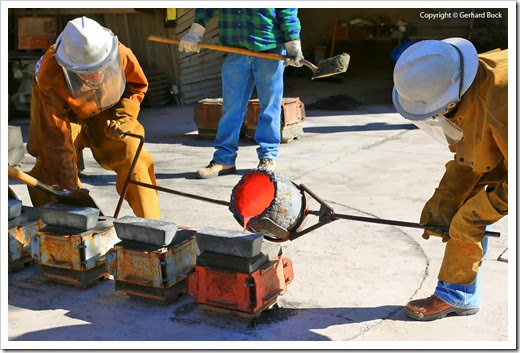 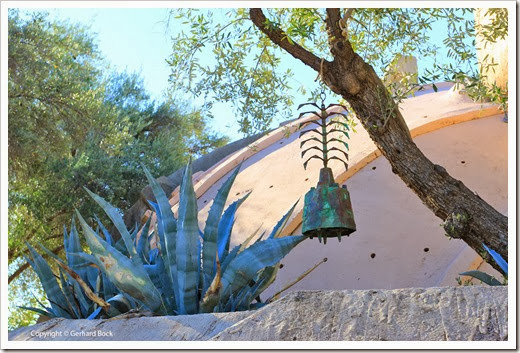 At noon I finally tore myself away from Cosanti and headed back to the Desert Botanical Garden for a final visit.

At $22, admission isn’t cheap, but if you’re a member of a public garden that participates in the American Horticultural Society’s Reciprocal Admission Program, you get in for free. Being a member of the Ruth Bancroft Garden and the UC Davis Arboretum (either membership would have qualified for free admission), I was able to save quite a bit of money. 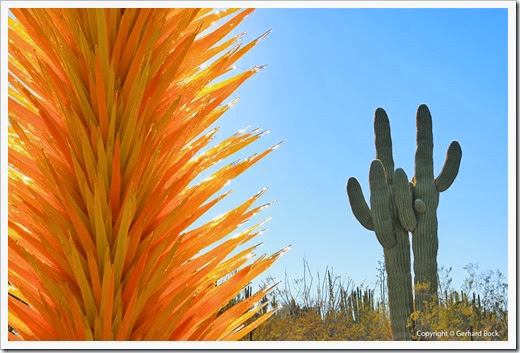 The weather was sunny today with nary a cloud in the sky. I opted to leave my jacket in the car and walk around in a short-sleeved T-shirt. This was fine in the sun, but in the shade I did get a bit chilly. Not surprising because in spite of the bright sun the daytime high was only 55°F. Last night, even protected valley locations were close to freezing; when I got in the car at 7:30am this morning, there was frost on the windshield. Needless to say the rental car company had not provided me with an ice scraper so I had to let the car idle until the ice was melted. 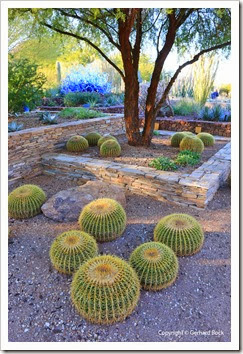 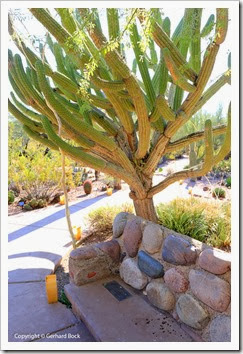 This afternoon I walked through the garden in a counter-clockwise direction, and I ended up finding side loops I had missed last Sunday. I photographed many of the same plants as before, but I’m much happier with today’s pictures. It’ll be a few weeks before I’ve finished going through the 1000+ photos from the Desert Botanical Garden, but I know there will be at least three separate posts: a general overview, a post about agaves (what else!), and one about Noches de las luminarias. 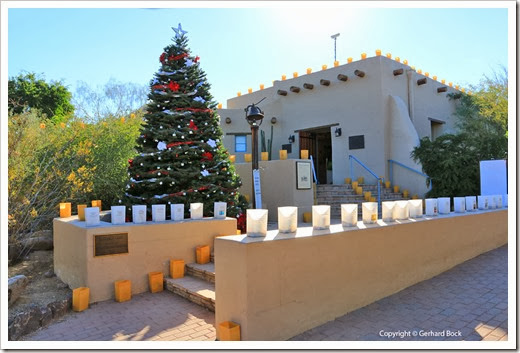 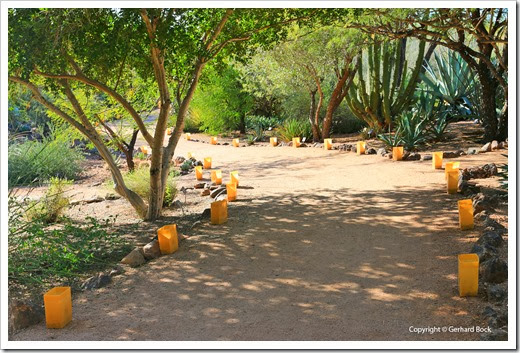 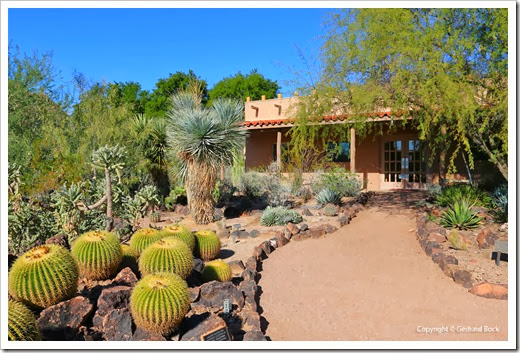 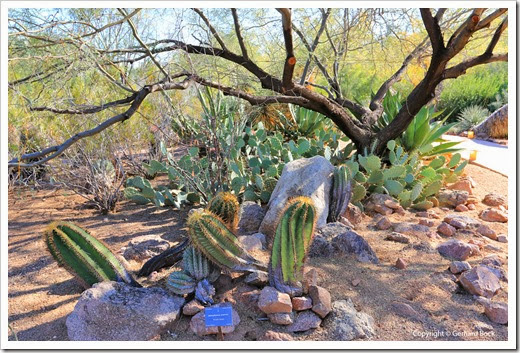 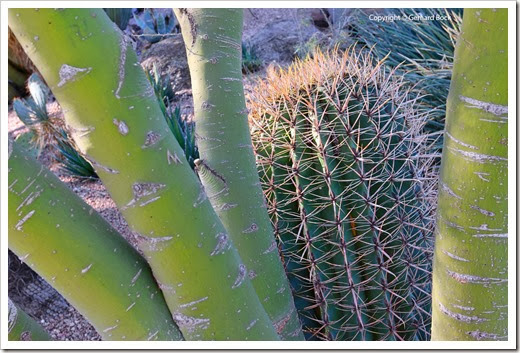 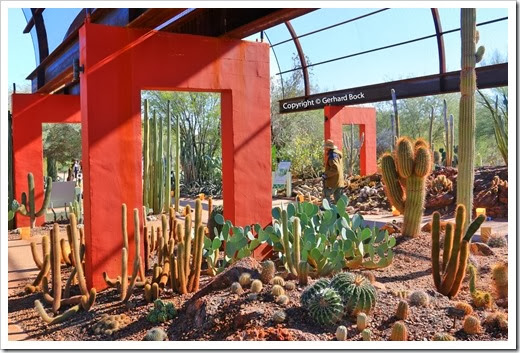 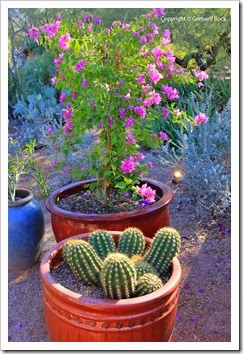 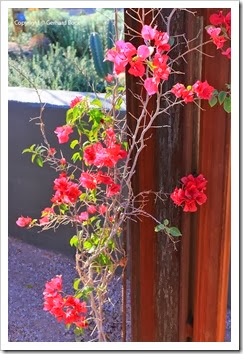 I have to give big kudos to the volunteer docents at the DBG. There are so many of them, you never have to go far to find somebody who can answer your questions. In addition, I really appreciated the many water fountains throughout the garden. While I recommend you bring your own water, you won’t die of thirst if you forget. Visiting in the winter as I did, it’s easy to forget that summers are brutal here, with heat stroke being a real threat.

When the Desert Botanical Garden closed at 4pm it was time to leave. Even though the Phoenix airport—imaginatively named Sky Harbor—is only 6 miles away, it took me the better part of half an hour to get there. The traffic was horrible, even worse than yesterday. I have a feeling Phoenix residents are no strangers to freeway gridlock.

I feel sad that my week in Arizona is over, but I have a wealth of memories, thousands of photos, and my plants to sustain me through the winter. Speaking of plants: I shipped my purchases via FedEx Ground this morning; they should arrive on Tuesday. Shipping was only $17 for a large box that weighed close to 18 pounds. That sure beats trying to cram plants into a suitcase!