As the days are getting shorter, many plants are beginning to wind down for the year. However, there are others who spent the summer in dormancy and are now waking up. I have four of these summer sleepers sitting on the front porch and I’ve been watching for signs of activity. My patience has been rewarded as all four them are now showing new growth. It’s great seeing plants leaf out now when most others are doing the opposite.

Let’s take a look at these four unusual plants. All four of them are from the southern hemisphere (South Africa in this case).

The first one is Tylecodon dinteri, a succulent from South Africa. I bought it last fall at the Ruth Bancroft Garden when it was in full leaf. 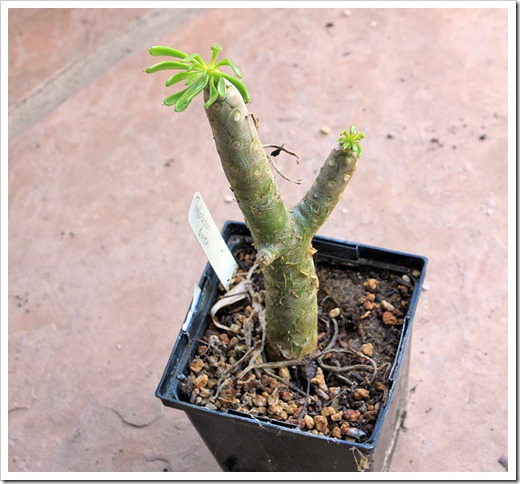 For the taxonomy purists out there, Tylecodon dinteri isn’t a valid name according to some sources. To clarify, Brian Kemble, curator at the Ruth Bancroft Garden, said on XericWorld.com:

Tylecodon dinteri is indeed supposed to be a natural hybrid between T. paniculatus and T. wallichii. The leaves are narrow like wallichii, but the trunk is peely like paniculatus, rather than tuberculate like wallichii. I saw what appeared to be this cross in nature, southwest of Laingsburg in the Western Cape. 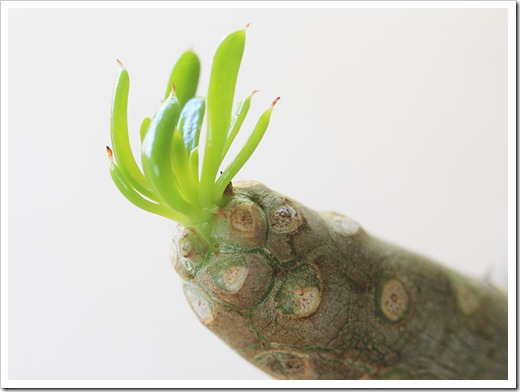 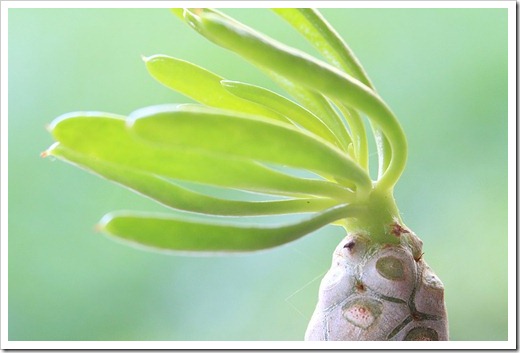 Below is a photo of a mature Tylecodon dinteri at the Ruth Bancroft Garden. I think it’s a very cool plant! 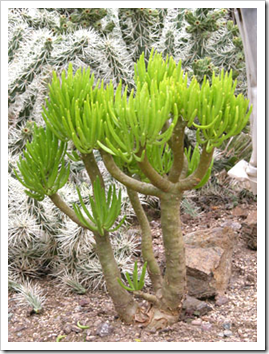 The next one is Dioscorea elephantipes, or elephant’s foot. This strange caudiciform (caudex-forming plant) can live up to 70 years in cultivation. It’s been reported that in the wild the caudex can grow to a height of 7 ft. and a weight of 800 pounds! Mine is less than three inches across so I have a long ways to go before I need to worry about space. 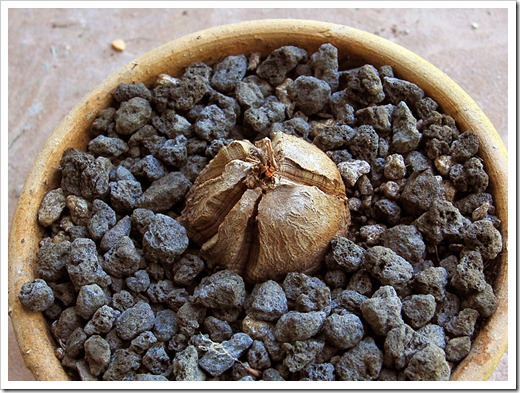 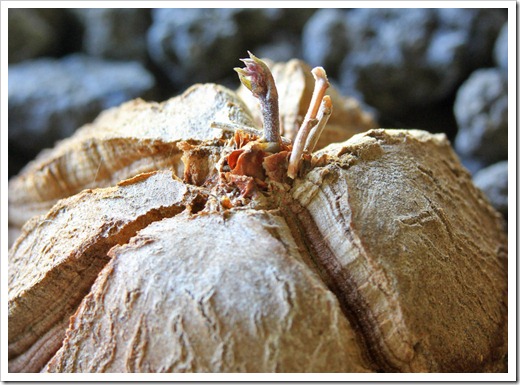 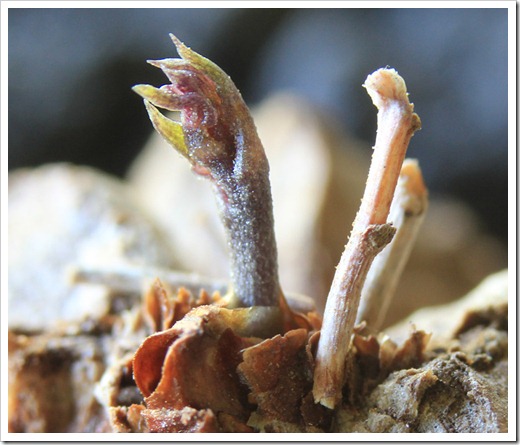 The shoot coming out of the caudex is actually a vine. In March, it looked like this: 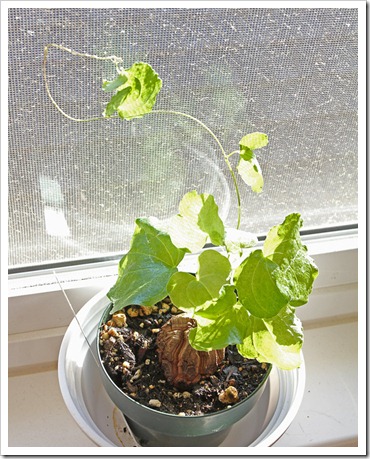 My own Dioscorea elephantipes in March

And here is a photo of a much older and larger elephant’s foot: 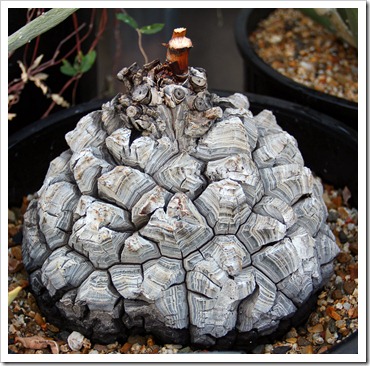 The final two summer sleepers I want to talk about in this post are deciduous bulbs in the genus Veltheimia, commonly called sand lilies. As you can see from the photos below, their inflorescences resemble smaller kniphofias and are quite striking. 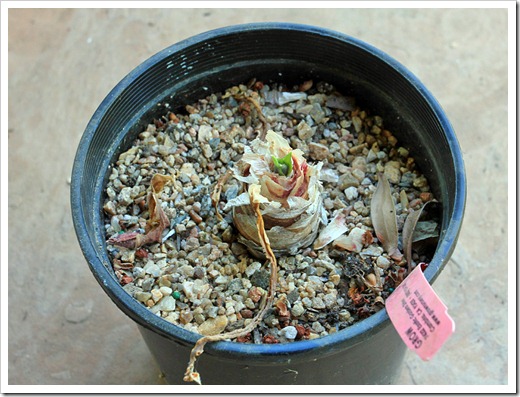 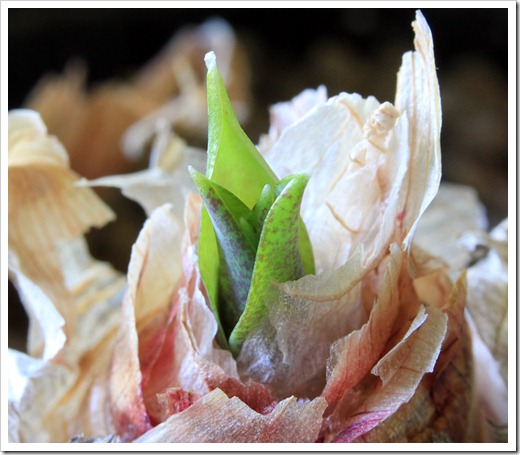 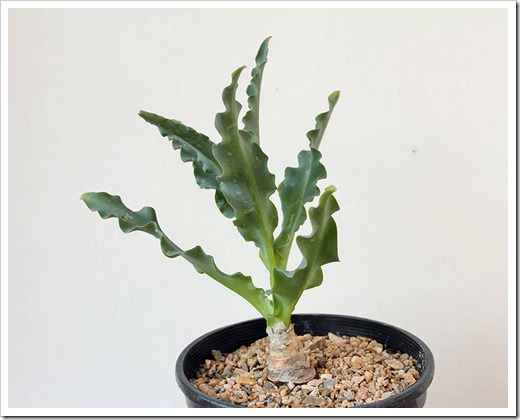 My own Veltheimia capensis last fall 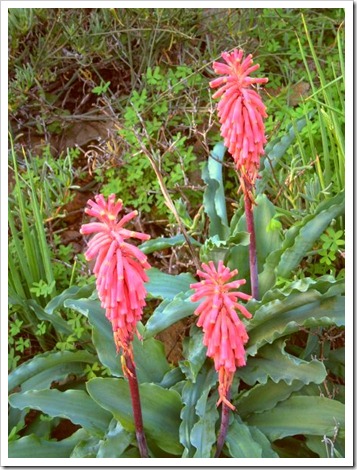 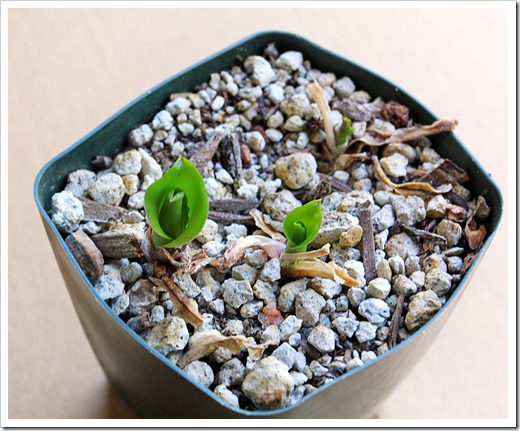 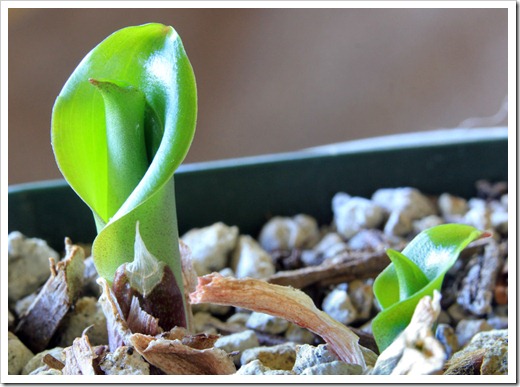 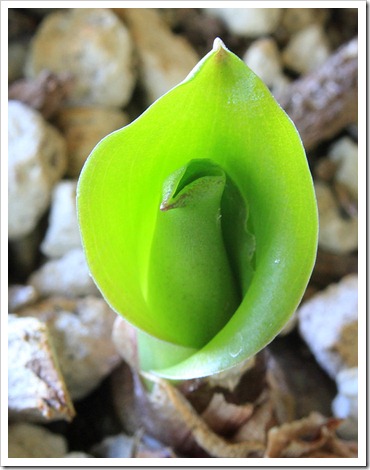 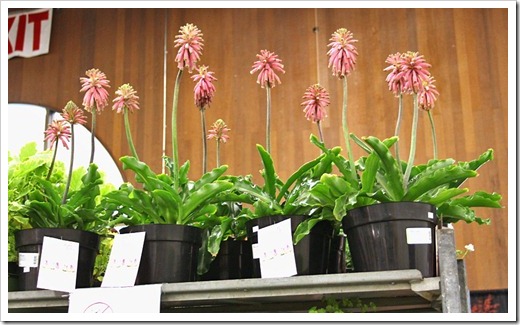 As these sand lilies multiply, I will transplant them into larger bowls, much like I would with tulips or other spring-blooming bulbs. That way I can move them into the full sun during late fall and winter and keep them dry and shaded in the summer when they’re dormant.

I hope you enjoyed this look at four uncommon plants. I love collecting these oddities and finding out more about where they come from and how they grow in the wild.