In other parts of the country and the world, fall has arrived. Here we’re expecting 94°F today and fall is just a word on the calendar. While I love early summer when heat-loving plants really get going, late summer is one of my least favorite times of year. The garden looks tired and I’m ready for the change that autumn brings. Not only a change in temperature and weather but also a change in motivation—from the can’t-be-bothered doldrums of late summer to the can’t-wait-to-get-started eagerness I typically feel in October.

I should add that late September and October are actually great gardening months for us. I love to put new plants in the ground then because they have a six months to get acclimated before the heat returns. And this year I plan on doing quite a bit of planting and renovating because many areas in the front and back yard need an overhaul.

Let’s take a look at a few of these spots.

The first is this bed in the back yard. It’s what we see when we look out the kitchen window. It was once dominated by perennials such as echinaceas, coreopsis and salvias but in the last few years a rogue Salvia guaranitica ‘Black and Blue’ has taken over and crowded out many of the other perennials.

I removed the salvia last weekend to give the existing plants more sun, especially the Grevillea ‘Superb’ and the Leucadendron salignum ‘Winter Red’ I planted last spring. These two shrubs should fill their spaces in the next year or two so all I need is more foreground interest. I’ll definitely add more echinaceas for summer flower but also something that looks good year round. Maybe a ground-cover sedum.

The next sore spot is to the left of the bed above. It’s a variegated Fatsia japonica that got eaten alive by some pest (caterpillar?) this past spring. It has not grown a new leaf since then and looks terrible. I’m tired of waiting so I’ll remove it and replace it with something else. Any ideas? This area is in the shade most of the time, with an hour of mottled sun in the afternoon. 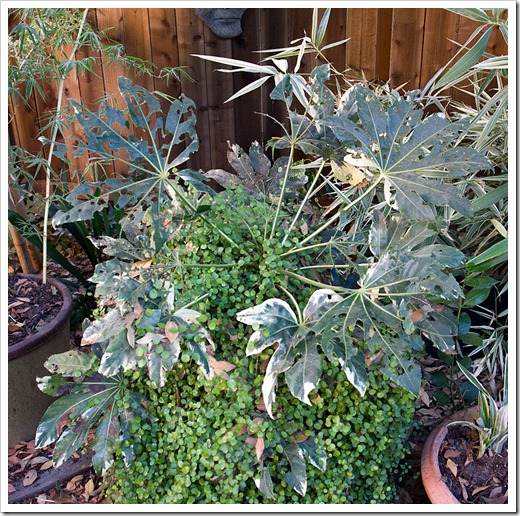 Just to the left of the fatsia is a potted Fargesia dracocephala ‘Rufa’. It almost died when our sprinkler/drip system was out of commission for a week early this summer due to a GFI switch that had tripped. Yes, there is new growth so it’s not a lost cause but this bamboo has outgrown its pot anyway so now’s a good time to rehome it. It’ll go to my in-laws where it’ll be put in the ground; it’ll be much happier there. I need a replacement plant that is more drought-tolerant. A nursery visit will be in order soon for some much-needed inspiration. 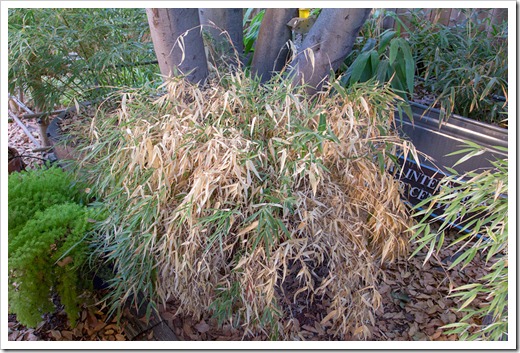 Now let’s look at some sore spots in the front of the house. This is the “tropical bed” next to the front porch. I’ve never been completely happy with this raised bed and I’ve decided to make major changes here. The giant elephant ear (Alocasia macrorrhiza) will stay but all the gingers will be lifted, except for the variegated shell ginger (Alpinia zerumbet ‘Variegata’) in the corner (you can’t even see in the photo below). This raised bed needs plants that are no more than four feet tall otherwise the entire corner of the front yard looks too crammed. 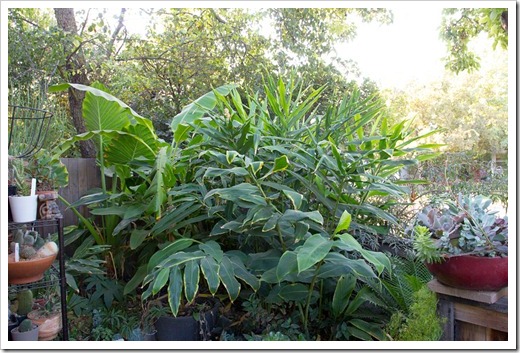 In addition, the time has finally come to remove the remaining miscanthus outside the front yard fence. They are simply too massive and out of proportion with the rest of the plantings. The miscanthus you see in the next photo will be replaced with the red bird of paradise (Caesalpinia pulcherrima) I just bought from Yucca Do Nursery. 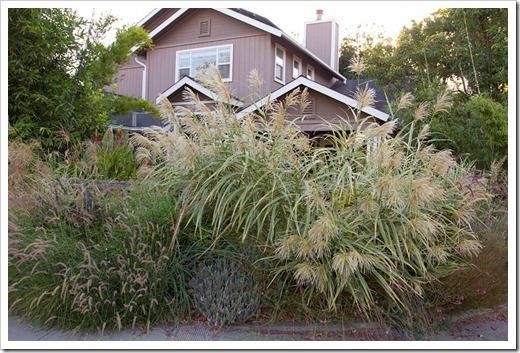 One of the biggest and peskiest gardening challenges ever are the suckers from a Bradford pear tree that was removed over three years ago (it was in the spot now occupied by our Bambusa oldhamii). I’ve written about this topic before; Outlaw Gardener suggested a Triclopyr-based product like Brush-B-Gon, and that’s exactly what I will do. I have high hopes that this will solve this problem once and for all. 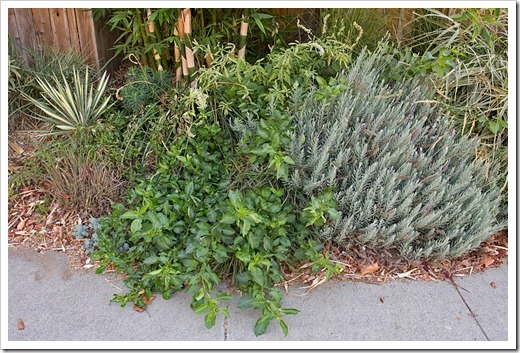 All of these issues have been nagging me all summer. But as soon as fall arrives in our latitudes, I will tackle them with vigor.