- November 11, 2018
A trunk full of plants always makes my heart beat faster. Especially if it's our car filled with plants! 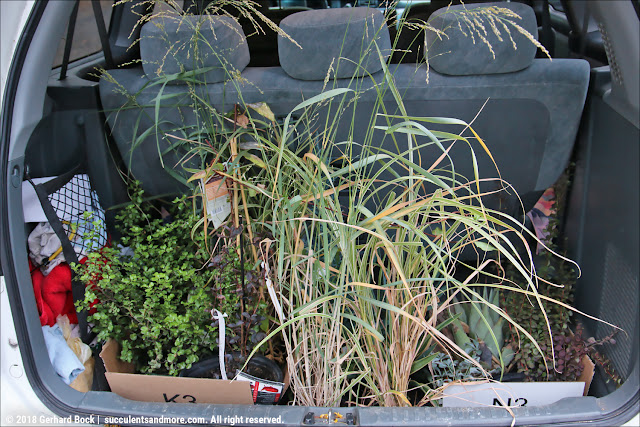 These plants, however, weren't for our own garden. Instead, they went on a 3½ hour car ride into the mountains, bound for what I jokingly call our northern garden expansion, a.k.a. my mother-in-law's 2+ acre property in Mount Shasta.

Of the 2+ acres, no more than ½ acre is landscaped. The rest are native trees, mostly Western redcedar (Thuja plicata). In other words, there's lots of room to broaden the plant palette!
The plants that went to Mount Shasta came from a variety of sources: some from the clearance rack of Lowe's (always a good place to look, especially in the fall), others from various plant sales I'd attended in recent weeks, and a few from my trip to Portland in September. There's even a plant or two from Annie's Annuals!

Mount Shasta (elevation 3,500 ft.) is in USDA hardiness zone 7b, which translates into an annual extreme minimum temperature of 5°F. It has gotten colder on occasion (the record low is -10°F in December 1990), but the average rarely dips below 20°F. 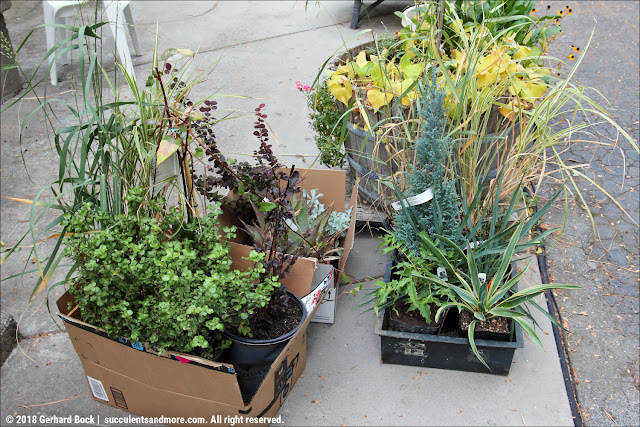 Here are all the plants we took to Mount Shasta:

Most of the plants went on the hill in front of the house, not only because it's visible from the living room but also because it's one of the sunniest spots on the property. In the photo below, each purple rectangle represents a newly added plant. The bowling balls are yard sale finds dating back 10+ years. My father-in-law enjoyed them. 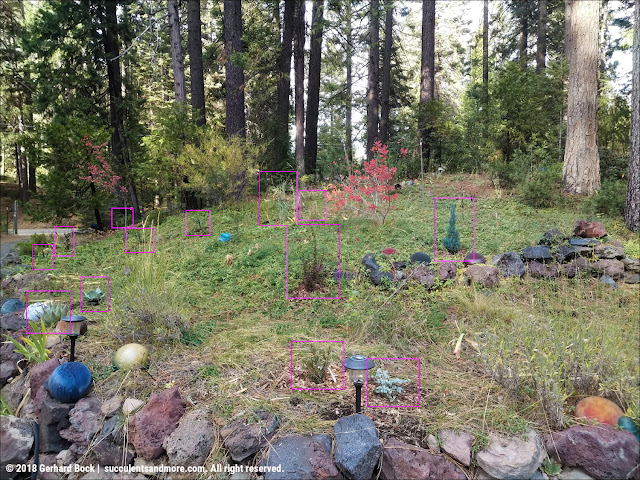 The plants are small and the hill is large so there's no wow factor at the moment. But give it time (and keep your fingers crossed).

This makes gardening on a large property a lot easier: 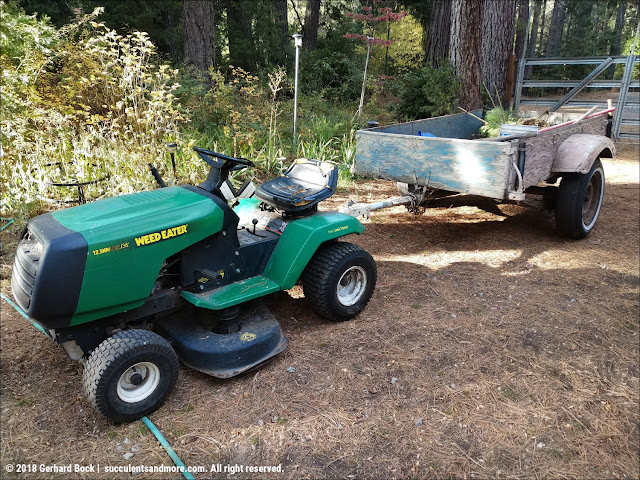 Looking towards the barn: 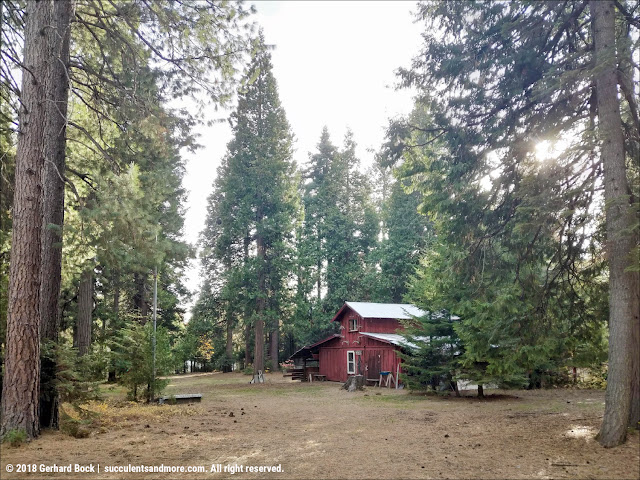 An area closer to the house that needs some TLC (and new plants): 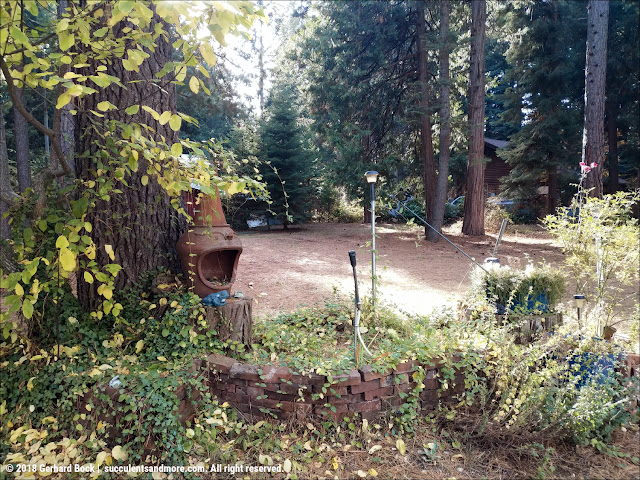 The lawn and the back of the house (the hill is behind it): 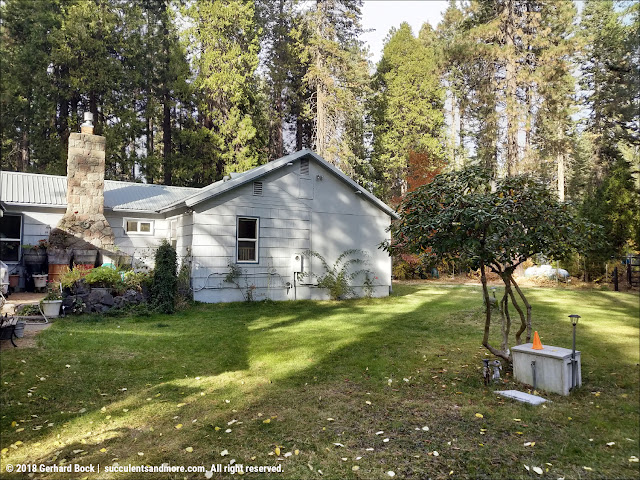 This spot calls out for a raised bed: 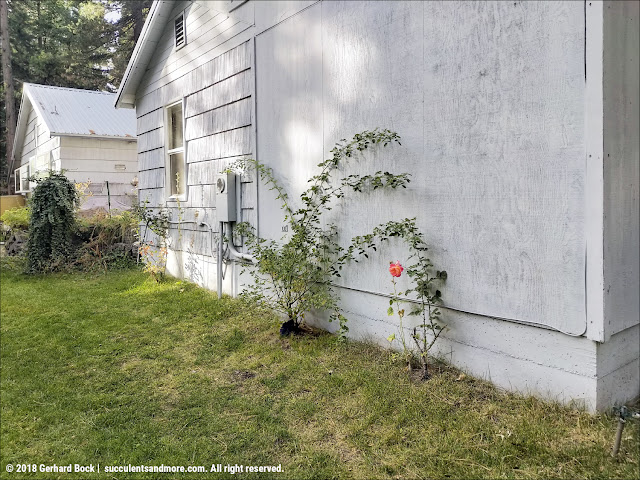 There are literally hundreds of trees on the property, most of them Western redcedar: 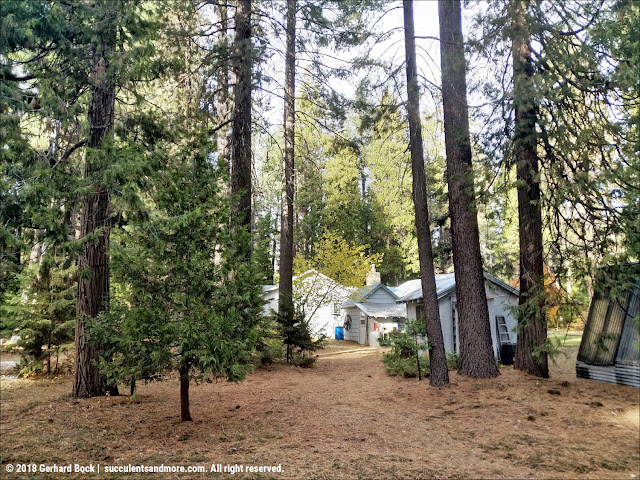 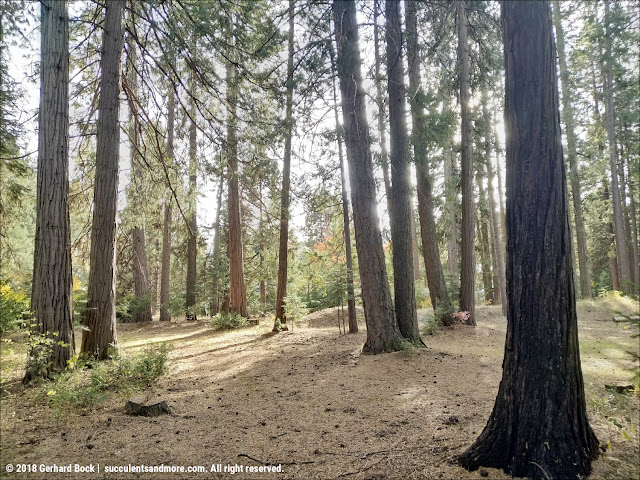 A long berm towards the back of the property, created from excavated dirt and composted wood chips: 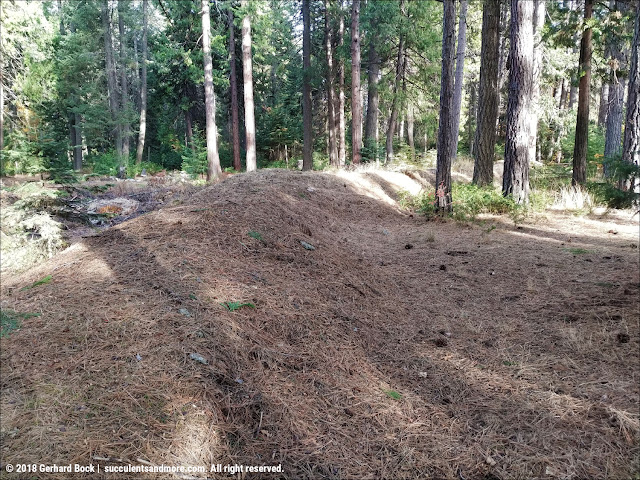 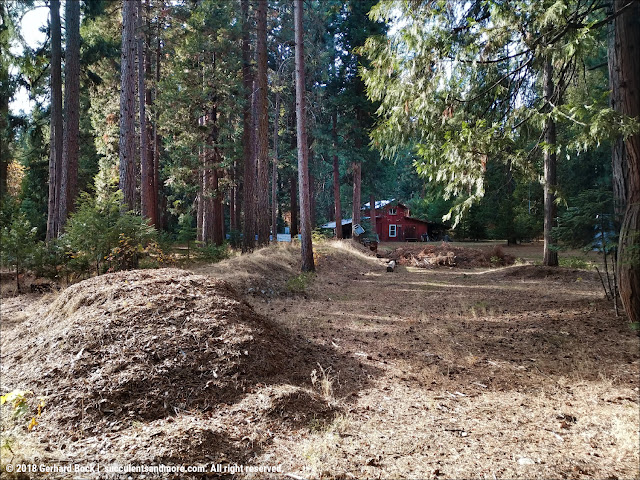 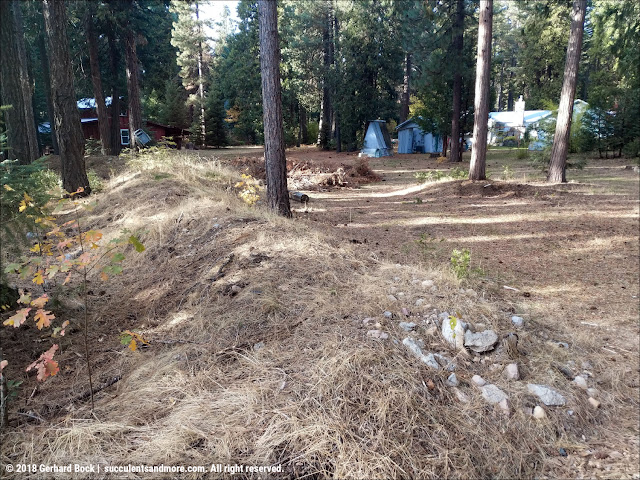 More room to plant along the fence line. Something shrubby to block the view. 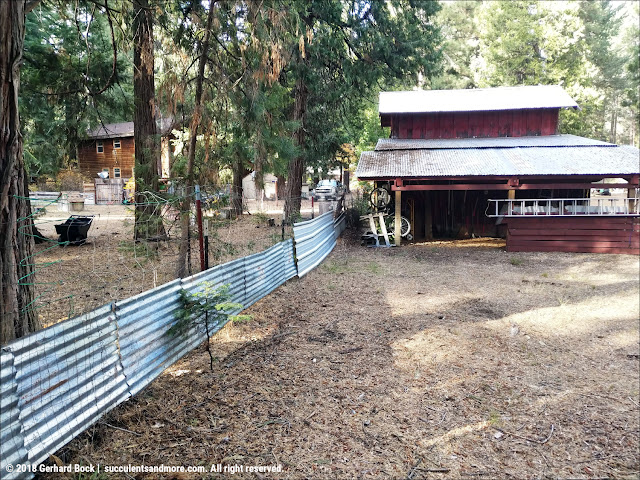 This is an Arizona cypress I got for my mother-in-law (Cupressus arizonica 'Blue Ice') earlier in the year. The new growth is the icy blue I so love: 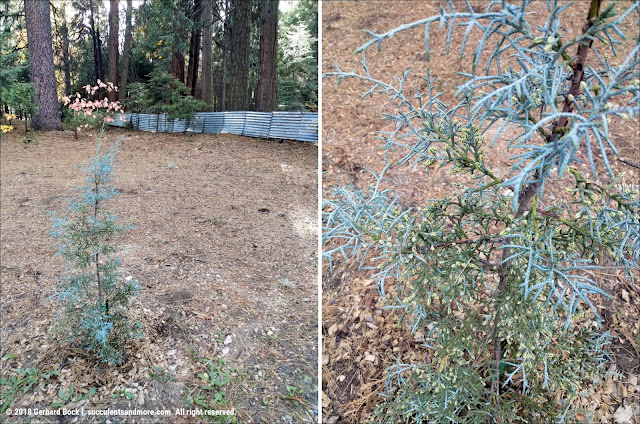 Finally, a look at the bamboos we planted years ago. The very first post on this blog, dated October 10, 2010, was entitled “Moving black bamboo.” It described how we planted a Phyllostachys nigra 'Punctata' from a half-barrel in front of the house into the backyard. My father-in-law was still alive, and he used his backhoe to dig the hole—child's play!

Fast-forward 8 years. This is what the black bamboo looks like now:

Yes, these are running bamboos, and they can be fairly aggressive if the conditions are right. We didn't install any rhizome barrier because we knew that there is a natural barrier at my in-law's place that would prevent rampant spread: water, or rather the lack of it. Each clump has grown to the edge of its irrigation zone but not beyond. The reason is simple: It typically doesn't rain from May until October, i.e. during active growth season. In addition, the soil is so porous that it dries out quickly to a depth of at least a foot—about the level where the bulk of the rhizome mass is found. This has proven to be a very effective strategy for restraint.

Take a look at this November 2012 post. While the bamboos have bulked up since then, they haven't grown nearly as much as you would think.

Arguably the bamboo that had to overcome the biggest challenges is Phyllostachys vivax 'Aureocaulis'. As I mentioned in this July 2011 post, voles (or moles?) had feasted on its roots, almost killing it. It pulled through, but its growth was set back by years. And yet, here it is, 7 years later, still alive, its yellow culms as beautiful as ever.

A few more bamboos in the backyard:


The bamboos that have fared best are the three Fargesia dracocephala 'Rufa' planted along the edge of the lawn, quite possibly because they get a bit of overspray:

Three more bamboos to show, all runners in the genus Phyllostachys and all contained within their respective irrigation zone. The largest is Phyllostachys angusta, planted in the summer of 2010 from a 15-gallon can. It was lush and beautiful then, and it still is—except it's significantly larger.

In the photo below it's on the right. The straggly thing on the left is Phyllostachys aureosulcata, planted at the same time as a 1-culm division. It has grown, but it's eons away from living up to its potential. To really thrive it clearly needs a lot more water than it's getting (and will ever get). 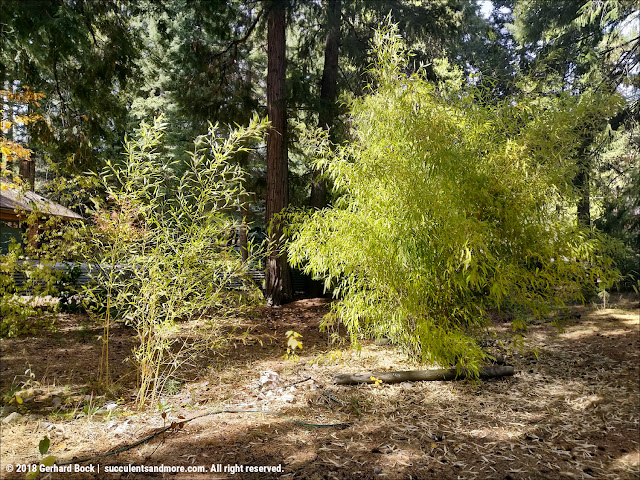 The final bamboo is Phyllostachys nigra 'Henon' just outside the fence that surrounds the backyard (so technically it's in the front yard). The culms are about 12 ft. tall now and it's a welcome presence but again nowhere near as large as you'd expect it to be after 7+ years in the ground. The reason is the same: not enough water. Still, I like the way it looks, and I'll be happy if it continues to creep along like that. 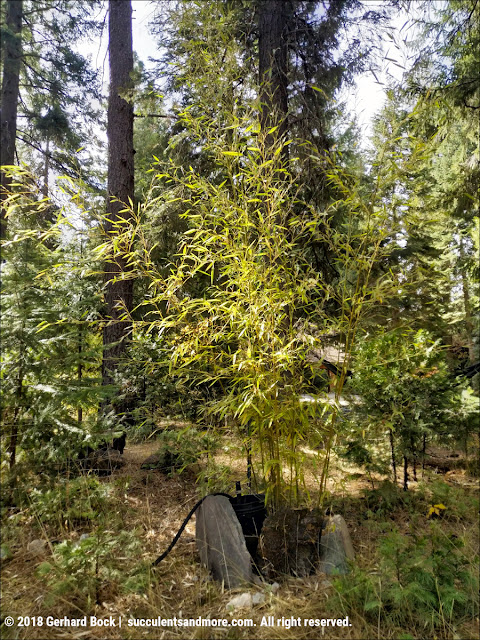 Another trunk full of plants is ready to head north. I made full use of the 40% member discount at the UC Davis Arboretum clearance sale on November 3 and bought beauties like Pacific madrone (Arbutus menziesii), strawberry tree (Arbutus 'Marina), western mountain mahogany (Cercocarpus betuloides), California coffeeberry (Rhamnus californica 'Leatherleaf'), dwarf chaste tree (Vitex agnus-castus 'Blue Diddley') and a lot more. We may be able to put them in the ground at Thanksgiving, but that's awfully late for planting in Mount Shasta. It all depends on the weather. If it doesn't happen now, the plants will overwinter in Davis and get planted in Mount Shasta in the spring.

© Gerhard Bock, 2018. No part of the materials available through www.succulentsandmore.com may be copied, photocopied, reproduced, translated or reduced to any electronic medium or machine-readable form, in whole or in part, without prior written consent of Gerhard Bock. Any other reproduction in any form without the permission of Gerhard Bock is prohibited. All materials contained on this site are protected by  United States and international copyright law and may not be reproduced, distributed, transmitted, displayed, published or broadcast without the prior written permission of Gerhard Bock. If you are reading this post on a website other than www.succulentsandmore.com, please be advised that that site is using my content without my permission. Any unauthorized use will be reported.
bamboo fall planting Mount Shasta new plants Succulents and More North
Location: Mt Shasta, CA 96067, USA