Creating a demonstration garden for the Sacramento C&SS

- November 14, 2018
The Sacramento Cactus & Succulent Society (SCSS) meets every 4th Monday of the month at the Shepard Garden and Arts Center (SGA&C) on McKinley Boulevard. The two are almost the same age: The SCSS was founded in 1960, and the SGA&C was built in 1958 by the City of Sacramento. If you want to see what it looks like, check out this photo gallery.

According to its website, the SGA&C is "an outstanding example of mid-twentieth century architecture:"


Most notable of its exterior features is the dramatic roof line that combines an A-line form with that of a "butterfly" style appendage that extends over the patio. This in dramatic contrast to its surrounding neighbors which are noted for the popular styles of architecture from the 1920s, 30s and 40s. The Center, as was common in the late 1950s, utilizes stone and wood with flair and exuberance. One of its more notable features on the interior is the massive two-sided fireplace made of flagstone and terrazzo, with a glass mosaic on one side and a huge copper vent on the other. The broad hearth serves as seating, making this feature the heart of the building.

The "broad hearth," incidentally, is usually the place where I sit during presentations.

As one of the plant clubs meeting at the SGA&C, the Sacramento Cactus & Succulent Society was recently asked to participate in a re-beautification project: Each club is given an area outside the Center to create a demonstration garden that reflects the club's interests. Here is our area: 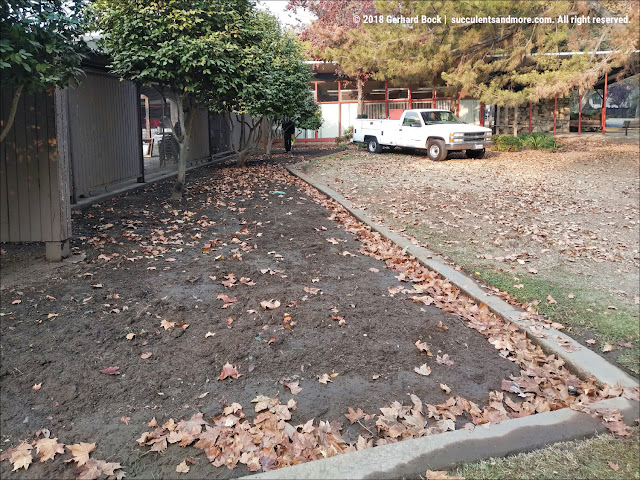 Last Saturday, SCSS volunteers met to get started on our demonstration garden.


As you can see in the photo above, the Center had cleared the area for us. I believe it had been mostly azaleas and English ivy (Hedera helix). In addition, SCSS president Mariel Dennis had worked on removing more ivy to the left but it was very slow going. Ivy has its place, but I pity the people who have to rip it out decades later.

The first step was to lay heavy-duty weed control fabric to prevent the ivy from coming back, should any of it be left in the soil. The small trees left standing are camellias; they're laden with flower buds right now. 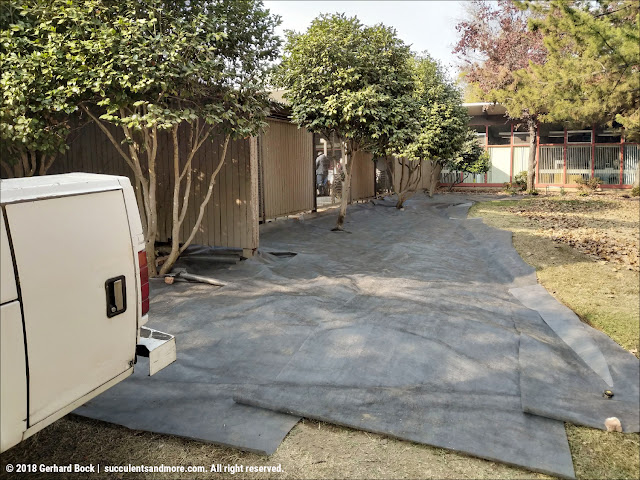 We had just finished laying the weed barrier when the truck from Cascade Rock showed up. Mariel had ordered 16 cubic yards of loam mixed with ⅜" red lava rock as well as 5000 pounds of boulders. Three big piles for us to move! 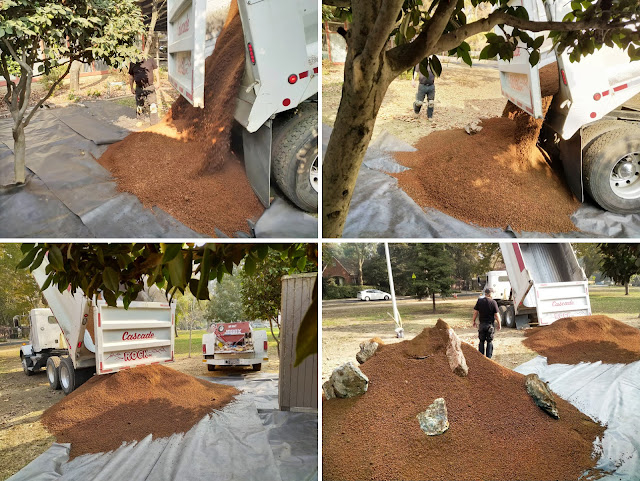 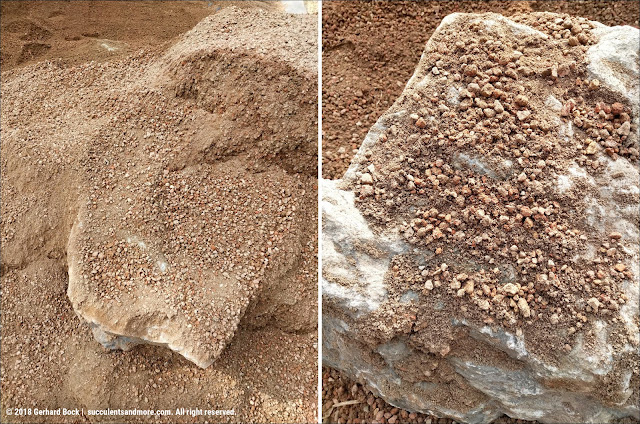 The next five hours were spent distributing the soil to create planting mounds. 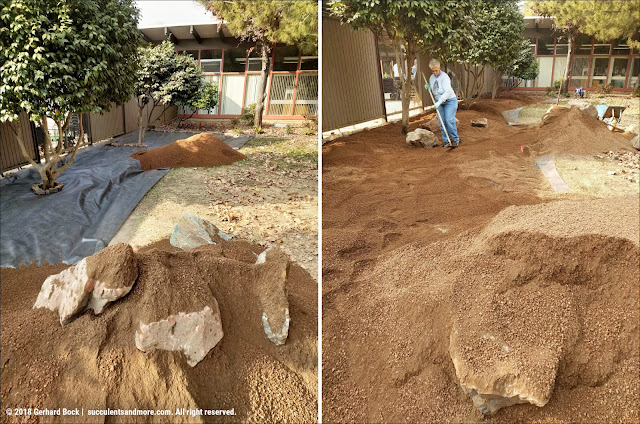 I don't know how many wheelbarrow loads I moved but my muscles were aching at the end of the day. 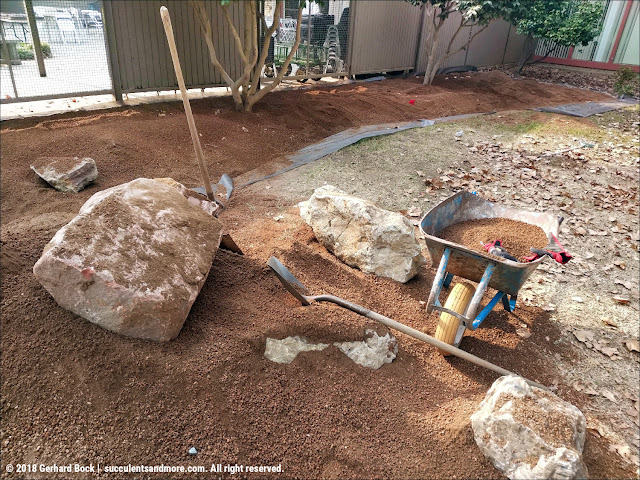 Smoke from the hellish Camp Fire in Paradise, about 90 miles north of Sacramento, cast an eerie light and pushed the air quality towards the unhealthy range. It probably wasn't the best day to be working outside. 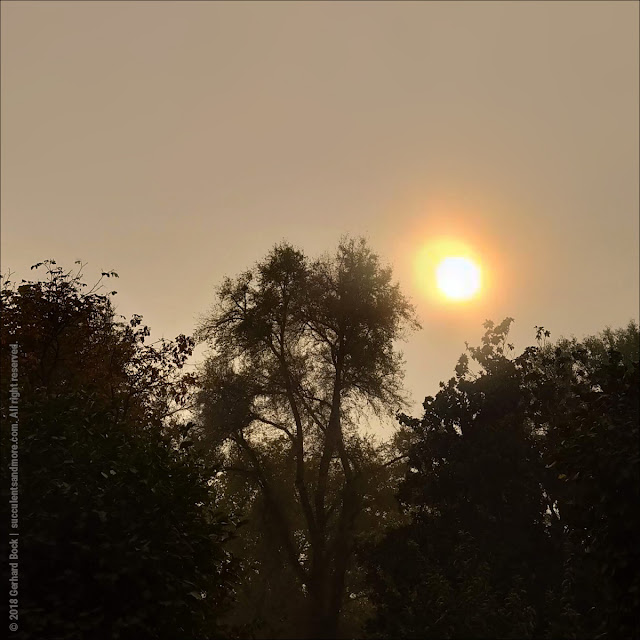 The rocks were placed by Mariel's handyman and his son. Fortunately, they were able to do it without needing help from us feebly-bodied volunteers (Mariel, JoEllen, and me). 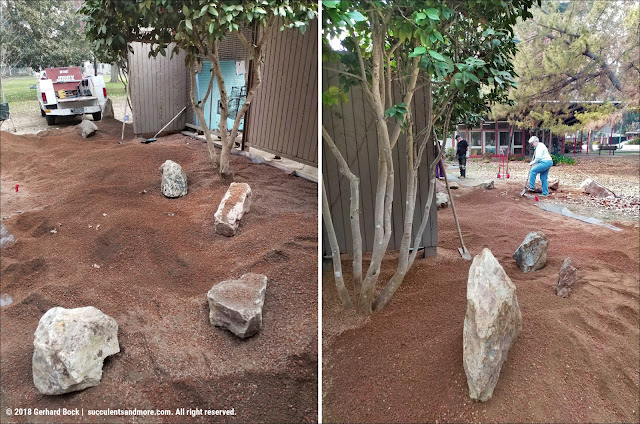 Planting was the most enjoyable part of this project, as it always is. Ironically, it only took 30 minutes, compared to the 5+ hours of moving dirt. 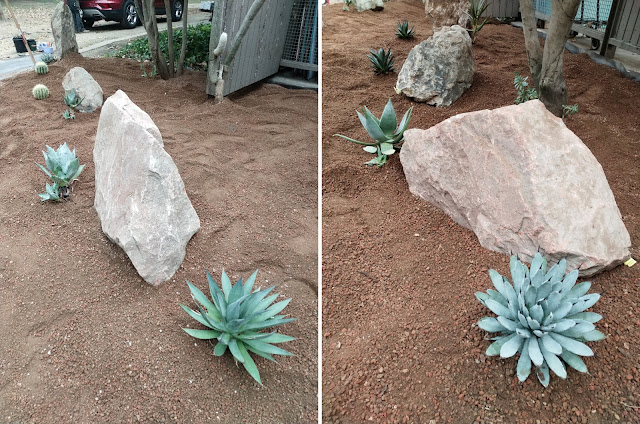 We planted right on top of the weed control fabric. I doubt the roots will be able to penetrate it, but there is plenty of soil to sustain the plants (it's as much as 3 ft. deep in places). Irrigation is from three pop-up sprinklers along the perimeter of the bed. They were sufficient to keep the azaleas, camellias and ivy going all these years and should be perfectly sufficient for our purposes. 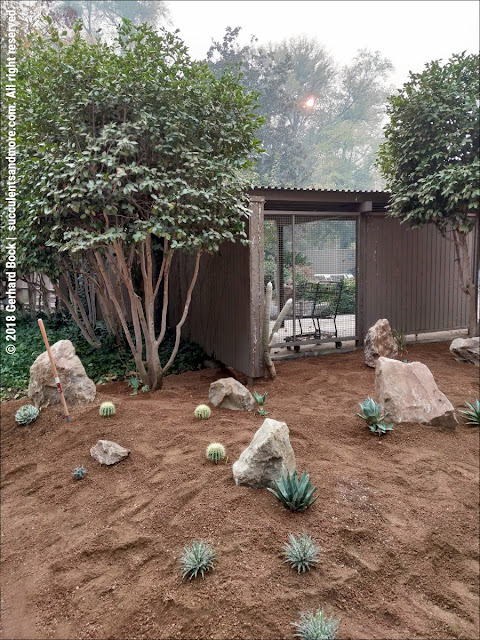 All three of us (Mariel, JoEllen and me) had brought plants from our own garden. In addition, Mariel had bought a couple of dozen plants at Poot's Cactus Nursery—a big thanks to Poot's for giving us a discount. 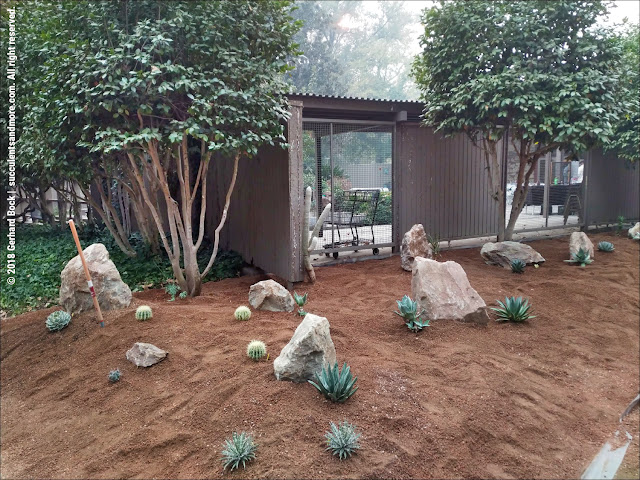 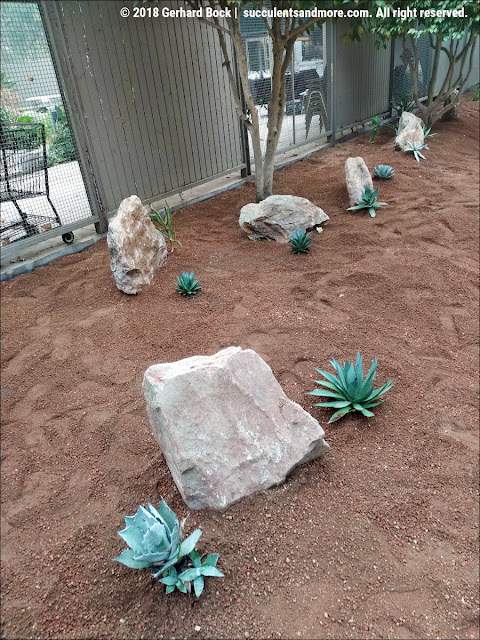 There is still plenty of room left for additional plant donations. Now that the groundwork has been laid, I think we'll see more interest from SCSS members.

Our biggest concern at the moment is potential vandalism or theft. I'm keeping my fingers crossed that passers-by will enjoy what we did without helping themselves to our plants.


© Gerhard Bock, 2018. No part of the materials available through www.succulentsandmore.com may be copied, photocopied, reproduced, translated or reduced to any electronic medium or machine-readable form, in whole or in part, without prior written consent of Gerhard Bock. Any other reproduction in any form without the permission of Gerhard Bock is prohibited. All materials contained on this site are protected by  United States and international copyright law and may not be reproduced, distributed, transmitted, displayed, published or broadcast without the prior written permission of Gerhard Bock. If you are reading this post on a website other than www.succulentsandmore.com, please be advised that that site is using my content without my permission. Any unauthorized use will be reported.
demonstration garden landscaping rocks Sacramento Sacramento Cactus and Succulent Society SCSS water-wise landscaping xeriscaping
Location: 3330 McKinley Blvd, Sacramento, CA 95816, USA