- November 17, 2018
The smoke from the hellish Case Fire in Paradise, about 90 miles north of here, has been making our air hard to breathe all week. But that's a minor annoyance compared to what those in the middle of it are going through. The flames got to within a few hundred yards of my brother-in-law's property outside of Chico, but fortunately they were spared. So many haven't been. The loss of life in Paradise has stunned Northern California and, with many hundreds still left unaccounted for, will only go up. The destruction of virtually an entire town is simply unfathomable. My thoughts continue to be with the thousands of people affected by this catastrophic wildfire. 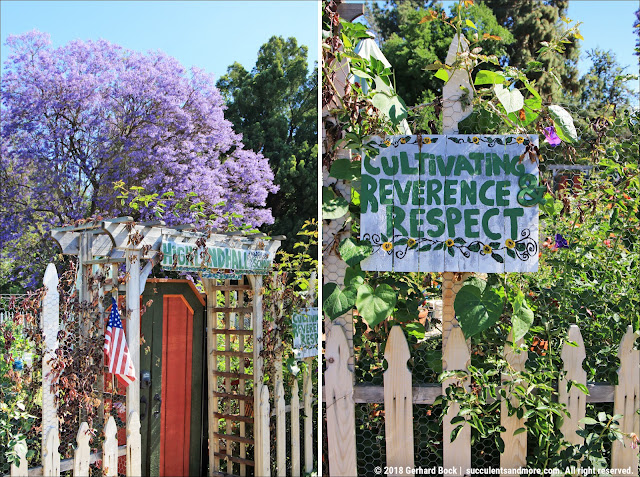 To counteract all the ugliness, I want to show you some beauty I found in Southern California in early June. We spent the first night of our trip in in Sherman Oaks, and as I was futzing around on Facebook, I noticed that the Los Angeles Cactus and Succulent Society was going to have its 2018 Drought Tolerant Plant Festival the following day at a place called Sepulveda Garden Center in Encino. I'm not very familiar with the San Fernando Valley, and I had no idea where Encino was relative to our location. Imagine my surprise when Google Maps told me that the Sepulvedea Garden Center was less than two miles from our motel! What's better than the gift of serendipity?
I arrived early—the vendors were still setting up—so I took the time to walk around the grounds. It turned out the Sepulveda Garden Center is not just the community building where the succulent show was being held, it also includes 800 (!) 10×20 ft. community garden plots, picnic areas, dirt roads, and a succulent garden! All of it is part of a 2,000 acre recreation area in the heart of the San Fernando Valley. Another nice surprise!

The first thing I noticed as I was approaching the parking lot was this: 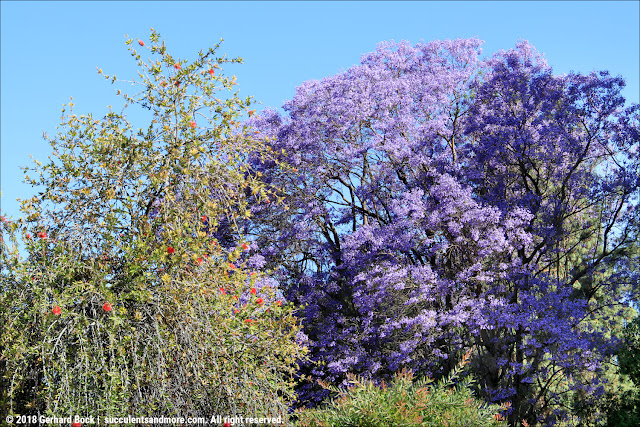 Pretty hard to miss, isn't it? 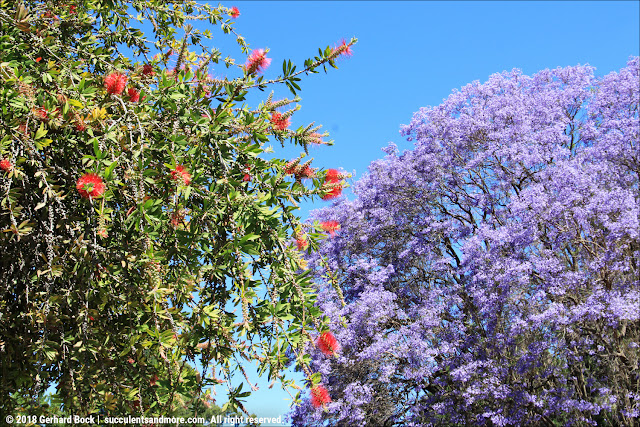 I talked to several locals, and they said they'd never seen this jacaranda (Jacaranda mimosifolia) bloom so profusely. And since it doesn't seem to get trimmed regularly, if ever, it's also a massive specimen. The contrast between the purple flowers of the jacaranda and the bright red flowers of the bottlebrush (Callistemon citrinus) was perfection. Sheer serendipity that these two were planted close enough for me to take these pictures—I doubt there was any planning involved. 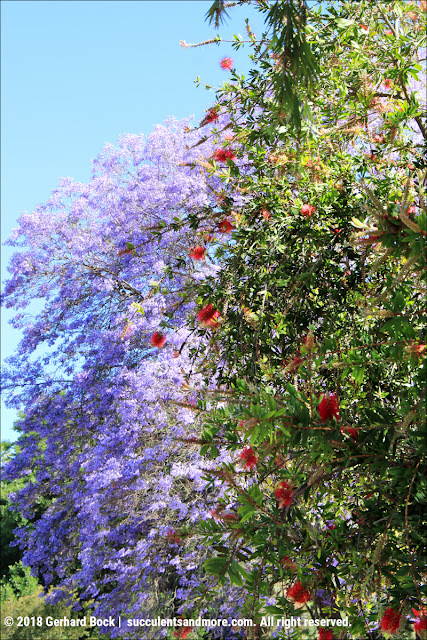 A few snaps of the community garden plots with the mighty jacaranda as the backdrop: 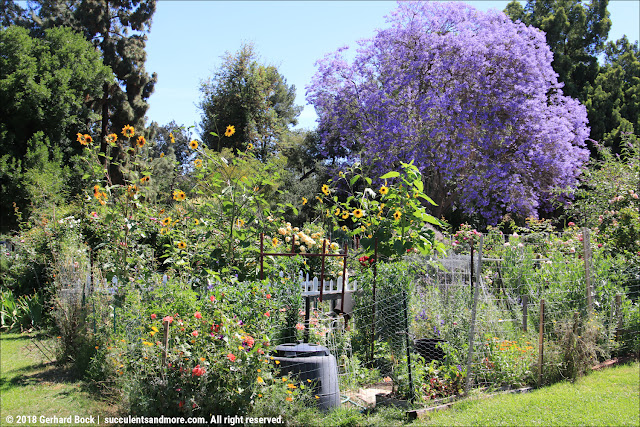 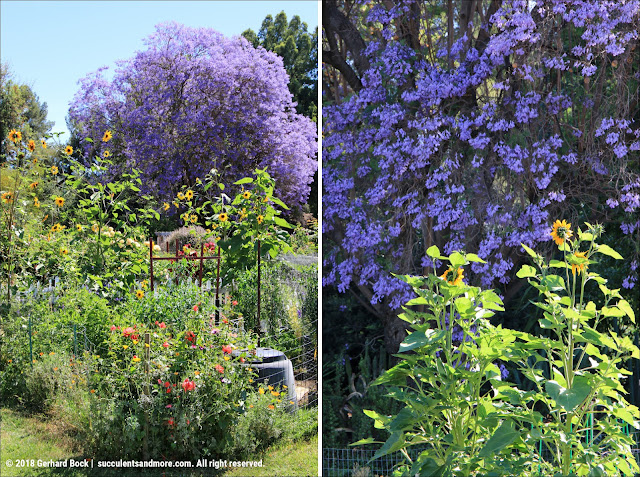 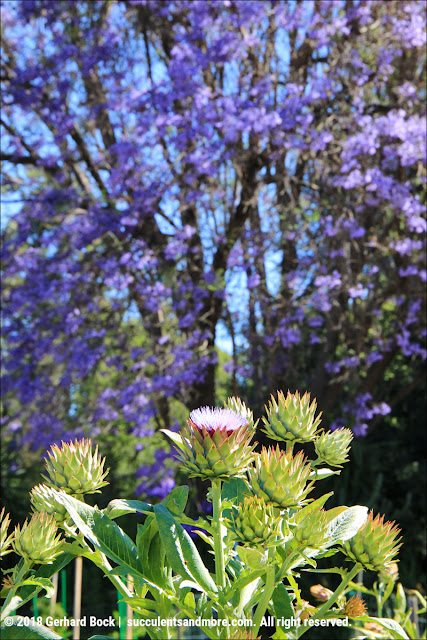 The small succulent garden is tucked away behind the community center. I don't know how it started, or who started it, but apparently the Los Angeles Cactus and Succulent Society has taken on the task of maintaining and upgrading it. 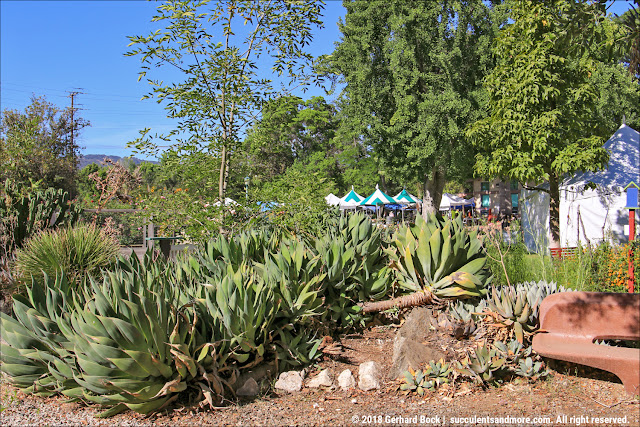 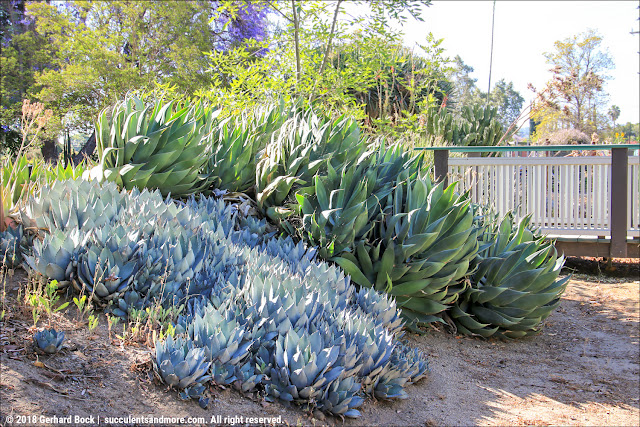 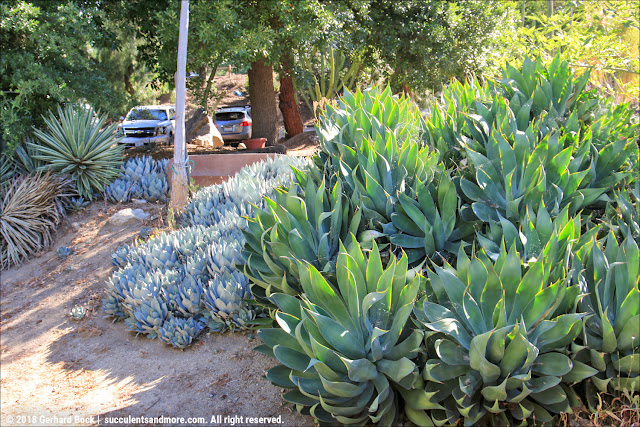 Agave parryi in the front, Agave angustifolia 'Marginata' in the back: 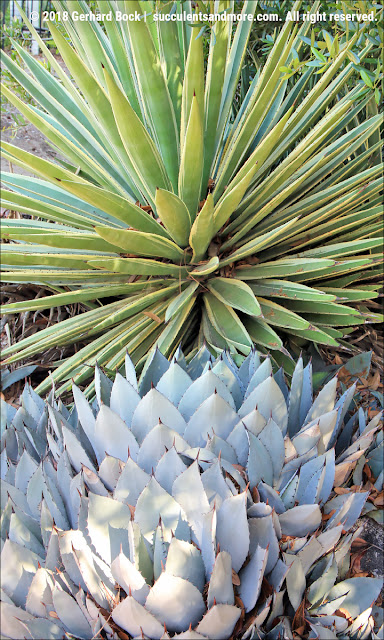 This Agave angustifolia 'Marginata' flowered and died quite a while ago. The bulbils on the flower stalk were still hanging on; with some TLC and water they could have been rescued. 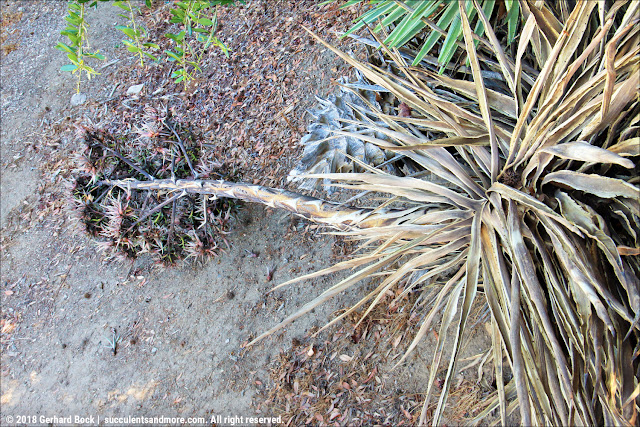 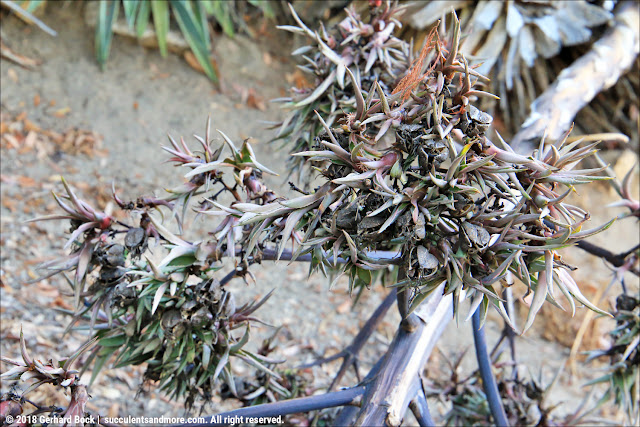 These Agave angustifolia 'Marginata' bulbils were in better shape:

Agave parryi pups often pop up far away from the mother plant: 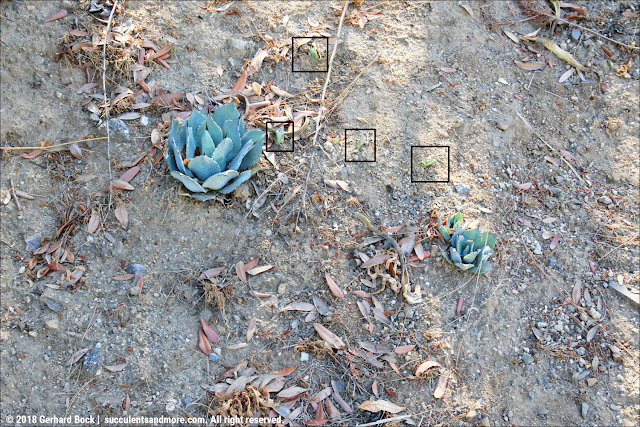 A tall and skinny Aloidendron dichotomum keeps watch over the agaves: 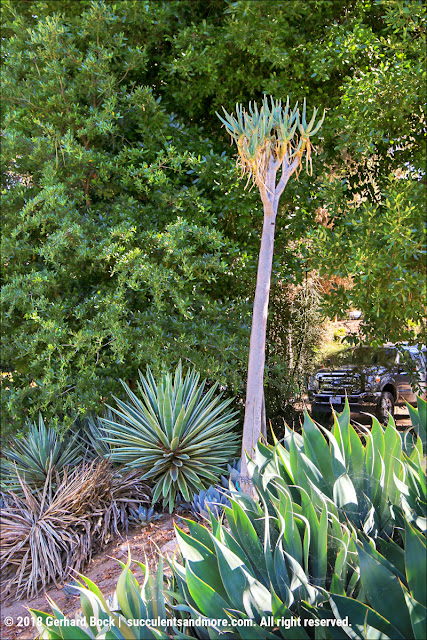 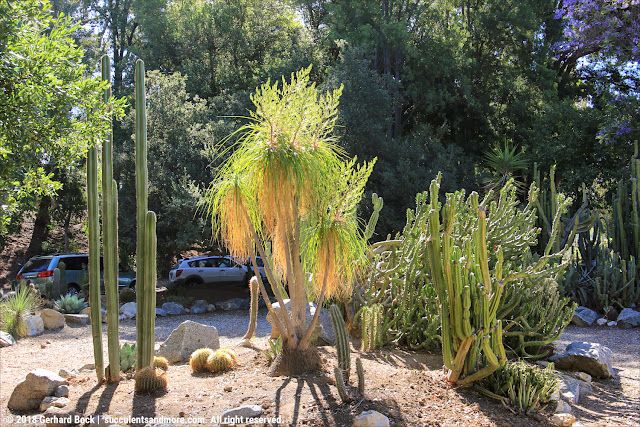 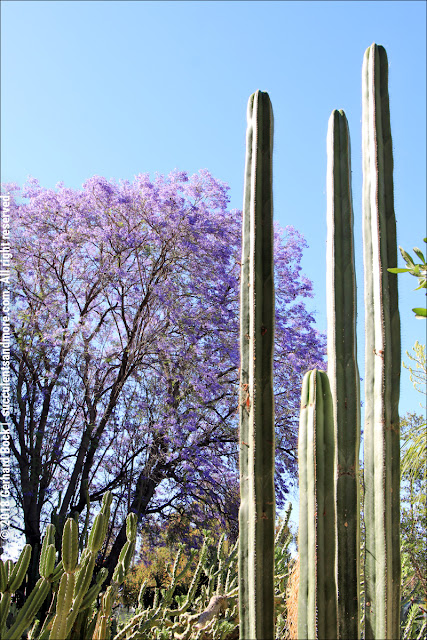 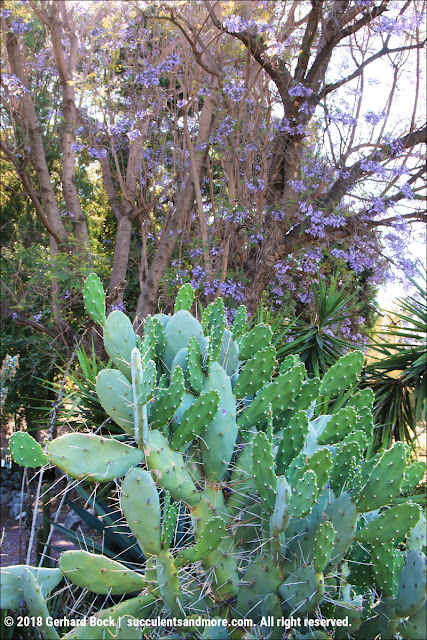 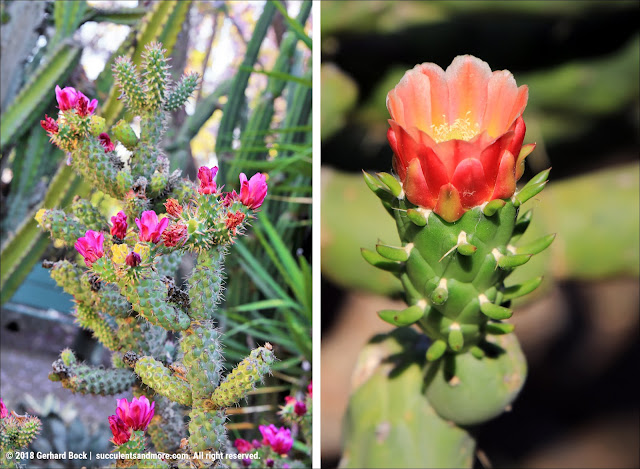 Look how perfectly this little guy fits between two thorns: 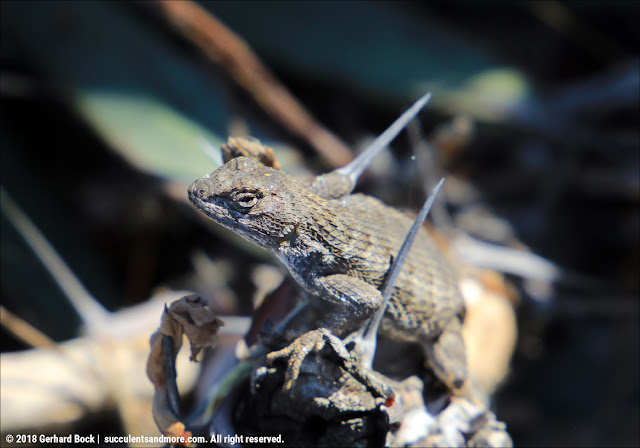 The plantings are a bit of a hodgepodge, but it's just what I like, considering that's the “style” my own garden seems to have adopted: 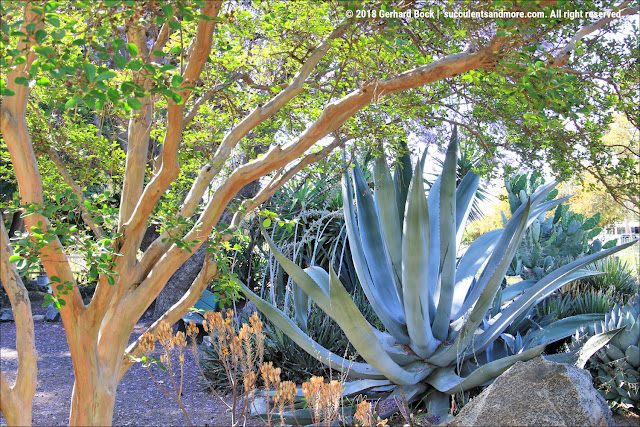 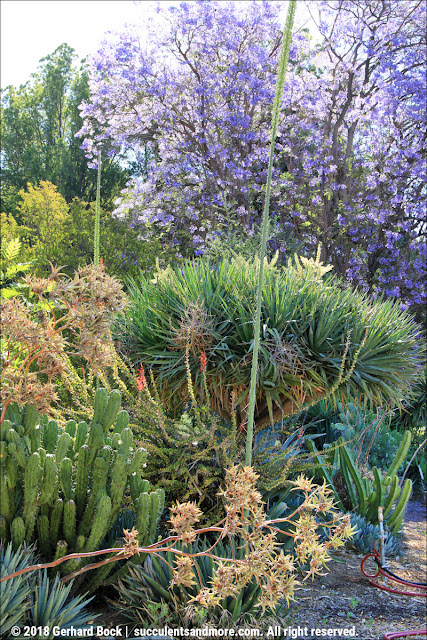 After spending more time than anticipated in the small succulent garden, it was time to hightail it over to the Los Angeles Cactus and Succulent Society Drought Tolerant Plant Festival. Unfortunately, I didn't take many photos because as soon as I saw all the goodies for sale, I switched from photographer to plant nerd. Here are just a few quick snaps:


Here's what I bought (I had to squeeze those old memory cells hard to get anything useful out of them):
I was happy with these finds. But what made me even happier was having come across this unexpected island of beauty in the middle of the urban sprawl in the first place. When you visit a destination, like a botanical garden, you have certain expectations it needs to live up to. In the case of the Sepulveda Garden Center, I had no expectations at all because I didn't even know it even existed. That's why it makes the most treasured kind of discovery.

© Gerhard Bock, 2018. No part of the materials available through www.succulentsandmore.com may be copied, photocopied, reproduced, translated or reduced to any electronic medium or machine-readable form, in whole or in part, without prior written consent of Gerhard Bock. Any other reproduction in any form without the permission of Gerhard Bock is prohibited. All materials contained on this site are protected by  United States and international copyright law and may not be reproduced, distributed, transmitted, displayed, published or broadcast without the prior written permission of Gerhard Bock. If you are reading this post on a website other than www.succulentsandmore.com, please be advised that that site is using my content without my permission. Any unauthorized use will be reported.
agaves plant show public landscaping public park Southern California
Location: 16633 W Magnolia Blvd, Encino, CA 91436, USA