- November 29, 2018
My good intentions of posting a daily update from my Southern California road trip didn't quite translate into reality. Sometimes a full day of taking in new sights, talking to fellow plant nerds, as well as driving—the one constant—can be more tiring than I initially realize.

So, a day late, here are some photos and observations from Tuesday, day 2.

Day 2 started with a visit to the Theodore Payne Foundation in Sun Valley, northeast of Burbank. Los Angeles nurseryman Theodore Payne (1872-1963) is considered to be the father of the native plant movement in California. The Foundation owns 22 acres of canyon land, featuring walking trails (the wildflower trail is said to be spectacular in the spring), a couple of demonstration gardens, and arguable one of the best California native plant nurseries in the state. At the end of a long, dry summer the native vegetation wasn't at its prettiest (that's just how it is), but the nursery lived up to my expectations. I'd made a shopping list ahead of time and found everything I was looking for, mostly garden-tolerant manzanitas and a couple of white-flowering, cold-hardy ceanothus for my mother-in-law's garden.


Stop #2 was Rancho Santa Ana Botanical Garden in Claremont (Theodore Payne helped establish it in 1926 in a different location and he was still active when it moved to its present site in 1951). Attached to the campus of Claremont Graduate University, it houses CGU's botany department.

I met up with Andy Siekkinen, one of the world's leading experts on hechtias and a walking and talking reference library on terrestrial bromeliads. Andy is doing groundbreaking research on hechtias that I'm sure will bring new order into a poorly studied and taxonomically confused genus. He's also a passionate grower of hechtias and other terrestrial bromeliads, and he generously took time out of his busy day to show me his plants in the greenhouses. I was amazed by the sheer quantity, but he said it's only a small part of his collection; most of it is at his house in San Diego.

Andy has the rare gift of being able to explain complex scientific matters in terms that non-scientists like me can understand, and he does so with an enthusiasm that is electric and infectious. In addition, he's just a nice guy who doesn't make you feel like an idiot if you miss something. My visit with him was the highlight of my trip so far.

Here are a few pictures of Andy's plants. I'll get IDs from him for a detailed post later on.


After I said goodbye to Andy, I realized 2½ hours had gone by. That meant there wasn't much time to explore the actual botanical garden. I need to come back in the spring when it's at its most vibrant. The nursery was closed as well so I didn't have that distraction to keep me even longer.

After a sluggish drive from Claremont to northern San Diego County, I was rewarded with a spectacular post-sunset sky over the Pacific Ocean: 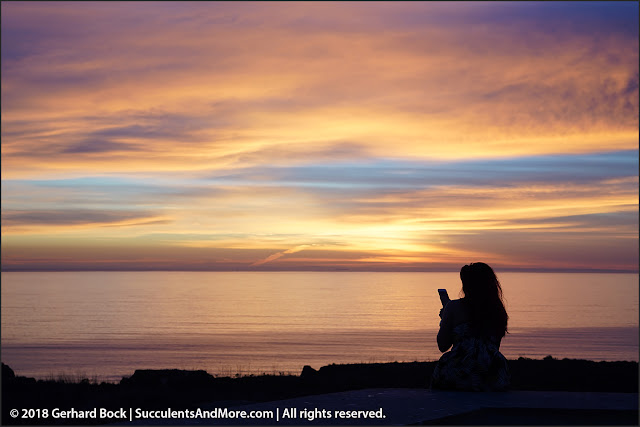 Life is good when you get to see a sight like that!

© Gerhard Bock, 2018. No part of the materials available through www.succulentsandmore.com may be copied, photocopied, reproduced, translated or reduced to any electronic medium or machine-readable form, in whole or in part, without prior written consent of Gerhard Bock. Any other reproduction in any form without the permission of Gerhard Bock is prohibited. All materials contained on this site are protected by  United States and international copyright law and may not be reproduced, distributed, transmitted, displayed, published or broadcast without the prior written permission of Gerhard Bock. If you are reading this post on a website other than www.succulentsandmore.com, please be advised that that site is using my content without my permission. Any unauthorized use will be reported.
Andy Siekkinen botanical garden hechtia nurseries Southern California succulents travel