Giving dudleyas another try—and tulips, too

- December 19, 2017
Dudleyas are succulents with fleshy leaves hailing from southwestern North America. Many of the 45 species are native to coastal California where they happily cling to cliff faces or rock outcroppings, often in a manner that appears to defy gravity. In their natural habitat, they are perfectly adapted to going without water for months at a time. In the summer, they often go dormant, shriveling up to just a fraction of their normal size.

As is often the case with California natives, dudleyas can be challenging in cultivation when conditions are significantly different from what they're used to. Rot is the biggest problem. A common cause is watering in the summer when dudleyas expect to be completely dry. In addition, since many dudleyas grow vertically, they have a hard time dealing with water left sitting in their crown or on their leaves. That's why dudleya experts typically recommend planting them at an angle and never watering them from overhead.

Having killed more dudleyas than I care to remember, I stopped trying for a number of years. However, at my early December outing to Annie's Annuals in Richmond I was so smitten by their collection of dudleyas that I decided to throw caution to the wind. After initially putting five or six dudleyas in my cart, I managed to rein myself in a bit and ended up with three: Dudleya farinosa, Dudleya hassei, and Dudleya palmeri. My decision was based in part on the unexpected success I've had this year keeping alive a Dudleya brittonii I bought in March at Poot's Cactus Nursery. Either my luck has turned, or I simply know more about the idiosyncrasies of dudleyas than before.

The next question, logically, was where to put my dudleyas. Since they would fry to a crisp in the summer if planted in full sun, I needed a more sheltered place. I eventually decided on the spot marked with a yellow arrow in the photo below: 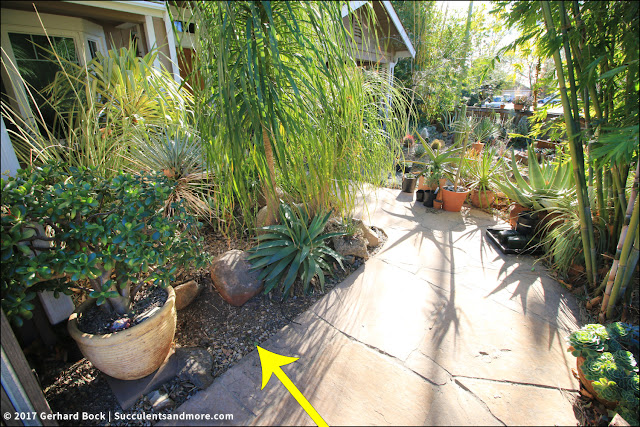 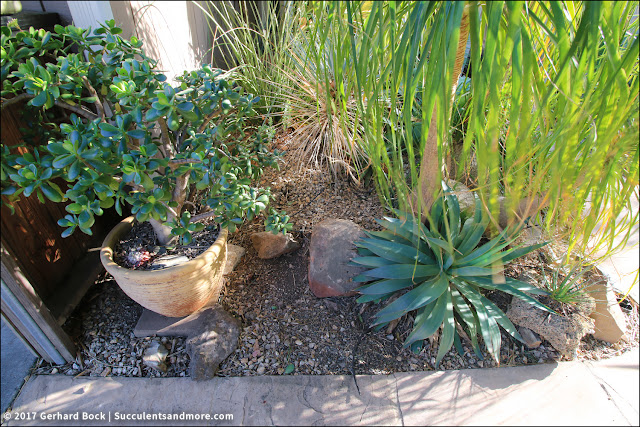 Mindful of the need for good drainage, I decided to build a small mound surrounded by rocks. Instead of making my own soil mix like I often do, I took the easy way out and bought a few bags of Kellogg's Organic Palm, Cactus & Citrus Mix. It's made of recycled forest products, pumice, sand, bark fines, dehydrated poultry manure, and hydrolyzed feather meal and has worked very well for me over the years.

The finished mound looked a little like a camp fire pit. At first I was bothered by that, but now, a few days later, I've gotten used to it. 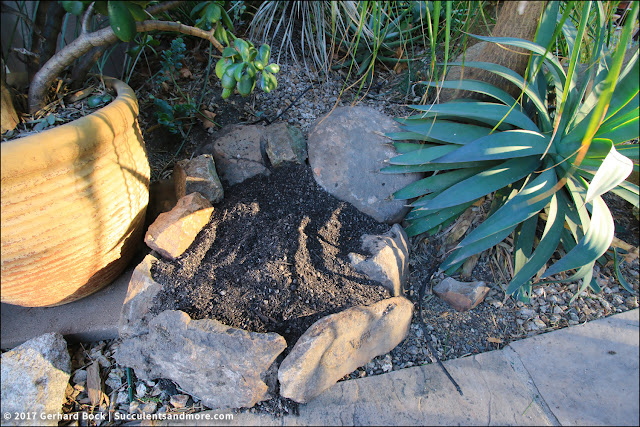 Here is the finished product: 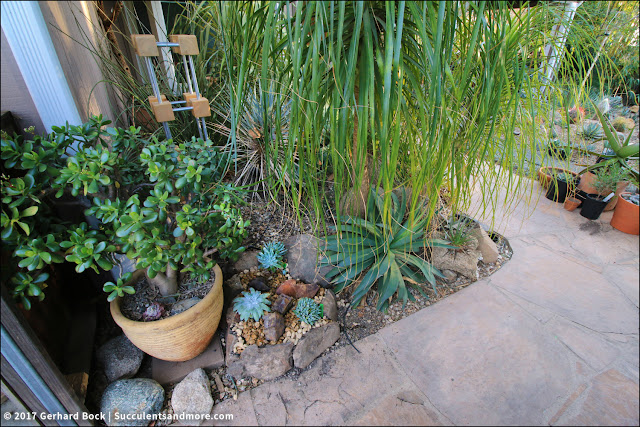 I'm actually quite satisfied with the result. 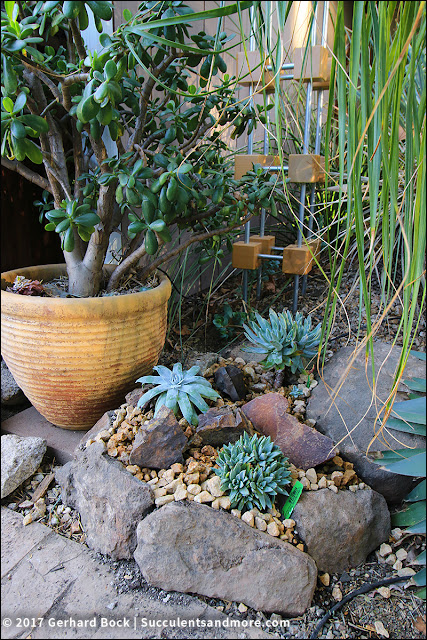 The dudleya on the lower left is Dudleya brittonii (purchased in March at Poot's Cactus Nursery), at the 12 o'clock position is Dudleya palmeri, and in the lower right is Dudleya farinosa. (The third dudleya from Annie's, Dudleya hassei, went in one of the succulent mounds that replaced the front lawn.) 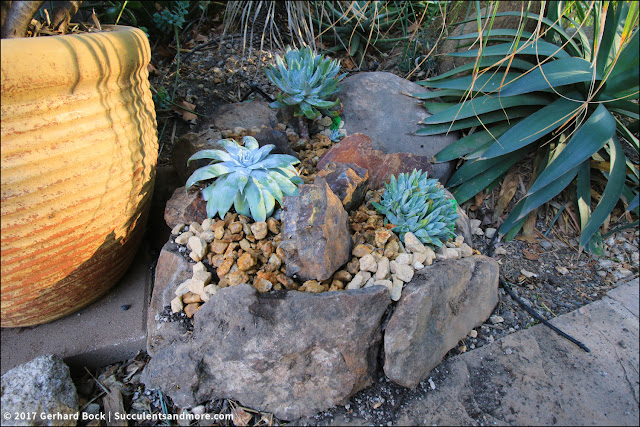 When I was at Lowe's to buy the Kellogg's soil mix, I had another moment of weakness. Actually, two. The first one resulted in my purchase of the Acacia cognata 'Cousin Itt' you saw in the photo above. The second was this impulse buy: 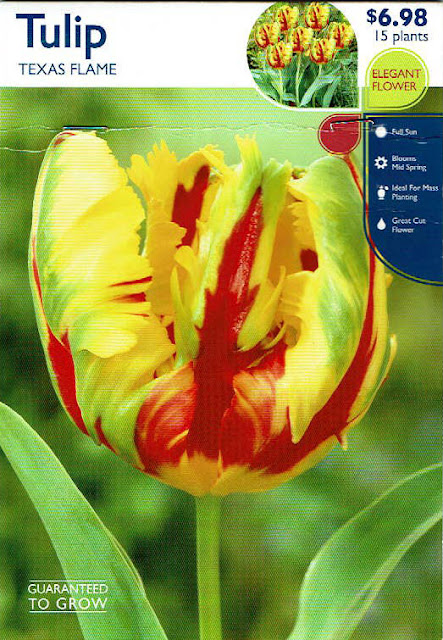 Most tulips don't do well here because our winters are so mild. I usually plant them in a bowl and then toss them after they're done blooming. Sure, I could store the bulbs but I can't be bothered. We haven't had tulips in many years, but these 'Texas Flame' tulips begged so hard to come home with me that I gave in.

Here are the 15 bulbs. Take my word for it, they're in there. Now it's just a matter of waiting patiently. Hopefully something will come up! 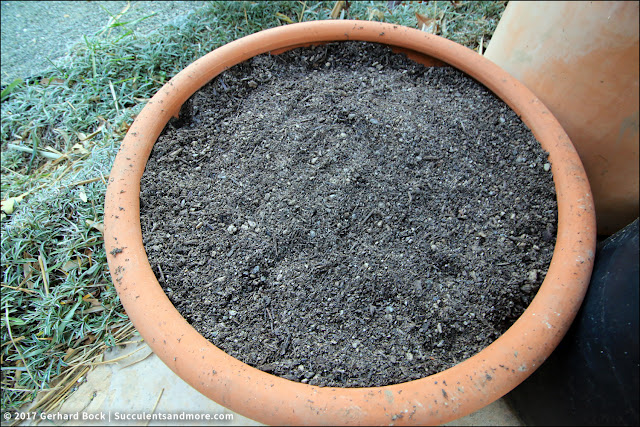