My most anticipated book of the year: Debra Lee Baldwin's Designing with Succulents, Second Edition

- August 15, 2017
Ten years ago, Timber Press published a book that ended up having a major influence on my own garden style and plant obsessions: Designing with Succulents by Debra Lee Baldwin. At the time, few homeowners outside of desert climates knew much about succulents, let alone used them for residential landscaping (myself included), and only hard-core aficionados collected them.

All that was about to change. Whether Designing with Succulents triggered this transformation or whether it was simply published at the right time, I cannot say. But it became the manifesto of a movement that, facilitated by the rise of social media like Facebook and later Pinterest and Instagram, would propel succulents into the mainstream—and Debra Lee Baldwin onto the national stage. The January 2010 publication of Debra’s next book, Succulent Container Gardens, cemented her reputation as the “Queen of Succulents,” and today she is a much sought-after speaker and a succulent maven with a massive worldwide following. I bet than in 2007 neither Debra nor Timber Press had any idea what a best-seller Designing with Succulents would become (over 180,000 copies in print) and what a lasting impact it would have. Sometimes the second edition of a popular book is little more than a cosmetic update, maybe featuring a new foreword, a different page design, and some new photos. Not so here. The second edition of Designing with Succulents may share the same basic organization as the first edition—the first half covering design principles, the second half showcasing the best plants for a variety of applications—but the nuts and bolts of the book have been completely reworked. In the preface, Debra says:


The world of succulent design has advanced so significantly since the first edition of Designing with Succulents was released in 2007 that this second edition is a complete rewrite—in effect a new book. It showcases the cleverness and creativity of numerous designers and gardening enthusiasts, many of whom used the first edition as a starting point. 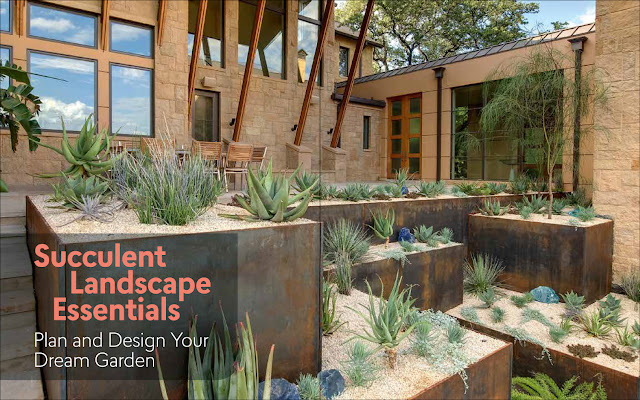 Let’s talk a closer look at the book. Beyond the preface and introduction, it consists of six major sections. “Succulent Landscape Essentials: Plan and Design Your Dream Garden” covers basics such as site selection and soil preparation; design principles such as scale and proportion, repetition, contrast, emphasis, shape and texture, and color; hardscape elements such as walls, raised beds, pathways, and terraces; as well as outdoor art. 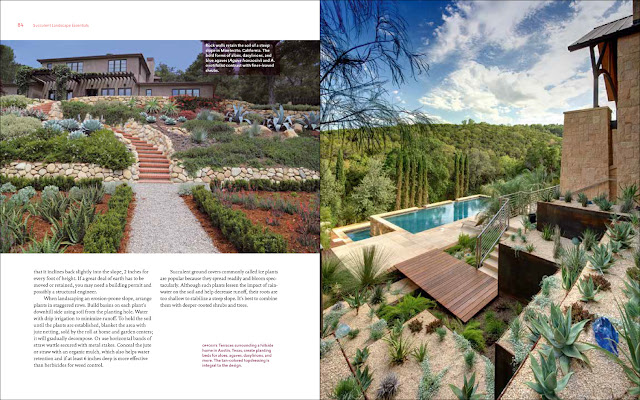 “Success Secrets for Succulents” covers the basics of planting, watering and fertilizing, pest, damage and weed control as well as growing succulents in challenging climates—everything from hot and dry, rainy and humid, to cold climates. This chapters also touches on various propagation techniques. 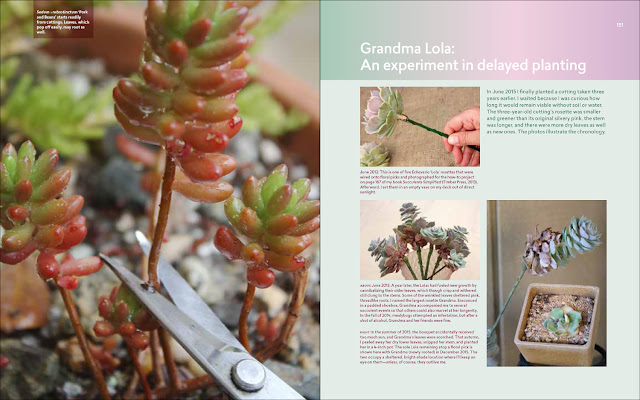 “Succulents A to Z” contains Debra’s “favorite foolhardy succulents for gardens large and small.” Organized in alphabetical order, this section describes the best species and cultivars from all common succulent genera—from aeoniums to yuccas. 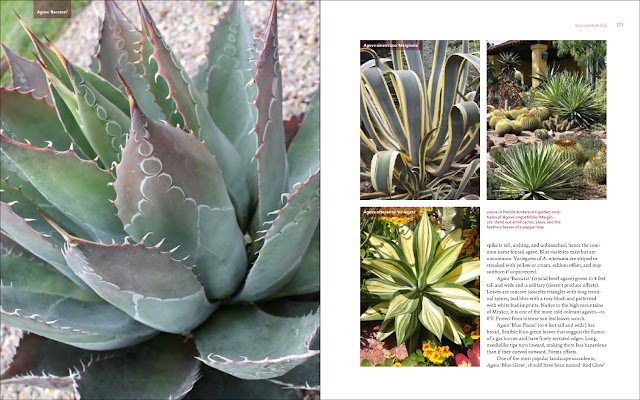 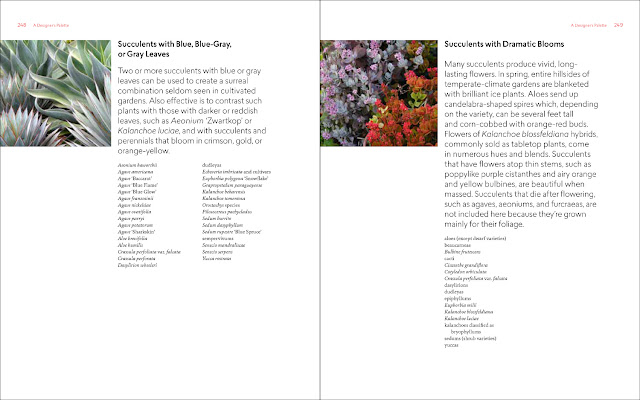 “Top Fifty Waterwise Companion Plants for Succulents” showcases a selection of trees, shrubs, perennials, and grasses that not only look good in combination with succulents but also share similar cultivation requirements. 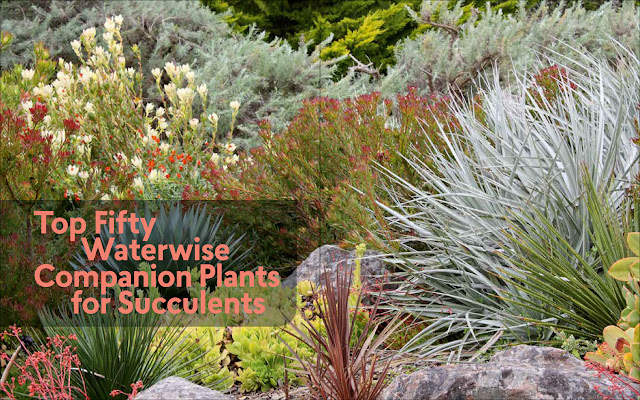 My favorite addition to the second edition are the Featured Gardens. At the beginning of each section, Debra introduces us to a very special succulent-centric garden. For example, she describes the evolution of her own ½ acre garden over the last ten years—in her words, “a giant editing job”—and takes us to other gardens in San Diego, on the Central Coast, and in Northern California. All these examples illustrate how harmoniously succulents blend into just about any garden style. 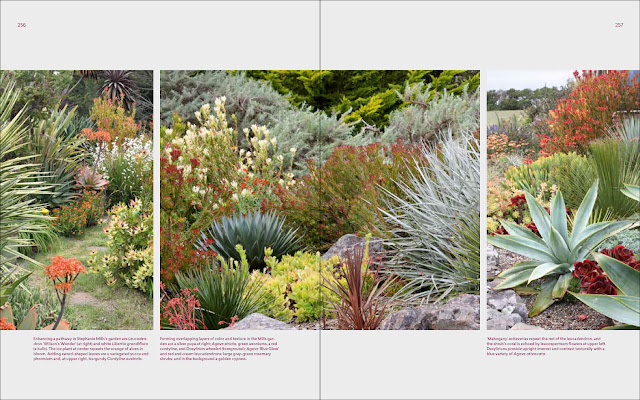 What I noticed immediately when I received my copy of the book was its visual elegance. The superb page design, combined with arguably the best succulent photographs ever to to appear in a mainstream title, make the second edition of Designing with Succulents the most handsome commercially published gardening book I’ve ever seen. 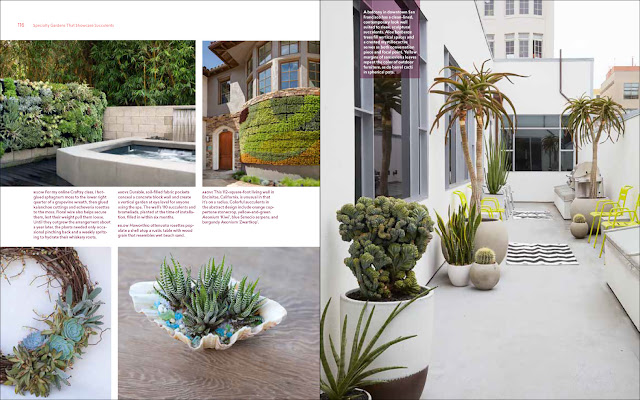 As a photographer, Debra does know that one well-chosen photo often stirs a reader’s imagination more than a page of even the most evocative prose. Still, without words to back up the images, visual beauty is just skin-deep. So while it’s possible to enjoy the second edition of Designing with Succulents as a lavish photo book, its real value is the wealth of information contained in its pages. Debra’s writing is clear as a bell and conveys even complex information without going over their heads. It simply is a joy to read.

Much has changed since the publication of the first edition of Designing with Succulents. As I alluded to earlier, succulents are everywhere now—in public and private gardens, in books, in magazines, in ads, and on TV (does anybody else look for succulents in TV shows like I do?). The explosive popularity of succulents has led to a whole new level of sophistication. Professional designers and home gardeners alike are finding ever new ways of combining succulents, either with other succulents or unrelated plants. Breeders continue to come up with new hybrids or improve on popular cultivars. And ceramic artists are more creative than ever when it comes to making containers that let succulents shine.

With her acute powers of observation, informed by connections to industry professionals and succulent enthusiasts all over the world, Debra captures the zeitgeist of contemporary succulent design like no other writer. As a result, she continues to keep her readers’ passion for succulents burning bright.

Final verdict: the second edition of Designing with Succulents is an instant classic. It’s a must-have for any succulent lover, even if you already own the first edition.

Click here to read my interview with Debra Lee Baldwin.


Note: Timber Press provided me with a complimentary review copy of this book. All book reproductions above are copyright-protected and are used by permission of Timber Press.
book review books landscape design succulent basics succulents