- August 20, 2017
Scottsdale, AZ is Phoenix's wealthy neighbor to the east. The city is known for its upscale resorts and golf courses; the New York Times called it "a desert version of Miami's South Beach." As a result, the City of Scottsdale has more resources at its disposal than other cities of comparable size.

Case in point: the Scottsdale Xeriscape Demonstration Garden. This may be the most surprising public garden I've ever visited. I say surprising because instead of cookie-cutter hardscaping and the run-of-the-mill greenery you typically find in a public park, the City of Scottsdale created an outdoor lab showcasing water-saving landscaping techniques for Arizona homeowners as well as plants that are adapted to the harsh desert climate (the garden has over 7,000 plants from 200 species).

The 5.5 acre Scottsdale Xeriscape Demonstration Garden is part of Chaparral Park and seamlessly incorporates the adjacent Chaparral Water Treatment Plant in its layout. In fact, the garden partially sits on top of a buried 5.5 million reservoir of treated water.

The project was designed by Ten Eyck Landscape Architects and completed in 2007. Christine Ten Eyck includes gabion walls in many of her designs, but I have never seen such a variety of gabions in one place. This is gabion city!


A series of steel panels with intricate geometric patterns soften the otherwise bland facade of the water treatment plant. 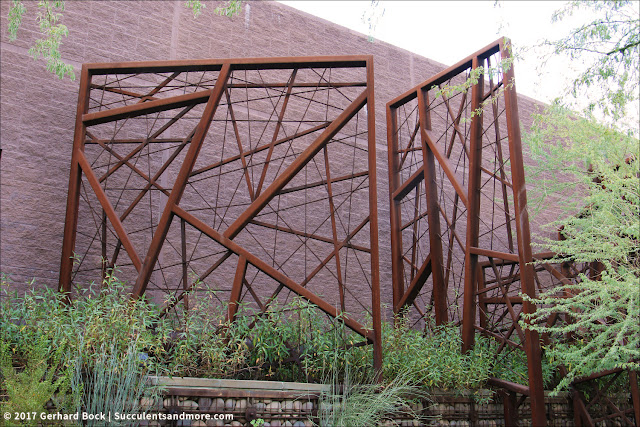 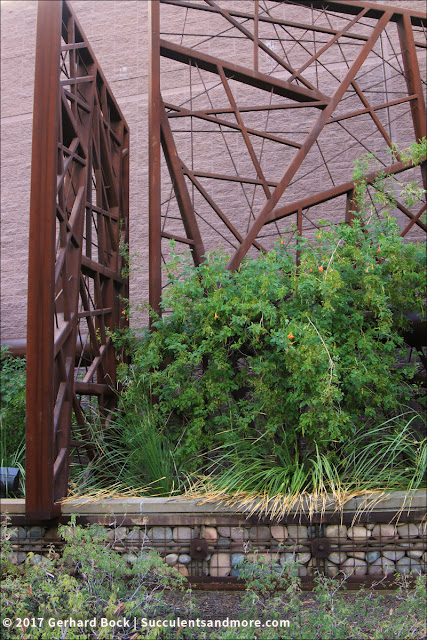 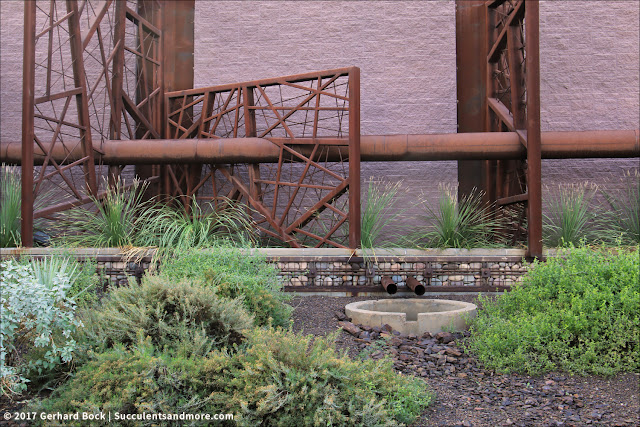 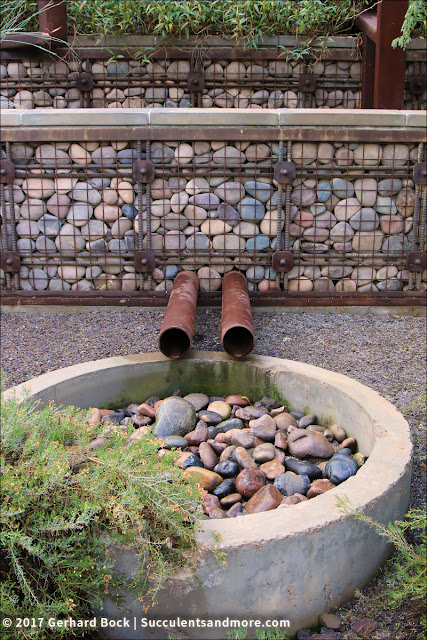 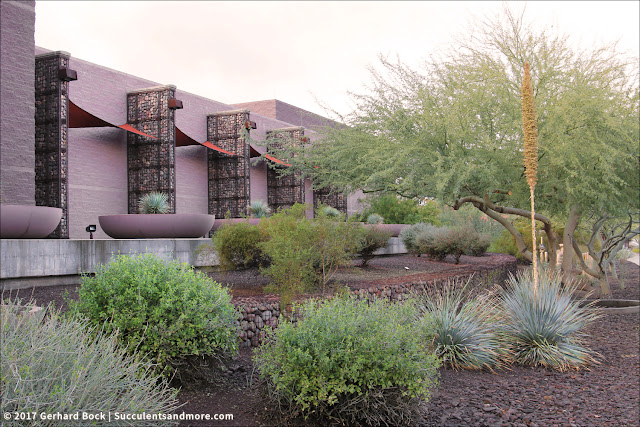 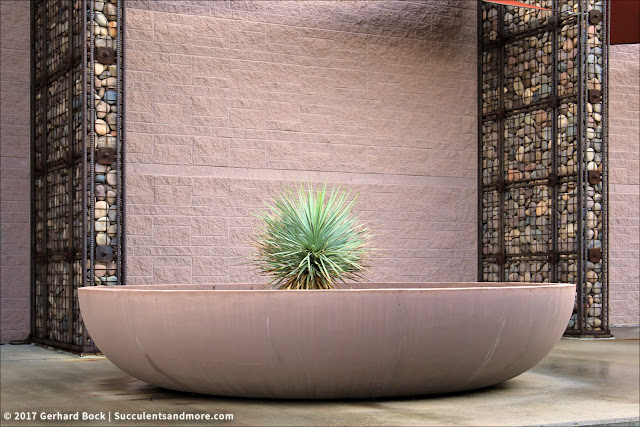 Now we're at the "official" entrance to the Scottsdale Xeriscape Demonstration Garden. The building you see in the background is the water treatment plant I'd just walked around.


Terraced gabion walls slow down rainwater, which can be very fast-flowing during the summer monsoons, so it can sink into the ground instead of running off. 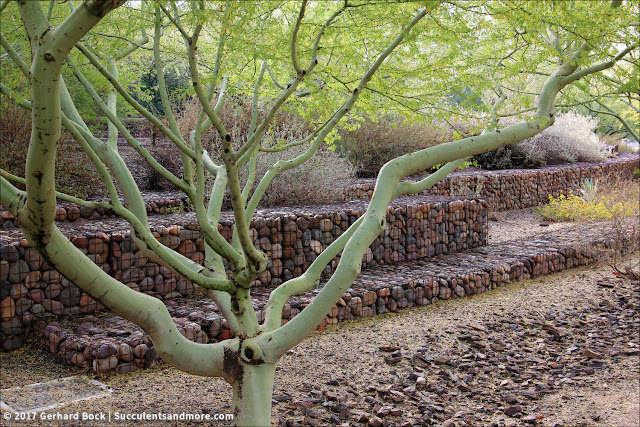 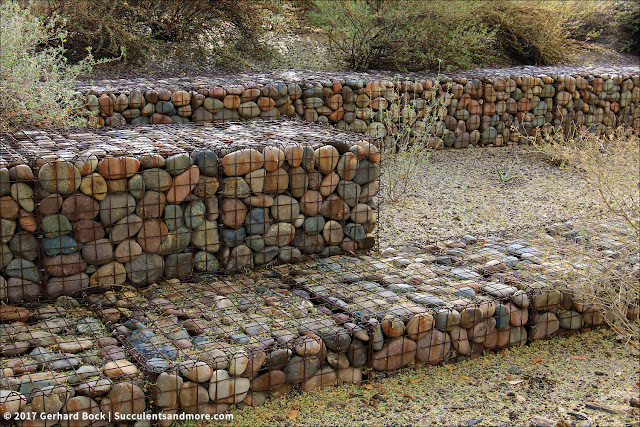 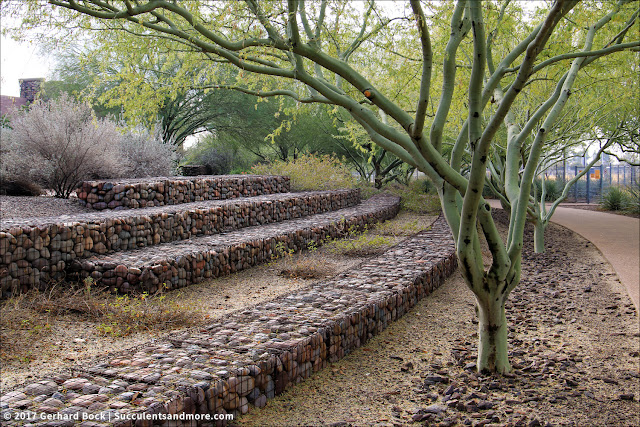 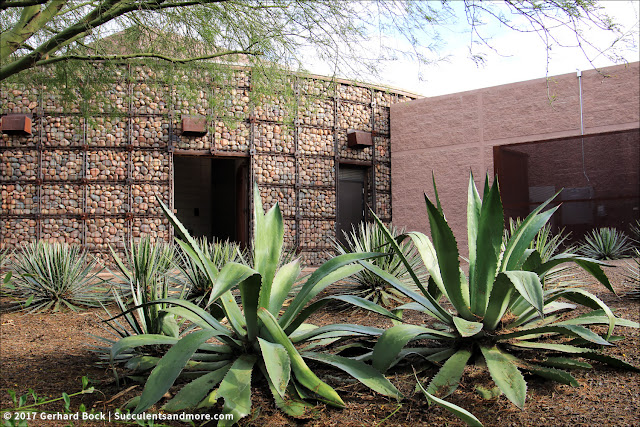 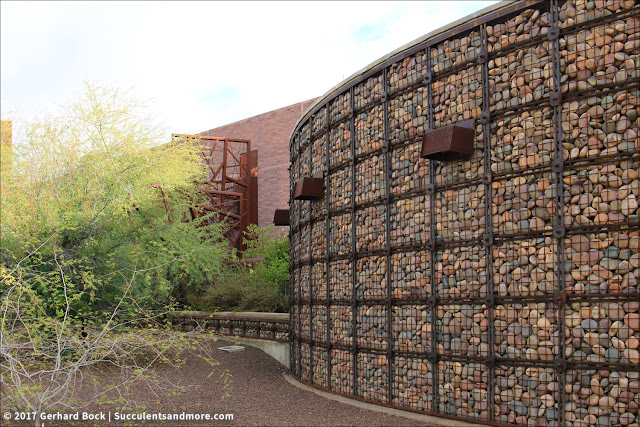 At the far end of the Demonstration Garden is what turned out to be my favorite feature: Terraced Cascade, an environmental artwork by Seattle-based artist Lorna Jordan. According to Lorna's web site, this garden is an abstraction of the human body: "a series of rib-like terraces and a vertebrae-like cascade." The layered design guides rainwater into a mesquite bosque (on the right in the photo below) which provides much needed shade in the summer. Plants were selected "for their curious shapes, colors, and textures." 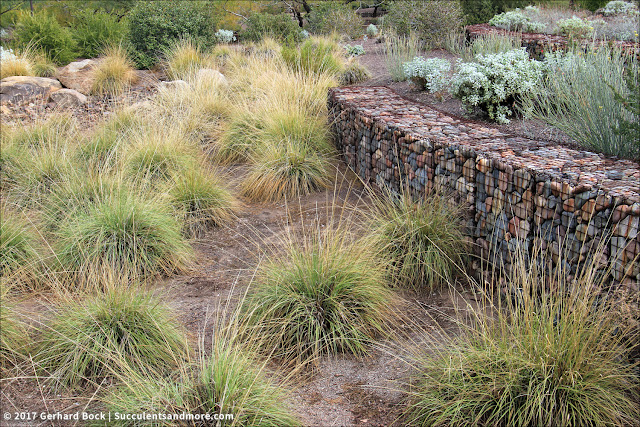 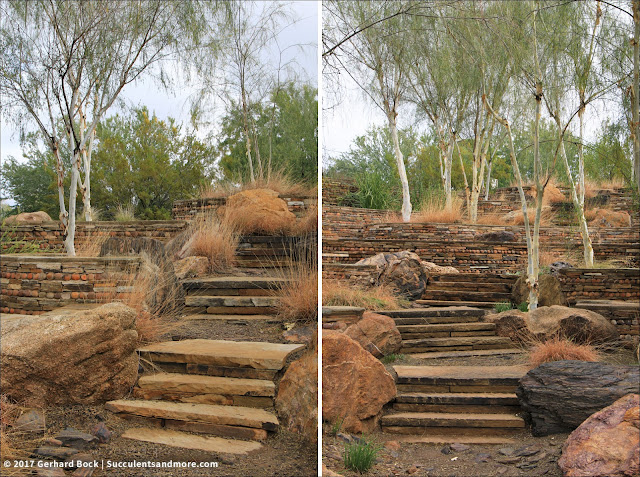 Ordinary homeowners don't have the space or the budget to build a hardscape this grand. But smaller-scale variations are within reach: say, a low dry-stacked wall for a raised bed or a seating area, or maybe even a gabion feature (yes, you can do it yourself).

But you don't need fancy hardscaping to achieve the goals promoted by the Scottsdale Xeriscape Demonstration Garden: growing climate-appropriate plants, reducing outdoor water use, and keeping rainwater where it falls. If you live an area that's prone to heavy downpours, you can prevent rainwater runoff simply by creating mounds and depressions (swales) that channel the water to the plants. This works even in a small residential garden.

I was at the Scottsdale Xeriscape Demonstration Garden on December 31, 2016. From posts by fellow bloggers Pam Penick (Digging) and Noelle Johnson (Ramblings from a Desert Garden), it looks like April would be a great time to visit, with the mesquite trees freshly leaved out and many wildflowers and desert plants in bloom.

The Scottsdale Xeriscape Demonstration Garden is in Chaparral Park at the SE corner of Hayden Road and McDonald Road. Parking is off Hayden just south of McDonald near the dog park. Here's a handy map I found on the City of Scottsdale web site: 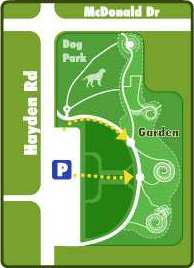