- February 06, 2017
On our Sunday walk through the UC Davis Arboretum, we left the established path for a few hundred feet to take a shortcut through the redwood grove. There I spotted a curious sight through a chain-link fence: 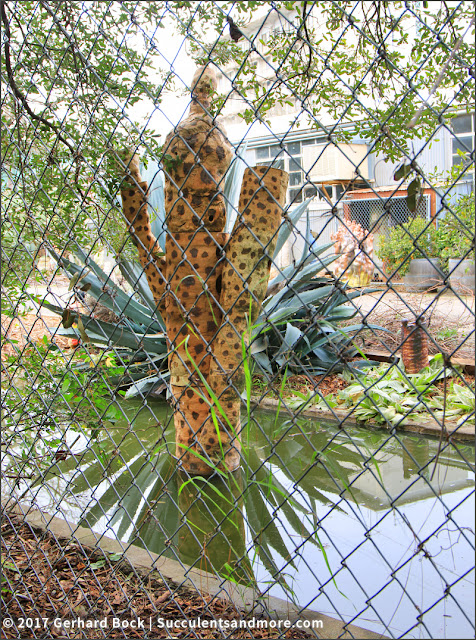 A massive Agave americana, 6 ft. tall and at least 8 ft. wide, hiding behind a mysterious ceramic sculpture and reflecting in a basin filled with murky water.

Clearly is this not a public display garden. The ceramics are as rough around the edges as the potted agaves in front of the fence: 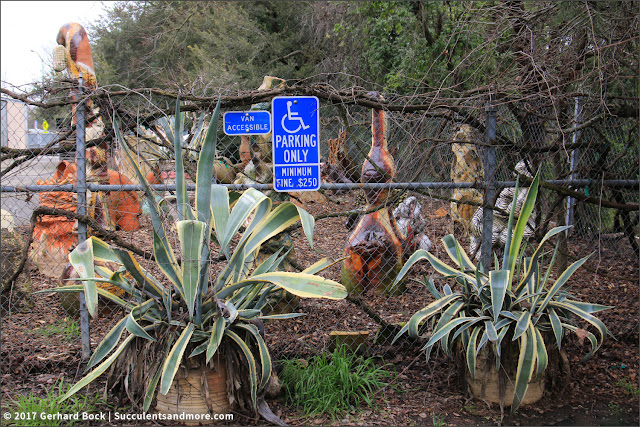 This Agave americana outgrew its pot and cast it off altogether. Who knew that containers were optional? 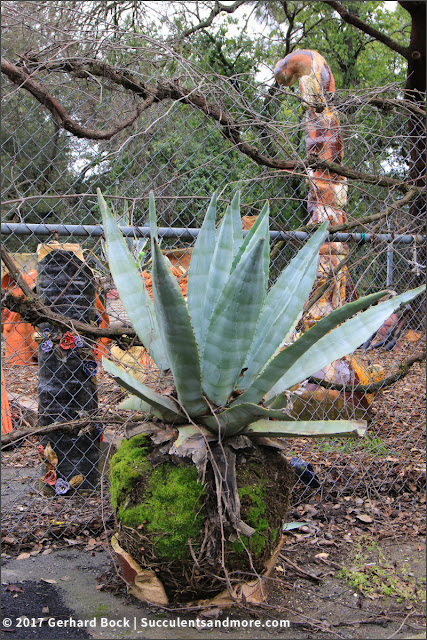 Sticking my camera through the locked gate, I photographed the large Agave americana you saw at the top of this post. 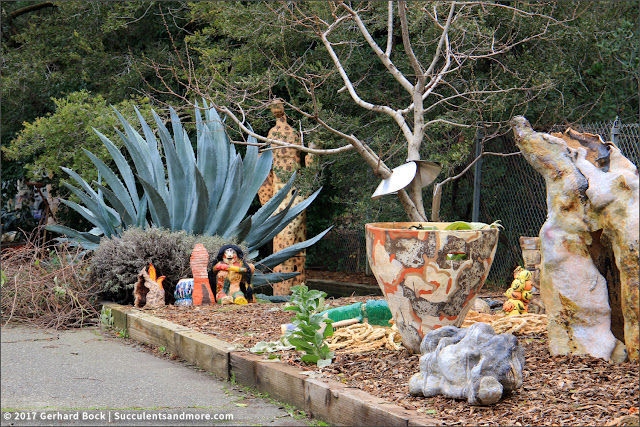 But what are all these ceramics? They have a cast-off look about them. Is this a ceramics graveyard?

I wish I could have walked in there and taken a closer look. Quite a few of the ceramics are truly intriguing, like this upside-down head: 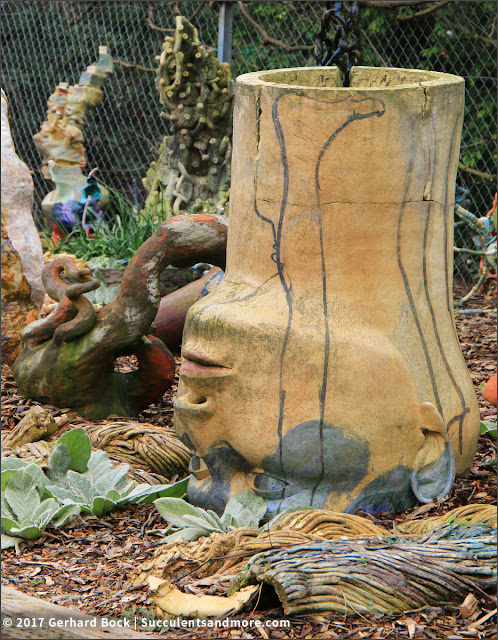 And this enigmatic statue: 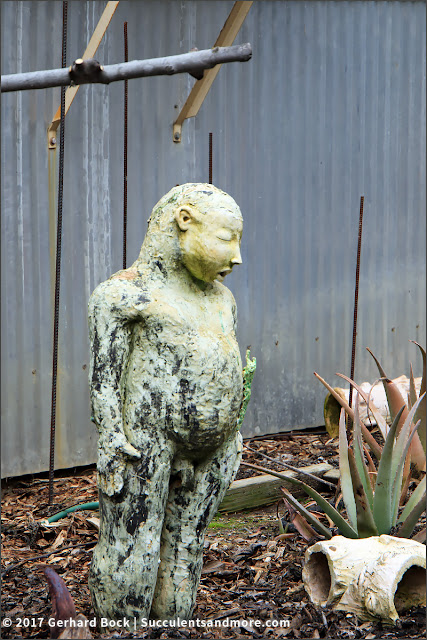 But the ceramics weren't the only things of interest to me. Take a look at this prickly pear (Opuntia ficus-indica) growing through the chain-link fence: 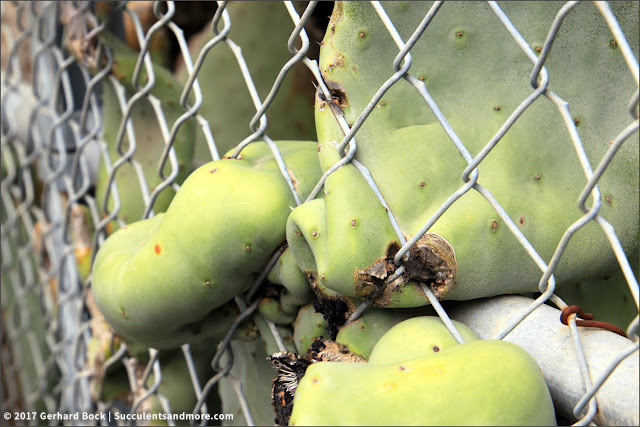 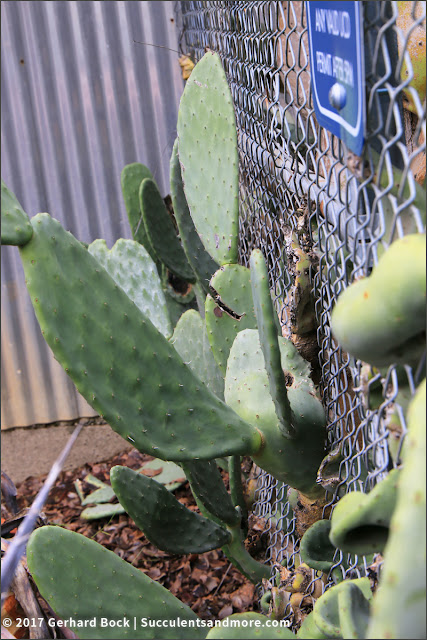 Nothing can stop a prickly pear! 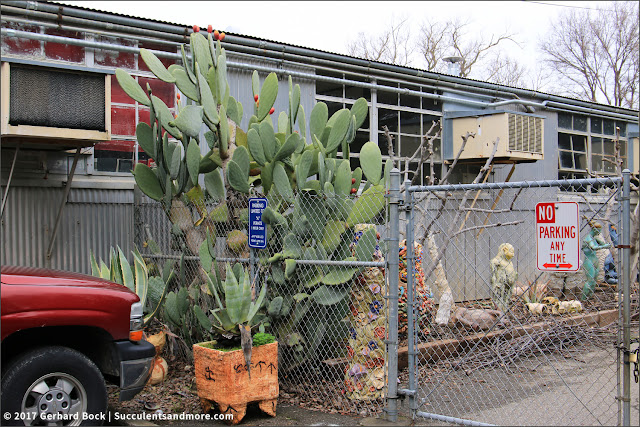 It turns out this "graveyard" is behind Temporary Building 9 (TB 9), home of the UC Davis Ceramics Program. This blog post has some interesting info that I bet many locals don't know (I didn't):


The 7,200 sq. ft. building was bought from the federal government as war surplus in 1947 and used as a dormitory building, fondly referred to as The Warehouse. In 1951 the building was converted to a combination police station, mailroom, and storage area. The art department began taking it over in 1961; Robert Arneson arrived in 1962. By the end of the 1960s the entire building had been given over to the ceramics program and a metal foundry.

Robert Arneson was a ceramics professor at UC Davis for more than 30 years (he passed away in 1992). His works are in many public and private collections. He is most famous for his Egghead series. The last seven of them were installed on the UC Davis campus after Arneson's death, and today they are a beloved community treasure (photos below from Davis Lokal Wiki, attributed to LocalWiki Contributors). 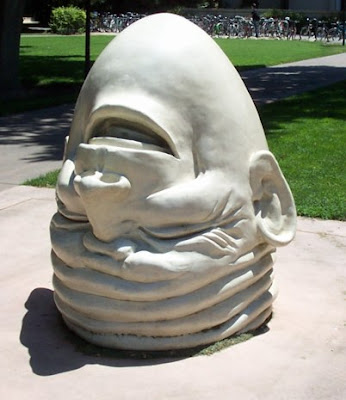 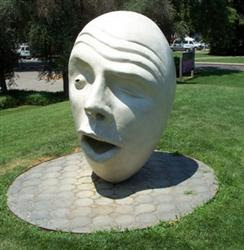 Amazing how much I still don't know about a town I've lived in longer than anywhere else in my life. Even more amusing is the fact than a lowly agave was the catalyst for this unexpected journey of discovery 10 minutes from my own house.