- February 28, 2017
The UC Davis campus has quite a few aloe plantings that I like to keep an eye on. These are not in the Arboretum but rather on the main campus so students walk by them every day.

Last year, the peak of the bloom was in early February. Overall, it was a very good year for flowers.

This year we're several weeks behind schedule because of the long periods of rain and the attendant lack of sunshine. In addition, some species, most notably Aloe hereroensis, were set back both by frost and an excess of rain. I don't think any of the Aloe hereroensis on campus will bloom normally this year; just like mine, their flowers sustained heavy frost damage. 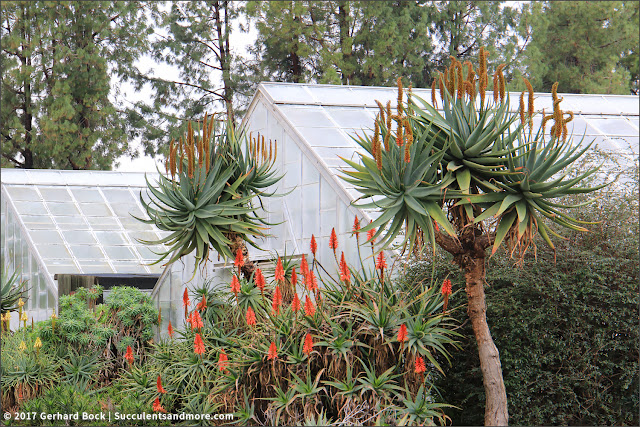 From the Botanical Conservatory I walked over to Storer Hall. Growing between two junipers is this Aloe arborescens:

In front of Storer Hall is the UC Davis Cycad Garden. The African cycads are interplanted with many different aloes.


In the next photo, look for a fallen giant. Hint: the roots are near the blue cycad in the lower left. This is an Aloe marlothii hybrid that once stood 10 ft. tall and toppled over in January as a result of the excessive rain that caused the ground to soften. 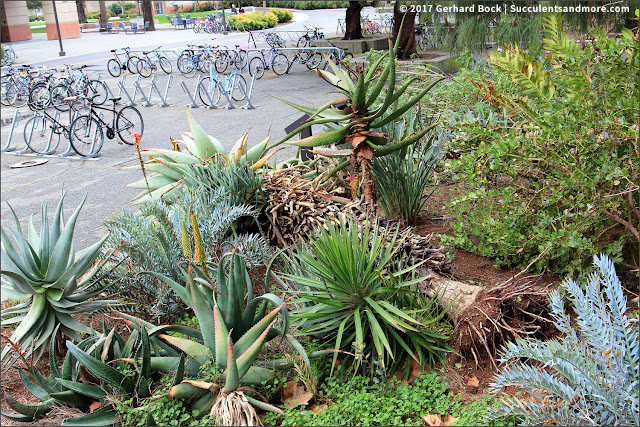 What's interesting here is that the flowers have continued to develop and are now facing straight up again--a 90° turn from where they were when the aloe fell over! 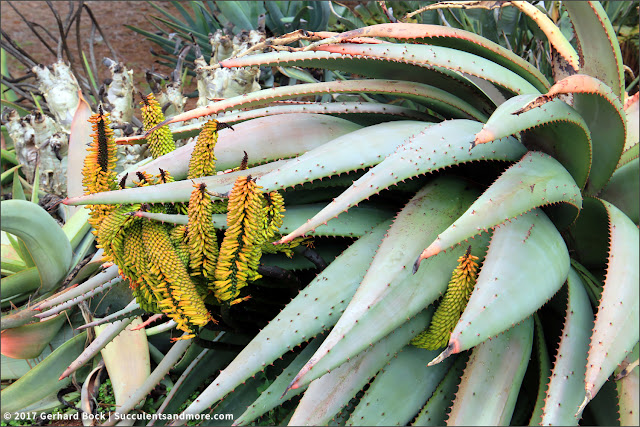 Here's a little Gasteria interlude. Gasterias are closely related to aloes--so close, in fact, that they're able to interbreed. Quite a few intergeneric hybrids exist. They're called ×Gasteraloe or ×Gastrolea. 'Green Ice' and 'Lizard Tail' are probably the best known.


The genus name Gasteria comes from the Latin word "gaster" (stomach). This is a reference to the flowers, which are vaguely stomach-shaped:


Across from Storer Hall there's a path between the Sciences Lab Building and Haring Hall. Here you’ll find several beds planted with aloes, euphorbias and other African succulents.


The nicest aloe planting is next to the Sciences Lab Building along Hutchison Drive:

Walking back to the Botanical Conservatory where I had parked, I noticed a new planting at the western edge of the parking lot. I can't wait to see what this area will look like in a year or two.

Near where I had parked I spotted this pickup truck with a bunch of cactus stems in the trunk: 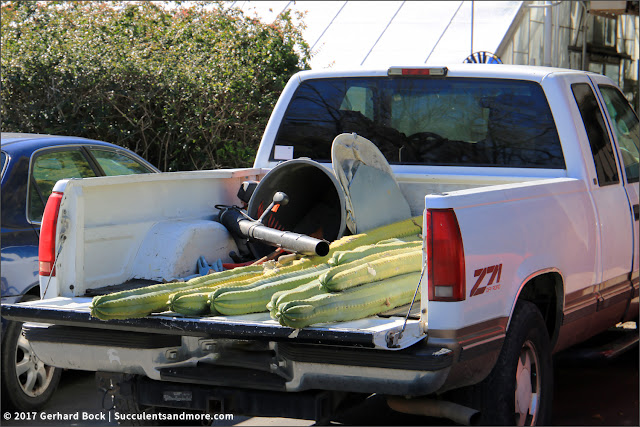 I have no idea what the story is there, but I'm hoping they're going to plant them somewhere on campus.