Virtually all of our succulents are planted in well-draining soil (garden soil heavily amended with inorganic materials such as pumice, lava rock or small gravel). This has allowed them to withstand months of wet soil. So far we haven't had any plants rotting from the bottom up. But the 25.30 inches of rain that has fallen since November has had a damaging effect in other ways. A few agaves and aloes have started to rot from the top down.

The first major victim is a beautiful Agave pumila in the front yard. I blogged about it on January 31 in this post. I had every intention of doing what reader Daniel had suggested--dig it up, treat the infection, dry it out, pot it in soil with little to no organic content--but never got around to. But I did spray it with a fungicide called Daconil and have been protecting it against the rain since then. 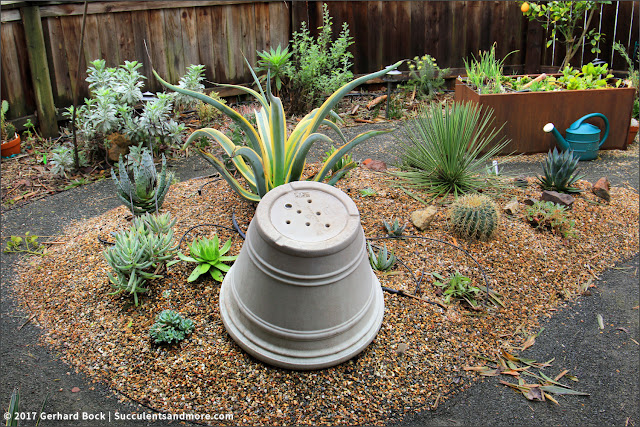 I remove the pot on dry days to allow air and sunlight to work on the lesions but I'm not sure that this Agave pumila will survive. 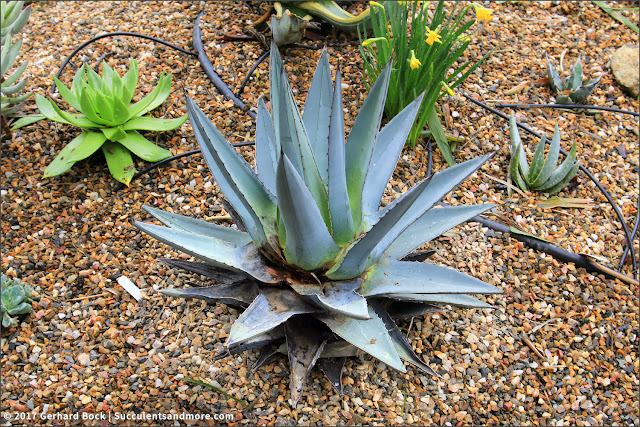 Another favorite agave of mine, Agave 'Sunspot', gets protected against the rain now: 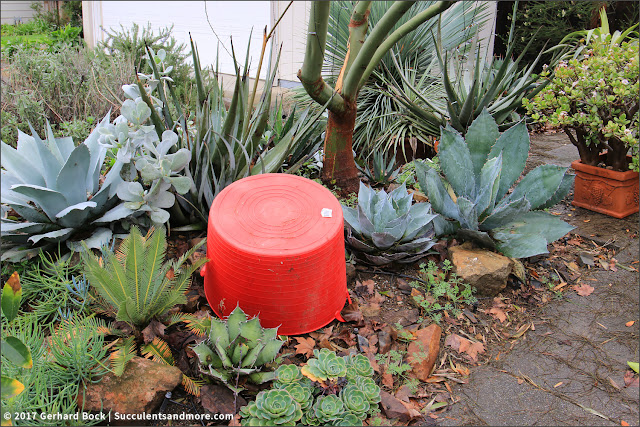 It, too, has developed rot. 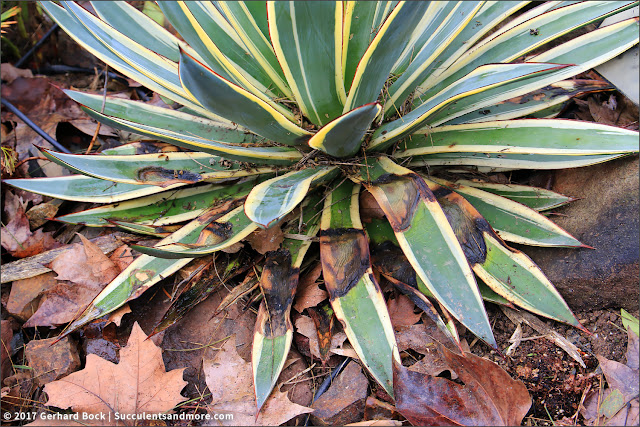 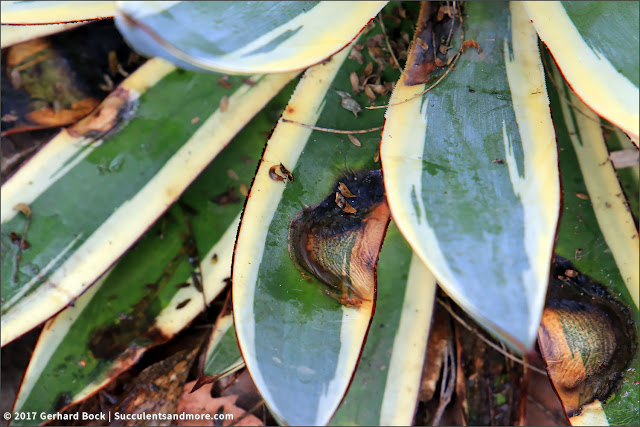 It sprayed it with Daconil in hopes it will stop the spread.

Two other agaves near 'Sunspot' are showing signs of rot on the lower leaves. This is Agave 'Mad Cow', a hybrid between Agave colorata and Agave bovicornuta. 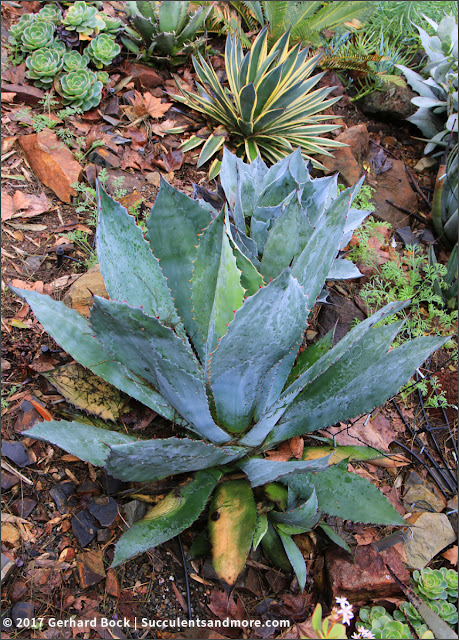 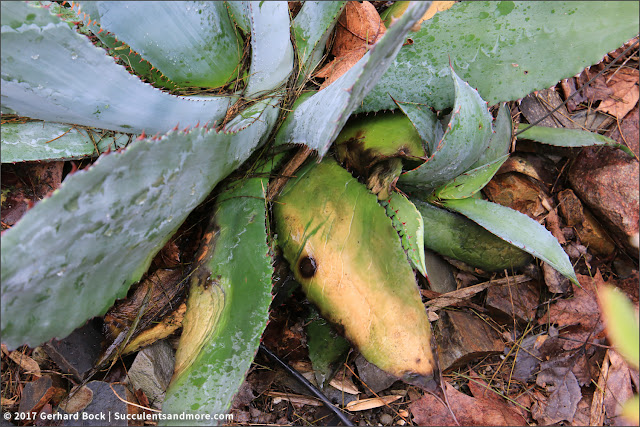 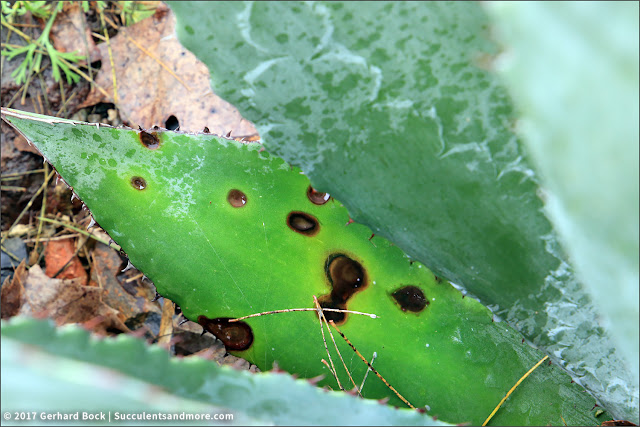 And this is Agave parrasana: 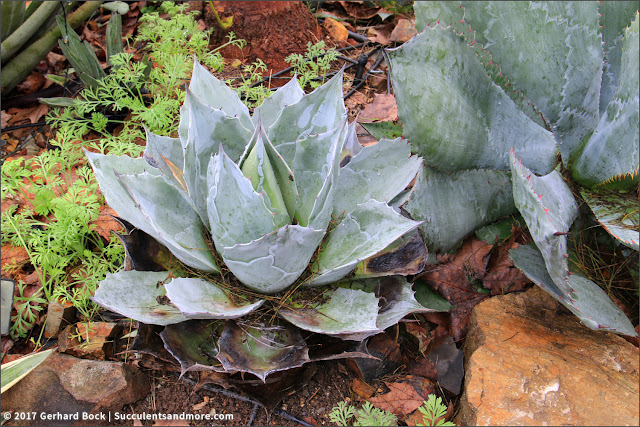 Agave 'Joe Hoak' has a rot on some leaves in the middle: 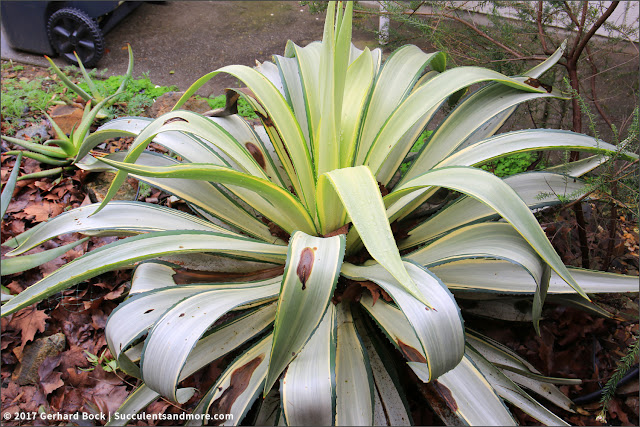 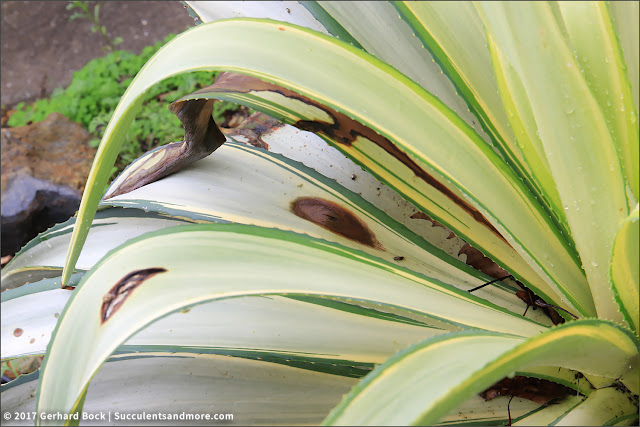 My recently declumped and replanted ×Mangave 'Macho Mocha' has a few spots of rot, as well as snail damage: 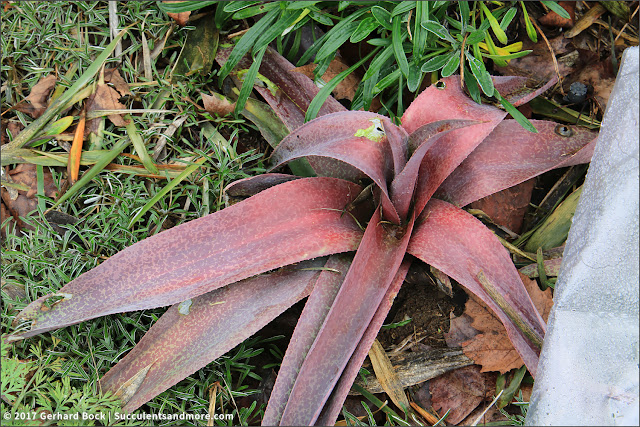 Agave weberi 'Arizona Star', one of my favorites outside the front yard fence, has developed multiple brown spots that are spreading. It's too large to protect with an upended flower pot or trug so I threw up a quick shelter: 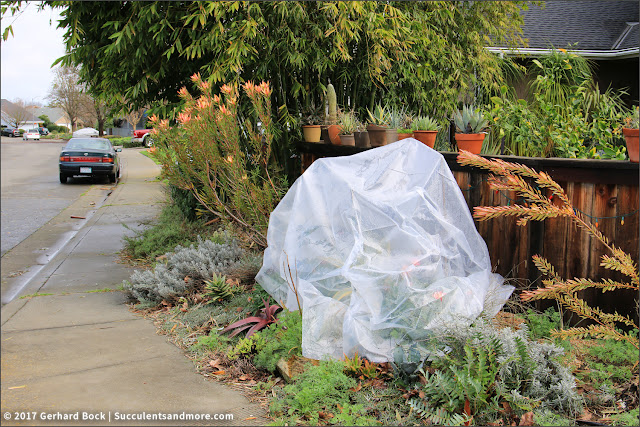 The shelter keeps the rain out but allows enough air in so the plants underneath the plastic don't suffocate. But when the sun comes out again, I need to take the plastic down. Otherwise it will get too hot inside. 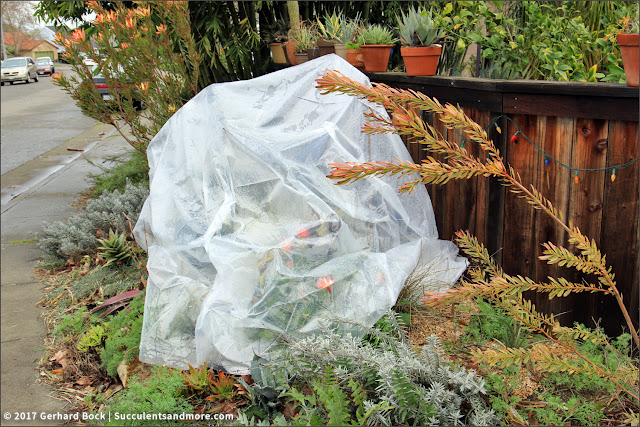 More damage in the front yard:

Most plants in the backyard are safe, but a few agaves in pots have rotted so much that I'm not sure they will survive.

The first two you see below, Agave lophantha 'Quadricolor' and Agave ghiesbreghtii, sustained leaf damage when a nearby clump of 'Alphonse Karr' bamboo was removed in December. The wounds weren't able to heal because of the rain, allowing rot to develop and rapidly advance. 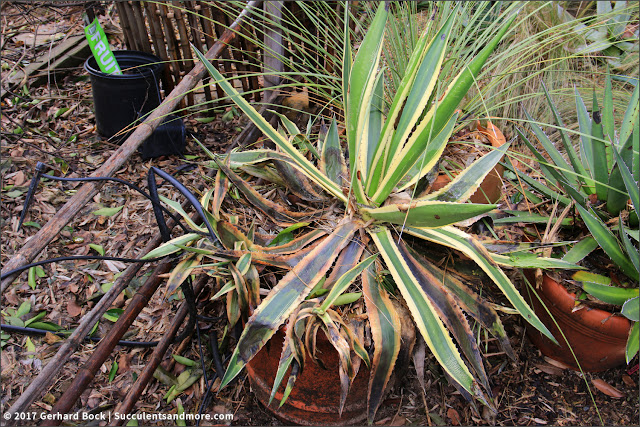 It looks shocking, doesn't it? I've given up on this agave. I'm only keeping it around to see how far this will go. I have plenty of Agave lophantha 'Quadricolor' pups to start from scratch. 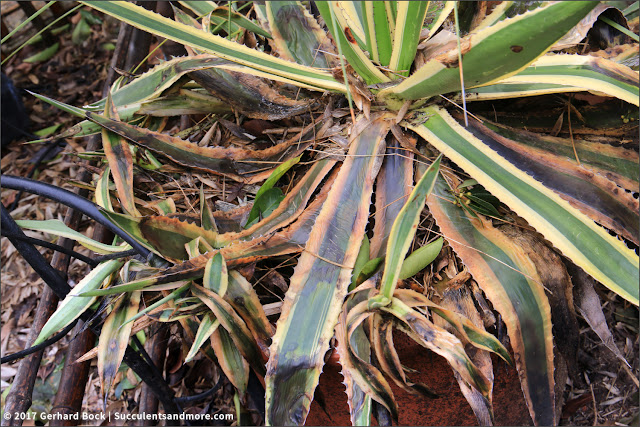 Agave ghiesbreghtii looks better. I'm hoping it will pull through. 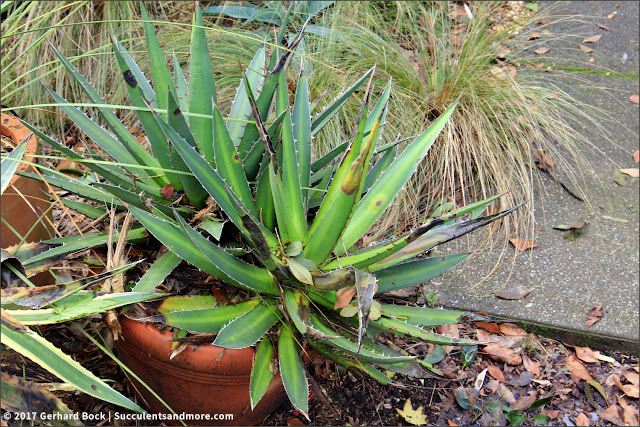 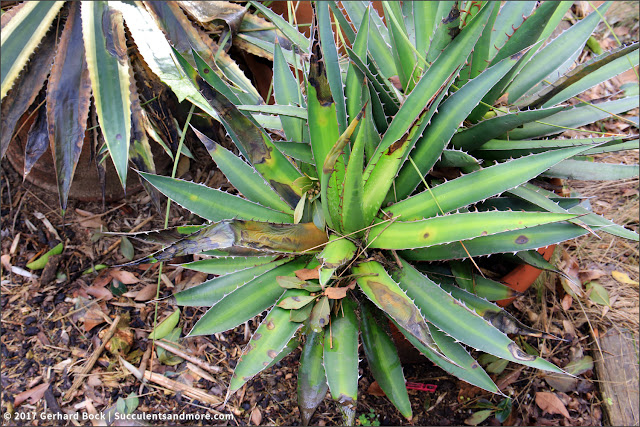 The regular blue form of Agave americana seems impervious to the rain, but 'Mediopicta alba' appears to be susceptible to rot. 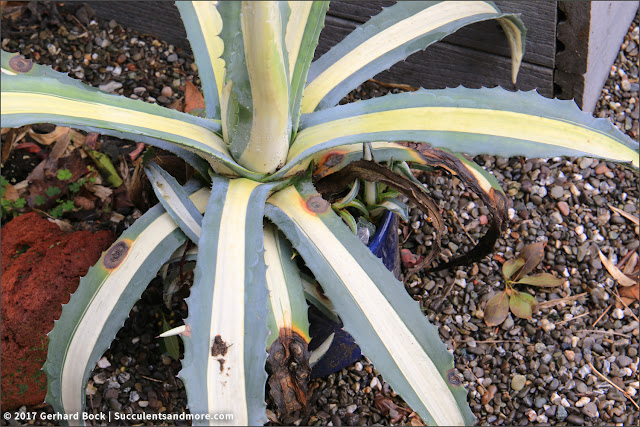 And finally my favorite echeveria, Echerveria cante. It looked great not long ago but the rain has finally taken its toll. I will dig it up, clean it, and leave it on the porch for now where it will be protected from the elements. 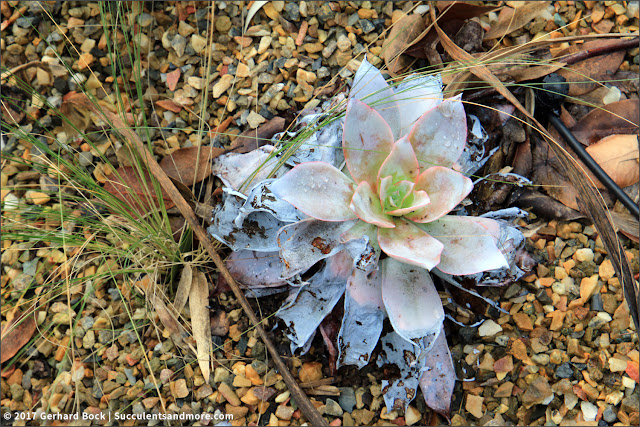 But as bad as these images look, the majority of our succulents are fine, with no signs of rot. I'm keeping my fingers crossed that it will stay that way. And that we will finally have a few weeks of dry, sunny weather.
agave Agave pumila rot winter damage
Location: Davis, Kalifornien, USA