On November 7, 2013 I featured Sansevieria suffruticosa as my “plant of the week” (initially thinking it was Sansevieria cylindrica because it was labeled as such when I bought it). For whatever reason, that post has been one of the most frequently viewed posts on my blog. Maybe because more and more plants lovers—succulents fanatics or not—are discovering sansevierias?

It’s time to take another look at my Sansevieria suffruticosa and some others that have joined the collection since then!

This is the original plant: 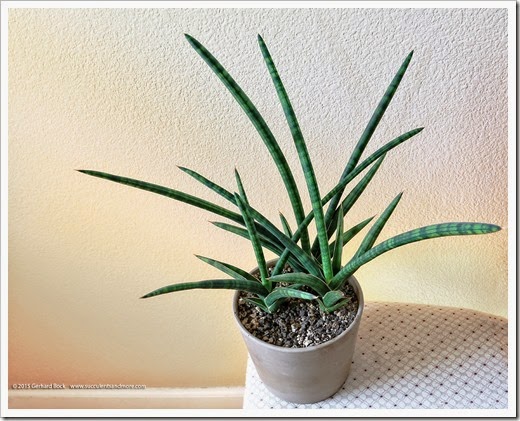 It looks pretty much the same but has definitely grown.

A real Sansevieria cylindrica joined the club last fall. It’s a fan-shaped plant with significantly longer leaves, one of which curves down quite rakishly: 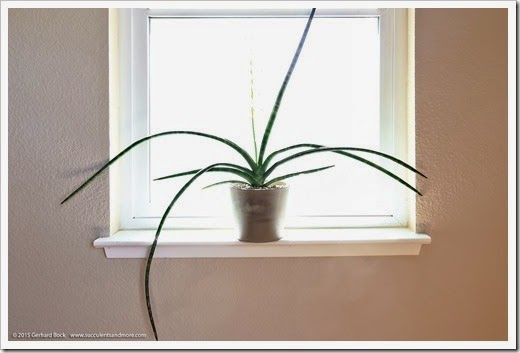 It surprised the heck out of me when it sent up a flower stalk. 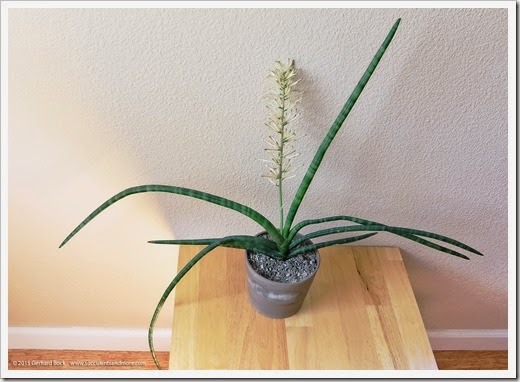 While not the most stunning inflorescence I’ve ever laid my eyes on, it complements the leaves quite well. 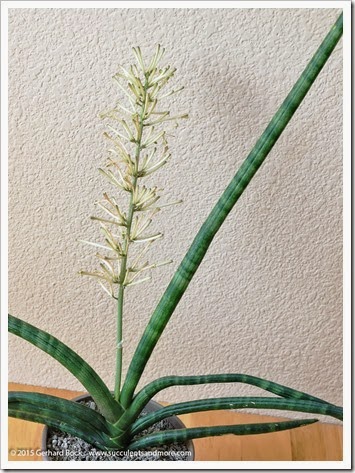 The flowers themselves are long and thin. The hummingbirds would go crazy if this plant were outside… 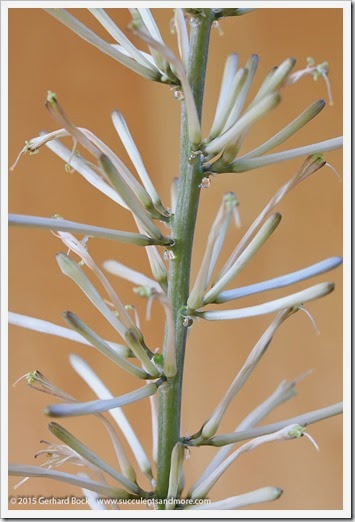 …especially since there’s so much nectar, it’s forming beads at the base of the flowers. (It’s quite sticky and presumably sweet.) 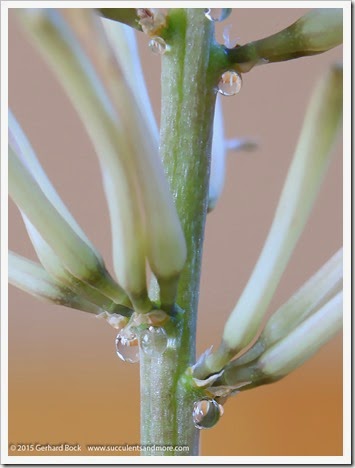 For more information about Sansevieria cylindrica, please refer to my original post.

My third sansevieria, Sansevieria schweinfurthii (synonym Sansevieria erythraeae), has turned out to be a glacially slow grower. I think it’s still the same size it was a year and a half ago when I won it in a plant raffle at the Sacramento Cactus & Succulent Society. I recently repotted it and the roots filled the previous pot so it’s definitely doing OK. 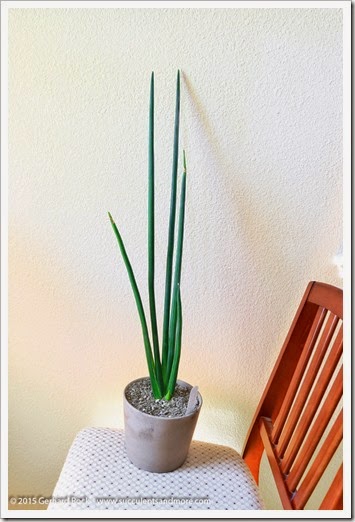 In terms of appearance, Sansevieria cylindrica and Sansevieria schweinfurthii are fairly similar: long green tubes, either curving or upright. Here are the three of them in their home in the loft: 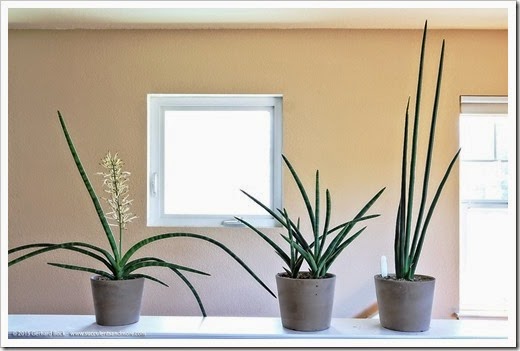 While this is fairly bright room, there’s very little direct light. For a long time, the flowering Sansevieria cylindrica was on the sill of the window you see on the right. That’s probably the reason why it flowered in the first place. However, its new pot is a bit too large for the window sill so I had to move it.

My fourth sansevieria looks completely different. In fact, most people think it’s an agave (I did, too, at first): 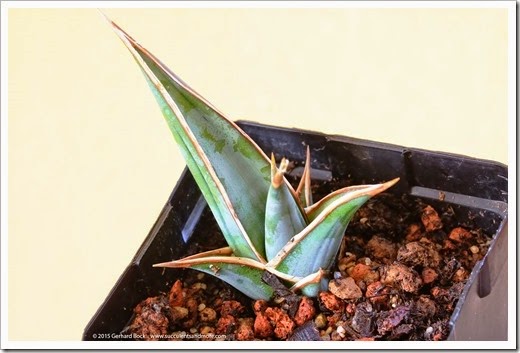 This rarity is called Sansevieria pinguicula. I first saw one at Arid Lands Greenhouses in Tucson, AZ during my trip at the end of December 2014: 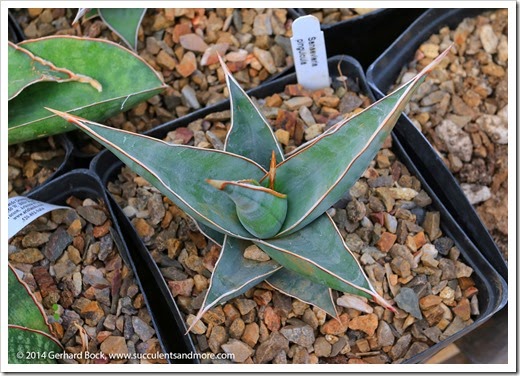 This was a larger specimen, and I shouldn’t have left Arid Lands without it. But I did. Fortunately, I found the smaller plant you see above locally. It will grow in time, just not very quickly.

Sansevieria pinguicula is a true oddity. Mature plants form aerial stolons which end in new plants. They, in turn, form stilt roots which give the impression of the babies walking away from the mother plant (hence the common name, “walking sanseviera”). This photo is a good illustration.

Sansevieria pinguicula comes from one of the most arid regions of Kenya and in cultivation can go weeks without irrigation. In fact, it seems that most, if not all, sansevierias are extremely tolerant of dry conditions. In my book, that makes them perfect (house) plants.

In case you’re wondering, all of these sansevieras would do just fine outside from spring through fall, but they’re very sensitive to cold temperatures and wouldn’t be able to survive long at or near freezing.

Plant of the Week sansevieria