In my last post I showed you the impressive gardens of the Surf Motel in Fort Bragg, CA. Just a few miles south on Highway 1 is another very special place I didn’t even know existed: the Mendocino Coast Botanical Gardens (MCBG). I have been up and down Highway 1 any number of times—although not in recent years—and through some unexplainable quirk of cosmic irony I missed the MCBG each time. 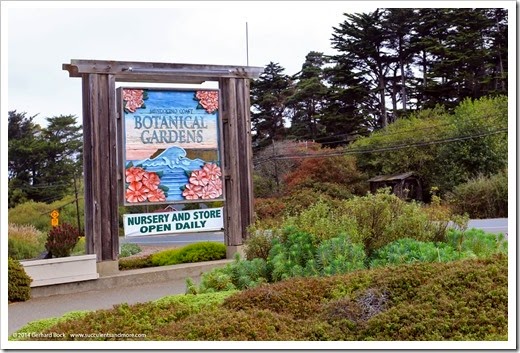 The 47-acre Mendocino Coast Botanical Gardens, whose web site address is the aptly named www.gardenbythesea.org, was founded in 1961 as a private enterprise. It went through some trial and tribulations over the decades, like many private gardens do, but has been under stable management since 1990. In 2013, the MCBG was ranked as the #2 public garden in the western U.S. by Sunset Magazine. (I missed that list of top public gardens, too, although I read Sunset somewhat regularly.) 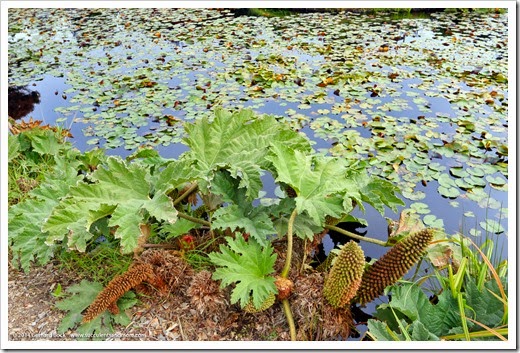 The MBCG is world-renowned for its collection of rhododendrons, comprising virtually every type in existence (294 different varieties). That alone is a reason to come back in the spring when they are in bloom. Other outstanding collections include camellias (54 varieties), conifers (154 varieties), and heaths and heathers (143 varieties in the genera Calluna, Daboecia, and Erica). 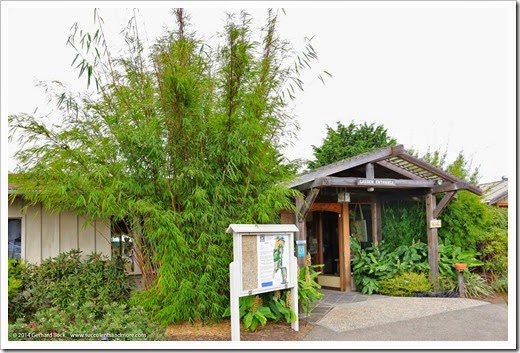 Entrance dominated by a stunning clump of Himalayacalamus hookerianus 'Teague's Blue', a rare clumping bamboo from the foothills of the Himalayas

By necessity my visit was very brief, so I didn’t have time to check out the entire garden. The lower section, which is more naturalistic, apparently has spectacular ocean views, but I didn’t make it that far. Another reason to come back! 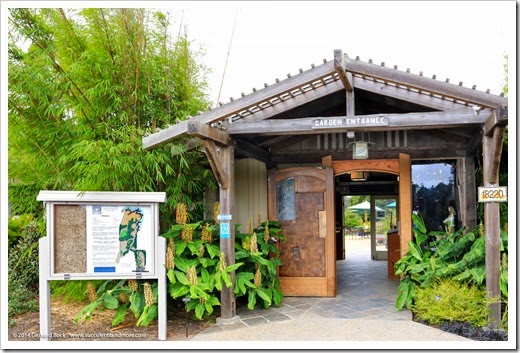 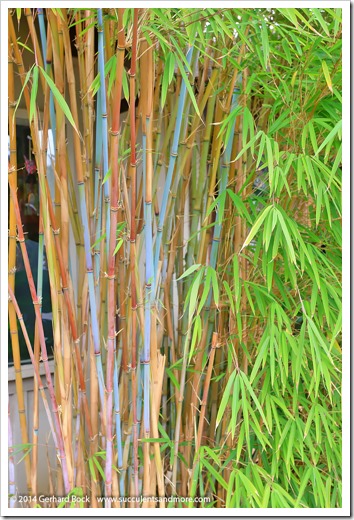 As soon as I entered the garden, I saw the sign below. Even though I was there a week early, I knew where to go first: the nursery. 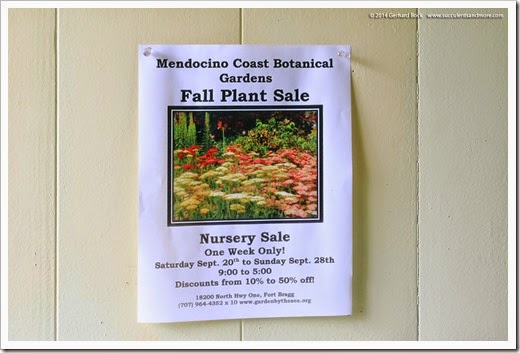 Usually I save the nursery for last, but since it was right there next to the entrance, I couldn’t resist its siren call.

While the nursery isn’t large, it had a great selection of some of my favorite types of plants, including southern hemisphere shrubs like grevilleas from Australia and leucadendrons from South Africa. Here are some photos to whet your appetite. 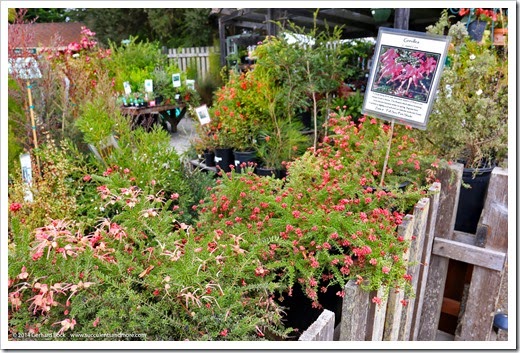 Grevillea lanigera ‘Coastal Gem’. This selection is widely available in California. I killed one a few years ago because I didn’t water it enough while it was getting established, but I recently bought another one. Just waiting for the weather to cool before I plant it. 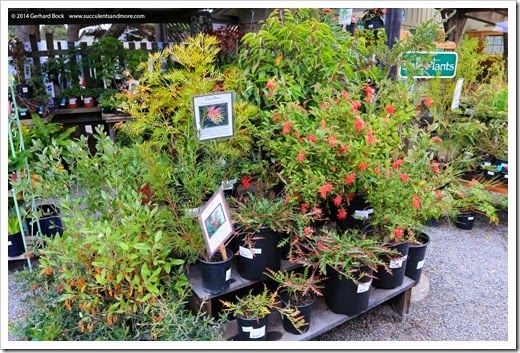 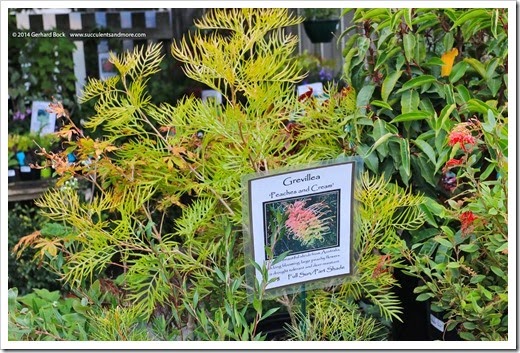 Grevillea ‘Peaches and Cream’, just released in the U.S. in 2013 and still difficult to find. I was very excited to see a large 5-gallon specimen (the only one) and quickly snapped it up. It will go in the front yard next to the Bambusa oldhamii. 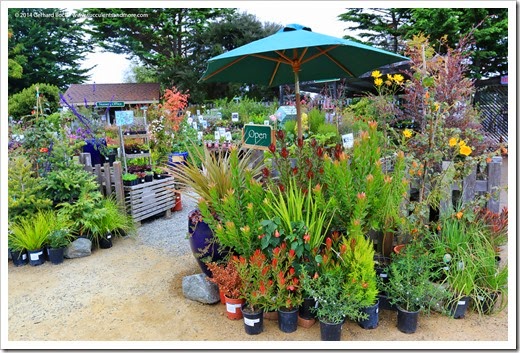 Leucadendrons from South Africa are just as exciting as grevilleas 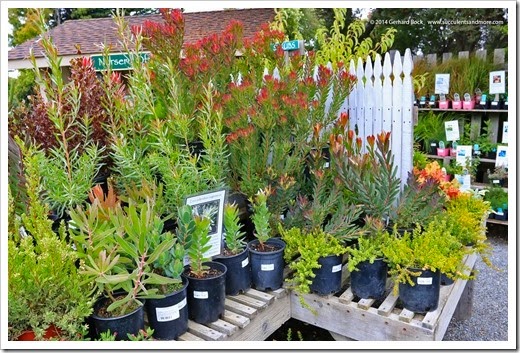 So many favorites on one table! I was pleased to find a 1-gallon Leucadendron argenteum, the fabled silver tree, at a much more reasonable price than what it usually sells for. 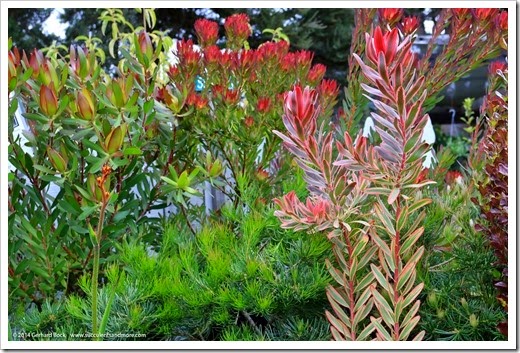 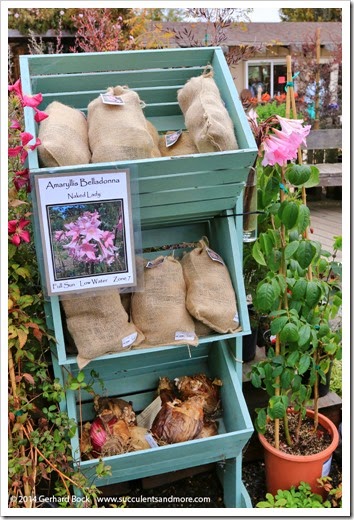 Naked lady (Amaryillis belladonna), endemic to South Africa’s Cape Province but naturalized all along the north coast of California—to the point where many people think naked ladies are native to California! As common as they may be in gardens and along roadsides, I’ve rarely seen them for sale in a nursery. 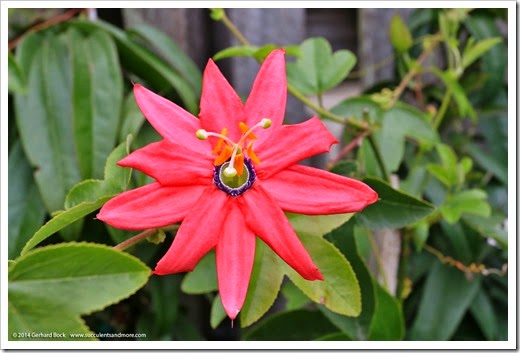 Passiflora ‘Coral Seas’, a truly spectacular passionflower hybrid with a long blooming period. Unfortunately, it doesn’t like hot summers and isn’t very hardy, so growing it in Davis would be out of the question. 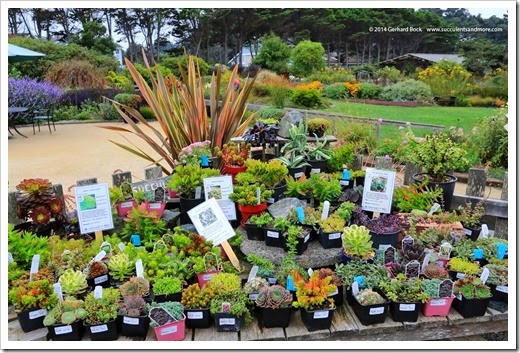 The succulent section wasn’t large but it had a good selection of what grows well on the north coast. True desert plants don’t fare too well here because it isn’t hot enough. 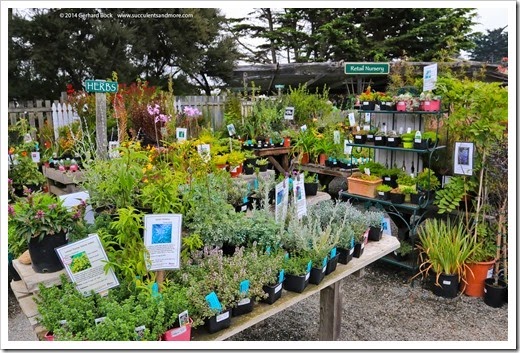 I think herbs are underused as landscape plants 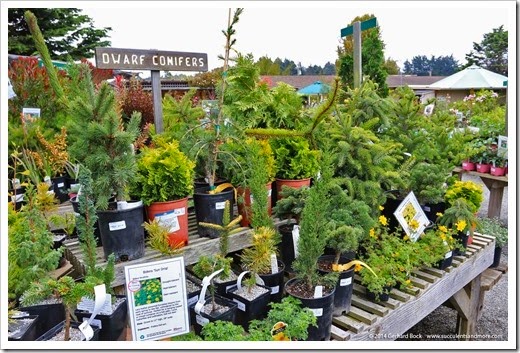 An eclectic selection conifers, including many dwarf varieties 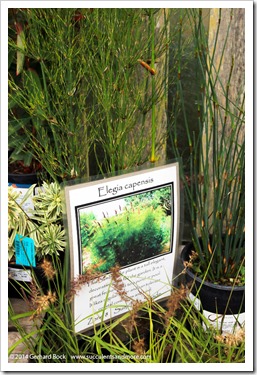 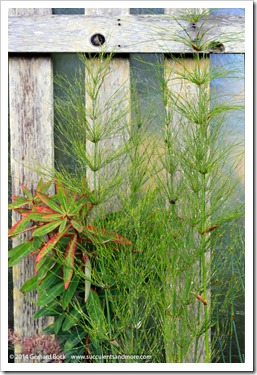 Elegia capensis, rarely seen in nurseries. The Surf Motel up the street from the MCBG had a magnificent specimen. I tried growing it in Davis once but failed (summer heat, not enough water) so I passed it by with a heavy heart. 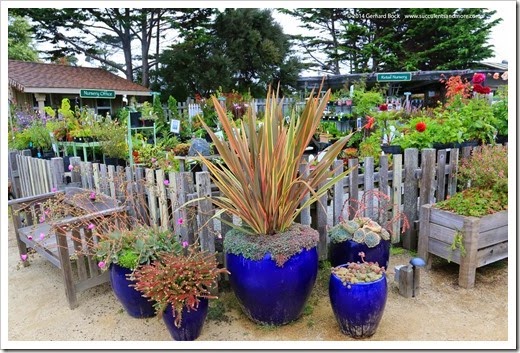 A final look at the nursery

After paying for my plant purchases and taking them back to the car, it was finally time to walk down into the garden proper. 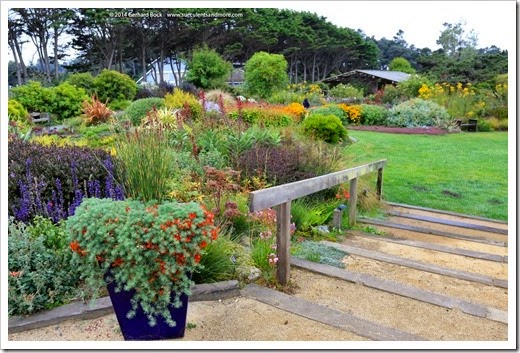 This pot featuring Chondropetalum elephantinum, a restio from South Africa, and parrot’s beak (Lotus berthelotii), a trailing perennial from the Canary Islands, made me feel very welcome. 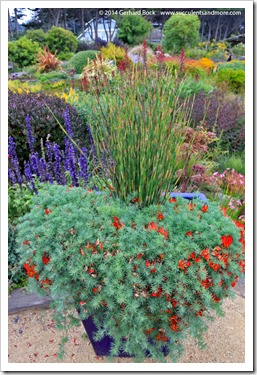 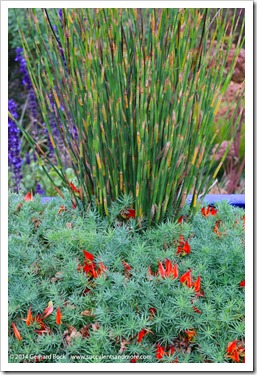 In my next post we’ll walk down the steps you saw above and explore the perennial beds. You’re in for quite a visual feast!