At this year’s Succulent Extravaganza, Brian Kemble, the curator of the Ruth Bancroft Garden and one of the country’s preeminent succulent experts, continued his tradition of leading folks on a walking tour of the Succulent Gardens growing grounds. Brian is one of the most unassuming yet knowledgeable plant experts you’ll ever meet, and I pay very close attention to what he says. One of his best pieces of advice this year rang very true: When designing a new garden space, it’s OK to use slower-growing plants as anchors and fill in with faster-growing plants that need to be taken out as they outgrow their allotted spot.

Instinctively, or by sheer luck, that’s what I did when I chose the plants for the desert bed we created this spring along the perimeter of our property. The backbone of this bed are the succulents—tree aloes like Aloe ‘Hercules’ and Aloe ferox, tree-sized yuccas like Yucca rostrata, an actual tree (‘Sonoran Emerald’ palo verde) and a score of slower-growing aloes and agaves. The infill plants were globemallow (Sphaeralcea ‘Newleaze Coral’), gaura (Gaura lindheimerii ‘Snow Fountain’) and other low-water perennials as well as whatever came up from a packet of Dry Lands seed mix I sprinkled on the western section of this bed (plants like baby’s breath, bachelor’s button, blanket flower, and thread-leaf coreopsis).

In just six short months, some of the perennials had grown so quickly and so large that they were making the bed look unbalanced (another instance of the “I didn’t think it would get this big” syndrome I talked about yesterday). Time for some judicious editing, i.e. removing the plants that had outgrown their spot and adding others (primarily succulents) that will stay small for much longer.

Let’s take a look at the result: 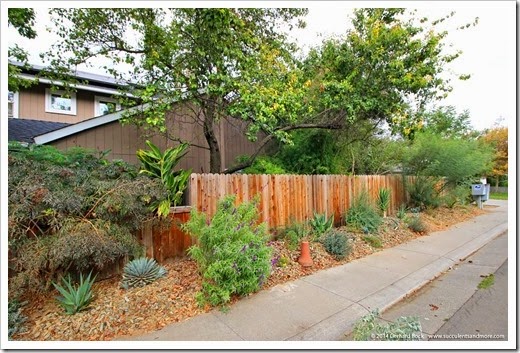 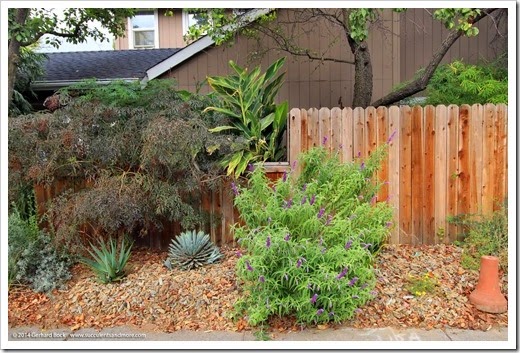 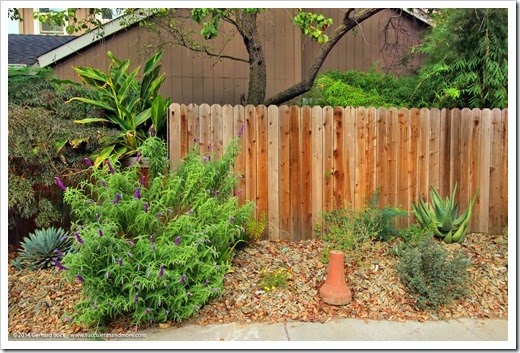 I’m keeping a close eye on this Mexican bush sage (Salvia leucantha). It’s starting to engulf an Aloe cameronii and Agave gentryi ‘Jaws’. I do enjoy the flowers of the Mexican bush sage so I’ll keep it around for now, although carefully pruned. 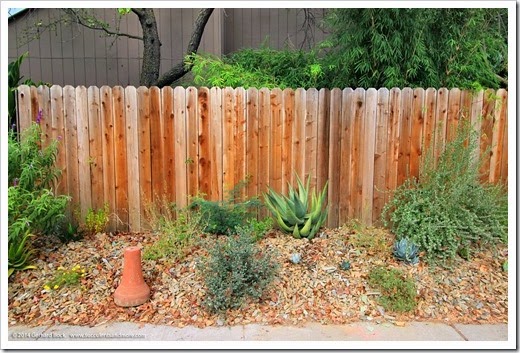 Here I removed a globemallow (Sphaeralcea ‘Newleaze Coral’) to the right of the Mexican bush sage and a brittlebush (Encelia farinosa) to the left of the Aloe ferox. 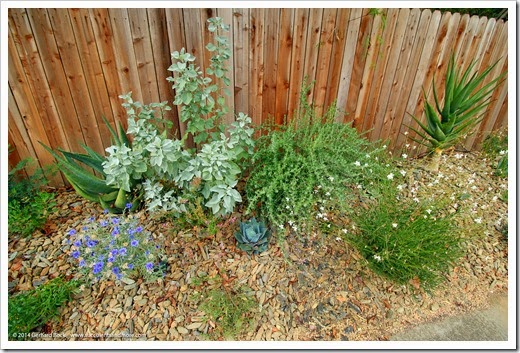 Look how much the brittlebush had crowded the Aloe ferox (photo taken on August 10, 2014) 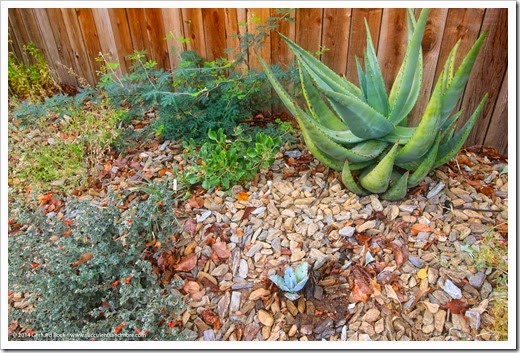 In front of the Aloe ferox I removed a small Agave pelona offset that had been declining since I planted it in the spring. I have no idea why. In theory, it should have done well here. I replaced it with an Agave zebra which thrives in hot and dry spots. 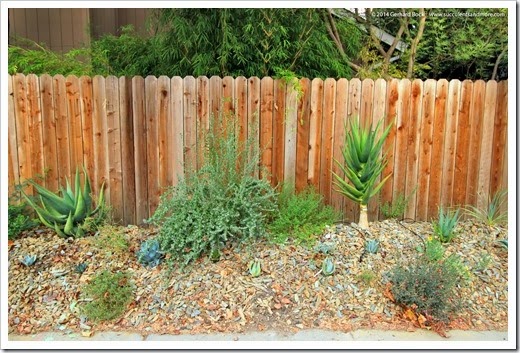 The Texas ranger (Leucophyllum frutescens ‘Compactum’) between the Aloe ferox (left) and Aloe ‘Hercules’ (right) needs pruning soon to keep it off the Agave parrasana to the left of it. 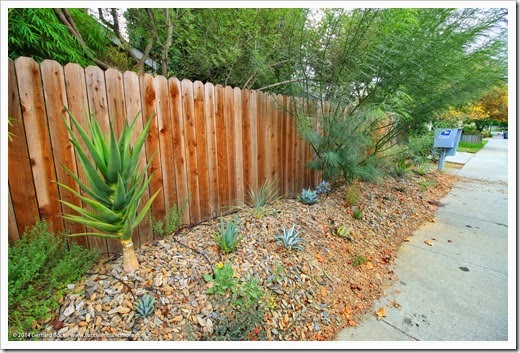 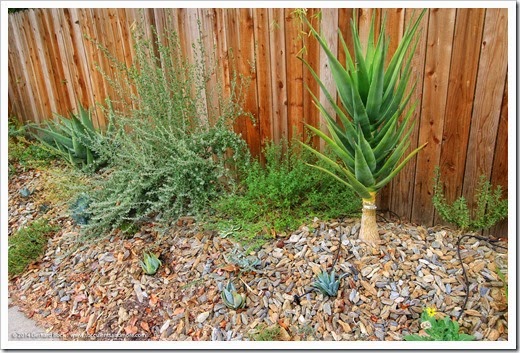 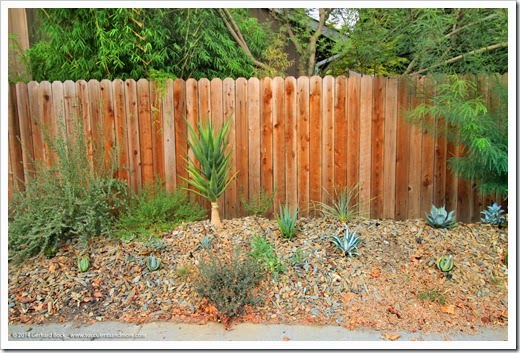 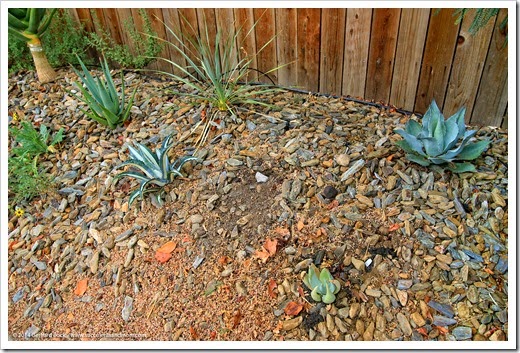 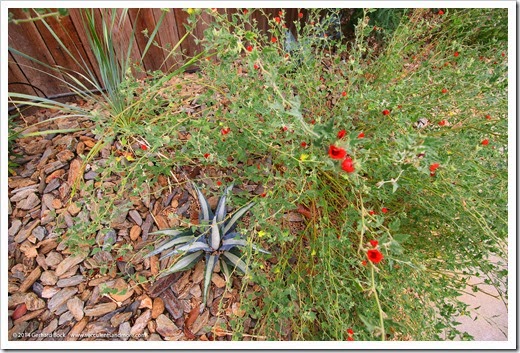 This globemallow is now gone 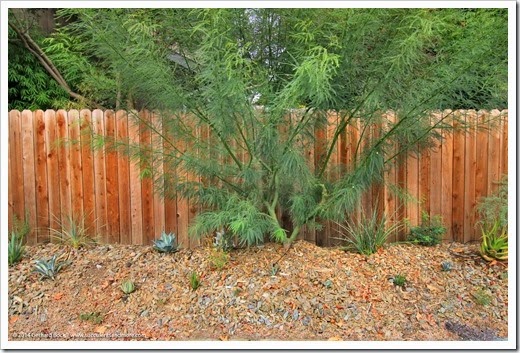 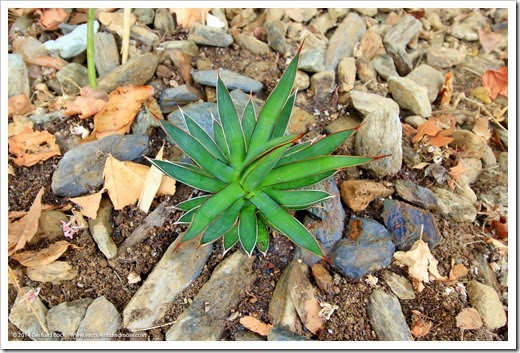 This Agave ocahui var. ocahui is a new addition in front of the palo verde. It will grow to 2 ft. over time. 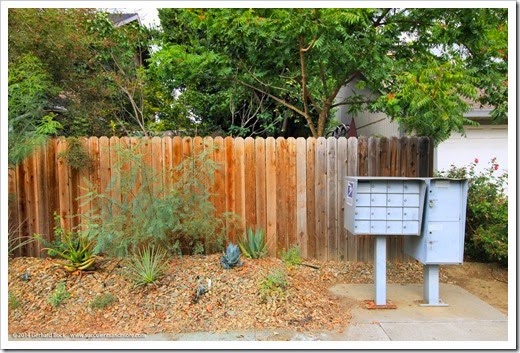 The corner by the mailboxes looks cleaner now after removing both a globemallow and a gaura ‘Snow Fountain’ (see photo below). In their stead, I planted two electric blue sages (Salvia chamaedryoides) and two Mexican hats (Ratibida columnifera var. pulcherrima). 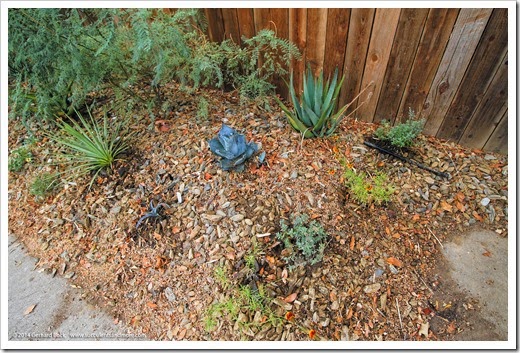 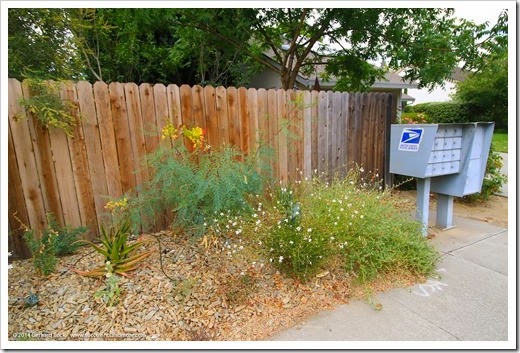 This is what this corner looked like in early August, with both the globemallow (Sphaeralcea ‘Newleaze Coral’) and gaura (Gaura lindheimerii ‘Snow Fountain’) in place 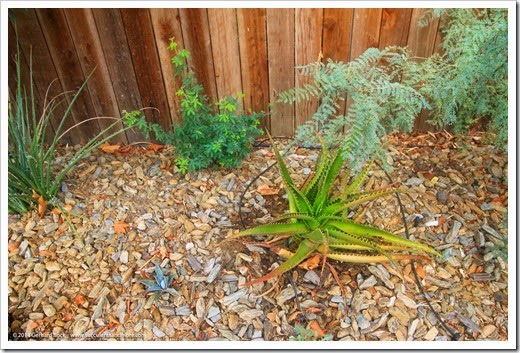 Aloe ‘Erik the Red’ is an early summer addition; the Agave mckelveyana to left of it has been there since April and has produced a couple of babies already 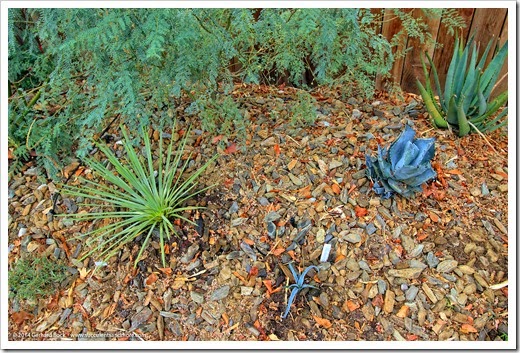 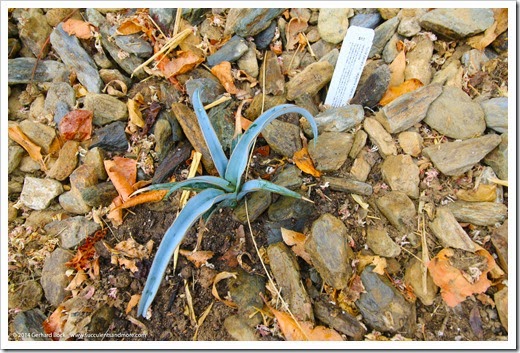 Yucca baccata var. vespertina 'Hualampai Blue’, one of the plants Loree ‘Danger Garden’ Bohl bought for me at Cistus Nursery in Portland 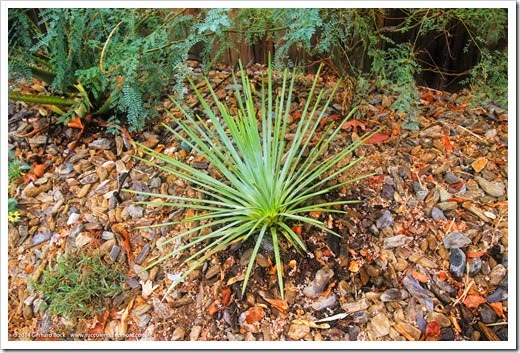 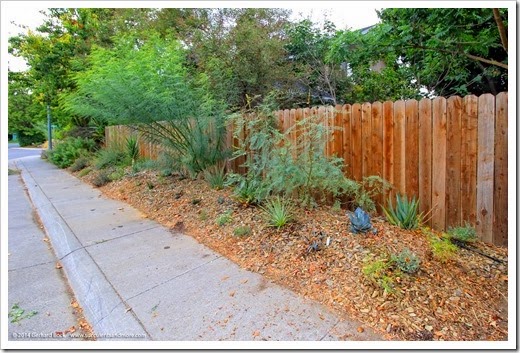 Standing near the mailboxes and looking west 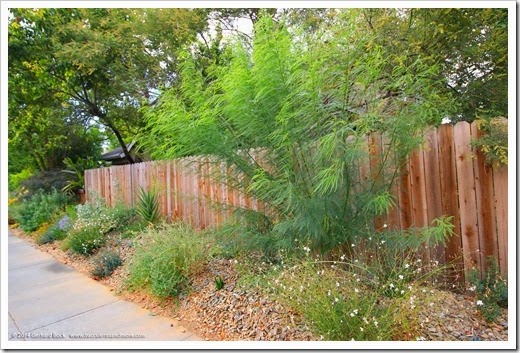 Same view in early August. You can see how much I’ve taken out, not just the two gauras on either side of the palo verde, but also many of the seed-grown annuals further on the left.