A few weeks ago we cut down a purple-leaf cherry plum tree (Prunus cerasifera ‘Krauter Vesuvius’) in the front yard because it had gotten to be too messy. Initially I had considered replacing it with a blue jacaranda (Jacaranda mimosifolia) but after further research I decided against it: As beautiful as the blue jacaranda is, it, too, has a reputation for being messy, always dropping something. 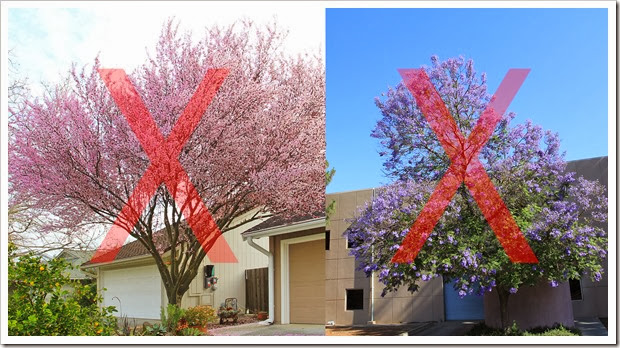 I briefly considered a purple fernleaf acacia (Acacia baileyana ‘Purpurea’) because of its sexy first-purple-then-silver leaves and its bright yellow flowers but some people say its branches become weak over time and break.

Finally it occurred to me that this spot would actually be ideal for one of my favorite trees of all: a palo verde (Parkisonsia sp.). To me, the palo verde (Spanish for “green stick”) is the quintessential desert tree. Its green bark capable of photosynthesis and its tiny leaves optimized to prevent evaporation show how perfectly adapted it is to arid climates. 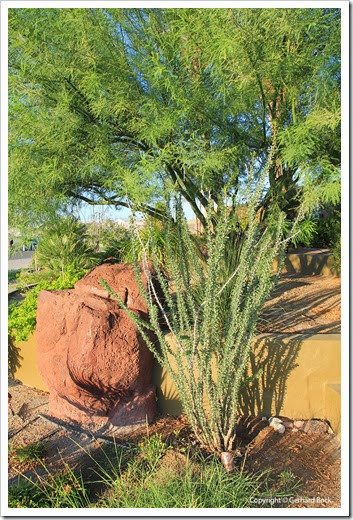 Palo verde species in front of a motel in Needles, CA
(the “shrub” in the foreground is an ocotillo, Fouquieria splendens)

In the Sonora desert, the palo verde not only provides habitat for birds, it’s a nurse tree for saguaros, sheltering the young cacti from the intense sun in the summer and the cold in the winter. Obviously these facts don’t matter much in our case—the Sacramento Valley is famously devoid of saguaros—but they’re still cool to know. 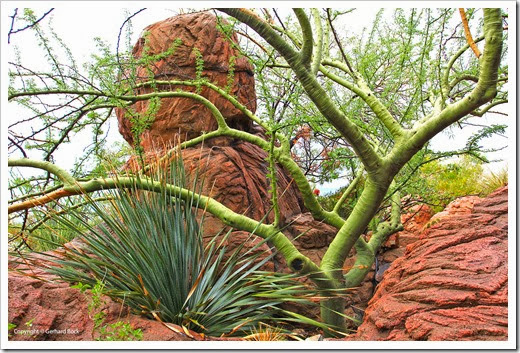 Palo verde species at the Arizona-Sonora Desert Museum in Tucson.
Who knows, it may even be the ‘Desert Museum’ hybrid! 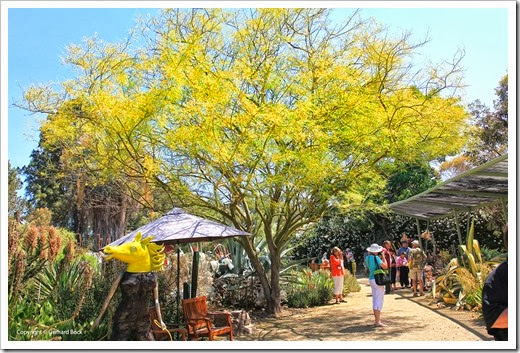 The ‘Desert Museum’ hybrid grows to a very manageable 20-25 ft. and combines the best qualities of each of its parents: 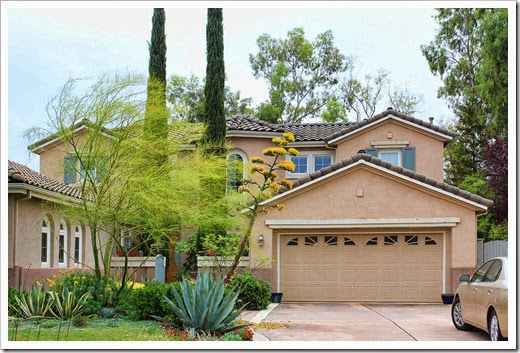 After reading many glowing reviews about ‘Desert Museum’, I decided that it would be the ideal replacement for our cherry plum; my wife agreed whole-heartedly. It felt good to have come to a decision. The most difficult part—the selection process—was now over and the rest was going to be smooth sailing.

It quickly became clear that deciding on a tree is one thing, finding a specimen is another. I first contacted a small family-owned nursery here in Davis, Redwood Barn Nursery. The owner, Don Shor, is a well-known plant expert with a wealth of knowledge. He assured me that palo verdes grow great in our area but unfortunately they are a hard sell (probably because most homeowners are not familiar with them) and none of his suppliers carry them. 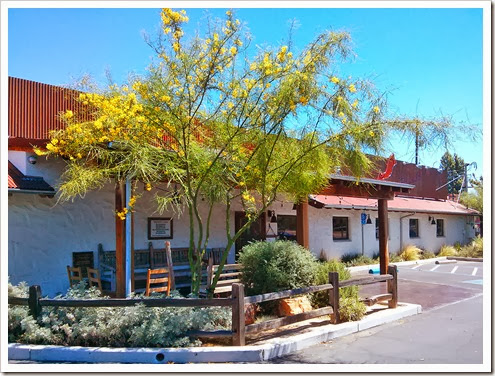 I then tried Green Acres in Sacramento, the largest retail nursery in the Sacramento Valley. Since they carry Monrovia products and Monrovia has the ‘Desert Museum’ palo verde in their catalog, I was hopeful they might be able to special-order one for me. Unfortunately, the person in charge of ordering never responded to my attempts to reach her (I even left her a note during a personal visit to the nursery).

Calls to other nurseries in our area didn’t go anywhere. None of them carried any variety of palo verde, let alone the one I wanted, and none was able to special-order one. 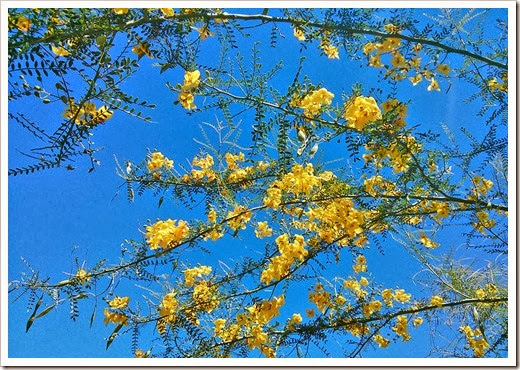 A web search led me to the Lowe’s web site which lists both the blue palo verde and the ‘Desert Museum’ hybrid. I was thrilled: $37.66 for a 10¼-gallon plant! I called three Lowe’s stores in the area; two were not responsive but the nursery manager at one store told me that this tree would have to be special-ordered from a specific supplier and that they wouldn’t be able to place an order until a certain minimum was reached, which wasn’t likely for many months to come. I do understand the economics, but it’s still extremely frustrating because I bet that just about any Lowe’s store in Phoenix or Tucson has the ‘Desert Museum’ palo verde in stock.

At this point I decided to expand my search to wholesale growers which have ‘Desert Museum’ in their inventory in hopes of getting a referral to a retail nursery that would be willing to place a special order.

Boething Treeland Farms referred me to Green Acres (see above) and to Home Depot. I decided not to follow up on the Home Depot lead, figuring their policy would be the same as Lowe’s.

Village Nurseries, one of the largest plant growers in California, was next. In addition to growing grounds in Northern and Southern California, they also operate five landscape centers (including one in Sacramento) aimed at landscape contractors and other bulk plant buyers. When their rep returned my call, I was mentally prepared for more disappointment. Imagine my surprise when Jeanie, the wonderful lady I spoke with, not only knew what the ‘Desert Museum’ palo verde was (she loves it) but cheerfully told me that they would be happy to have one shipped from their Southern California growing grounds to their Sacramento location. I was so thrilled, I ordered two, one to replace the cherry plum and one to go on the other side of the front yard (it’ll replace the weaver’s bamboo that is too large for its spot). The price: a still reasonable $63.99 for a 15-gallon can.

My two palo verdes are scheduled to arrive in Sacramento tomorrow and will be ready for pickup on Monday. Please keep your fingers crossed that they will actually be there waiting for me!