Of avocados and agaves

On our way home from our visit to Santa Barbara, we decided to do some exploring in the hinterland of northwestern Ventura County. According to Wikipedia:

North of Highway 126, the county is mountainous and mostly uninhabited, and contains some of the most unspoiled, rugged and inaccessible wilderness remaining in southern California.

I love backroads, and State Route (SR) 33 crosses an area neither I nor my wife had ever been to before. 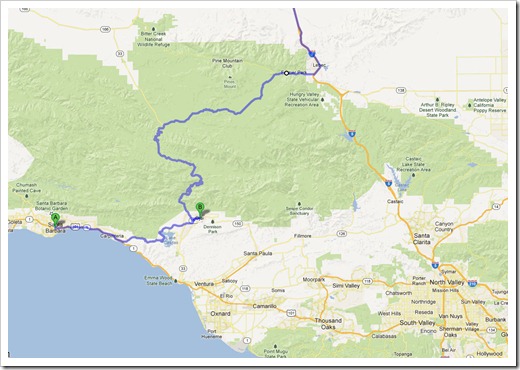 Map of our route from Santa Barbara to I-5

The initial stretch of Highway 33 beginning in the town of Ventura is called the “Ojai Freeway.” This is a bit of an exaggeration since this is a fairly windy country road that isn’t particularly fast. It quickly begins to climb into the hills where we found our first surprise: avocado orchards!

Avocado orchard along the Ojai Freeway

I had no idea that avocados are grown commercially this far north (I personally associate avocados with San Diego Country). One particularly orchard had stunning panoramic views of the rolling hills and the Pacific Ocean in the distance.

Avocado orchard along the Ojai Freeway

The avocado trees were laden with fruit: 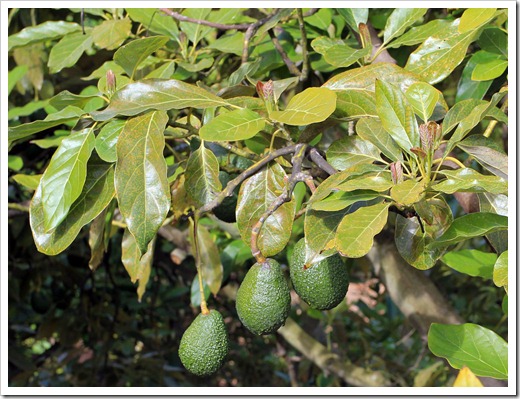 I couldn’t help myself and snatched one avocado from a branch overhanging the fence. It was completely green when I picked it, but it ripened perfectly in the two weeks that followed. We had it for lunch on Sunday and it was delicious: a perfect Hass avocado. 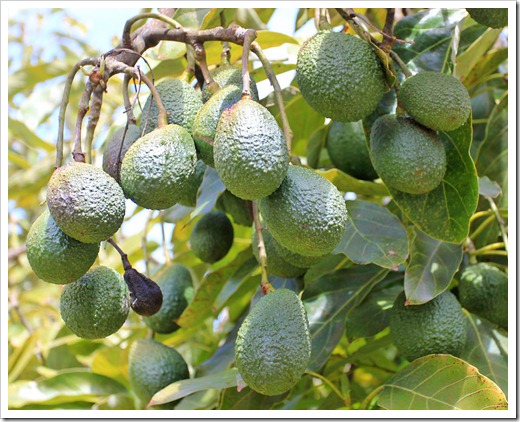 After what seemed like forever (a good hour, with several stops for photography along the way) we finally arrived in Ojai. Ojai is the only town of any size in this part of Ventura County—the last town, in fact, we would see for the next few hours. Even though it has less than 10,000 residents, Ojai is known all over California for its spiritual retreats and its focus on organic living. The main drag, Ojai Avenue, is picturesque in a laid back sort of way. Nobody seemed to be in a hurry, and the small coffee houses (no chain stores allowed in Ojai) were busy serving fair-trade coffee to healthy and fit looking individuals. It did seem a bit like the “Shangri-La of Southern California” it proclaims to be, albeit with an undeniable tinge of sleepiness. 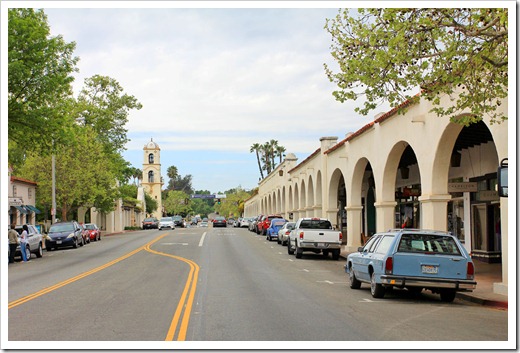 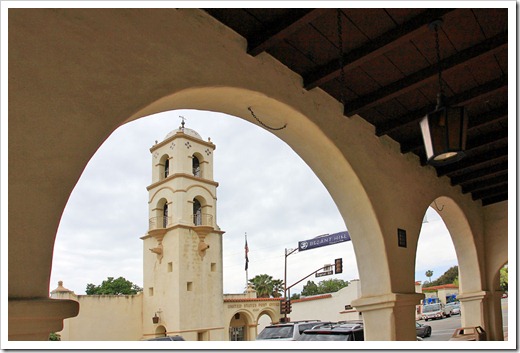 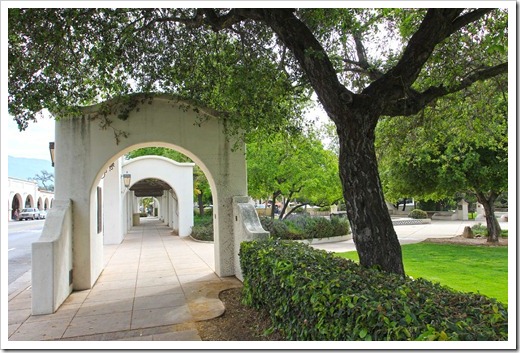 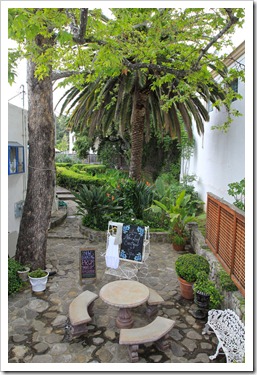 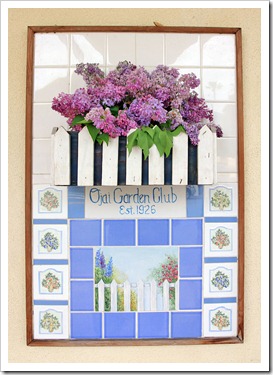 I did spot one nursery on the outskirts of town and while there wasn’t time to walk inside, I took a few snaps of a perfect specimen of Agave americana ‘Marginata’ and an old bathtub filled with colorful flowers. 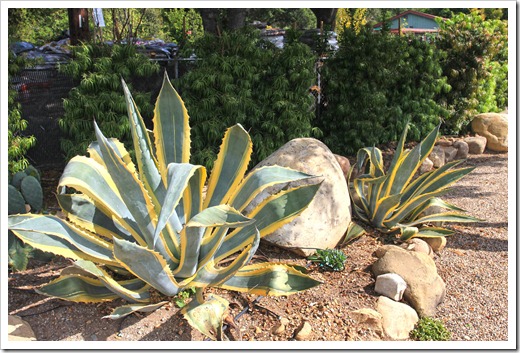 Agave americana ‘Marginata’ outside of an Ojai nursery 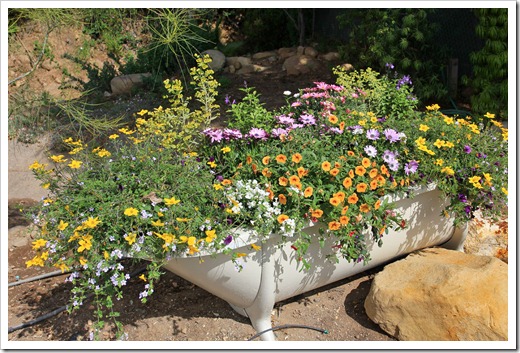 A few miles up SR 33, we spotted the “U.S.A.’s smallest post office” in Wheeler Springs, which wasn’t even a town, just a wide spot in the road. The post office, about the size of a drive-through coffee kiosk you might find in a mall parking lot, was closed, as was the restaurant next to it. 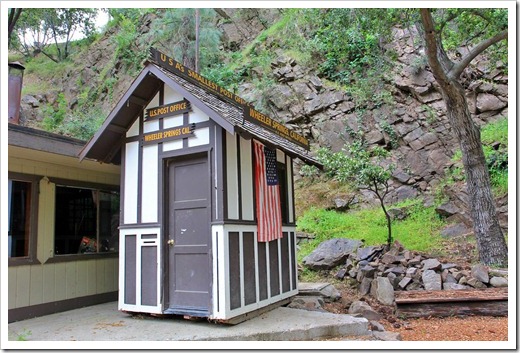 I wouldn’t even have mentioned Wheeler Springs hadn’t it been for the most beautiful specimens of Agave americana I’ve ever seen. Growing out of a narrow strip in a terraced retaining wall, several of them were suspended above ground as if defying gravity. The largest one had an almost perfect rosette. 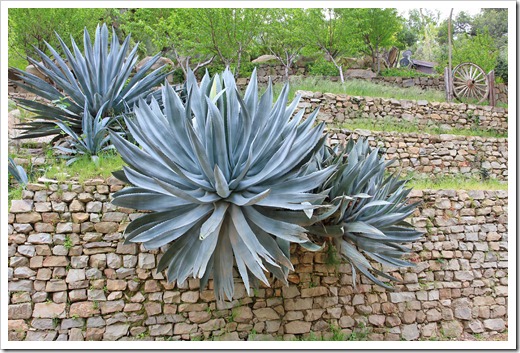 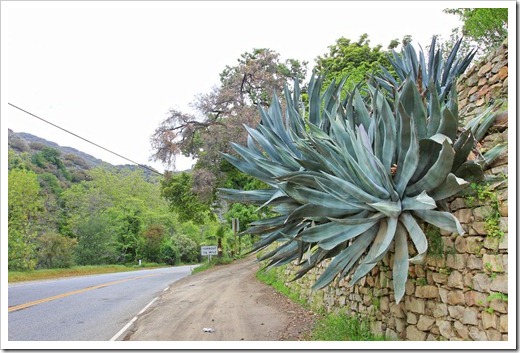 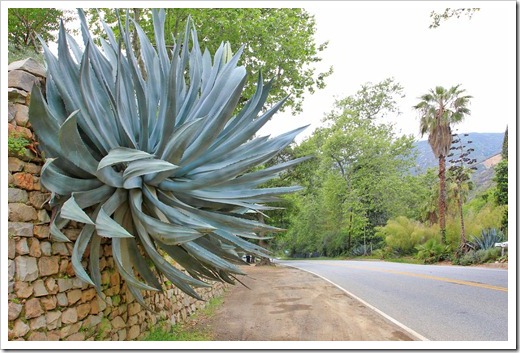 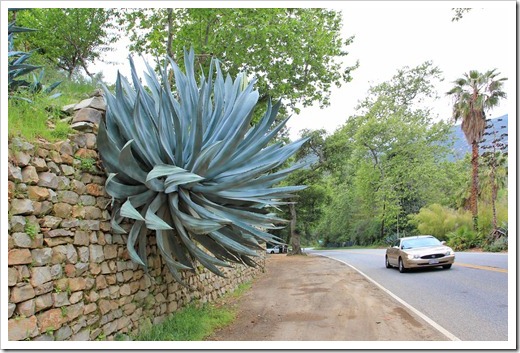 Agave americana, with a passing car for scale 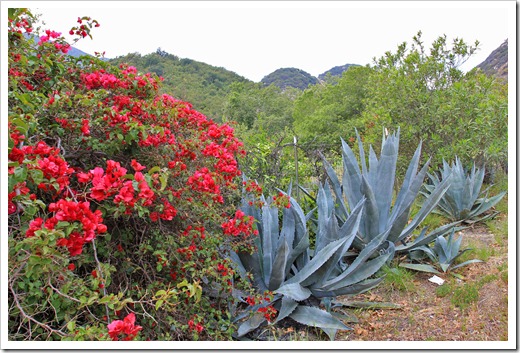 …and a flowering vine with very large, unusual-looking flowers. I didn’t know what it was but a reader identified it as cup of gold vine (Solandra maxima). 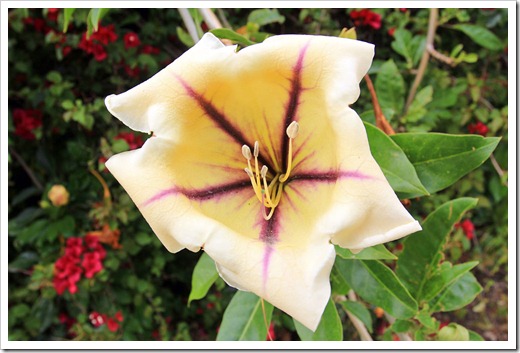 Solandra maxima (thank you for the ID, Flora!)

Another surprise was waiting a few miles north: a large clump of Mexican weeping bamboo (Otatea acuminata ‘Aztecorum’). I definitely did not expect to find bamboo in the middle of nowhere, let alone this species, which happens to be one of my favorite bamboos. 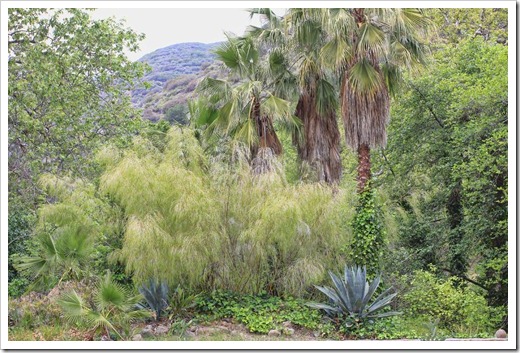 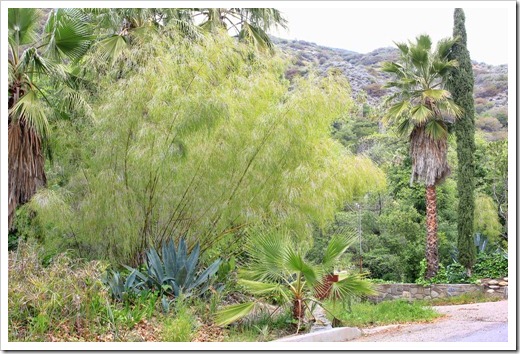 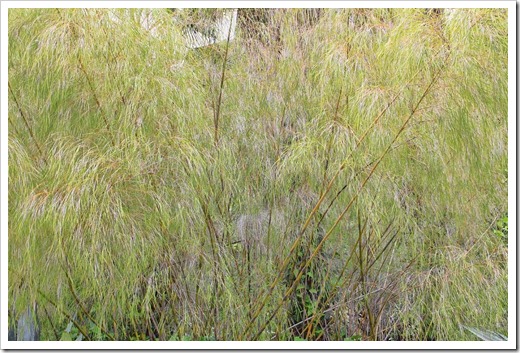 After an hour we crossed the Transverse Ranges, leaving behind the more forested area we had just traveled through and descending down into the Cuyama Valley. 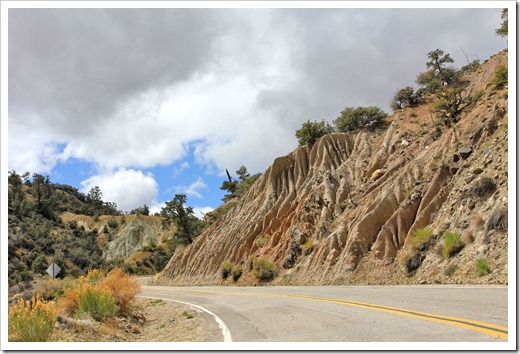 On our climb and descent over the Transverse Ranges, I spotted many Hesperoyucca whipplei. Like many agaves, they die after flowering, and their dried flower spikes are usually the first thing you see. 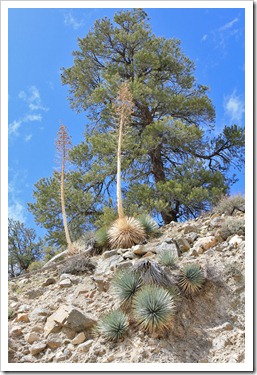 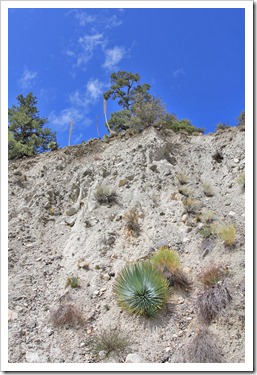 As you can see from these photos, Hesperoyucca whipplei typically clings to steep hillsides where water drains very quickly. 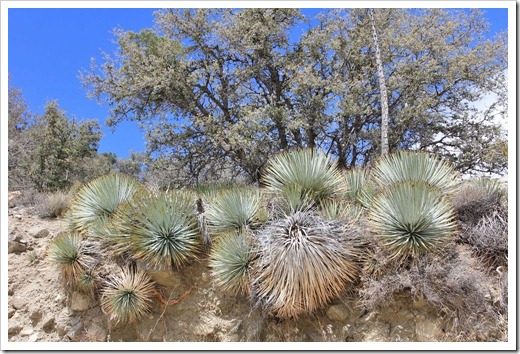 The soil here is extremely loose and doesn’t look like it would be able to retain water even for a day. 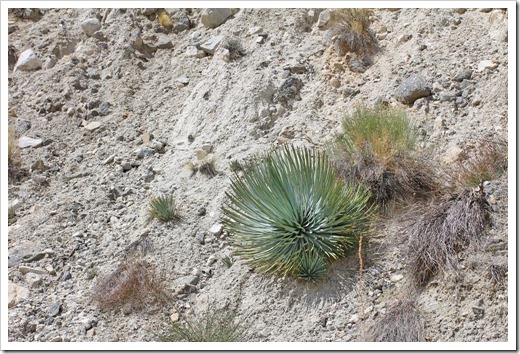 Looking at a few specimens up close, I was reminded why I love this yucca relative: Their pale turquoise leaves are truly stunning. 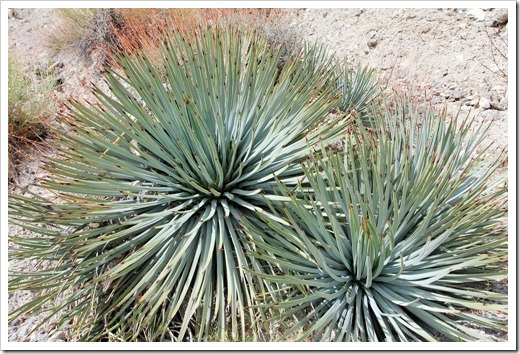 I don’t know why I haven’t added Hesperoyucca whipplei to my collection yet. 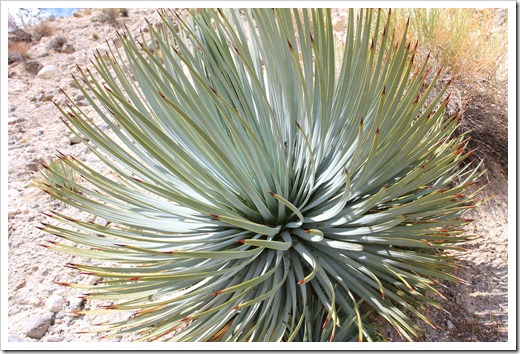 The rest of the our trip home was uneventful except for one last surprise outside the Central Valley town of Coalinga. Next to a field I spotted this sight which seemed completely out of place: 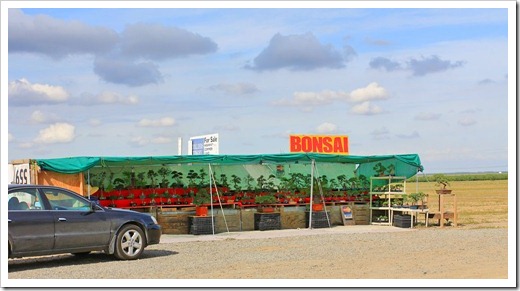 Bonsai stand outside of Coalinga

A makeshift bonsai stand next to gas station along a major Interstate freeway? Who would have thought.

Unfortunately, my fellow passengers threatened mutiny when I declared my intent to check it out so I will never know what I missed.