2011 has been a great year in the garden so far. My personal highlight was following the miraculous development of our tower of jewels (Echium wildpretii) as it turned from a modest but attractive rosette of leaves 1 ft. high and 2 ft. across into a 5 ft. tall conical structure covered with hundreds, if not thousands, of small flowers within a space of seven months.

Check out this post to see photos taken between October 2010 and May 2011.

After the bloom peaked in mid-May, the flowers quickly dried up and fell off. By the end of May, the tower was completely bare. 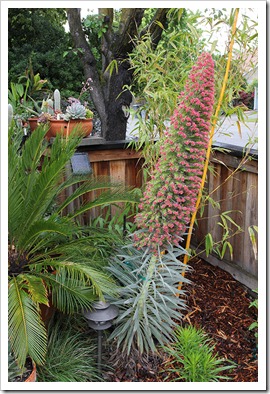 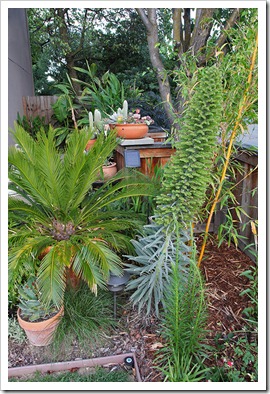 However, the work done by untold numbers of bees was not in vain.

Untold numbers of seeds, neatly arranged in pairs of two, have formed all over the tower.

What’s particularly interesting is that the seeds aren’t protected inside some sort of structure. Instead, they’re out in the open, exposed and seemingly vulnerable. But that must be the plant’s strategy for propagation. Maybe the exposed seeds are supposed to fall off as the plant sways in the wind? Or maybe they are supposed to be eaten by birds?

Eventually, the entire tower will fall over, scattering the seeds far and wide, but I wonder what will happen in the meantime? I’ll keep my eyes open—and my camera ready.

One thing is certain: There will be plenty of seeds to go around. If you’d like some, just let me know.