If you’ve followed my blog for any length of time, you will have gathered that I’m a big fan of ornamental grasses. One of my recent favorites is an oriental fountain grass cultivar named ‘Karley Rose’ (Pennisetum orientale 'Karley Rose'). It was discovered by David Skwiot of Sunny Border Nurseries and named for his daughter, Karley Rose. This grass is patented and therefore only available from licensed growers. Fortunately, many nurseries now carry it.

The regular oriental fountain grass (Pennisetum orientale) is an attractive, hardy grass that grows in just about any soil and is quite drought tolerant once established. Like most ornamental grasses, it needs close to full sun to flower well. In early summer it starts to produce flower spikes with whitish to pinkish blooms that radiate from the foliage in an elegant arch. Unlike other fountain grasses, such as Pennisetum setaceum and some cultivars of Pennisetum alopecuroides (especially the beautiful ‘Moudry’), Pennisetum orientale does not seem to self-seed much, if at all, and hence is not a garden bully.

‘Karley Rose’ is even better than the regular Pennisetum orientale. It has deeper green foliage, its flowers are larger and more purple, it blooms longer, and it’s supposedly even cold hardier. 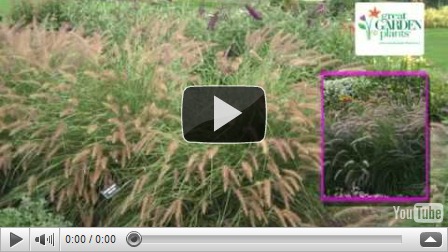 I put a couple of ‘Karley Roses’ in the ground last year and they’ve grown tremendously. Here’s a photo of our biggest clump:

Our neighbor across the street has four ‘Karley Roses’, and they look stunning backlit by the setting sun: