- May 24, 2018
One of my favorite gardens here in Davis is less than 10 minutes from my house. It belongs to my friend Marta Matvienko, a plant geneticist whose personal interests include rare and unusual fruits (at least rare and unusual for our area). Marta documents her growing experiences and fruit tasting impressions here.

But fruit trees aren't the only thing Marta and her husband Alex grow. In fact, the first thing you see approaching their house are the flower spikes of two blooming octopus agaves (Agave vilmoriniana). They are yellow beacons visible from a block away. I have no doubt they're extremely popular with bees and possibly hummingbirds.


Here are few more photos of these two agaves: 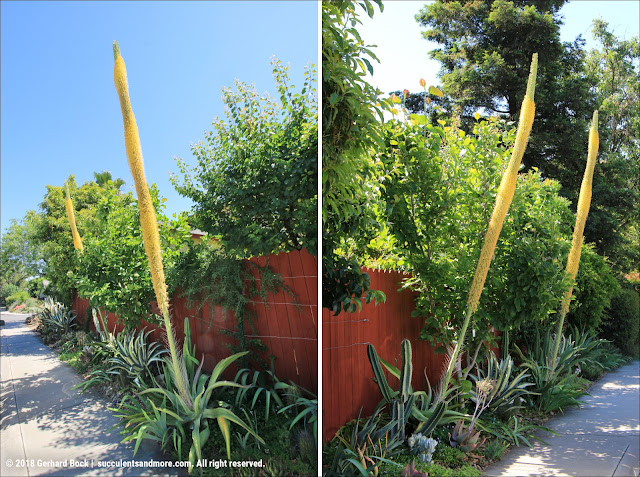 The bed along the sidewalk is also home to a bunch of Echinopsis, most of which either have buds... 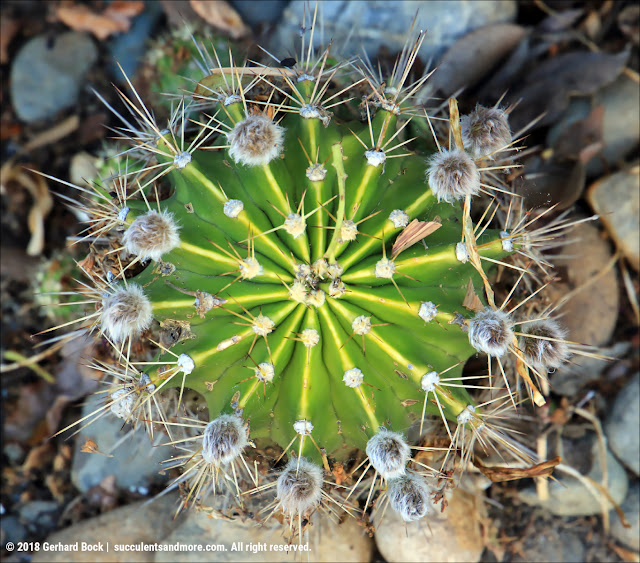 ...or are already blooming: 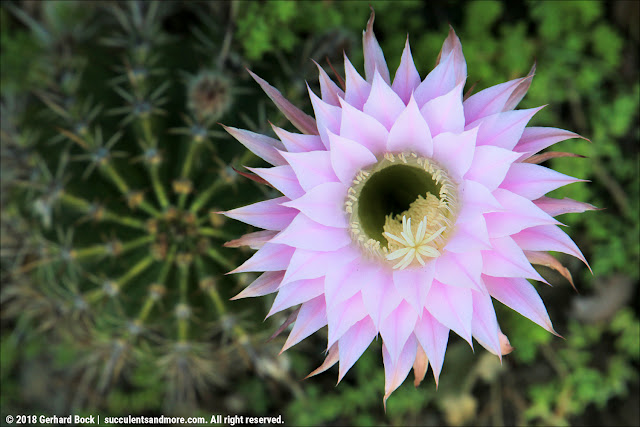 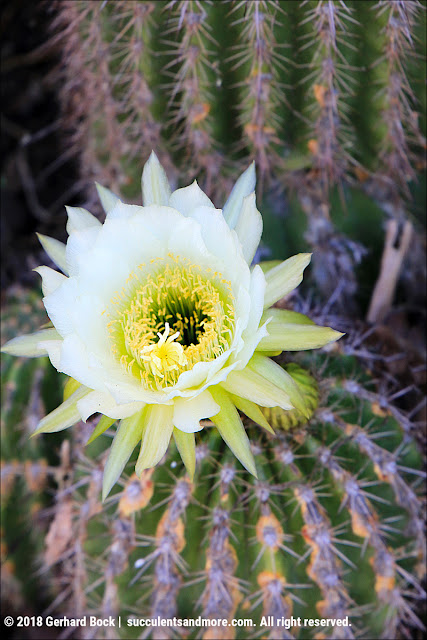 The flower power continues as you approach the front yard: 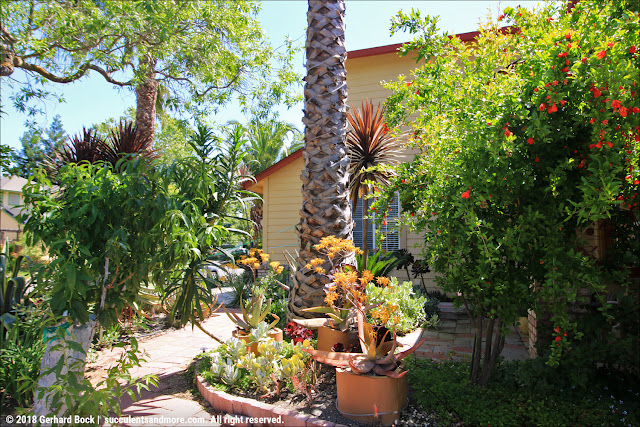 The flowers on this pomegranate tree are amazing: 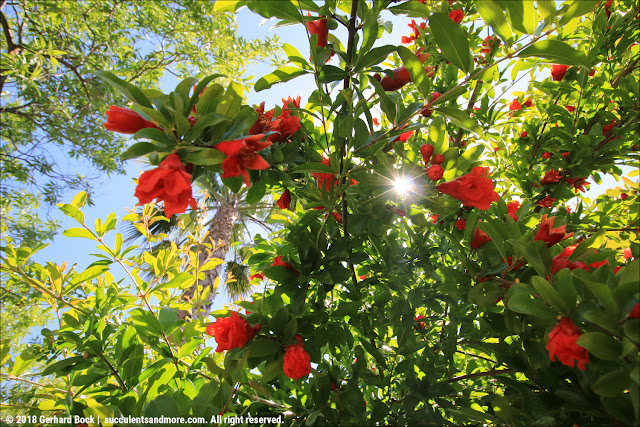 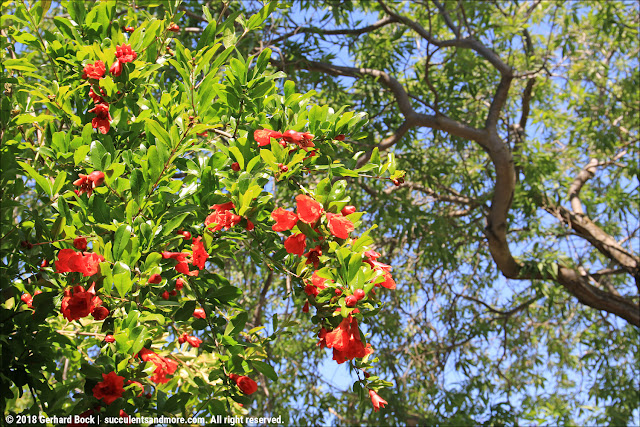 The large tree in the corner of the front yard is a × Chitalpa tashkentensis, an inter-generic hybrid between two US natives: the desert willow (Chilopsis linearis) and the southern catalpa (Catalpa bignonoides). This hybrid was created in the 1960s in Tashkent, Uzbekistan (then part of the Soviet Union) and introduced to the US in 1977. It's hardy at least to zone 7, possible zone 6. 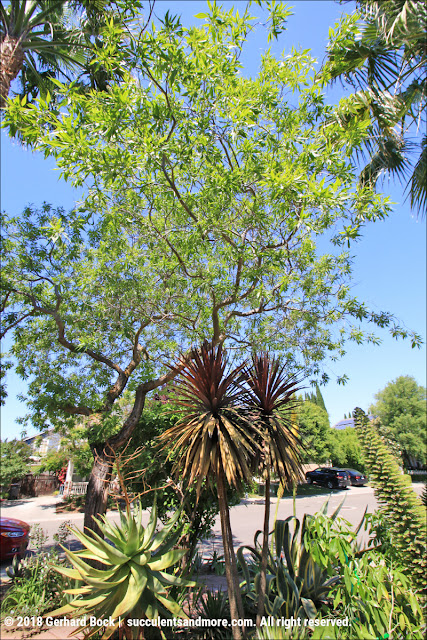 Marta's chitalpa is 15+ years old and mature. I recently bought a pink-flowering chitalpa cultivar called 'Pink Dawn' for my mother-in-law's place in the mountains. It's just a few feet tall, but it's already starting to bloom. 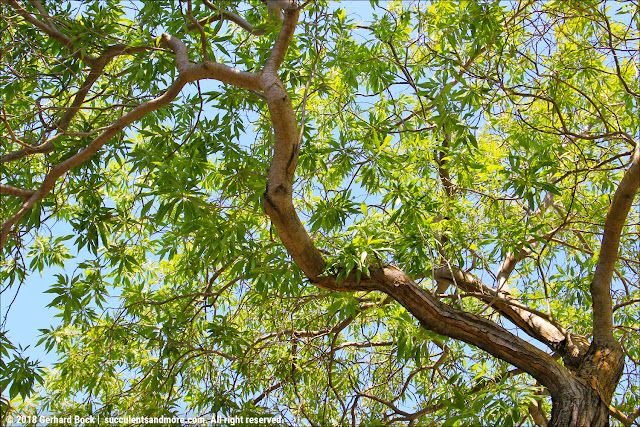 This is possibly my favorite view of the front yard: 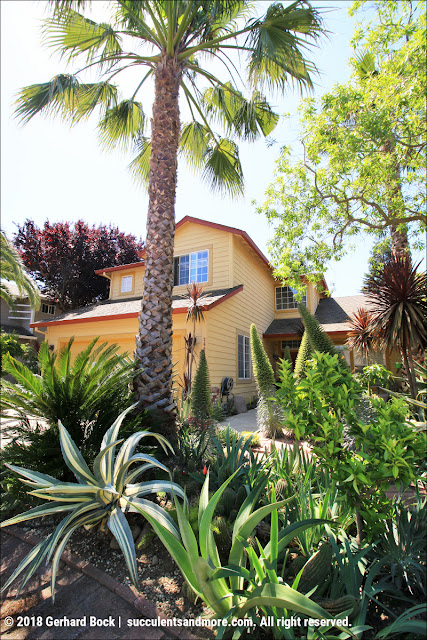 Yep, there are two more flowering Agave vilmoriana, making it a total of four. Agave vilmoriana produces bulbils on its flower stalk—literally hundreds of them, if not thousands. Marta will drown in them!

Look at these little buggers growing in the crack between two pavers. They're Agave bracteosa pups striking out on their own. 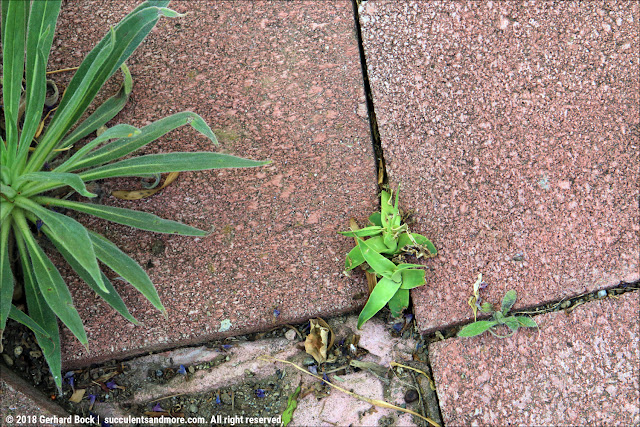 Tower of jewels (Echium wildpretii) is a plant you see all over town, always in a different place since they readily reseed. I count five of them in Marta's front yard, but there may have been more. They're done blooming, will set seed and then die, but the look great even now. 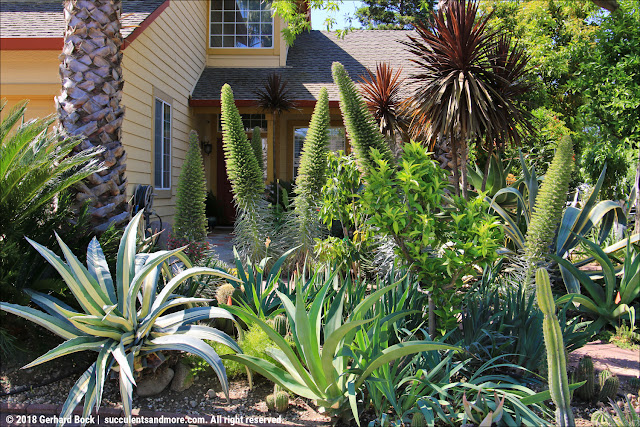 The Echium wildpretii are done blooming, but the towers are still impressive. Soon there'll be tens of thousands of seeds. 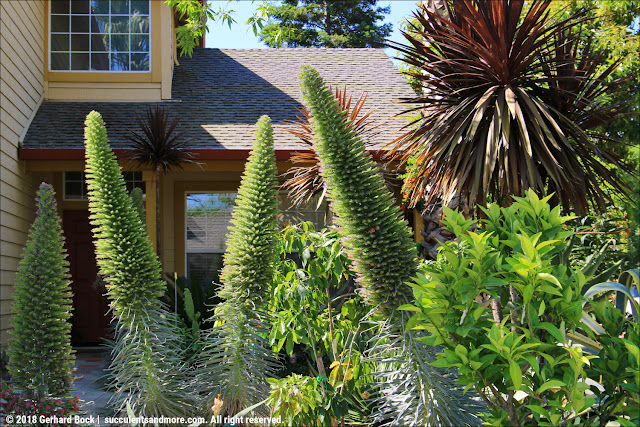 Now we're around back. Actually, in one of the side yards. While I have untold succulent offsets in small pots, Marta has just as many fruit tree seedlings: 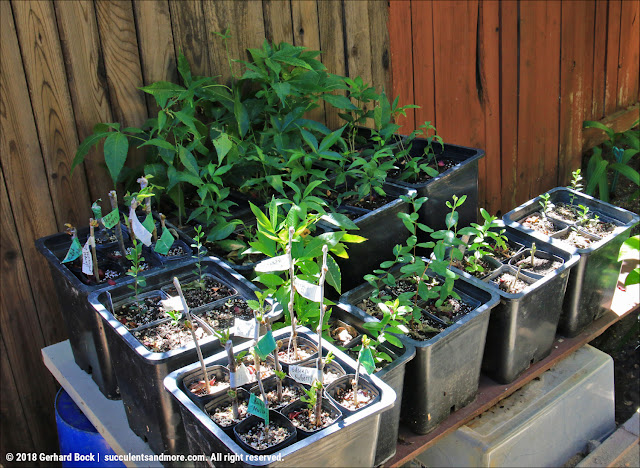 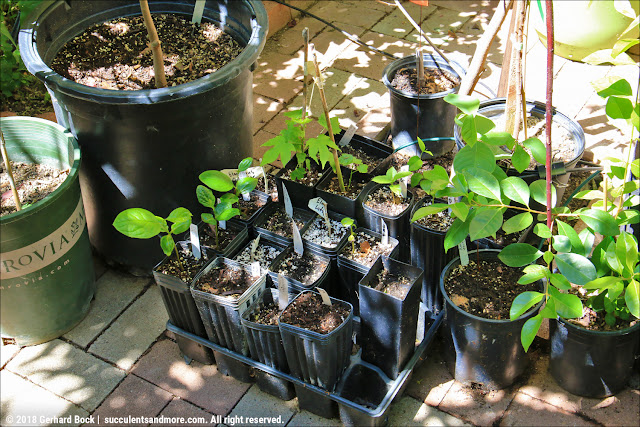 And some cactus babies for good measure: 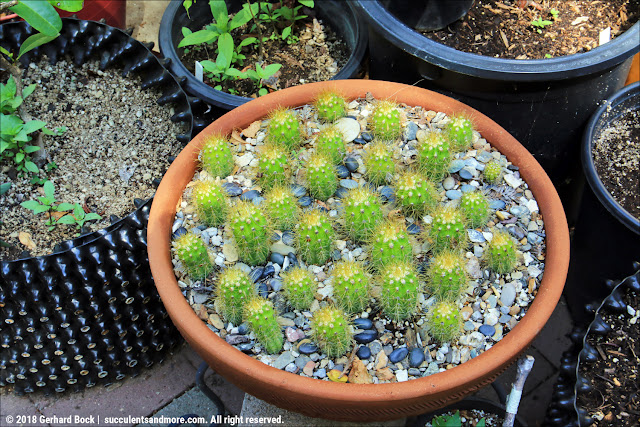 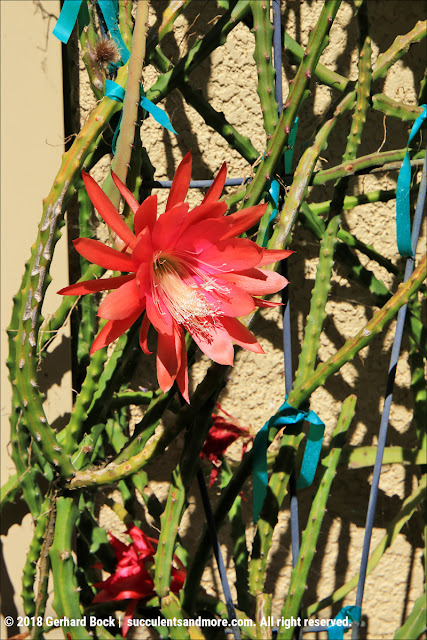 First view of the backyard. Notice the dragon fruit cactus (pitaya) on the right: 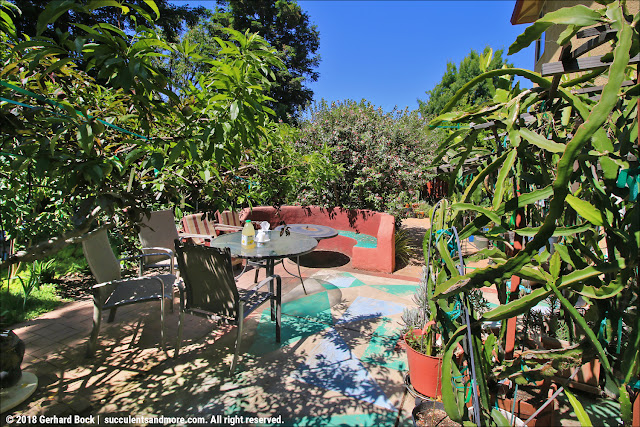 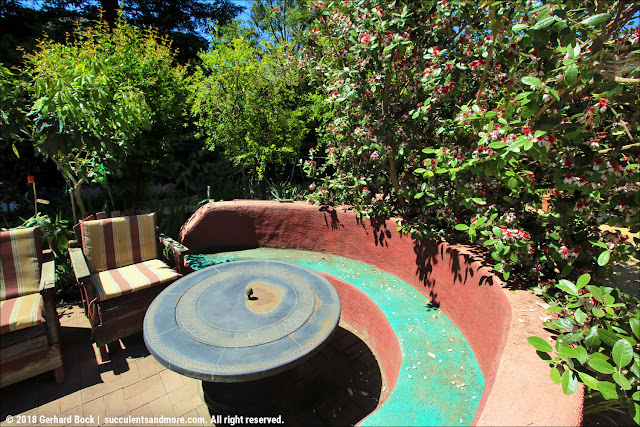 But what I like even more is this pineapple guava (Acca sellowiana aka Feijoa sellowiana): 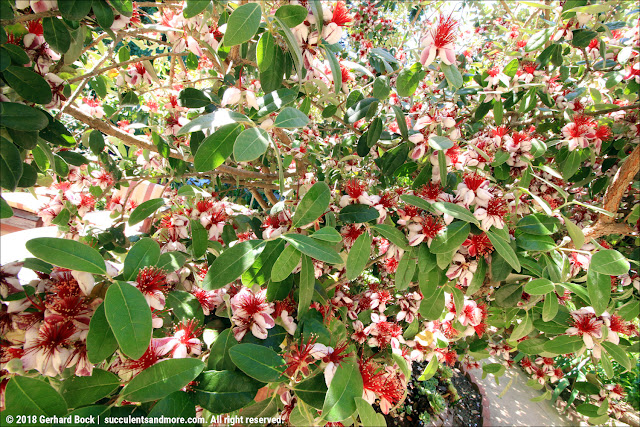 It's the most floriferous pineapple guava I've ever seen: 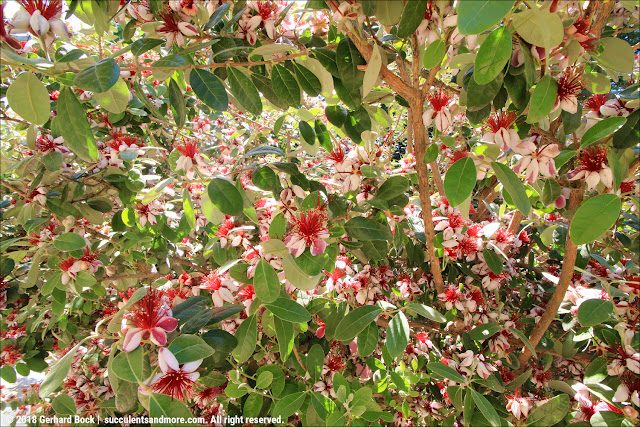 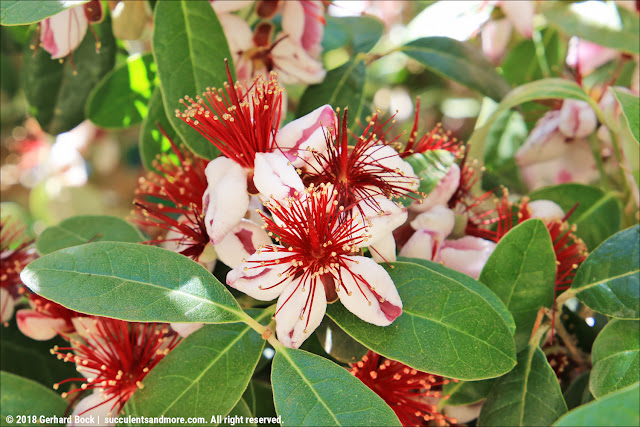 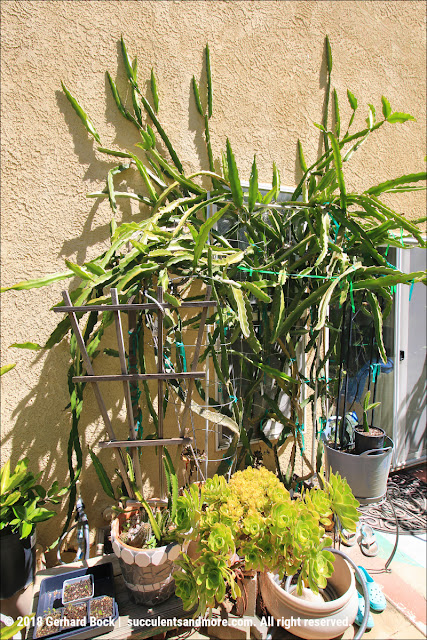 Succulently speaking, the far corner of the backyard is where the action is:


We'll finish our tour in the side yard on the street side—behind the wooden fence on the left are the two flowering Agave vilmoriana shown in the photo at the beginning of this post.


Many people, myself included, combine succulents with other plant groups, be it California natives or Mediterranean plants. But Marta is the only one I know who combines them so attractively with edible-fruit plants!