- May 01, 2018
In early March I wrote about a mysterious case of rot that had affected three of my agaves: Agave ovatifolia 'Frosty Blue', Agave 'Snow Glow', and Agave parrasana.

Agave parrasana is healing. The rot has stopped, and there's every reason to believe this specimen will pull through.

Agave 'Snow Glow' succumbed within a week of my original post and is nothing but a memory now.

Agave ovatifolia 'Frosty Blue' was one of my favorites and I was determined to put up a fight. I sprayed it multiple times with a fungicide (Daconil), keeping my fingers crossed that would do the trick. However, 'Frosty Blue' simply couldn't be saved; the rot had progressed too far. To this day, I don't know what had caused this outbreak. 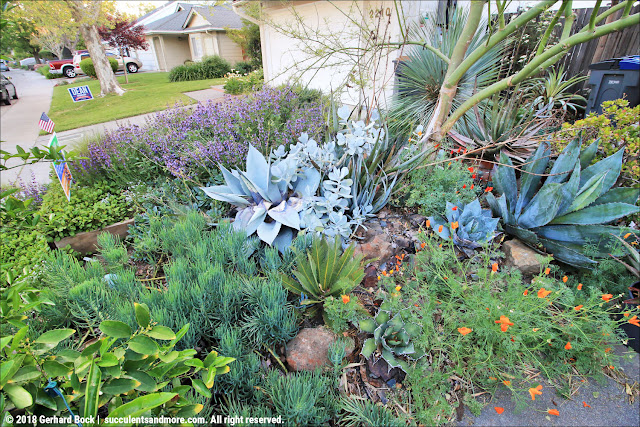 These close-ups show how deep the rot had gone: 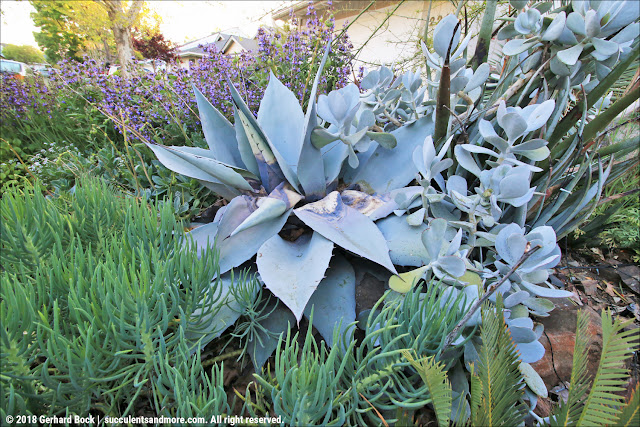 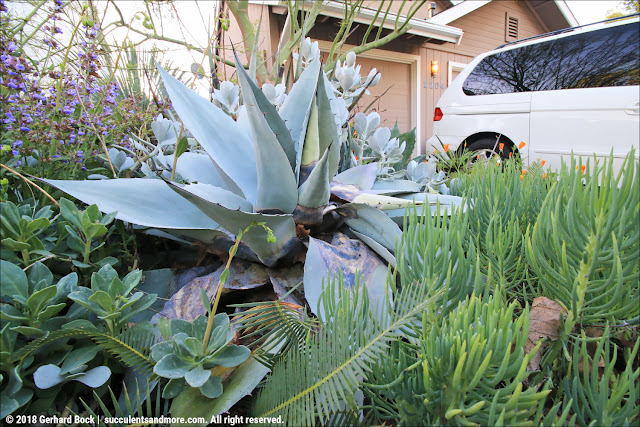 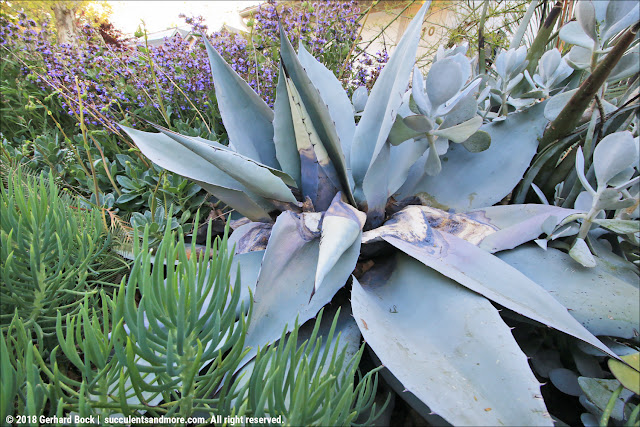 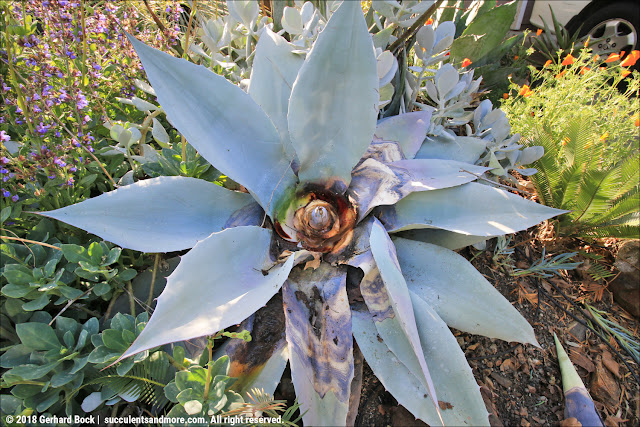 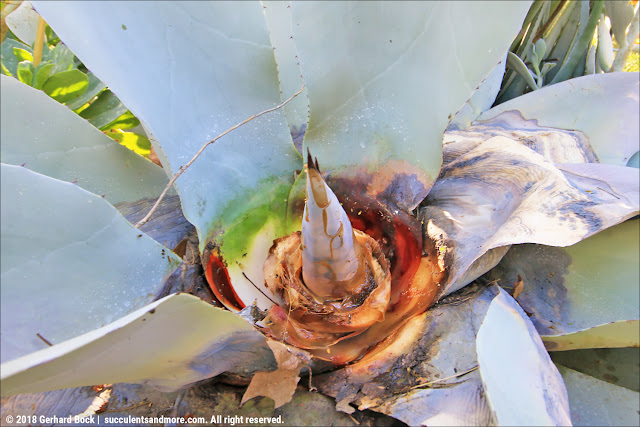 When I pulled on the leaves with the most rot, they came right out—as did the center: 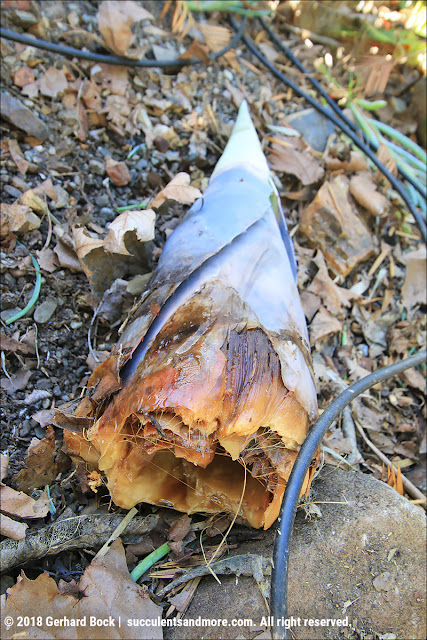 In fact, every single leaf pulled out as easily as a hot knife slices through butter.

After I had taken off all the leaves, a few minutes of digging with a spade was all it took to remove the roots. The result was a green waste bin full of foul-smelling plant matter and an empty spot where 'Frosty Blue' had been: 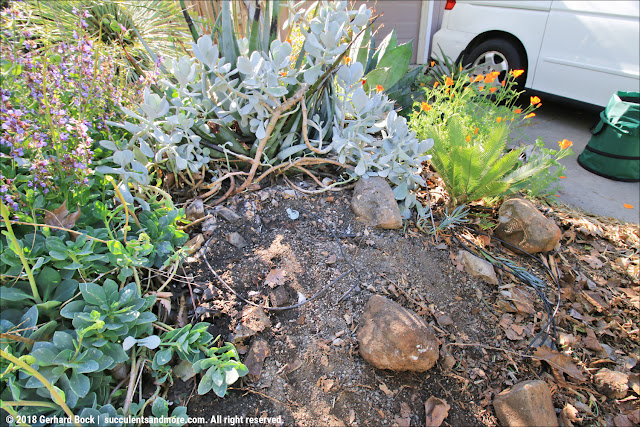 I drenched the soil several times: first with Daconil (chlorothalonil) and then with a product called Serenade which, according to its manufacturer, "is made from a unique, patented strain (QST 713) of Bacillus subtilis. Bacillus subtilis strain QST 713 penetrates and destroys the disease pathogen, but does not harm beneficial insects or wildlife when used according to label directions."

Whether this approach was successful remains to be seen, but I'm hopeful.

A week after treating the soil, I replanted the area. This is what it looks like now: 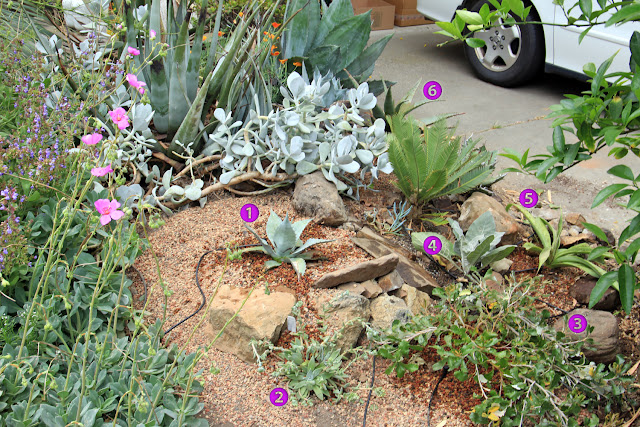 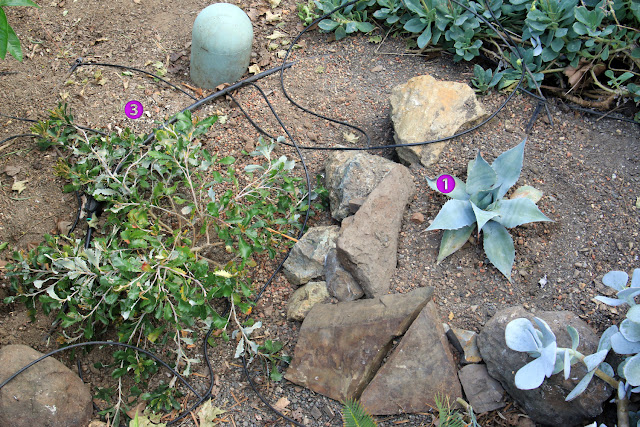 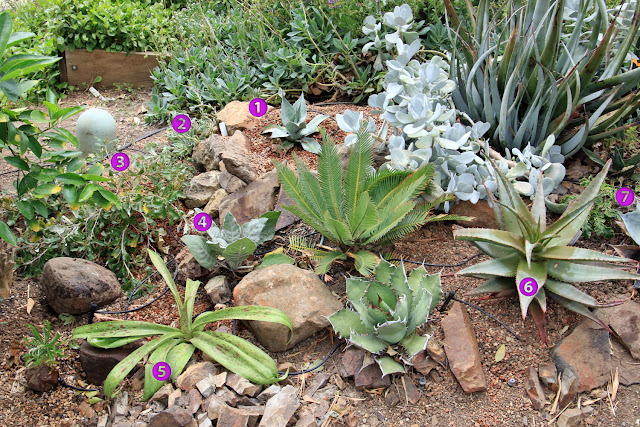 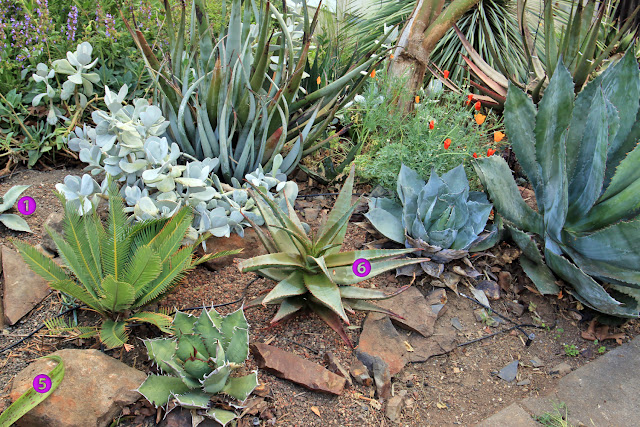 Agave 'Desert Love' is special and I do want it to thrive here. It does have that ovatifolia look, both in terms of leaf shape and color, but the parrasana genes should result in a smaller plant overall than straight ovatifolia.

Dudleya farinosa was on hand and needed a home so I planted it below Agave 'Desert Love'. I have a mixed track record with dudleyas so I give it a 50:50 chance of long-term survival.

My Banksia media is the prostrate form and it looks like it'll only be a foot, or maybe two, in height. It can spread out all it wants under and next to the Bearss lime tree. If its branches encroach on any of the succulents, I'll simply prune them.

Verbascum bombyciferum is a biennial; it will flower either this year or next and then be gone.

×Mangave 'Rio Verde' adds contrasting leaf texture and color and will end up in the 2-3 ft. range.

I bought Aloe ortholopha on my trip to San Diego a month ago. I'm hoping that given a bit more shade than it had at Evergreen Nursery the new leaves will be more blue. This is the look I'm after. The photo also shows its unique horizontal flowers; as far as I know, only Aloe ortholopha and Aloe marlothii have flowers that grow this way.

Scabiosa 'Vivid Imagination' is a pincushion flower with variegated leaves that may or may not do well in this spot. Either way is fine with me.

In case you were wondering, the cycad in the photos is Dioon edule (Palma Sola form). There's another one behind the 'Desert Museum' palo verde; you can't see it in these images.

So there you have it, another bed redone even though it hadn't been part of the master plan for 2018.

© Gerhard Bock, 2018. No part of the materials available through www.succulentsandmore.com may be copied, photocopied, reproduced, translated or reduced to any electronic medium or machine-readable form, in whole or in part, without prior written consent of Gerhard Bock. Any other reproduction in any form without the permission of Gerhard Bock is prohibited. All materials contained on this site are protected by  United States and international copyright law and may not be reproduced, distributed, transmitted, displayed, published or broadcast without the prior written permission of Gerhard Bock. If you are reading this post on a website other than www.succulentsandmore.com, please be advised that that site is using my content without my permission. Any unauthorized use will be reported.
agaves disease rot
Location: Davis, Kalifornien, USA