- May 15, 2018
In part 1 of this alphabetical round-up of garden highlights from the 2018 Garden Bloggers Fling I went from Agaves to Lush. This installment covers the rest: Mexico to Zilker Botanical Gardens.

Texas was part of Mexico until the Texas Revolution of 1836. The relationship between Texas and Mexico has always been turbulent, and in a February 2018 CBS 11/Dixie Strategies poll 57% of Texans supported Trump's border wall. But in spite of the current political animosity towards Mexico, Texas's neighbor to the south continues to be a major cultural influence: 31% of the total population of Texas is of Mexican descent and 30% of households speak Spanish at home (source). Mexican food—and Tex-Mex, a fusion between Mexican and American cuisine—are insanely popular, and even hard-core conservatives would change their tune if Trump slapped a tariff on the import of tequila.

Food writer Lucinda Hutson's garden, our first stop on Sunday, distills the essence of Mexico into a small urban space in central Austin. Walking through the backyard gate into her Jardín Encantador is like stepping into a courtyard garden in the heart of Mexico. It's Lucinda's love song to Mexico, and I can still hear it loud and clear. 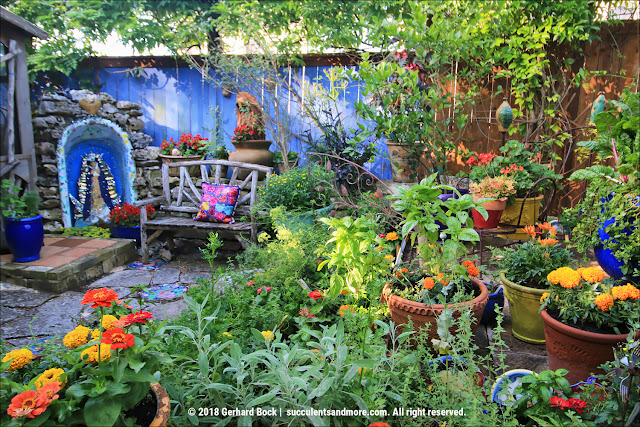 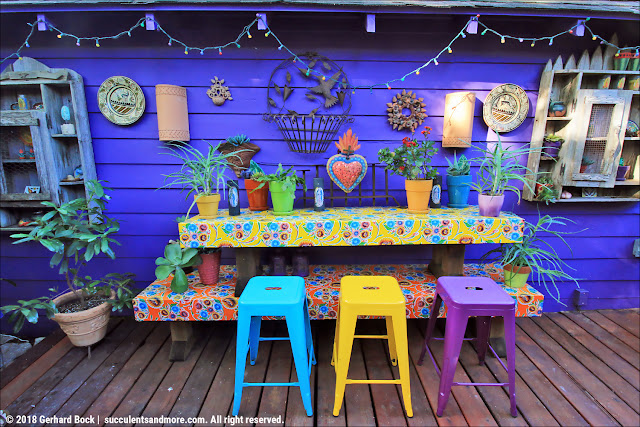 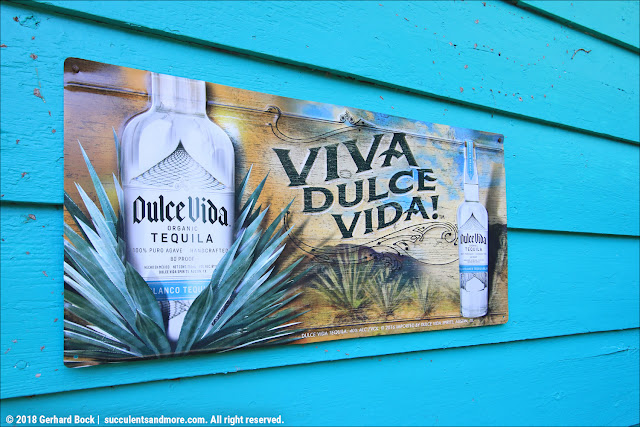 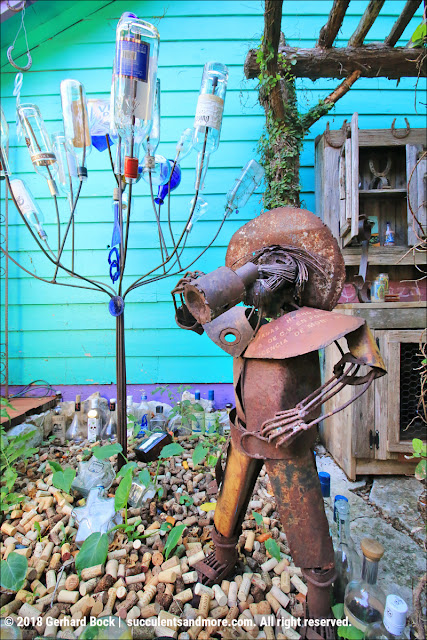 While the main focus of the Garden Bloggers Fling is on gardens—private and public—the itinerary always seems to include a nursery or two. Local nurseries are often Fling sponsors, and they make great venues for events like lunch presentations and opening or closing receptions. The 2018 Fling stopped at two nurseries: The Natural Gardener, the iconic organic nursery started by Austin gardening legend John Dromgoole in 1993, where we had lunch on Friday (May 4); and Articulture, a design boutique/nursery and event space where we had our closing reception on Sunday (May 6). The day after the Fling, Monday, a handful of bloggers and I also dropped by East Austin Succulents, Austin's premier succulent nursery (yes, I was in heaven).

Quite a few things surprised me about Austin, not the least of which were the huge number of trees that shade the city. From what I saw riding on the bus all over suburban Austin, every effort is made to save existing trees when building new houses. As a result, even newer homes are often surrounded my mature trees, many of which are oaks. More than 50 oak varieties are native to Texas; post oak, bur oak, red oak, and live oak seem to be the most common species in residential areas. Beyond practical aspects such as shading, oak trees lend beauty and a sense of tranquility. 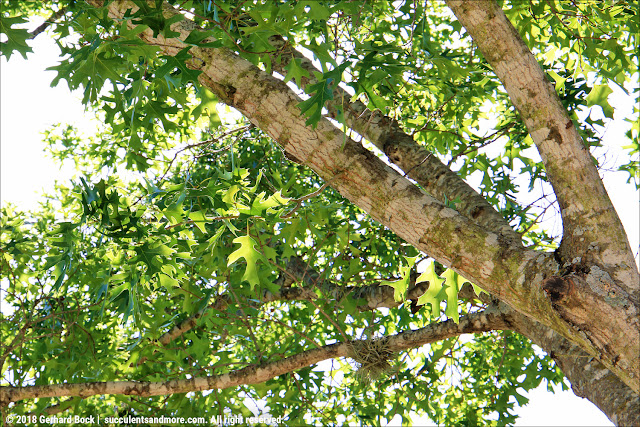 Austin is hot in more ways than one, figuratively and literally. A swimming pool makes the heat and mugginess of the summer more bearable. Almost every garden we visited had one. While a pool takes away room that could be used for plants, it does add an element of coolness that is so essential in hot climates.

In Mexican and other Hispanic cultures, the quinceañera is an important coming-of-age celebration on a girl's 15th birthday. It marks her passage from girlhood to womanhood. Girls typically wear an elaborate dress, and the formal ceremony has a number of elements that follow a specific sequence (the girl enters accompanied by her father; the father dances a waltz with the girl and then passes her on to friends and relatives, etc.).  At Zilker Botanical Gardens I came across the girl in the photo below who was having her formal portrait taken in the Japanese garden. The color of her dress was a perfect complement for the flowers on the pomegranate tree behind her. 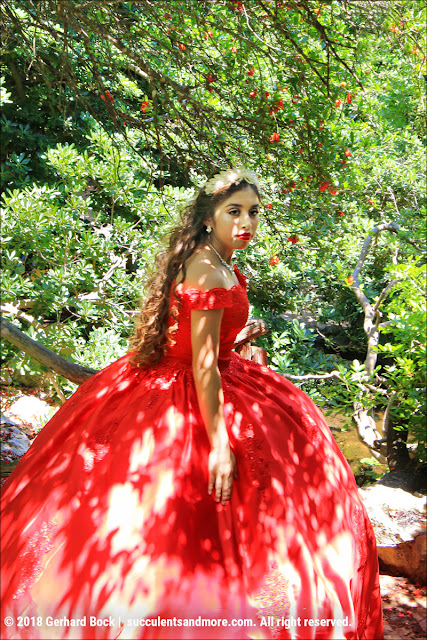 When I want rocks for our garden, I have to haul them home from somewhere else, or buy them. Gardeners in Austin don't have that problem. There's rock everywhere; all you have to do is dig. As a result, we saw an incredible variety of stonework, ranging from stepping-stone paths and retaining walls to rock facing for houses (or maybe they're built of solid rock?). Hill Country limestone is available in abundance.

Next to stone (see Rocks above), my favorite material is steel. I'm a sucker for Corten weathering steel in the garden. My heart began to race when I saw the massive curved retaining wall at the entrance to the Mirador garden. In fact, Corten is used extensively throughout the garden. Even the swimming pool is rimmed with Corten! Look for a detailed post soon.

I'm not talking about air plants sold in nurseries or home decor stores. I'm talking about a Texas native that grows on trees, mostly oaks. We're all familiar with Spanish moss draping from trees in the South; people are often surprised to learn that Spanish moss is actually a tillandsia (Tillandsia usneoides) and hence a member of the bromeliad family. Think of it as a weird cousin of the pineapple that has migrated from the ground into the trees. Texas has its own version: ball moss (Tillandsia recurvata). Look closely at the first photo below: The clumps that look like bird's nests are ball moss. Walk around any tree that is home to ball moss and you'll find some on the ground, blown off by strong winds. Ball moss is not the prettiest tillandsia, but I brought some home as a souvenir. 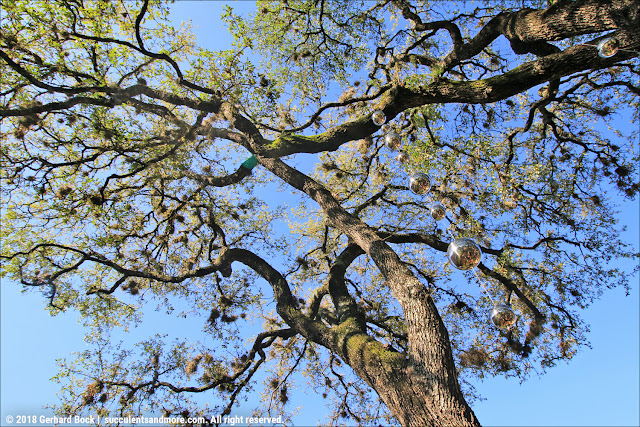 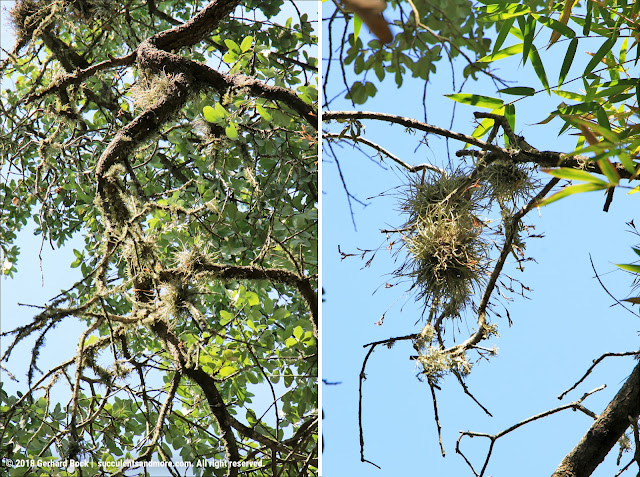 No, I'm not talking about vampires or zombies although I'm sure there are a few skulking about somewhere in Austin (after all, Austin is weird). What I'm talking about are cycads like sago palms (Cycas revoluta). Many of them were knocked to within an inch of their lives this past winter. But these plants are tough. A month ago many of them might have looked dead, but now they're making a comeback. Never give up on a plant! 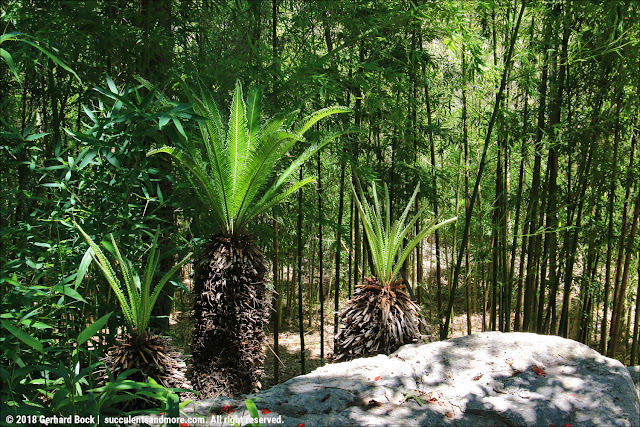 This requires no explanation. Where there are elevation changes, there are views. Central Austin is quite flat, but many suburbs are hilly. This makes for some pretty amazing vistas.

Predictably, there were plenty of wildflowers at the Lady Bird Johnson Wildflower Center. I managed to get a few photos before the sky opened up and a massive gullywasher forced us to seek shelter.

What I didn't expect was seeing so many wildflowers by the roadside. I wasn't able to take any photos from the bus, but even along urban freeways I spotted strips of yellow and orange.

Austin may have an average annual rainfall of 35"—almost twice of what we typically get in the Sacramento area—, but there can be significant dry spells as well. In fact, this year much of Texas with the exception of the eastern third has seen less precipitation that normal, with conditions ranging from abnormally dry to extreme drought. This is why many gardens rely on water-wise plants and harvest rainwater. I saw more rainwater tanks in Austin than I ever have here; not just 50-gallon plastic drums but bad-ass storage tanks holding thousands of gallons. California needs to follow suit!

About ⅓ of all 50 or so Yucca species are native to Texas. Probably the best-known and most photogenic is the beaked yucca, Yucca rostrata. It's endemic to western Texas and parts of northern Mexico but it does exceedingly well in Austin. In fact, I've never seen so many Yucca rostrata growing in public and private landscaping.

Located not far from downtown Austin, 31-acre Zilker Botanical Gardens was our lunch venue on Sunday, May 6. Zilker executives shared their ambitious plans for the future that will include significant upgrades to the gardens. For me, the main attraction was the Cactus and Succulent Garden. Right now it's tiny—even my front yard is bigger—but with Jeff Pavlat, vice president of the Cactus & Succulent Society of America as Interim Executive Director, I imagine it will see a major expansion in the years to come. 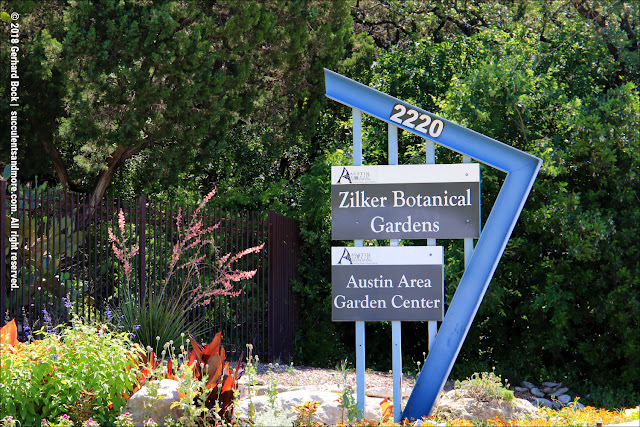 © Gerhard Bock, 2018. No part of the materials available through www.succulentsandmore.com may be copied, photocopied, reproduced, translated or reduced to any electronic medium or machine-readable form, in whole or in part, without prior written consent of Gerhard Bock. Any other reproduction in any form without the permission of Gerhard Bock is prohibited. All materials contained on this site are protected by  United States and international copyright law and may not be reproduced, distributed, transmitted, displayed, published or broadcast without the prior written permission of Gerhard Bock. If you are reading this post on a website other than www.succulentsandmore.com, please be advised that that site is using my content without my permission. Any unauthorized use will be reported.
#gbfling2018 Austin garden art Garden Bloggers Fling garden tour nurseries private gardens Texas travel
Location: Austin, Texas, USA