Desert Gardens of Steve Martino: a must-read for xeric gardeners

- May 31, 2018
There was a time when I didn't know Steve Martino's name, but his signature aesthetic—vibrantly colored walls, sculptural desert plants, dramatic interplay of light and shadow—is something I've been familiar for as long as I can remember.

Previously, the only way you could see Steve Martino's work was in magazine articles. His website has great photos, but there are never enough for my taste. And with the majority of his projects being private residences, primarily in the Southwest, it's virtually impossible to visit them in person.

That's why I was so excited when a couple of years ago Steve Martino mentioned on his Facebook page that a book was in the works. That book is now here: Desert Gardens of Steve Martino, written by Caren Yglesias and photographed by Steve Gunther, published in April 2018 by Monacelli Press. 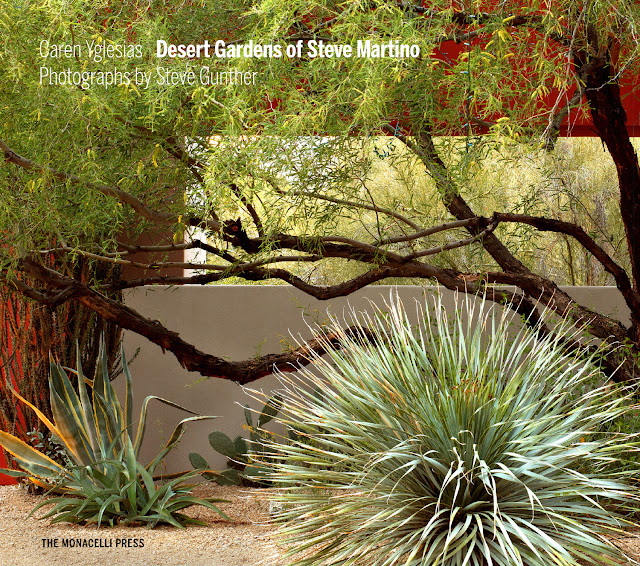 By way of introduction, I'd like to give you some excerpts from a lecture Steve Martino gave in 2012 at Oxford University:


I am a landscape architect by title but I consider myself a garden designer. I’ve never had much interest in putting plants around buildings.

I am more interested in creating outdoor living spaces that make a connection between architecture and nature.

I think of garden design as an art form; it’s my art. I like to solve problems and to create interesting places that my clients love to be in and that are grounded to the natural processes of the site and region.

In the west landscapes are like terminally ill patients. They are tethered to IVs and monitors and need constant attention to keep them alive. If someone pulls the plug, the garden will die.

The only way I know of to break out this situation is to use native plants. They have less of a demand for water and fertilizer, which is much better spent on food crops. In the west, water guzzling lawns are the biggest culprit, along with air pollution caused by their continuous maintenance requirements.

My intern, Lora, was explaining the 3 tenants of sustainability to me: environmental, social and economic. I told her my definition of sustainability has always been very simple: when the power or water is shut off your garden should not die.

I highly recommend you read the entire text of Martino's lecture. It provides valuable insight into who Steve Martino is as a professional, and how he approaches his work. This, in turn, will give you a fuller understanding of the 21 projects showcased in The Desert Gardens of Steve Martino.


The book itself does a great job introducing readers to the world of Steve Martino. The preface by Caren Yglesias, the book's main author, and the foreword by architect Obie G. Bowman touch on the essential components of Martino's work: his focus on native plants, "obsessive search to provide visual and acoustic privacy," efforts to "design and live in recognition of place [and] in harmony with an active and healthy ecology."


In his essay titled "Weeds and Walls: Epiphanies and Lessons Learned," Steve Martino talks about his own life, experiencing the desert up close while living on a ranch during his teen years, and studying landscape architecture at Arizona State University. In 1970, he dropped out of architecture school in his third year because of an accident and went to work doing site design for a Phoenix architecture firm.


He began to question the focus on plants that need a constant supply of water and fertilizer when plants native to the Sonoran Desert need virtually nothing. However, since they were generally considered "weeds," they were hard to find in nurseries. One pivotal moment came when Martino met Ron Gass who had a small native plant nursery. This was a unique opportunity for Martino to learn from a "walking encyclopedia of knowledge." The two of them went on seed collecting expeditions, and for a while Martino even worked at Gass's nursery as a laborer.

After Martino had started his own landscape architecture business, Gass would grow plants from seeds Martino brought him, and Martino would trial the plants in various projects. And as Martino began to achieve professional success, so did Ron Gass: his business, Mountain States Wholesale Nursery, would become the leading supplier of desert plants in the country. Quite a few plants in my own garden are from Mountain States, including the Hesperaloe 'Sandia Dawn' I brought back from Austin, TX recently.


In the book, Steve Martino calls himself an "accidental landscape architect:"


It never occurred to me to become a landscape architect; I just wanted to use desert plants in my projects, which became the idea to bring the desert into the city. This idea was met with resistance at every step of the way probably because so much effort was being spent on removing the desert.

Martino remembers the landscape style known as "desert landscaping" in the 1970s:


It was pretty much despised by everyone. It was basically gravel, sometimes painted green, with a few cacti or rusty wagon wheels proudly placed around the property. I called these "gardens of despair."

As a political statement, he called his own work "desert landscaping," too:


I wanted my projects to say something about where we live by celebrating the desert rather than make apologies for it.

Initially, Martino's work was met with a great deal of hesitation and skepticism:


All my projects needed to be demonstration projects for my future clients, the profession, and the public.


The first half of my career was a struggle to get clients to use desert plants, which were viewed as weeds.

But eventually the tide began to turn:


Once I started to receive ASLA design awards it seems to legitimize my work and give me national exposure.

And now, after 40 years in the business:


Clients [...] come to me with high expectations of what I can do for them. The discussion of sustainability and appropriateness of native plants doesn't even need to come up. This is 180 degrees from where I started.


The bulk of the book (200+ pages) showcases 21 gardens designed by Steve Martino. I was very happy to see that this includes his own garden in Phoenix where he experiments with design ideas and plants. (You need to get the book to find out more!)

For each garden, Caren Yglesias gives an insightful overview outlining the site, its specific challenges and requirements, and the homeowner's brief to Martino. A site plan shows the arrangement of the house and the landscaping elements. Steve Gunther's stunning photographs—the result of countless hours of waiting for the best light—bring the gardens to life. Even if you knew nothing about Steve Martino's design philosophy, you would thoroughly enjoy the book purely on a visual level.

The 21 garden portraits illustrate all the essential elements of a Steve Martino design, above all privacy. "I'm a fanatic about creating privacy," Martino says. "Not only do I not want to see the neighbors, I don't want to see their houses and I don't want them seeing me." This often requires unconventional approaches, including freestanding walls, or walls camouflaged as sheds to meet city regulations.

Virtually every project in the book includes at least one colored stucco wall. Martino pioneered what would become his signature element in a 1983 project for Arid Zone Trees, a wholesale tree grower in Mesa, AZ. The inspiration came from the work of Mexican architect Luis Barragán (1902-1988), a major influence on generations of architects around the world.


Martino's other trademark elements include the use of steel and translucent panels, cantilevered shade structures and stairs, outdoor fireplaces, as well as simple but refined water features.


"Like all designers," Martino says, "I want to make outdoor spaces that people want to be in; I try to do it in a simple straightforward fashion. I want the garden to say something about the site and the region." The photos in this book are vivid proof that Martino succeeds on every level.


Desert Gardens of Steve Martino (The Monacelli Press, 2018) is available now, either directly from the publisher, your local bookstore, or the usual online sources. I would rate it a must-have book for anybody captivated by desert landscaping, and it will also appeal to people interested in contemporary garden design in general.

I, for one, know that it will be one of the most-thumbed books in my bookcase. I'm glad it's printed on coated paper that should be fairly resistant to the drool I'll continue to produce as I look at Steve Gunther's aspirational photos. My job now is to figure out a way to introduce Steve Martino style elements into my own garden.

Steve Martino's blog, Weeds and Walls, hasn't been updated in a long while, but it contains a wealth of insight into his thought process. You'll also see his own photos from projects and travels. I find it fascinating to see what catches Martino's eye.

© Gerhard Bock, 2018. No part of the materials available through www.succulentsandmore.com may be copied, photocopied, reproduced, translated or reduced to any electronic medium or machine-readable form, in whole or in part, without prior written consent of Gerhard Bock. Any other reproduction in any form without the permission of Gerhard Bock is prohibited. All materials contained on this site are protected by  United States and international copyright law and may not be reproduced, distributed, transmitted, displayed, published or broadcast without the prior written permission of Gerhard Bock. If you are reading this post on a website other than www.succulentsandmore.com, please be advised that that site is using my content without my permission. Any unauthorized use will be reported.
Arizona book review books cactus desert living hardscape landscape design landscaping residential landscaping Southwestern U.S. succulents water-wise landscaping xeric xeriscaping