Austin, TX gardens from A to L

- May 13, 2018
As I mentioned in my previous post, I spent five days in Austin, Texas recently to join 90+ kindred spirits for the 2018 Garden Bloggers Fling. We toured a dozen private gardens and several public gardens and visited a couple of nurseries. And on the day after the Fling, I had the opportunity to see even more gardens.

Instead of a traditional chronological overview of what we say, I'm giving you a potpourri of Austin vignettes from A to Z. This installment covers A to L, this one M to Z.

Austin and agaves go together like hands and gloves. With maybe one exception, we saw agaves in all the gardens we visited. The whale's tongue agave, Agave ovatifolia, seems to be particularly popular—no surprise there.

Bottle trees seem to be a Texas thing. Or maybe they're popular all over the Southwest and South. There were bottle trees in at least half of the gardens on our tour. One garden had five or six of them!

Cactus were plentiful, both in private and public landscaping. To my astonishment, Opuntia gomei 'Old Mexico', which is rare in California, was everywhere.


Most of the time we don't even notice doors—that is, unless they're particularly ugly or particularly beautiful. These definitely fall in the latter category.

"Exotic" means evoking a distant land. There were elements of the exotic in many gardens, transporting us to Mexico, Thailand, Morocco and even Africa.

According to Merriam-Webster, filigree is an "ornamental openwork of delicate or intricate design." We saw both finely wrought ironwork and airy patterns in plantings.

Proving that everything in Texas tends to be just a little bit bigger, the rainstorm we experienced at Lady Bird Johnson Wildflower Center was unlike anything I've ever seen in California. On very rare occasions does the Sacramento area get more than an inch of rain over the course of a day. That Friday morning, Austin received almost four inches in four hours!

All of us were very thankful for the rain ponchos the Garden Bloggers Fling organizers had thoughtfully included in our swag bags. And the Lady Bird Johnson Wildflower Center gift shop did brisk business because there was nothing else to do while the clouds were wide open.

The hippo is the mascot of the town of Hutto northeast of Austin. Donna and Mike Fowler's spacious garden in Hutto had a dozen hippos. Now THAT is civic pride! 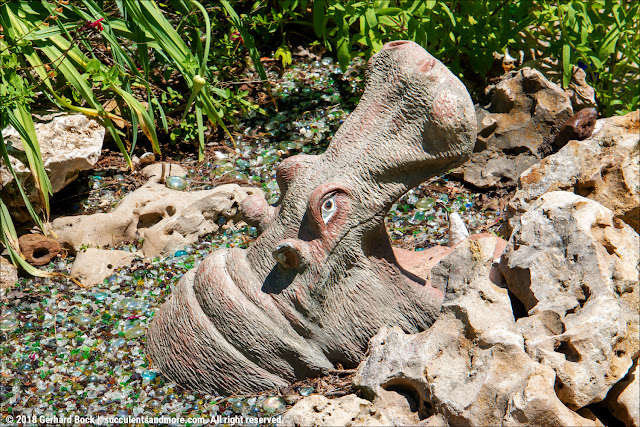 
According to Google, "the complete flower head of a plant including stems, stalks, bracts, and flower." Inflorescences were everywhere.

When you think of Austin, you may not immediately think of Japanese gardens. I didn't. But Zilker Botanical Gardens (see entry under Z) does have a small but nice Japanese garden. For me it was a unexpected but welcome surprise. 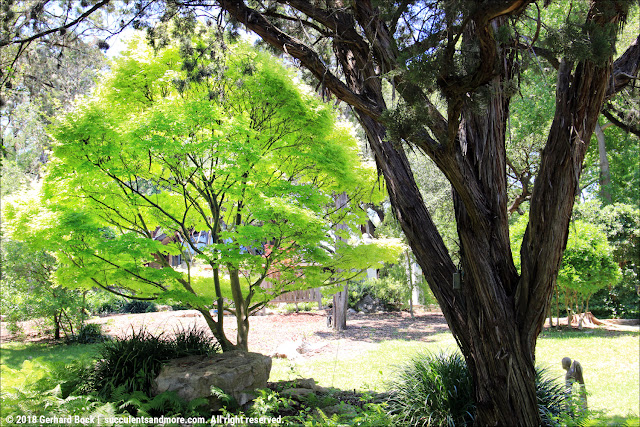 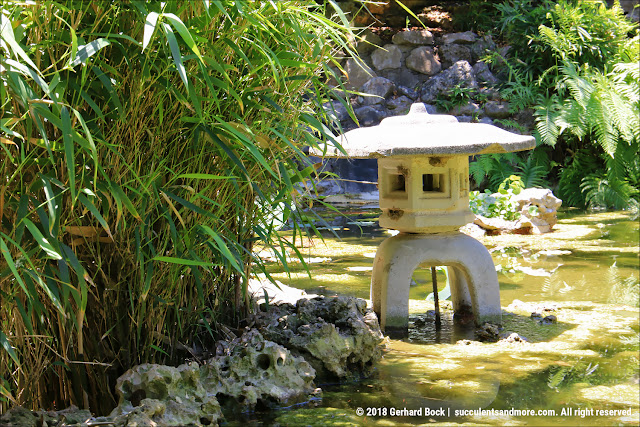 "Keep Austin Weird" is the (un)official slogan of the Texas capital. It was adopted by the Austin Independent Business Alliance in the early 2000s to get residents to buy from small local businesses instead of big corporations. In a broader sense, it embraces the indie spirit that is so pervasive in Austin. Weird means being yourself—whoever you are, whatever you area.

Coming from a liberal and independent-minded town myself, I didn't think Austin was weird at all. In fact, it felt like a much larger version of Davis, and I was immediately comfortable. What I did find odd, though, is that many (many) houses we saw displayed flags, signs or other tokens stating that we were in Texas generally, and Austin specifically. People sure love their state and town! Or else they have a bad memory and need frequent reminders where they are. 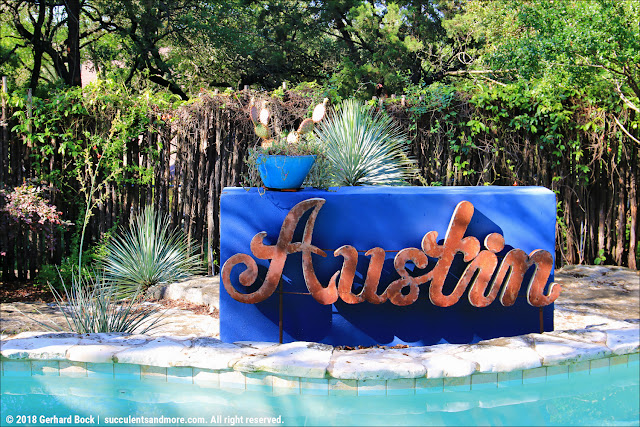 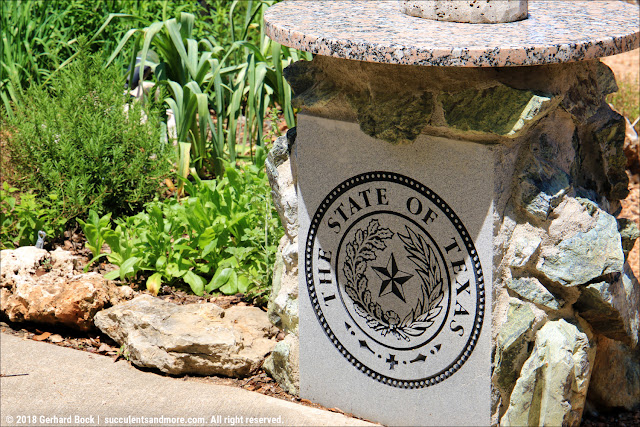 To me, "lush" means abundant greenery and plenty of water. But it also means luxurious surroundings that make you feel pampered. We saw plenty of both in Austin.

© Gerhard Bock, 2018. No part of the materials available through www.succulentsandmore.com may be copied, photocopied, reproduced, translated or reduced to any electronic medium or machine-readable form, in whole or in part, without prior written consent of Gerhard Bock. Any other reproduction in any form without the permission of Gerhard Bock is prohibited. All materials contained on this site are protected by  United States and international copyright law and may not be reproduced, distributed, transmitted, displayed, published or broadcast without the prior written permission of Gerhard Bock. If you are reading this post on a website other than www.succulentsandmore.com, please be advised that that site is using my content without my permission. Any unauthorized use will be reported.
#gbfling2018 Austin garden art Garden Bloggers Fling garden tour nurseries private gardens Texas travel
Location: Austin, Texas, USA