Succulents and steel: a perfect match

- February 16, 2018
A few weeks ago I posted the photo on the left below as a teaser of things to come. Now it's time for the reveal. There's nothing quite like finishing a project and actually liking the result! 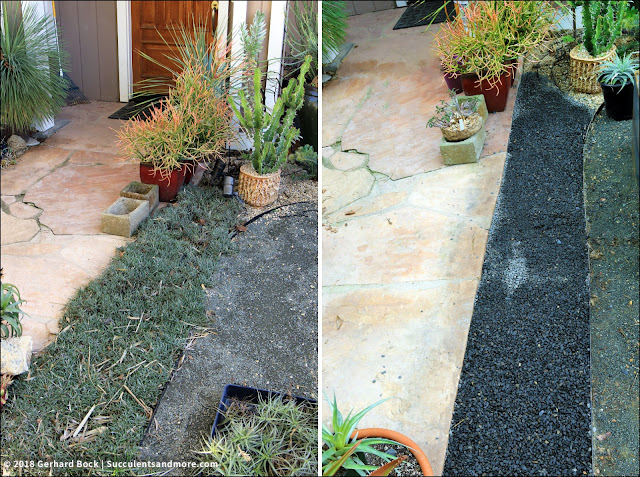 While I was pleased with the way the Dymondia margaretae had filled this 16-inch wide strip, I felt like I was letting an opportunity go to waste. Being the plant hoarder collector that I am, I'm always looking to free up more space for even more plants. This strip was a perfect takeover target.
The first step was to dig up the Dymondia margaretae. It wasn't difficult but I was still surprised by how firmly anchored its tap roots were. The dymondia didn't go to waste; I transplanted it into the “lawn” area in the backyard.

The second step was leveling the soil and topping it with rock. I initially chose limestone but it turned out to be too blue for my liking so I dumped a couple of bags (3/4 cu. ft. each) of 3/8-in. black basalt from American Soil & Stone on top. Perfect. The basalt is black when wet and neutral gray when dry.

The main feature of this strip is now a 15×15×35-inch Corten planter. I found it on eBay at a great price, with free shipping (a big benefit when buying things made of metal).

I knew right away what I was going to put in it: the Mexican fencepost cactus (Pachycereus marginatus) I'd brought back from Arizona in December 2014. It had three stems when I bought it and has grown three more since then. Here it is in the ground: 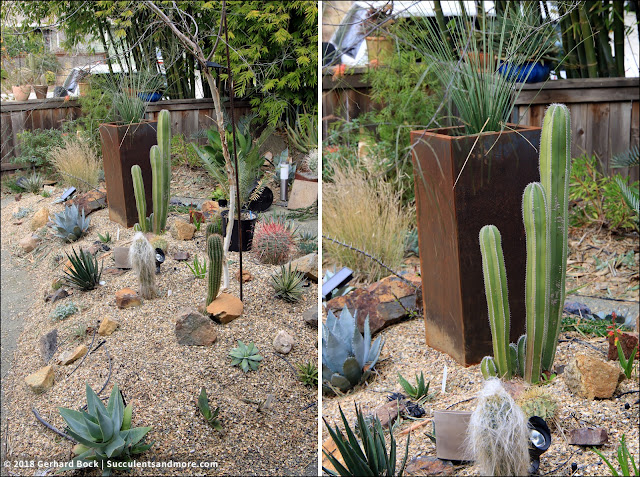 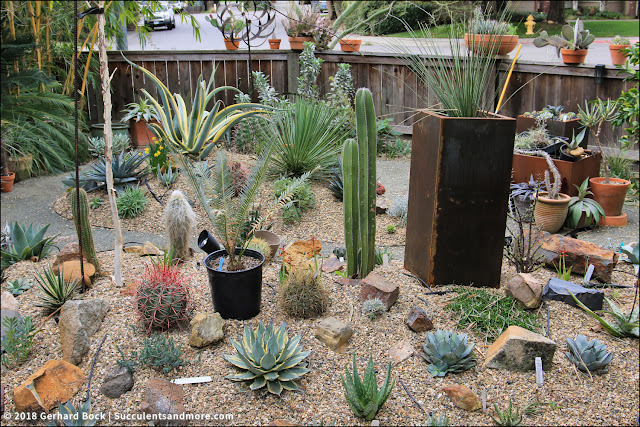 Digging it up wasn't hard. I wrapped it in two old towels and secured them with a bungee cord. Then I dug as wide a rootball as possible although I was limited by the other plants growing nearby. Fortunately, cacti generally re-root easily so it isn't critical if you chop off some roots.

Here is the cactus bundle after extraction: 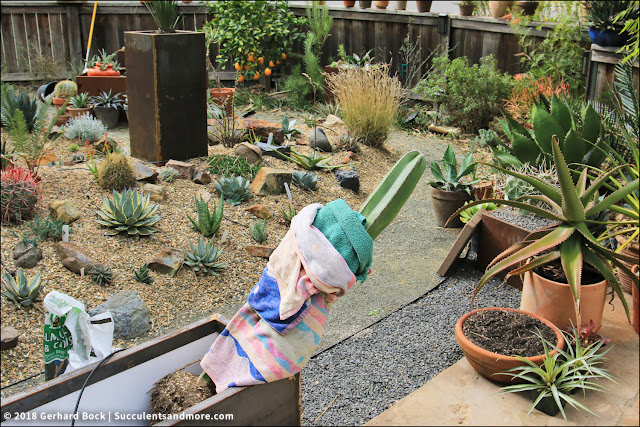 My initial idea had been to separate the six stems and space them evenly in the Corten planter. However, the stems were connected tightly and I couldn't bring myself to separating them. As I result, I centered the clump in the container. This leaves room on either side for a few more plants. The spiky thing you see on the right in the photo below is a Dyckia marnier-lapostollei. I may or may not plant it there. I have some hechtias and a few other dyckias coming in the mail, so I'm sure I'll find a combination to my liking. Update to follow. 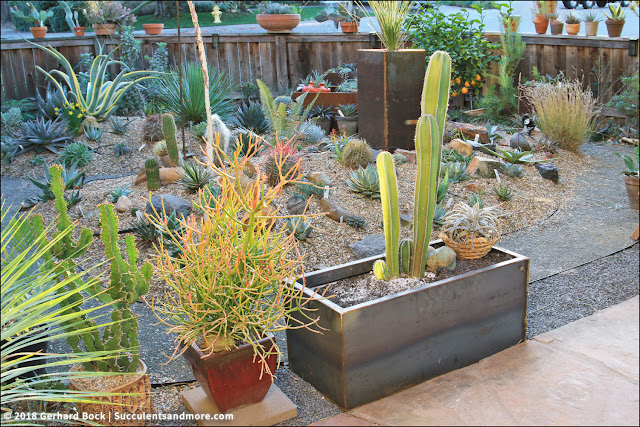 In addition to the Mexican fencepost cactus, I also moved an Echinopsis hybrid (you see it in its in new spot on the left in the photo below). This made room for the new centerpiece of this bed: Dioon argenteum, a cycad from Mexico. Right now its leaves are green, but as it gets older, it will produce leaves with a silver sheen. 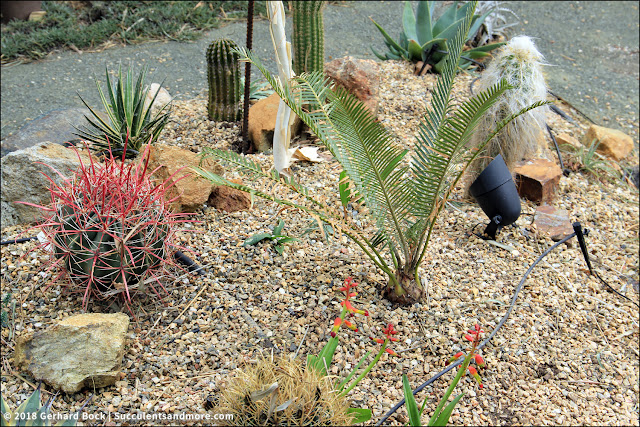 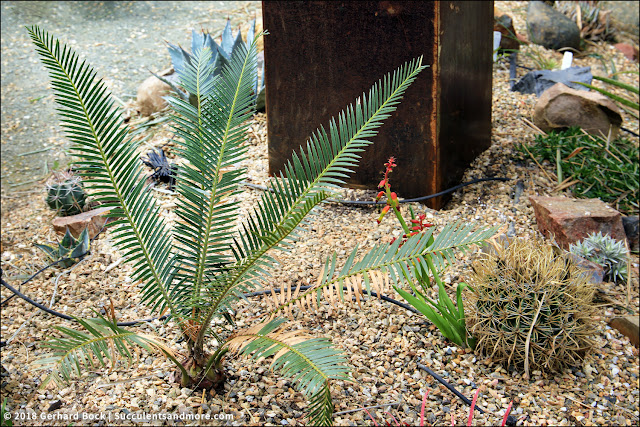 Another big change in this mound is the tall Corten planter you've already seen in the photos above. It adds an element of height that had been missing. I planted a Dasylirion longissimum, which, over time, will turn into a fountain of thin green leaves. 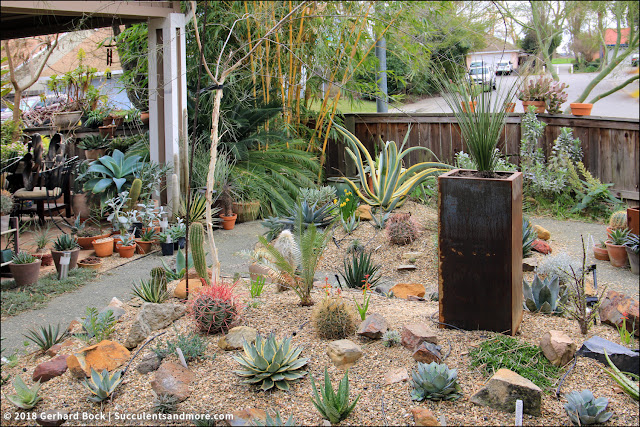 To wrap things up, there's a third Corten planter I want to show you. It's the 12×12×12-inch cube I bought in December at Roger's Gardens in Orange County. It's at the other end of the strip I filled with crushed basalt The Opuntia sulphurea plays off the Mexican fencepost cactus in the larger Corten planter. 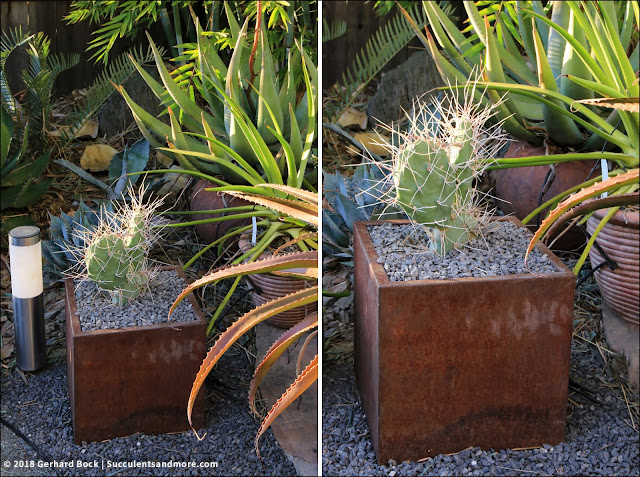 So there you have it: a small makeover that amps up the visual appeal of these areas in the front yard.
cactus containers CORTEN dasylirion dyckias front yard hechtias steel