Three Palms Nursery: a horticultural treasure in my own backyard

- February 14, 2018
Whenever I visit a city where independent nurseries still thrive, I can't help but wish for a more active gardening and nursery community where I live. While it's unlikely that the greater Sacramento area will ever rival Portland or Seattle in that respect, we do have a few small nurseries that quietly do their thing on the edge of the mainstream.

One of them, Three Palms Nursery, is right here in Davis. Well, not in Davis per se, but just a few miles outside of town in the middle of the fields. To get there, drive west on Russell Blvd until you reach the intersection with County Road 95. You can't miss the nursery.


This year, Three Palms Nursery is celebrating its 30th birthday. Given the fact that so many small nurseries have been squeezed out of existence by garden centers and big box stores, this is an impressive milestone. Even more remarkable: Three Palms Nursery is still owned and run by its founder, Phil Kitchen. The nursery was established in 1988 at the Schmeiser Ranch in rural Yolo County; the nursery name was inspired by the three 50 ft. California fan palms (Washingtonia filifera) in front of the ranch's historic 1868 home. Since 1996, Three Palms has been at its current location on Russell Blvd.


As the only production nursery in Yolo County, Three Palms specializes in plants that can handle our hot and dry summers and alkaline water. The selection may not be largest (about 250 varieties of ornamentals as well as fruit and shade trees), but Phil Kitchen is very careful about what he sells. This means that customers can be sure that their purchases won't turn out to be duds—a common problem with large garden centers that carry plants grown in a different climate (like the Central Coast or Southern California). 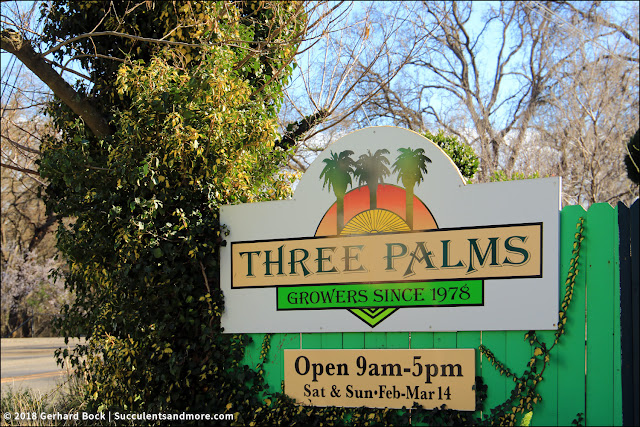 A few years ago, Phil started to bring in plants from Mountain States Wholesale Nursery in Glendale, Arizona to expand Three Palms' water-wise selections. These plants are marketed under the "Arizona Collection" banner and include not only succulents like agaves, dasylirions, fouquierias, yuccas and opuntias but also shrubs like calliandras and leucophyllums as well as trees like desert willows, palo verdes and mesquites.

Beyond the Arizona Collection, Three Palms carries unthirsty ornamentals from Australia and New Zealand and a good selection of California natives.

To make it even easier for customers to plan in advance, the Three Palms website contains the nursery's inventory, complete with prices. This may not seem like a big deal, but it is to me. I like to browse plant lists ahead of time so I can arrive prepared with a shopping list in hand (or, rather, on my phone).

And that's exactly what I did on Sunday. I knew what I wanted, and I was able to find everything I was looking for. To see what I bought, scroll to the bottom of this post.

Since Three Palms is a small operation, with Phil Kitchen doing just about everything from plant propagation to ringing up customers' purchases, it's easy to get your questions answered. That's what sets independent nurseries apart from garden centers where trying to get useful information is often an exercise in futility.

There's something else about Three Palms I want to mention: its prices. While the trunked Yucca rostrata above may seem expensive at $400 (not really, considering they're easily 10 years old and had to be cared for all this time), the prices for everything else are extremely reasonable. 1-gallon plants are in the $7 to $10 range, 2-gallon $18 to $25, and 5-gallon $18 to $35. Three Palms also carries some plants (especially shrubs and trees) in 10- and 15-gallon sizes; these are $65 to $100. 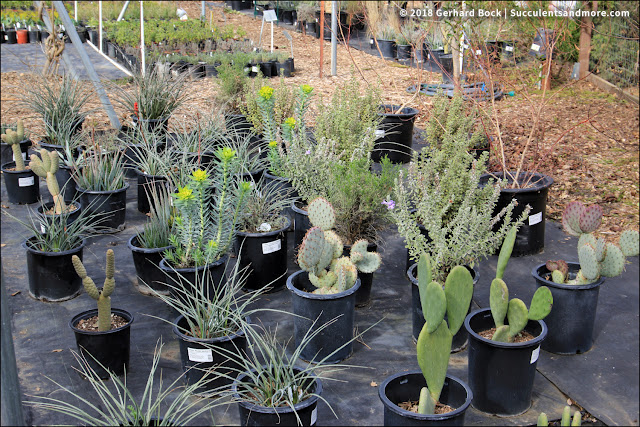 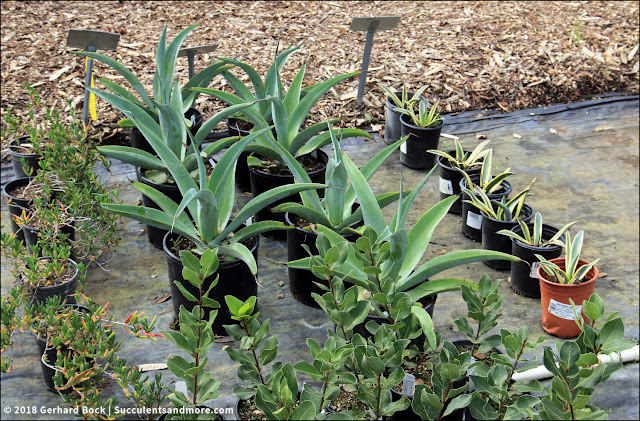 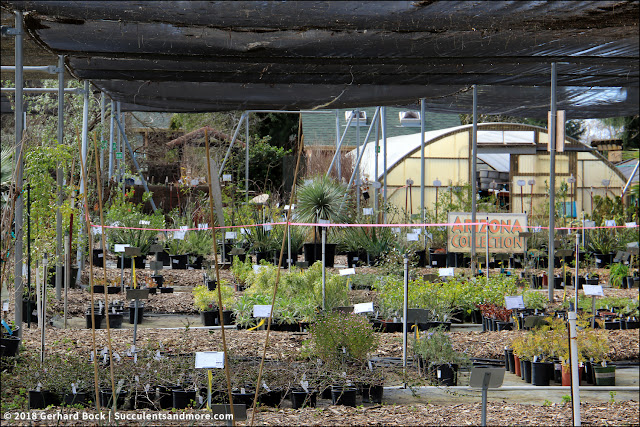 After I was done in the nursery, I strolled through the Greg Lynn Memorial Arboretum—the "wild" part of the 4-acre property accessed via a set of stairs from the nursery. Towering native oaks provide shelter for the plants Phil has planted along Putah Creek (which is dry most of the year). The Arboretum honors Greg Lynn, a lecturer in the UC Davis Design Department who inspired Phil to pursue his career as a nurseryman many years ago. This article on Davis Life Magazine has more information about the Arboretum.

As you can see in these photos, the oaks haven't leafed out yet so the Arboretum looks a bit bare. In a month or two, it will be quite different. I will post updated photos later in the spring. 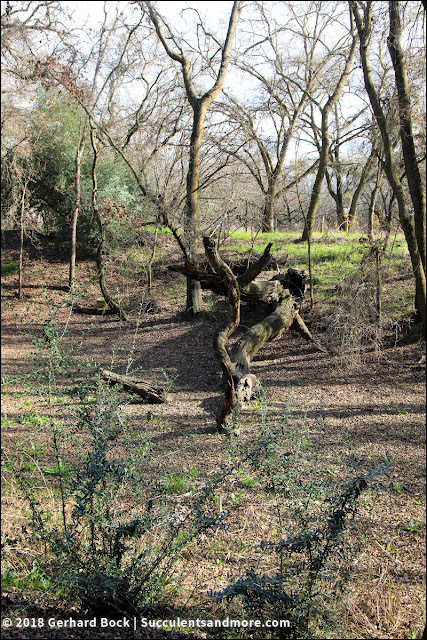 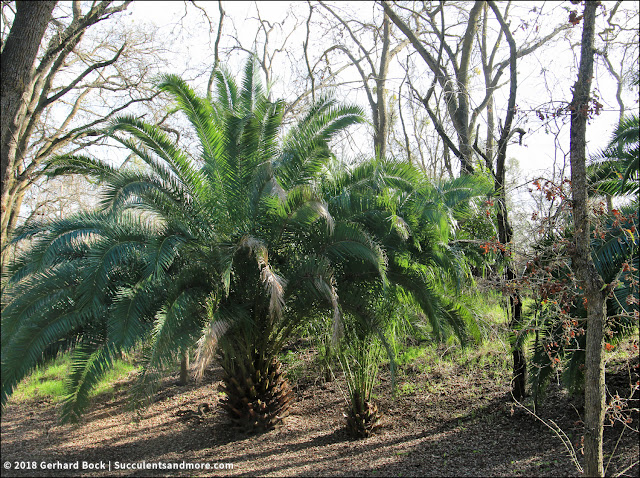 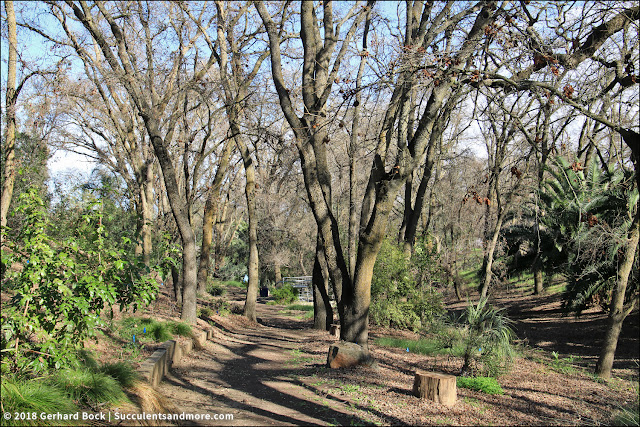 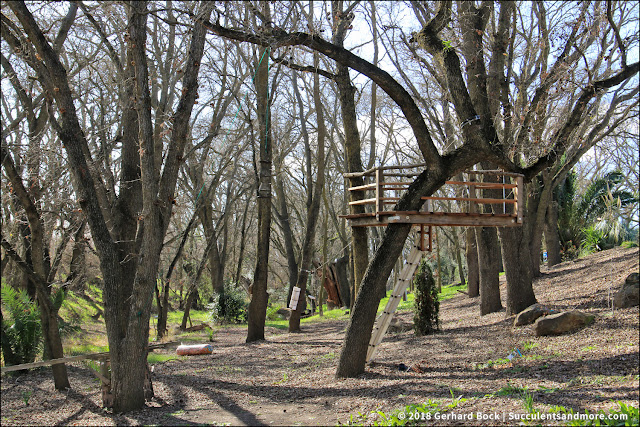 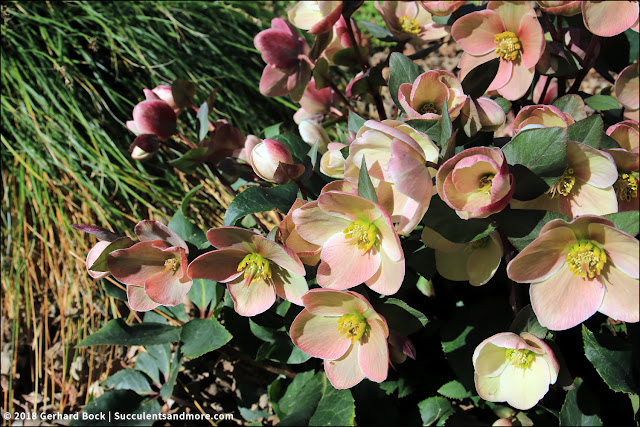 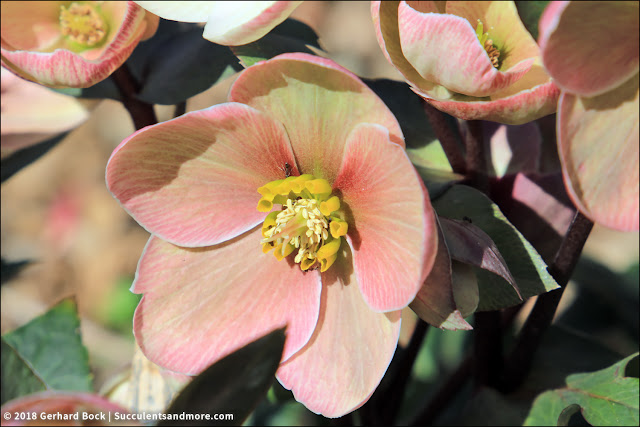 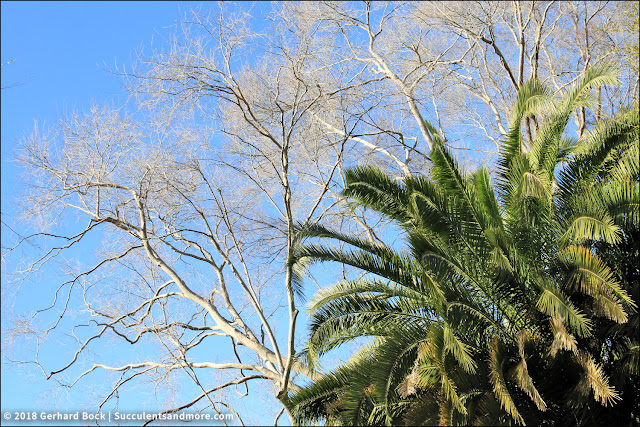 Phil Kitchen said that the nursery will receive a lot of new inventory in March—the perfect time for me to go back. Check out Three Palms' website for updated information on inventory and plant sales. Right now, through the end of February, you get 20-50% off on all container plants.

And here are the plants I brought home from my outing to Three Palms Nursery:


I forgot to photograph my plant haul, but I'll show you were they went in an upcoming post.