If I had a I’m a Plant Geek t-shirt, I’d wear it proudly. But my geekery goes beyond the plants themselves. I also love the language that goes with it. Not necessarily the hardcore science of botany—that can make my eyes glaze over just as easily as an explanation of string theory—but the precise terminology used to describe plants and every aspect of their appearance and behavior.

I should add that I’m a linguist by profession and had five years of Latin in high school (not an uncommon thing at a European grammar school in the late 1970s) so understanding the language of botany is a bit easier for me. But you don’t need any prior knowledge of Latin or Greek to figure things out. There’s a lot of help on the internet. As always, Wikipedia is a great place to start. Check out their List of Latin and Greek words commonly used in systematic names and Glossary of Botanical Terms. The Missouri Botanical Garden has a detailed Grammatical Dictionary of Botanical Latin. A quick Google search will yield even more useful hits.

But if you’re a bit old school—like me—and prefer a printed book, you’re in a luck. Timber Press, ever on the leading edge of publishing in gardening and horticulture, has just released A Botanist’s Vocabulary. This 224-page hardcover reference contains definitions of 1,300 botanical terms, many of them accompanied by clear and accurate illustrations. The text was written by Susan Pell, Science and Public Programs Manager at the United States Botanic Garden in Washington, D.C., and the illustrations are by Bobbi Angell, a scientific illustrator for the New York Botanical Garden and other academic institutions. 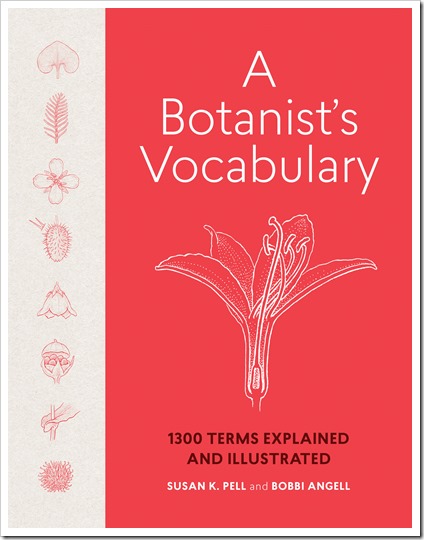 Sayings like “a picture is worth a thousand words” may be considered clichéd, but typically they also hit the nail on the head. That’s never been more true than for this book. While understanding a term like “lanceolate” purely based on words (“lance- or sword-shaped with the widest point toward the base”) may require you to read its definition multiple times, seeing an illustration once is usually enough to get it. The line drawings by Bobbi Angell are a major strength of this book. I found the terms supported by an illustration to be much easier to understand than those who aren’t. Only about 60% of the terms are illustrated. The other entries rely purely on Susan Pell’s definition but would be difficult, if not impossible, to illustrate (adjectives like “emergent” or nouns like “foliage,” for example).

Susan has a knack for describing challenging terms in a language that is fairly easy to understand but sometimes you end up going from one term to another to hone in on the meaning. Here’s an example, admittedly a very obscure one:

“samaroid schizocarp” is defined as:

fruit derived from a two-carpellate ovary that splits at maturity into two-winged sections (mericarps that resemble samaras); e.g., the fruit of maples (Acer) 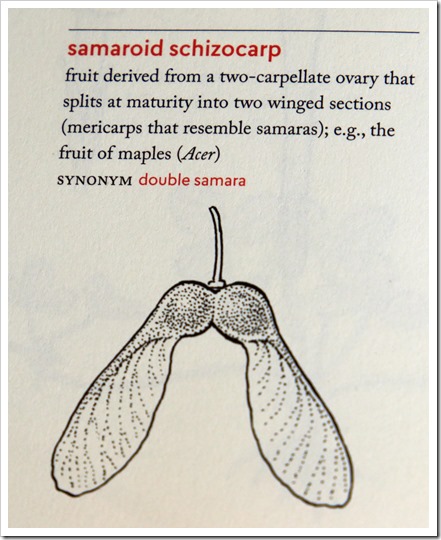 Figuring all of this out required me to go from “samaroid schizocarp” on page 178 to “carpellate” (“having carpels”) on page 48 and “mericarp” (“individual section of a schizocarp, derived from a single carpel in a syncarpous pistil”) on page 128 to “schizocarp” (“fruit derived from a two- to multicarpellate pistil that splits at maturity into individual segments”) on page 180 to “syncarpous” (“gynoecium consisting of two to many fused carpels”) on page 201 to “gynoecium” (“female reproductive portion of the flowers, consists of single or multiple pistils”) on page 102 to, finally, “pistil” (“individual component of the innermost whorl of the flower […]”) on page 155. At this point I could have gone to “whorl” on page 218 but I had forgotten where I started in the first place.

I’m not blaming Susan Pell in the least. This kind of jumping back and forth is part and parcel of figuring out complex definitions, but it also exposes the book’s weakness: It’s an old-fashioned book that requires you to flip pages to go from one term to the next. If it had been an online reference, I could have clicked from one term to another and another in a matter of seconds (OK, minutes, adding the time necessary to understand it all).

On the other hand, a printed book like A Botanist’s Vocabulary is nice to have if you’re holed up in a beach house that doesn’t have internet access and you feel like delving into the intricacies of Howard Scott Gentry’s monumental Agaves of Continental North America. While you may not be able to fully unravel all its mysteries, you’ll be able to make good progress on a description like this one for Agave arizonica:

And that’s just the beginning. There are also words like “slender racemose-paniculate,” “peduncular” and “cylindric-urceolate” that you could look up. 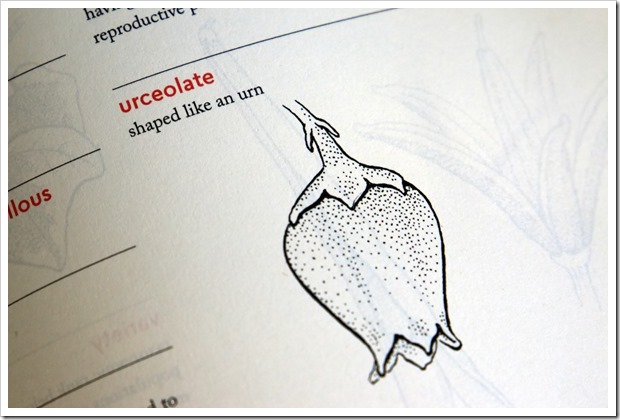 I realize that none of this is child’s play and a lot of it isn’t even necessary to grow and enjoy plants. But having A Botanist’s Vocabulary on your book shelf is a bit like having a box of assorted Band-Aids in your bathroom. It gives you peace of mind knowing you’re covered if and when you need it.

Note: Timber Press provided me with a complimentary review copy of this book. You can see a book preview here.