Transplanting a barrel cactus from a pot into the ground

We worked all weekend on our lawn removal projects—both in the front and in the back yard. There are still a few things left to do so the big reveal will have to wait a little while longer. But I want to share with you how my wife and I transplanted a big barrel cactus from a pot into the ground. 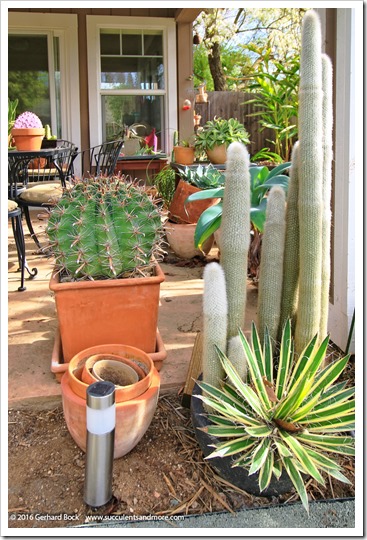 I bought it in February 2011 at Mariscal Cactus & Succulents near Palm Springs. It was little smaller then; I’d say it’s grown by about 2/3. It’s now 16 inches tall and wide, not measuring the spines that stick out another inch on each side.

Here’s what we did to transplant this barrel cactus from its pot on the front porch into one of the succulents mounds that now occupy what used to be the front yard lawn.

This is the most obvious step. Dig a hole in the ground where you want the cactus to go. Make it slightly bigger than what it needs to be. 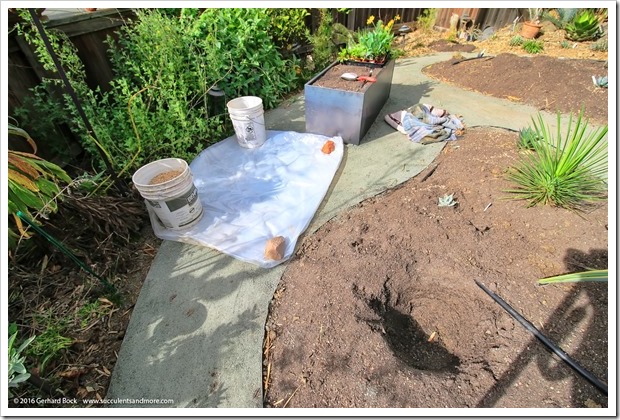 STEP 2: PROTECT THE CACTUS—AND YOURSELF

I keep old towels, rugs, bath mats etc. on hand for this very purpose. I wrapped the cactus in an old IKEA area rug and a bath mat and held them in place with a couple of bungee cords. 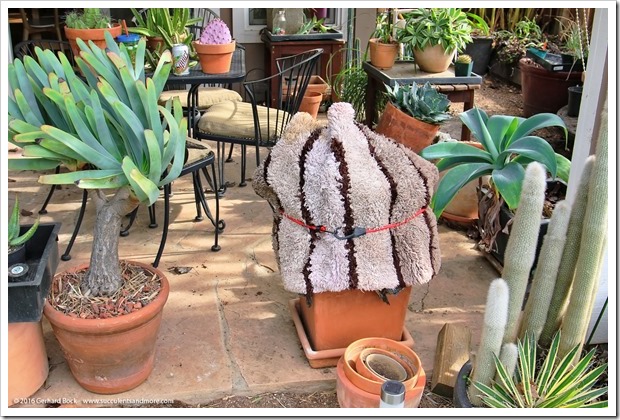 I failed to take pictures of this because it required two sets of hands. My wife and I carried the potted cactus over to the white tarp you see in the second photo above (I didn’t want to make a mess on the new path). I gave the pot a number of whacks with a rubber mallet to loosen the roots that might have attached themselves to the sides of the pot. I then laid the pot on its side and pulled on the cactus while my wife pulled on the pot. At first the cactus wouldn’t budge. I was getting ready to smash the pot (the cactus is worth more than the pot) when the cactus finally popped out. I lost some roots but that’s OK.

The hole I’d dug turned out to be a bit bigger than it needed to be so I dumped some 3/8 inch rocks in it. I set the root ball on top of that and filled the hole around it with soil and more 3/8 rocks. The soil we’d had brought it is very loose and already has both pumice and small pieces of lava rock in it, but with cactus it’s virtually impossible to have too much drainage.

IMPORTANT: It’s important to plant the cactus in the same orientation it is used to. In other words, the side that was facing south when the cactus was in the pot should still be facing south after planting. Otherwise the cactus will sustain unsightly sunburn. This kind of damage is permanent and will never go away. 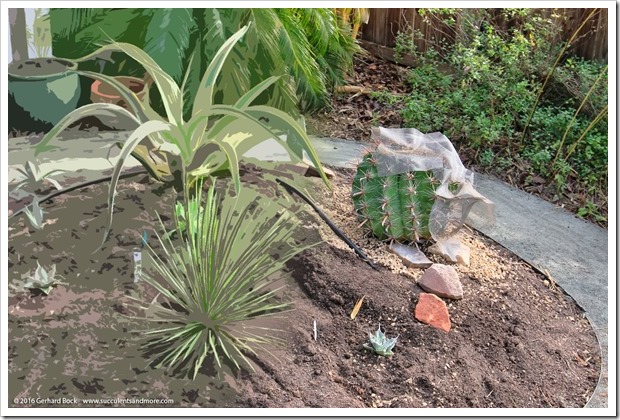 I blurred out the left side of the photo above because I don’t want to give away too much yet. Look for the grand reveal of the front lawn removal project soon.

Since our barrel cactus used to live on the front porch where it only received directional sun in the mid- to late afternoon, I covered it with pieces of window screen to prevent sunburn. I’ll leave them in place for a week. Then I’ll remove the screen for 1/2 day for another week. After that, I’ll take it off altogether. I’m probably being too careful but the last thing I want is for my cactus to get horrible brown spots from sunburn. 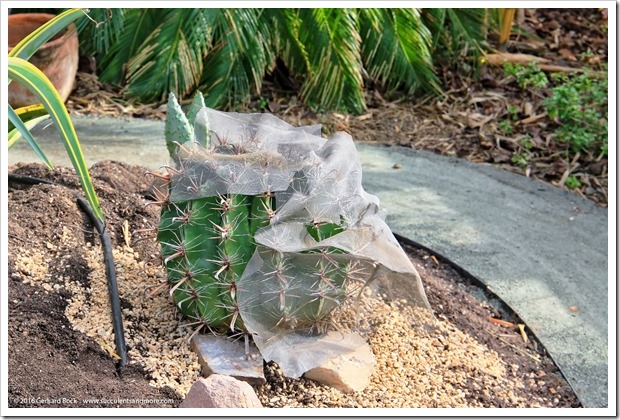 None of this is rocket science, but many people hesitate to transplant larger cactus. The key is to protect yourself (so you don’t get hurt) and the cactus (so it’s spines don’t get broken or its skin damaged).

NOTES ON WATERING: I typically wait a week or 10 days before giving a transplanted cactus some water. This allows the roots to heal in case they were damaged.

I recently learned from Laurin Lindsey of Ravenscourt Landscaping & Design in Houston, TX that seaweed extract is beneficial in preventing transplant shock. I plan on giving my barrel cactus a dose as soon as my order of Maxicrop Liquid Seaweed arrives.