I’m fond of this barrel cactus. I brought it home from Mariscal Cactus & Succulents in Desert Hot Springs on our February 2011 trip to the Southern California desert. The guy at the nursery said it was a “fishhook cactus,” which I took to mean Ferocactus wislizeni. However, when Greg Starr was here in the spring, he thought it was Ferocactus herrareae, which some taxonomists consider a subspecies of Ferocactus wislizeni. Whatever it may be, exactly, I’m emotionally attached to it, nasty spines and all.

Take a look at the photo below. From a distance it looks good, doesn’t it? 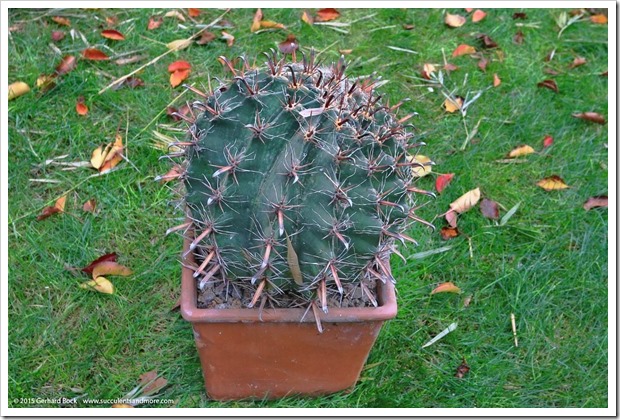 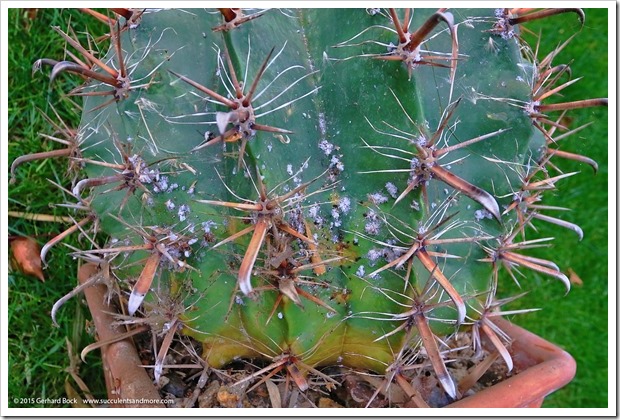 Yes, that weird noise in your ears was me screaming through cyberspace.

The fluffy white stuff isn’t an awkward attempt at flocking this poor cactus for the holidays. No, it’s from the scourge of my gardening life: mealybugs. You’d think the epidermis of a cactus is too thick for mealybugs to penetrate but apparently they’re getting something otherwise they wouldn’t be here. They were having the time of their lives this summer, no doubt because of the heat and drought.

I chose to attack the problem with the most low-tech solution possible: water. I hauled the pot out to the front law and tipped it over so it rested on a piece of wood. This would allow me to use a hard, directed spray from the bottom of the cactus to the top.

While I was setting everything up, it started to rain. I decided to wait so the rain could soften up the mealybug gunk. When it stopped a few hours later I blasted everything off with a hard spray. 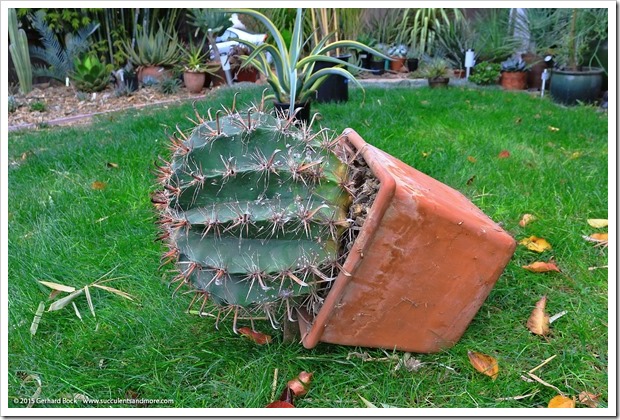 Remarkable how effective this was! My cactus is nice and clean now. Of course I have no idea what’s in the soil. I suspect that’s where the mealybugs are hiding. The first order of business next spring will be to administer a good dose of system insecticide. Maybe that’ll keep them in check. 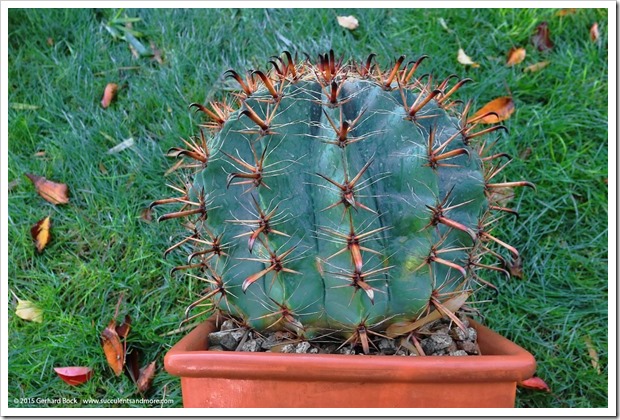 All in all, the mealybugs did relatively little damage to the cactus. It’s epidermis is thicker, after all, than that of a sempervivum or echeveria—favorite mealybug snacks.