Pictures from a long, hot summer

I posted this screenshot from Weather Underground on Succulents and More’s Facebook page the other day: The other thing on people’s mind are wildfires. The photo above, taken last week from our upstairs loft, shows the smoke-filled sky towards the west. The smoke was from the Wragg Fire near Lake Berryessa, about 30 miles west of here as the crow flies. It burned 8,000 acres and is now 95% contained. In addition to smoke, the fire also left fine particles of ash in our garden. 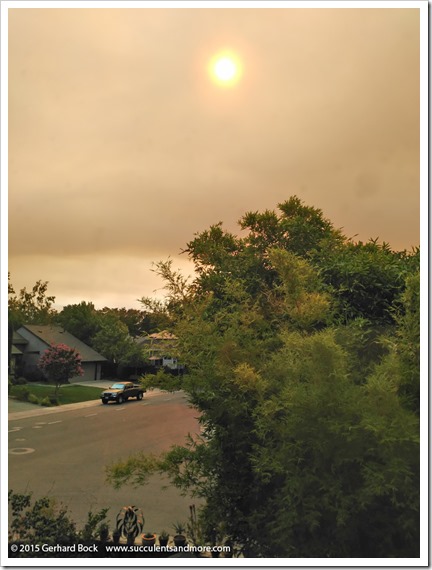 Another fire, the Rocky Fire, is burning 70 miles northwest of here (as the crow flies). This one is much bigger, 47,000 acres, and is only 5% contained. We smelled smoke yesterday, and today the sky is filled with a yellowish haze. It has all but obscured the sun and is casting a strange, almost apocalyptic light on the world.

Neither the heat nor wildfires are anything out of the ordinary but given the record drought, things seem more dire this year. There’s an unsettling sense of foreboding, a feeling that things could get worse before they get better. Most of California is so dry, it could go up in flames in a heartbeat. (Another fire is burning in far northern California and is threatening the town where my wife grew up; residents have been told to evacuate.)

Rain is still months away. Unlike Southern California, we haven’t had any precipitation since May.

Some parts of the garden look fairly good, others not so much. This Leucospermum ‘Scarlet Ribbon’, my favorite plant this spring, has bit the dust. I don’t think it was a lack of water as much as the unrelenting heat. (I still have another leucospermum in the backyard; it’s in a container and only gets partial sun. It’s doing OK.) 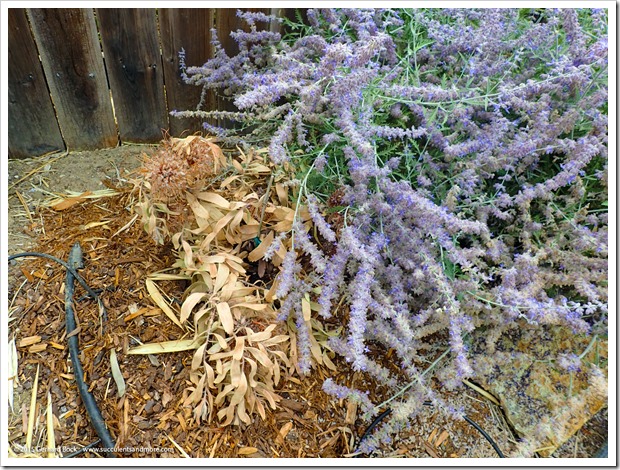 Succulents and shrubs native to hot places (ike the baja fairy duster and Texas ranger in the next couple of photos) are thumbing their noses at the heat. 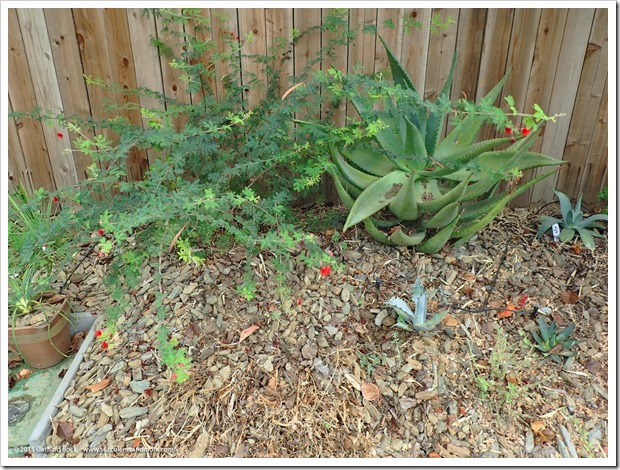 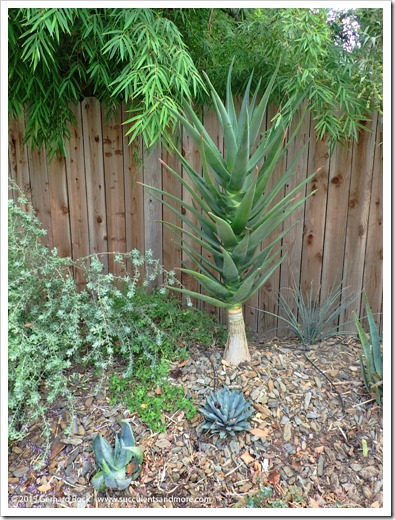 But other perennials that I thought were heat-tolerant, like chocolate flower (Berlandiera lyrata) and sundrops (Calylophus hartwegii), have fried. Maybe they’re not really dead, just dormant? I cut them back to the ground and am hoping for a rebirth in the fall. 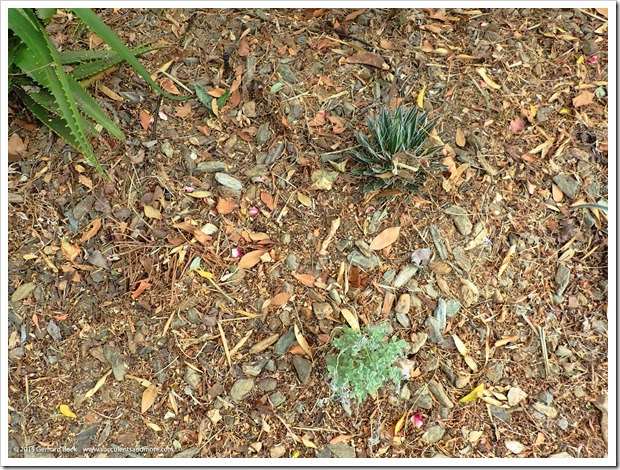 My tower of jewels clump (Echium wildpretii) continues to do well. One of the rosettes flowered this year. Odd, since all the rosettes are the same age and should have flowered together. I expect the others to put on a show next spring. 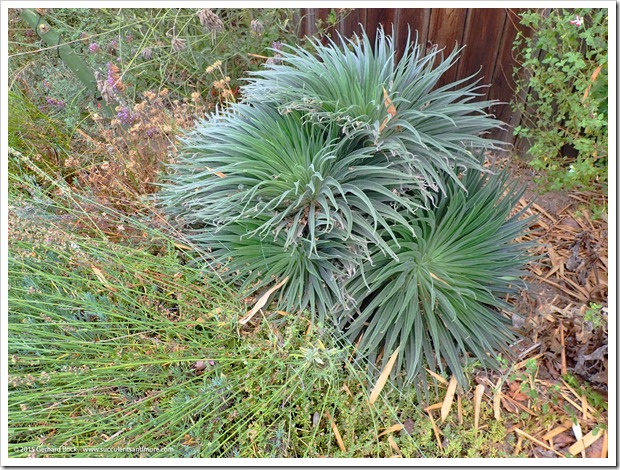 The driveway succulent bed looks the same as always. The ‘Desert Museum’ palo verde looks pristine; the heat doesn’t faze it one bit. 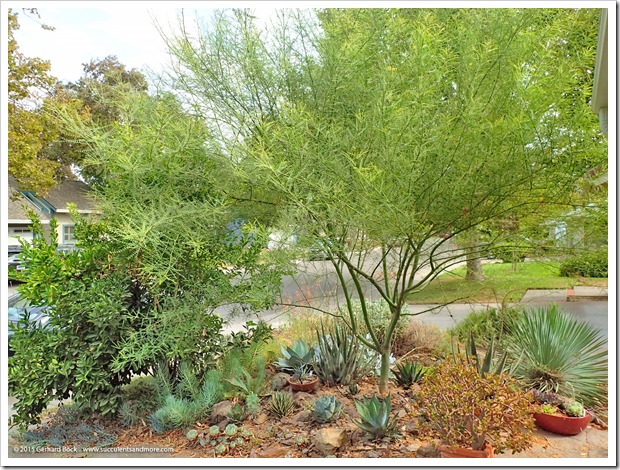 Inside the front yard fence is a tangle of perennials (mostly sages and globemallow). I cut everything back this morning so we’ll enjoy fresh growth in the fall. 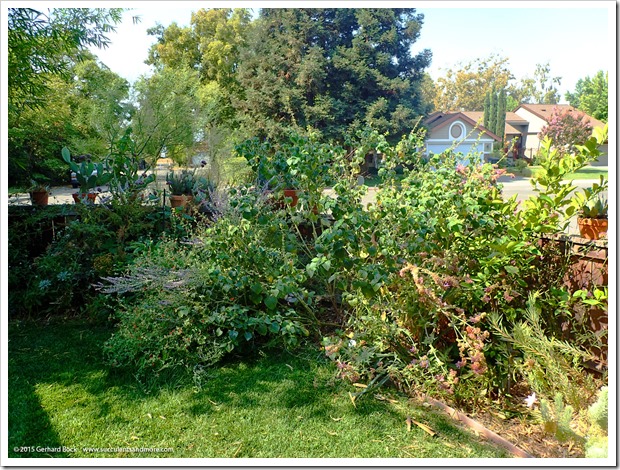 On the front porch things look unchanged. Agave mitis (left) and Agave attenuata ‘Boutin Blue’ get by with weekly watering. 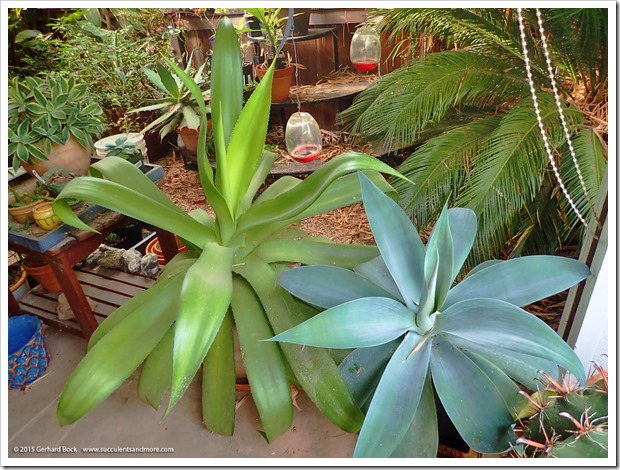 In the backyard, our angel wing begonias have been blooming for months now, with no end in sight. They’re on drip irrigation and get watered once a week. I’m very surprised by how good they look. 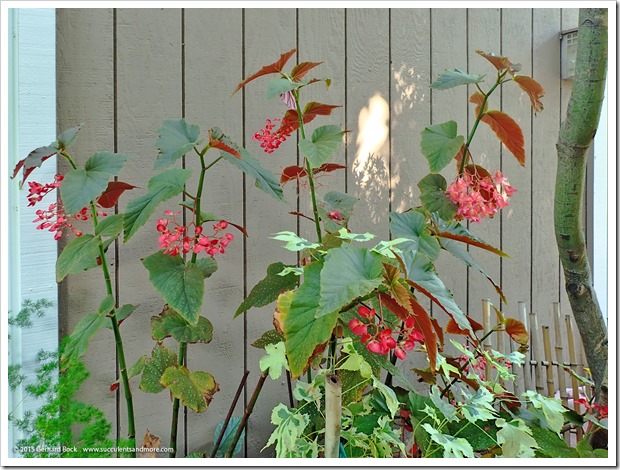 My two remaining yellow lotus bananas (Ensete lasiocarpum) are thriving thanks to gray water from the kitchen: 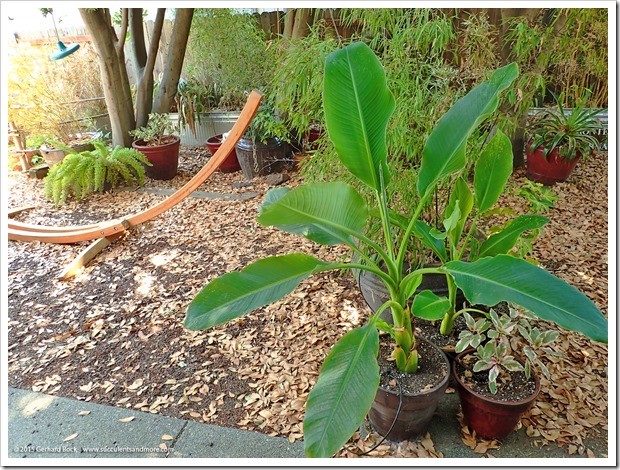 Growing in a stock tank under the bay trees, this bamboo, Phyllostachys aurea ‘Koi’, is hanging in there, another recipient of gray water from the house. I wouldn’t call it ecstatically happy, but at least it’s still alive. 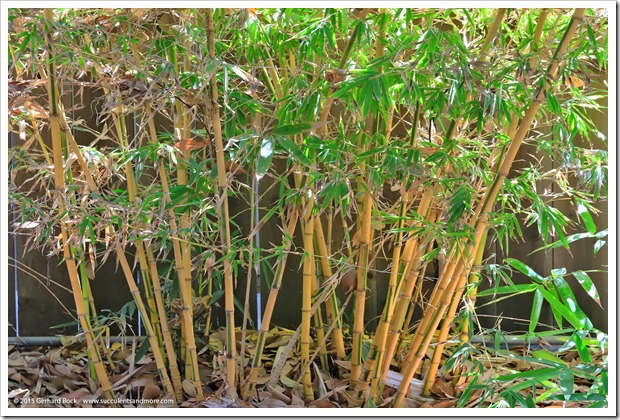 One of the two remaining hostas, ‘Climax’, continues to defy my expectations: I always expect it to die, but it thrives. 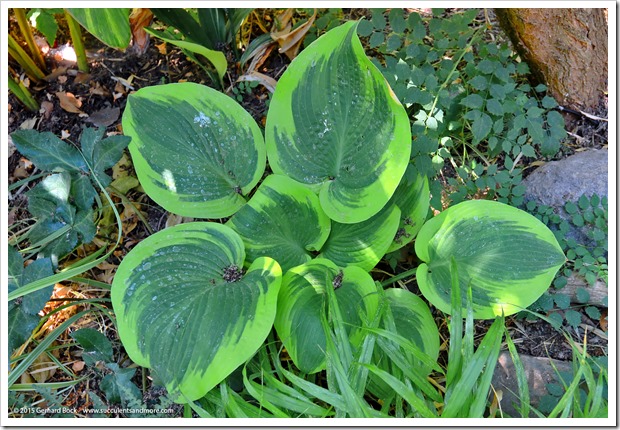 My favorite plant in the backyard at the moment is the dwarf jacaranda (Jacaranda mimosifolia ‘Bonsai Blue’) I bought in early June. It’s absolutely loving its new home and is growing like crazy: 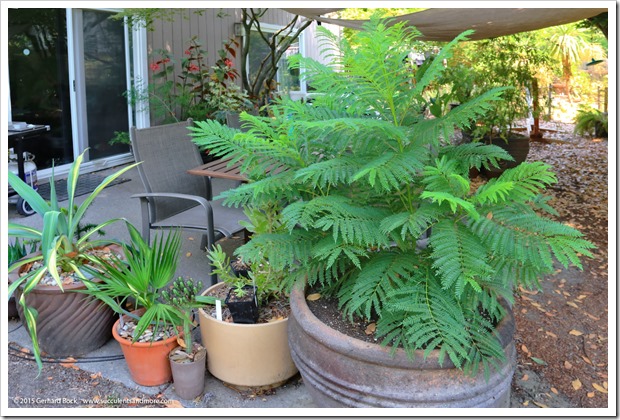 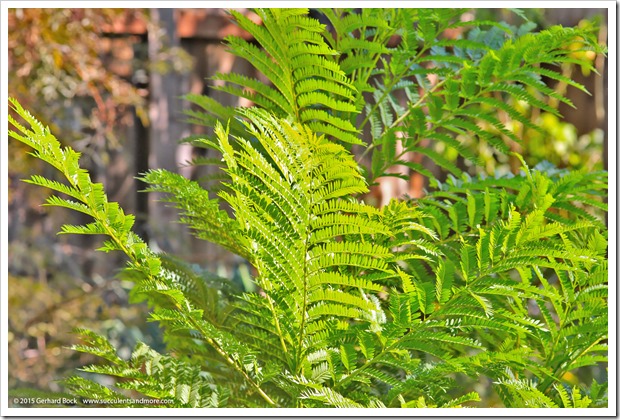 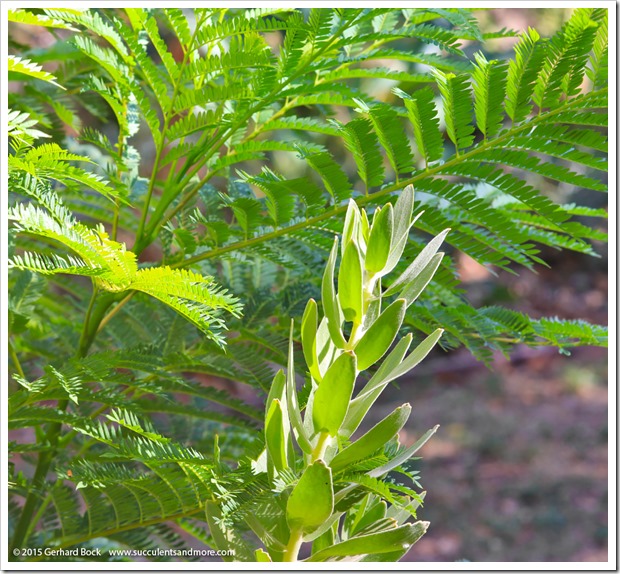 The plant in the foreground is my other leucospermum, a hybrid called ‘Goldie’. It’s doing well in this spot. Maybe it’ll bloom next spring? 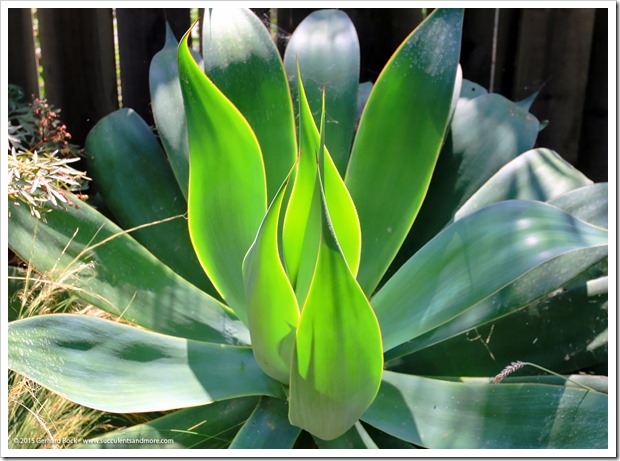 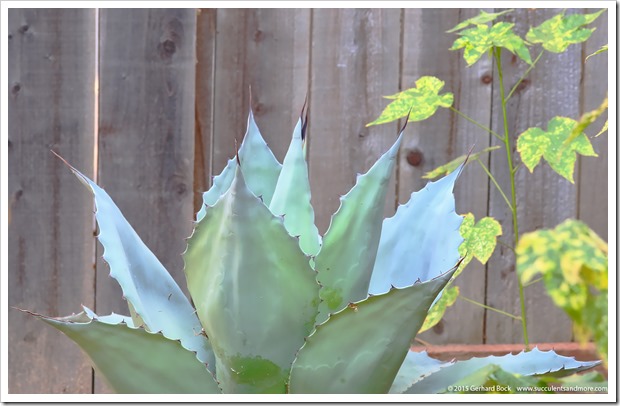 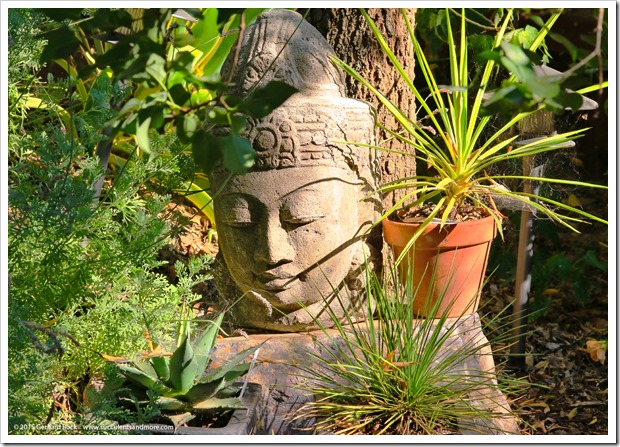 I love this corner, my shrine to Guanyin 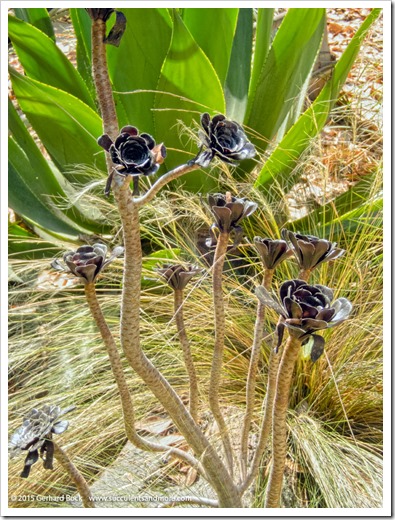 Many people don’t like the look of dormant aeoniums… 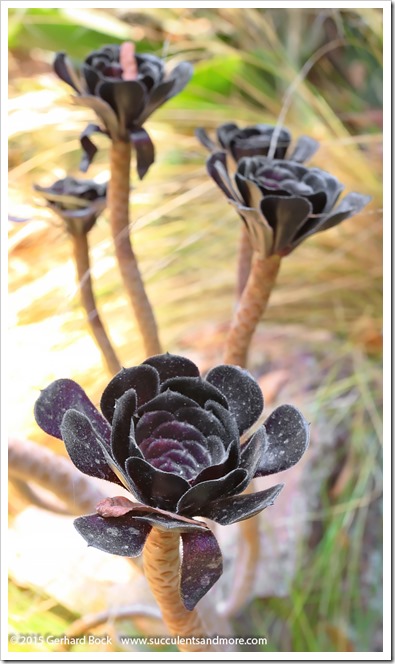 …but to me this Aeonium ‘Zwartkop’ looks like a metal rose

In spite of the heat and lack of water, there’s still plenty of life in the garden. You just have to look closer at this time of year. You might find something like this: 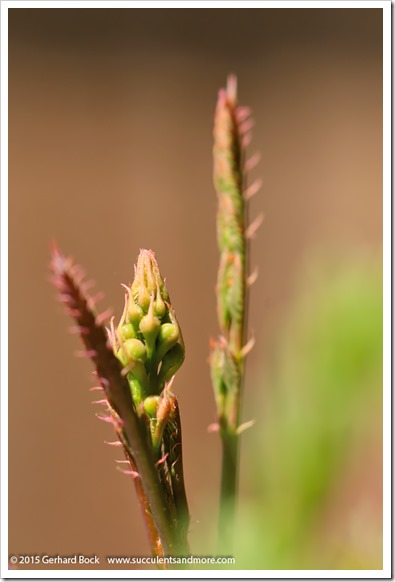 The red bird of paradise (Caesalpinia pulcherrima) I bought at Lowe’s in Phoenix, AZ in early January is finally going to bloom!