The flowering Agave desmettiana ‘Variegata’ near our front door has made frequent appearances on this blog (1 2 3 and others). I was going to wait until the fall before removing the bulbil-laden flower stalk, but unfortunately it was leaning so much that getting to the front door was getting ever more challenging, especially for delivery folks with packages. 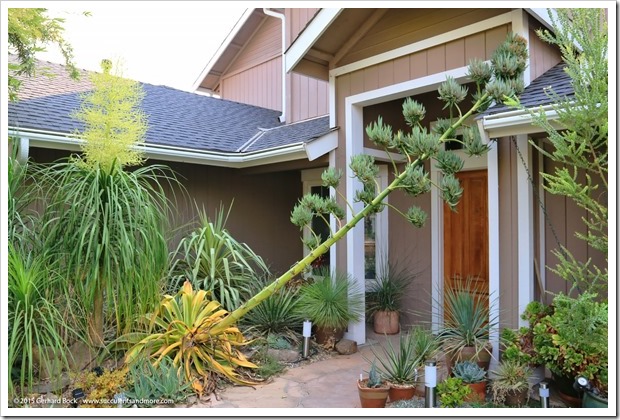 For a brief moment we considered staking it somehow, but having a wooden pole protrude into the walkway wouldn’t have made access to the front door any easier. So yesterday we decided to bite the bullet and cut the big boy down. 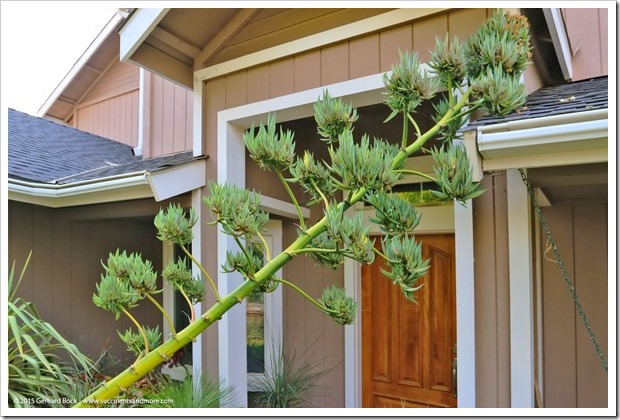 And then came the saw: 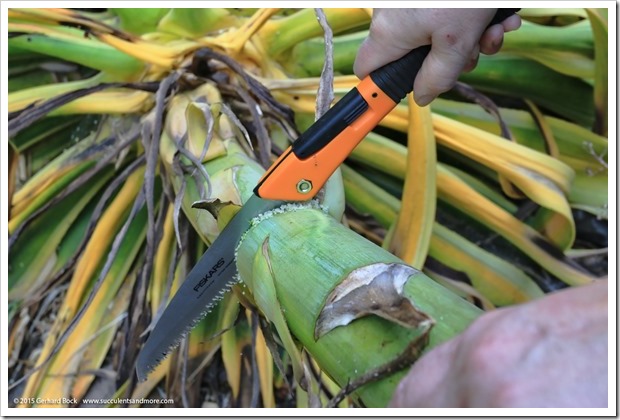 Bulbils? Have we got bulbils! 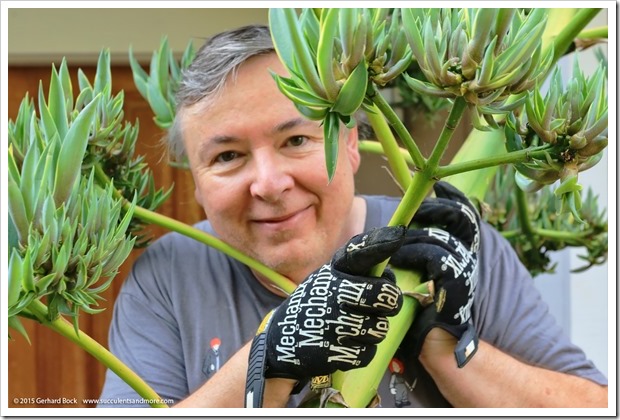 I had a good idea that the stalk was heavy, considering how many bulbils there are and how much they have grown. But I didn’t fully realize how much it weighed until I was trying to move it. Talk about top heavy! 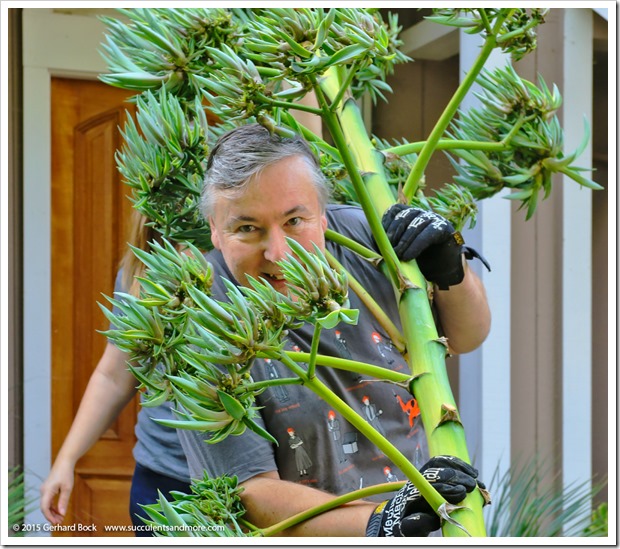 The stalk was solid and quite woody. 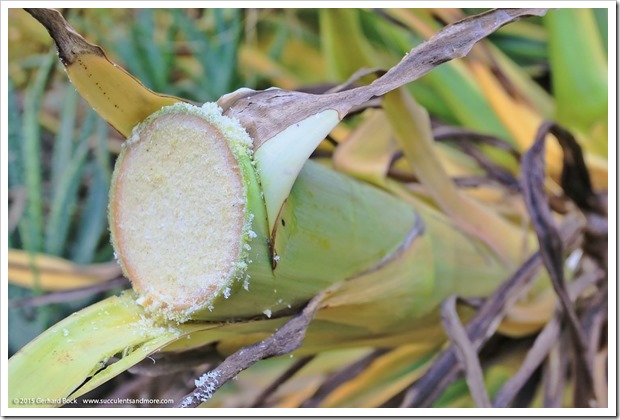 No more obstacle in the way! 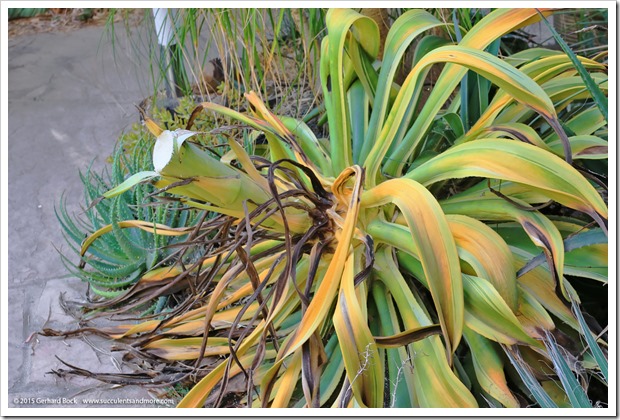 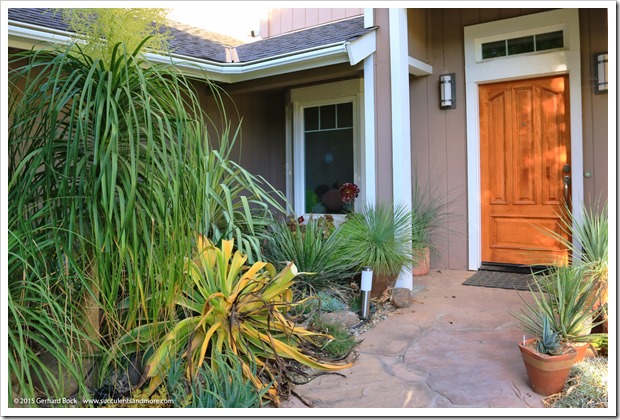 But fall (and cooler weather) can’t arrive soon enough for me. I’ve got so many projects to tackle, including removing the Agave desmettiana rosette and the pups underneath it. There are at least three. In fact, I’m thinking of giving this entire planting bed a makeover by swapping out most of its residents (minus the ponytail palm triplet and the Yucca rigida behind it). There’s still plenty of time to work out the details…

In the meantime, the Agave desmettiana flower stalk is propped up against one of the bay trees in the backyard. We knocked off a few dozen bulbils carrying the stalk around the side of the house, but there are plenty left. I’m hoping the remaining bulbils will grow a little more, provided there’s any energy left in the stalk. Then I’ll strip them all off and pick out the most promising 50 or so. They’ll go in an unused vegetable bed in the backyard so they can root and put on some size before they get rehomed—I already have enough Agave desmettiana ‘Variegata’ to last me for years. Don’t get me wrong, this is a very nice medium-sized agave with fairly people-friendly leaves (except for a long terminal spine), but I’m ready to mix things up. 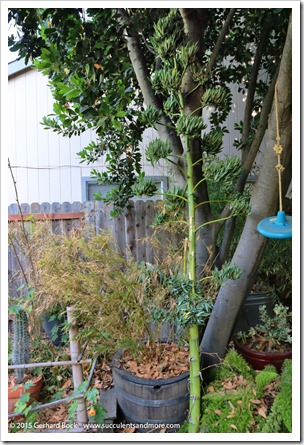 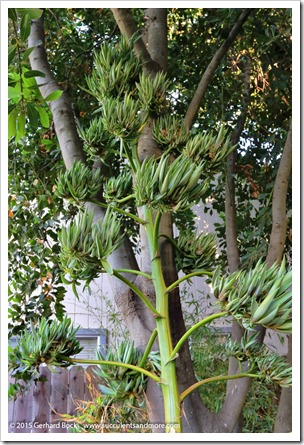 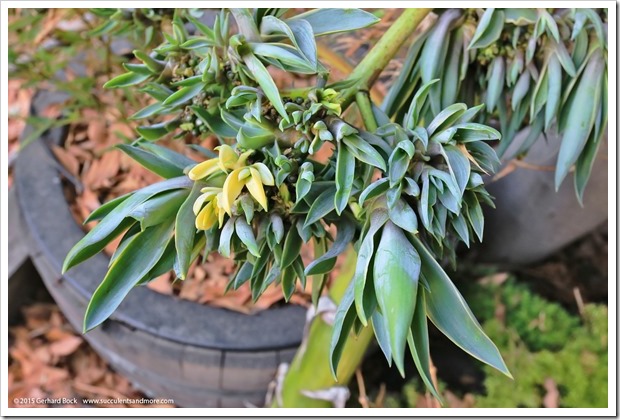 That albino pup in the photo above is intriguing. Does it have enough chlorophyll to survive on its own?