Our ponytail palm is blooming for the first time

In yesterday’s post, “Cutting down the Agave desmettiana flower stalk,” you might have noticed that one of the ponytail palms (Beaucarnea recurvata) next to our Agave desmettiana ‘Variegata’ is in bloom as well. There are actually three of them. For all intents and purposes their caudexes are fused together now; originally they must have been three seedlings growing in close proximity.

Here’s a photo I took from the upstairs loft: 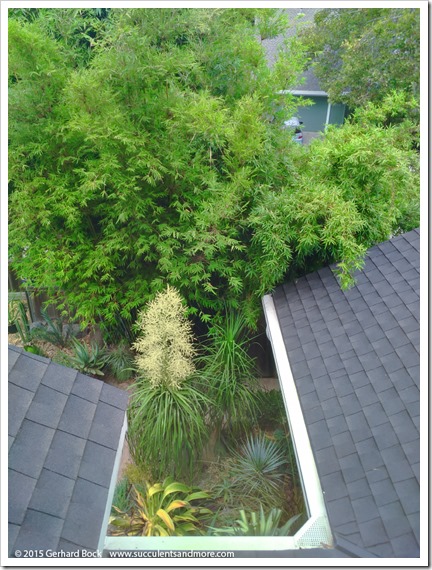 Rewind 6½ years to March 16, 2009. That’s when we planted this bed. I wasn’t writing a blog at that time but fortunately I took pictures. 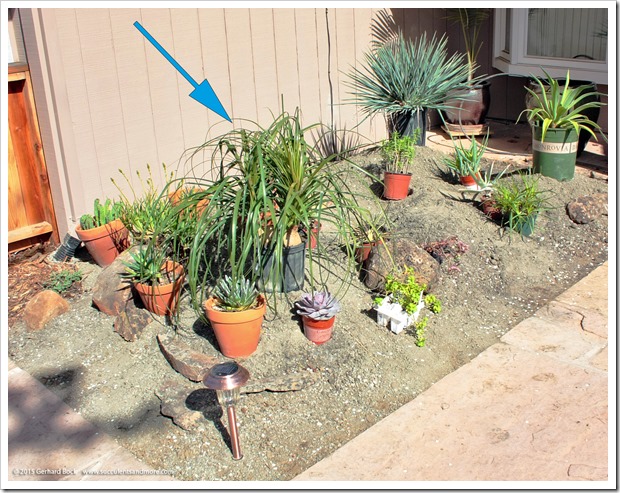 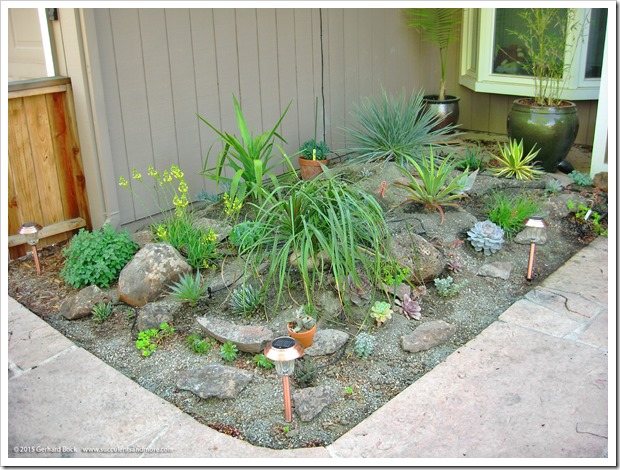 Most of the original plants in this bed have long been replaced, but the ponytail palm triplet has endured even though many people say Beaucarnea recurvata isn’t hardy in our climate. I did cover them when they were smaller but they’ve been on their own the past four years.

When we got back from our Pacific Northwest trip this summer, I noticed that the tallest of the three Beaucarnea recurvata was going to bloom. On July 13, 2015 it looked like this: 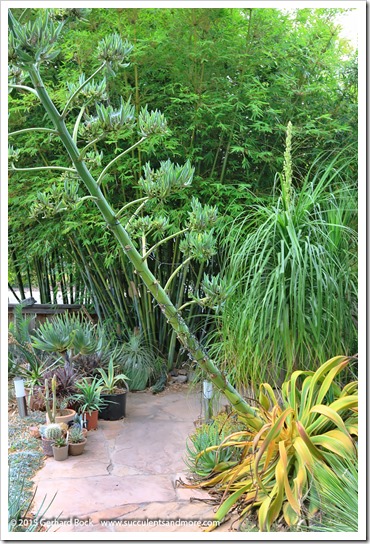 Three weeks later, the inflorescence had reached its full height and the individual flowers were starting to open up: 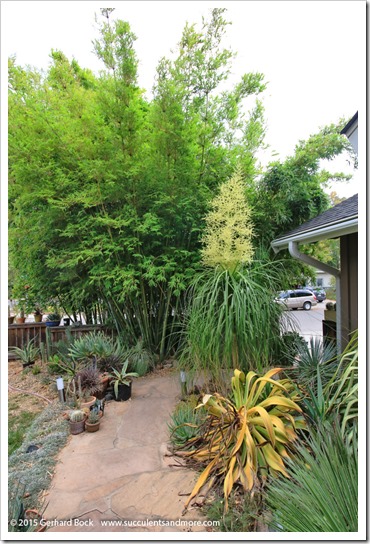 Each flower is tiny and nothing to write home about. But I like the overall effect from a few feet away. Since this is the first time any of our ponytail palms have bloomed, I’m very excited. (To give credit where credit is due, I’m also thrilled that the clumping bamboos in the background are doing as well as they are with only once-a-week soaker hose watering.) 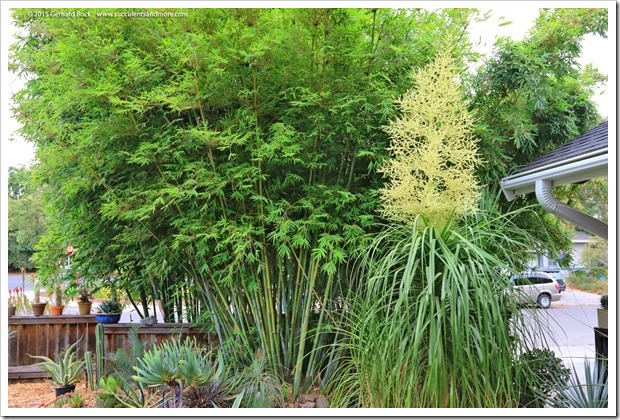 It’s difficult to get a good photo of all three ponytail palms. This is the best I could do: 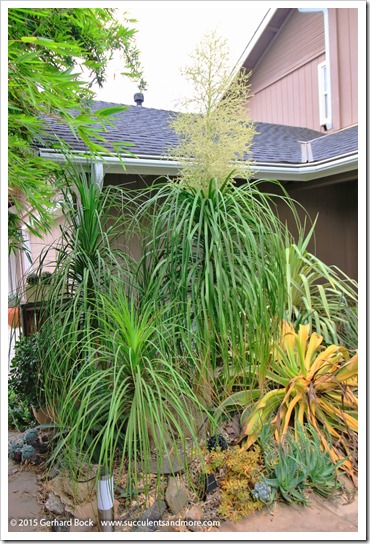 Here is a photo of the caudexes. No surprise, the largest one (on the right) belongs to the plant that is in flower. 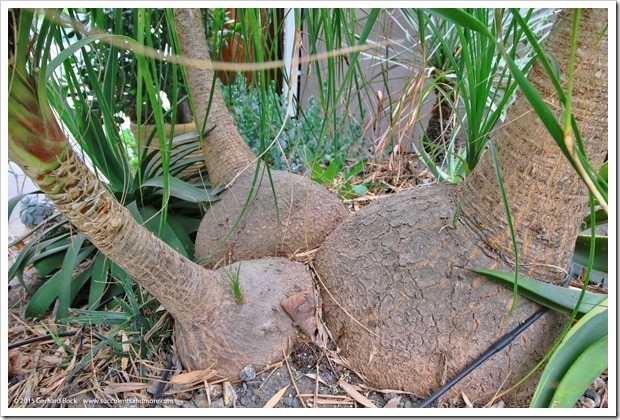 Beaucarnea recurvata is native to eastern Mexico. It’s one of nine species in the genus Beaucarnea, all of which are stem succulents that form a swollen base (the “caudex” mentioned above) where they store water in dry times.

This genus had had a tumultuous life, taxonomically speaking. At one point it was lumped together with the genus Dasylirion, at another point with the genus Nolina, but as of now it is its own entity. The most closely related genus is probably Calibanus, known primarily for Calibanus hookeri, commonly known as “Mexican boulder.” No matter what its ultimate taxonomical classification will be, Beaucarnea recurvata is not a real palm, in spite of its common name.

In the right climate and with regular water, Beaucarnea recurvata can grow into massive trees, with caudexes over 15 feet (!) in diameter. The Huntington in Southern California has some impressive old specimens.

The literature says that only “older” plants flower. I don’t know how “older” is defined; I bought my triplet almost seven years ago at Wal-Mart, of all places. My guess is it’s about nine years old by now. Supposedly flowering plants tend to become ratty, losing many of their leaves. For this reason, some growers remove the flower stalk right away. I’m actually enjoying the flowers so I think I’ll leave the inflorescence for another week before I cut it down. After all, I don’t want my specimen to turn into a mop head.

Considering how large the caudex—the water-storage organ—can get in good times, it’s easy to see that this plant can tolerate considerable drought. Conversely, it can also handle humid and fairly wet conditions, which has contributed to its spread across the subtropics (Florida, Hawaii, Australia and even Africa).

What does limit its distribution are winter temperatures. Small plants are unlikely to survive much below 27°F; older plants might, but will probably lose their leaves. What has helped my Beaucarnea recurvata thrive is the wall of clumping bamboos across the flagstone walkway. They create a microclimate that is just warm enough to prevent severe winter damage. I wish I could say I planned it that way, but it was simply lucky coincidence.

Pony Tail Palms: An Introduction to Beaucarneas (a comprehensive, yet easy-to-understand article written by the indefatigable Geoff Stein, a.k.a. Palm Bob)