I won’t lie, agaves are my favorite group of plants, but aloes are right there near the top. They offer as much variety in size, texture and color as agaves do and many of them flower every year—unlike agaves, which typically flower only once, at the end of their lives (and then promptly die). I particularly like aloes that grow and flower in the winter when little else is in bloom.

The aloe I want to show you today is one of the more unusual ones. Native to northeastern South Africa and Swaziland, its botanical name is Aloe suprafoliata, which means “leaves stacked on top of each other.” The common name in Afrikaans is boekaalwyn, literally “book aloe.” It’s easy to see why: the stacked leaves resemble the pages of an open book. 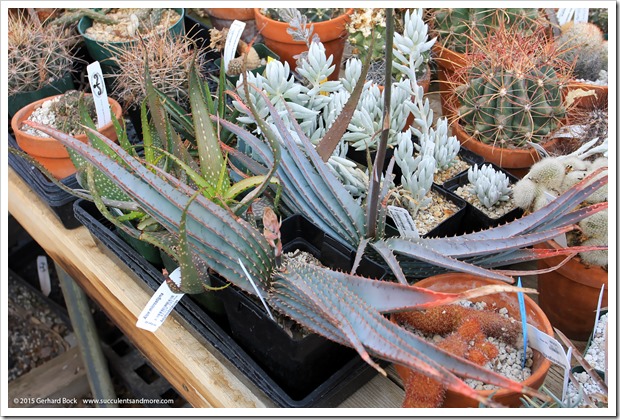 I find this distichous leaf arrangement to be both fascinating and strangely beautiful. 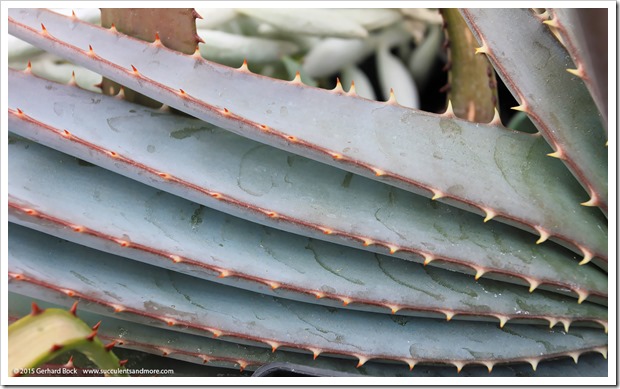 Annie’s Annuals, the cult nursery in Richmond, CA, refers to Aloe suprafoliata as the “mustache aloe,” which is both appropriate and humorous.

The interesting thing about Aloe suprafoliata is that has two faces—or rather, phases. As a youngster, its leaves are arranged in the open-book fashion you saw above. But as it enters adulthood, the leaf arrangement begins to change: 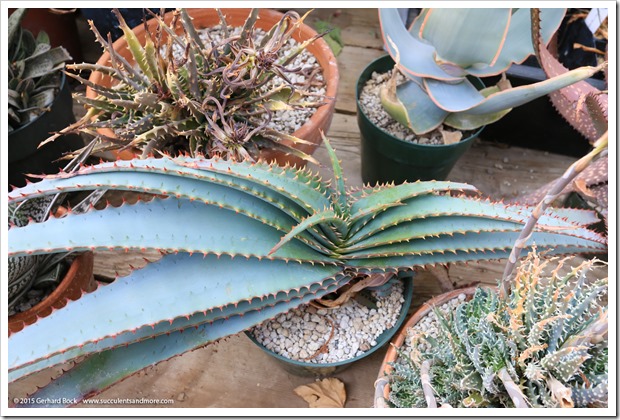 The leaves begin to swivel out and form a classic aloe rosette: 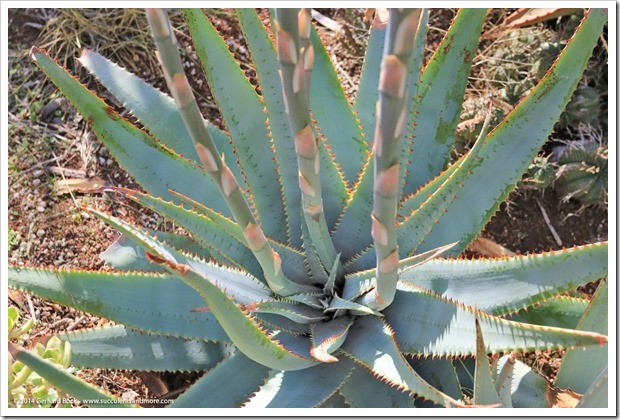 Aloe suprafoliata in the ground on the UC Davis campus 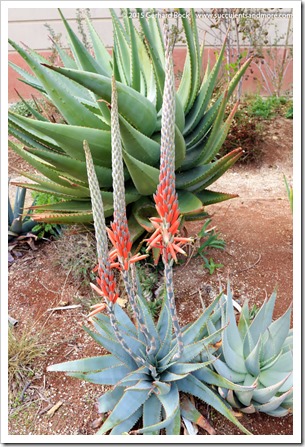 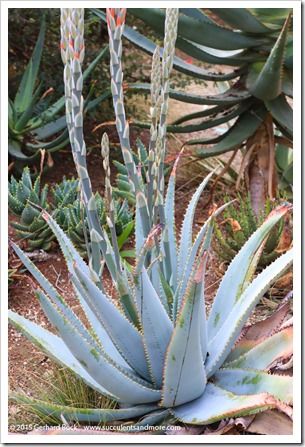 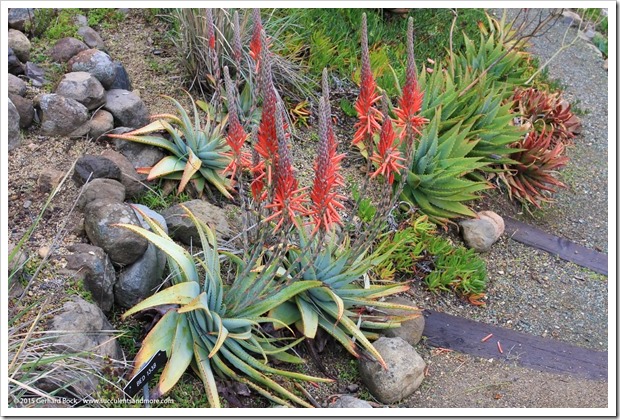 Flowering Aloe suprafoliata at the UC Botanical Garden in Berkeley

Some people lose interest in Aloe suprafoliata at this point because it becomes “conventional,” but I still think it looks good. And the flowers are truly beautiful.

My Aloe suprafoliata came from the UC Davis Botanical Conservatory. It was tiny when I bought it—in a 3-inch pot if I remember correctly—and it has certainly grown: 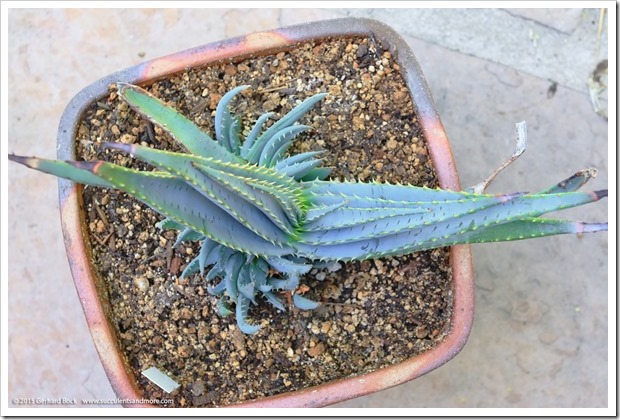 As you can see it’s still in the open-book phase, but one thing is unusual about it: it has lots of pups. Aloe suprafoliata is generally solitary although some clones are known to offset freely. Mine is clearly one of them. More to give away later! 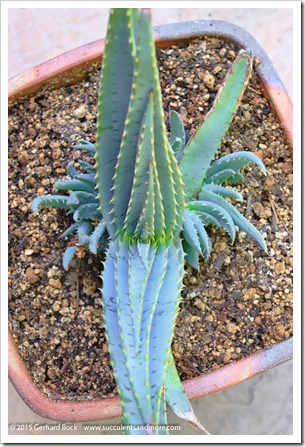 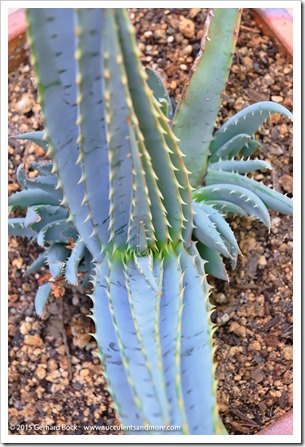 My book aloe is in a pot on the flagstone walkway to the front door and gets a good 6 hours of sun a day. I hand-water it once a week. It’s a nice turquoise but doesn’t have the purple tinge the specimens at the UC Davis Botanical Conservatory had, but I think they get even less water. 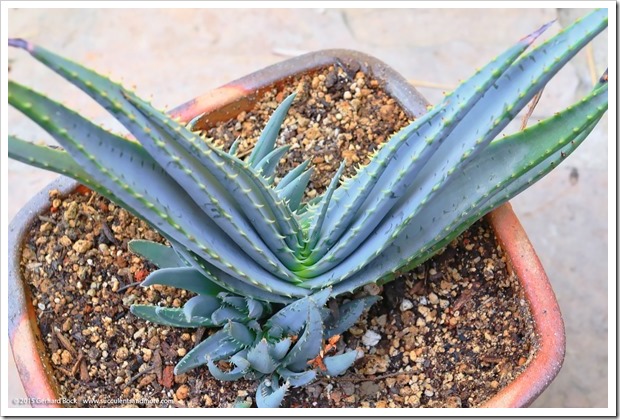 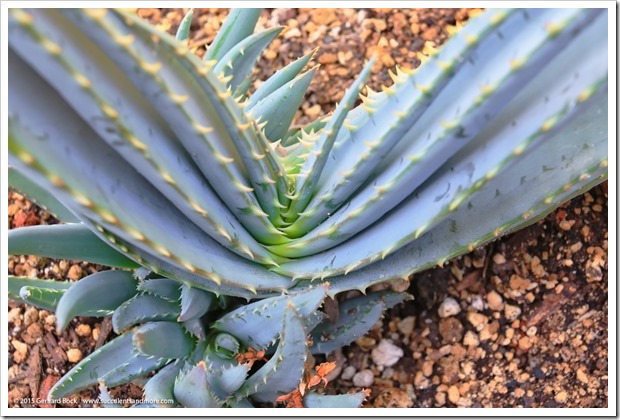 Aloe suprafoliata is hardy to around 25°F, possibly lower if kept dry. That makes it a zone 9b plant.

After we remove the front lawn this fall and replace it with a winter vegetable garden and a succulent mound, I will put my young adult Aloe suprafoliata and its babies (scandalous teenage pregnancy!) in the ground. I’d be happy to detach a few pups at that time if anybody is interested!