Is there a better recipe for lifting yourself out of the summer doldrums than buying a plant? I don’t think so. Here’s my weekend purchase: 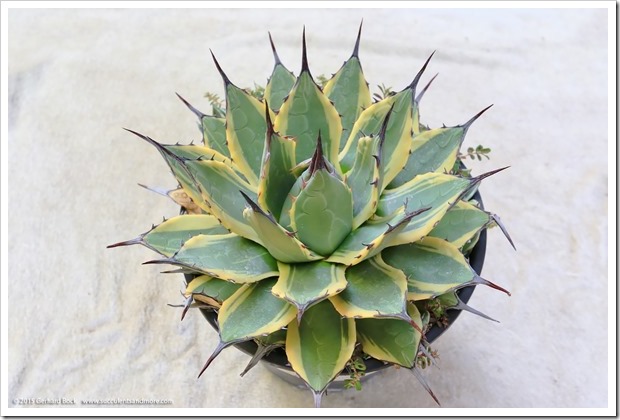 This beauty is the largest Agave ‘Cream Spike’ I’ve ever seen for sale in a nursery. It came in a 2-gallon container and is almost 11 inches across—a clear contradiction of the label which gives a height of 5 inches and a width of 6 inches: 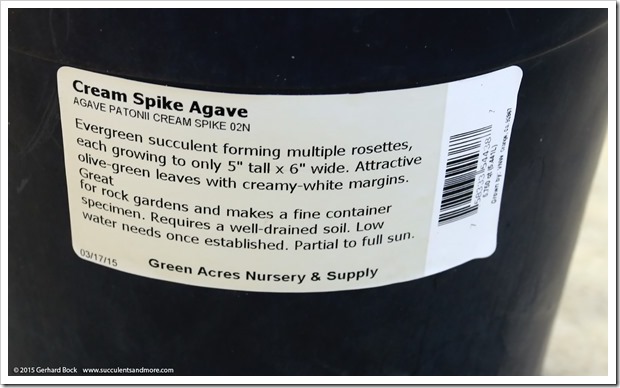 The label indicates that the grower is Village Nurseries in Orange, CA

The mother plant wasn’t the only thing growing in that pot: 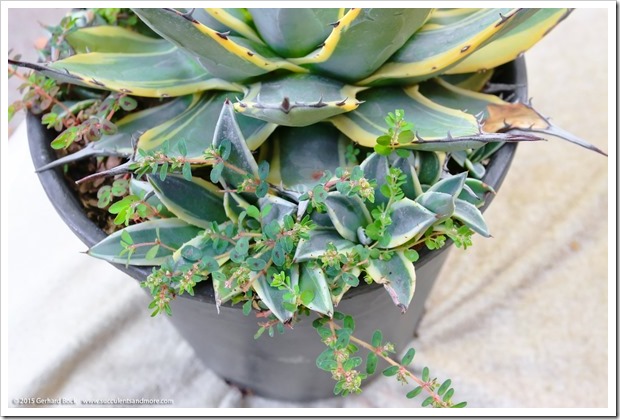 Pups and spotted spurge (Euphorbia maculata) along for the ride

I specifically bought this agave for the succulent mound I’m going to create when we take out the front lawn this fall. It’ll be one of maybe a dozen agaves I want to plant out, together with a few cacti and assorted other succulents.

‘Cream Spike’ is not exactly rare, and many of you might have it in your collection. As a youngster, it forms an almost flat rosette, like this: 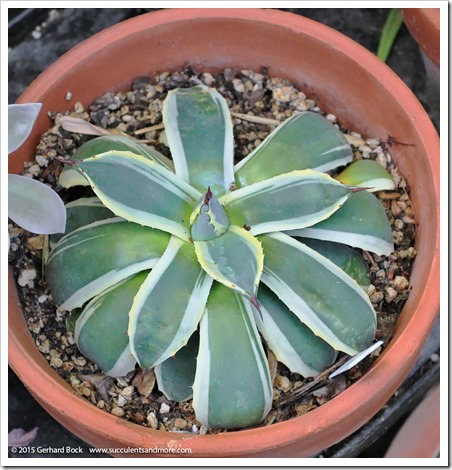 Although slow-growing, juvenile specimens produce a lot of offsets (like here), probably the main reason why this cultivar is so widely available.

As it matures, the rosette begins to round out, with leaves curving up instead of down. Offset production is said to decrease at the same time. There is little information about the ultimate size of this cultivar, especially since it hasn’t typically been used as a landscape plant. In this book Agaves: Living Sculptures for Landscapes and Containers, Greg Starr says that the largest specimens he is aware of are 12-15 inches tall by 20-24 inches wide. This would make it a great agave for smaller gardens. Hardiness seems to be at least down to the high teens (-7 to -8°C), which would make it zone 8b.

But let’s leave taxonomy behind and get back to the ‘Cream Spike’ I bought at Green Acres in Elk Grove, CA on Saturday. I decided to remove both the weeds and the pups, replant the mother plant in its own 5-gallon container until it’s ready to go in the ground, and put each pup in its own pot.

Step 1 was to cut off the plastic pot. As is often the case with agaves that have a lot of offsets, the plant was stuck and wouldn’t come out of the container. I made one shallow cut through the plastic (fortunately without severing any major roots) and lifted the plastic pot right off. 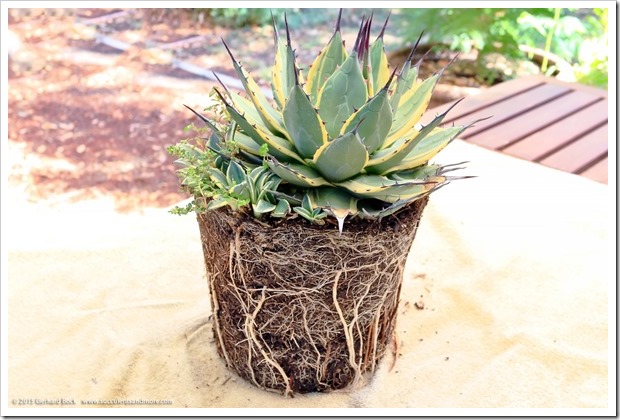 As you can see, the roots looked great. In addition, there were more pups than I had initially thought: 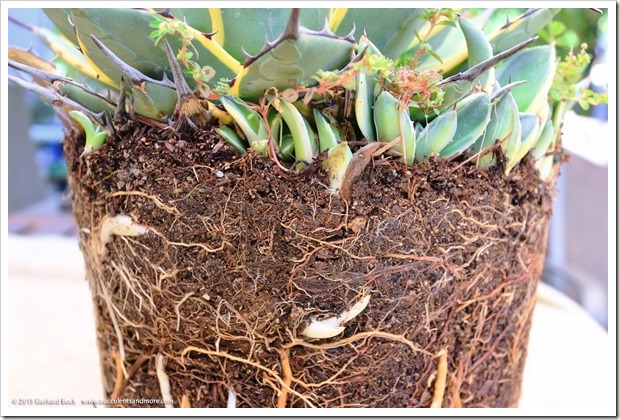 I mangled a few tiny pups as I was pulling them off, but  I still ended up with 13 viable offsets: 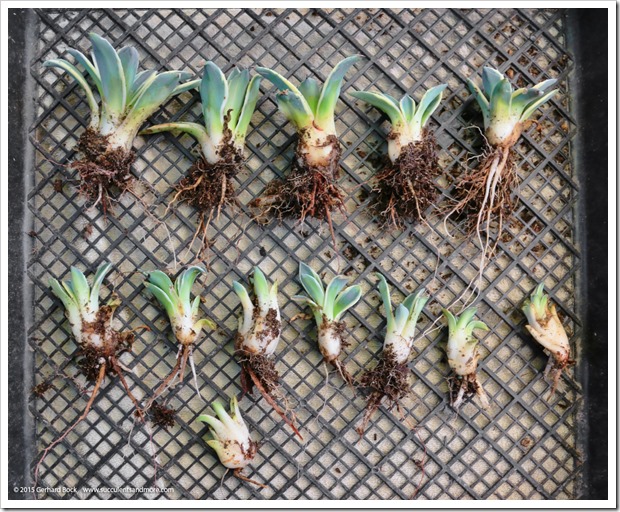 Here is the mother and her separated babies: 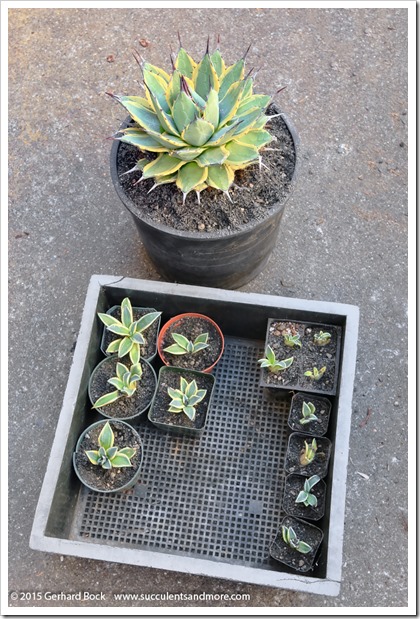 And a few beauty shots of the mother: 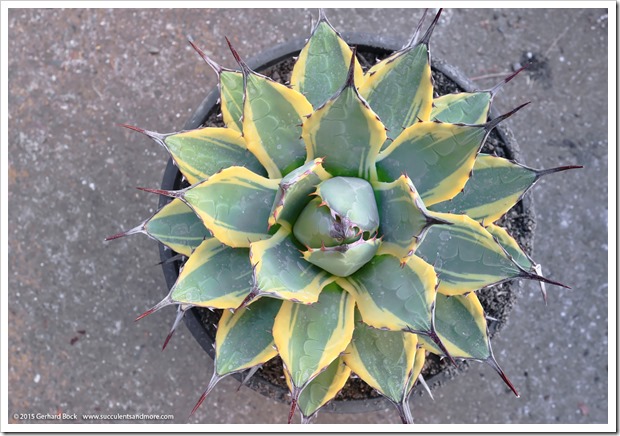 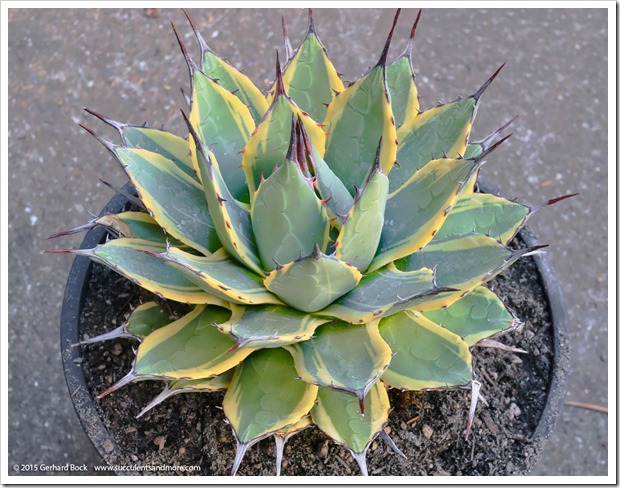 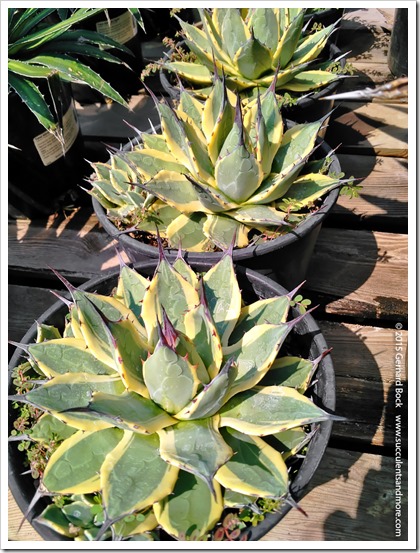