Instead of cut flowers, this is what I gave my wife for Valentine’s Day: 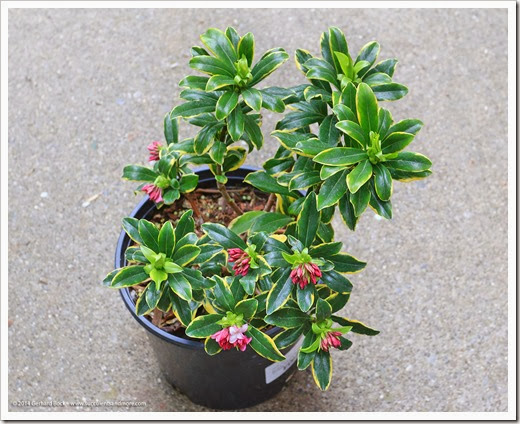 A wonderfully fragrant daphne with particularly striking variegation. This relatively recent introduction is called ‘Maejima’. The cream-colored leaf margins are wider than in the more common Daphne odora ‘Aureomarginata’, and it supposedly is a bit easier to grow as well. 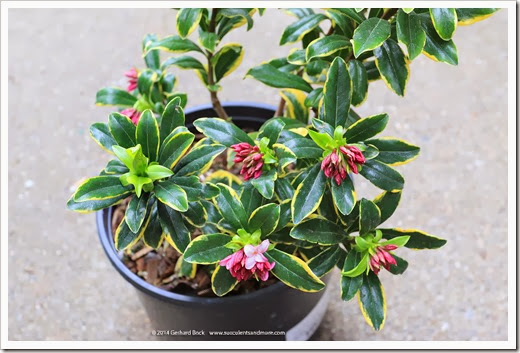 Green Acres Nursery in Sacramento had dozens of ‘Maejima’ in three sizes: 1 gallon (next photo), 2 gallon (which is what I bought)… 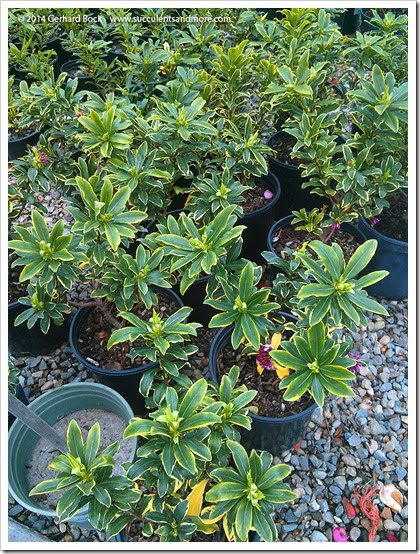 …and 7 gallon—it had the best variegation but at $65 was too rich for my budget. 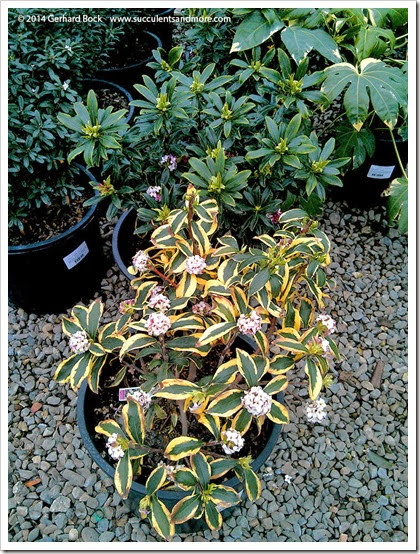 I’m hoping that the 2-gallon plant I bought will develop the wider leaf margins over time.

This is the third Daphne odora I’ve bought since we moved into our current house 16 years ago. I don’t remember much about the first one, it died so quickly. The second one hung on for a good five years, even flowering in its first three years, but then it died as well.

If you’ve ever had a daphne, you know how prone they are to sudden decline and death. People call this the “daphne death spiral.” I did a bit of research and it turns out that daphnes have very specific soil requirements. The pH isn’t critical (although they do prefer a slightly alkaline pH), but drainage is. The soil has to be porous and free-draining. Daphnes do not tolerate water-logged soils. If anything, they prefer the soil to dry out slightly between watering. Our first two daphnes were planted in the ground in relatively heavy soil where I believe they received too much water from the sprinklers. In addition, the spot where they were located was too shady.

Which brings me to the the second issue: sun exposure. Too much shade leads to floppy growth, anemic flowering and poor health in general. Too much sun fries the plant, especially in our climate. A northern exposure would be best—bright light but no direct sun—but an eastern exposure—morning sun—should be OK as well.

To give our new daphne all that, I decided to grow it in a pot instead of in the ground. This allows me to custom-mix the soil (2 parts commercial potting soil to1 part pumice) and to move it around as needed: close to the back yard slider in the winter when it’s in bloom so we can enjoy its heady fragrance, and tucked away on the northern side of the house in the summer.

At least that’s the plan. I’ll let you know how it goes. But even if dies prematurely, it will have lasted longer than a bouquet of cut flowers or a box of chocolates—or whatever else people give for Valentine’s Day.

A word on roots: Daphnes have a very delicate root system with relatively few fibrous roots. When planting in the ground, be sure you pick the right spot the first time around; chances are your daphne will not survive a move.

Before transplanting a potted plant, water it thoroughly so the root ball stays together. When you remove the plant from the pot, go slowly and support the root ball with your hands so it doesn’t fall apart. Fortunately, daphnes are slow growers so you shouldn’t have to repot it often.