Getting ready for the big chill

Towards the middle of next week our stunning fall weather (low 70’s today) will come to a screeching halt as a cold front from Alaska will sweep down into Northern California. The different weather providers can’t seem to agree just how bad it will be; the most optimistic is forecasting lows around 30°F, the most pessimistic a low of 23°F (!) on Thursday, December 5. Normally I wouldn’t worry quite yet but since I’m leaving tomorrow morning for Arizona, I needed to take precautions today.

In a hectic two-hour period, my wife and I draped holiday lights over plants and then covered them with frost cloth and, after we’d run out of frost cloth, old sheets. Ideally, I would have liked some more time, but it is what is.

Here are some before and after photos: 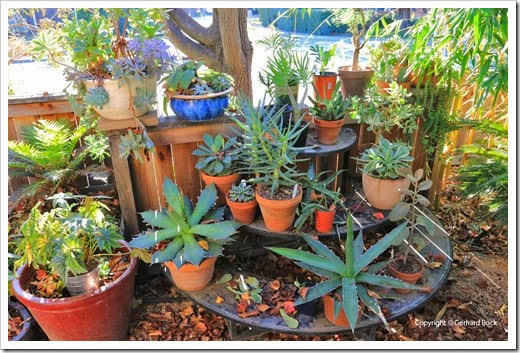 Succulent table next to front porch 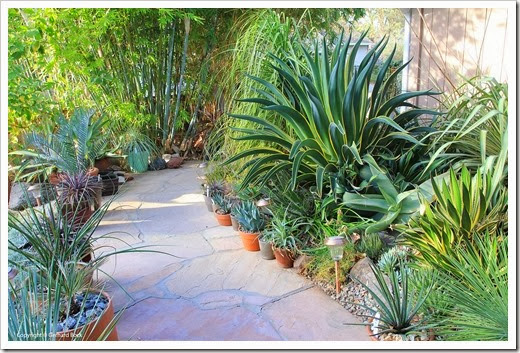 Succulents by the front door 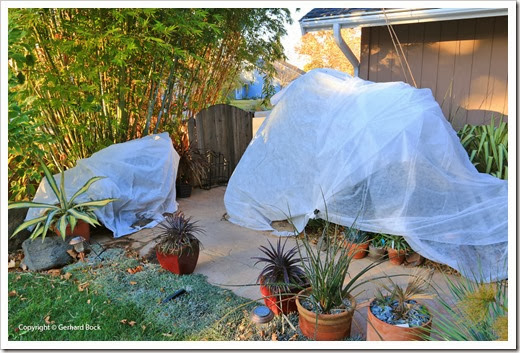 Same area with frost cloth (the large Agave desmettiana ‘Variegata’ on the right is draped with holiday lights). The potted plants that remain uncovered are fully hardy. 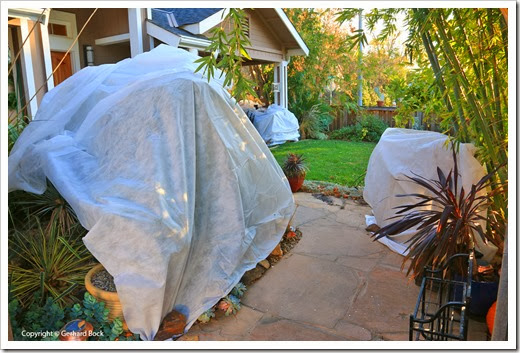 View from the driveway 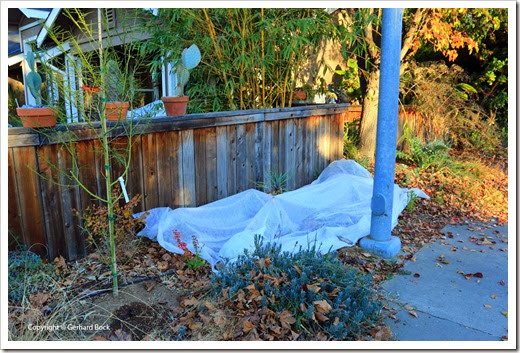 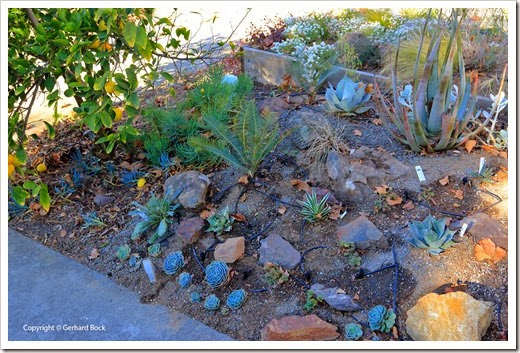 Renovated succulent bed along the driveway 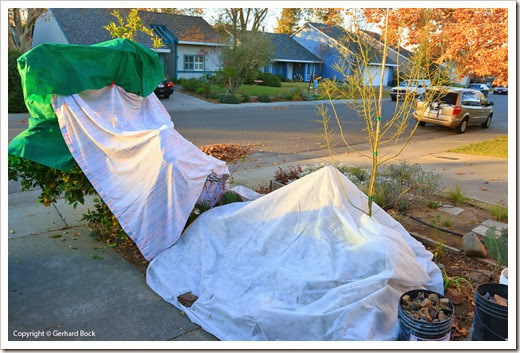 Same with frost cloth. The palo verde (Parkisonia ‘Desert Museum’) is still poking out (it’s hardy to 15°F), but the Bearss lime tree at the foot of the bed is mostly covered (and strung with C9 holiday lights for extra warmth). It’s impossible to fully cover a tree this size, but a makeshift cover like this has been enough in the past to prevent frost damage. 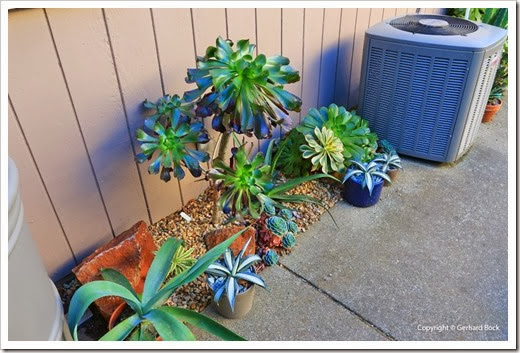 Left-side portion of the aeonium bed in the backyard. 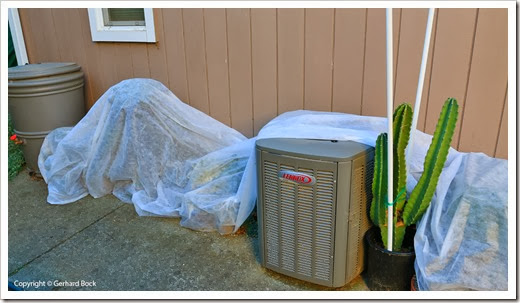 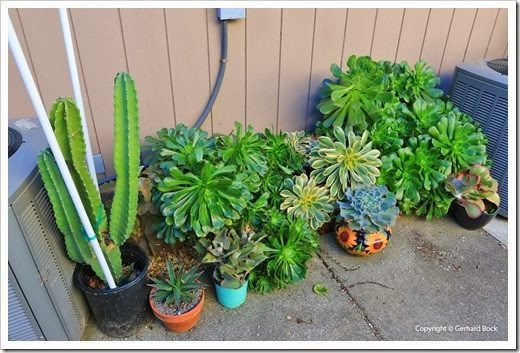 Right-side portion of the aeonium bed in the backyard. 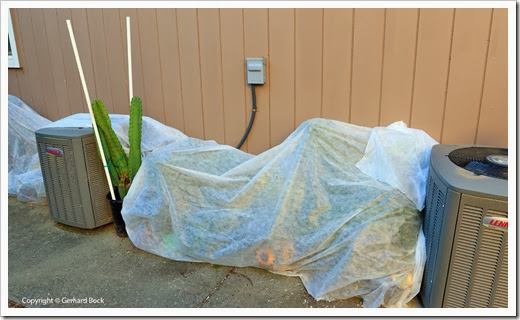 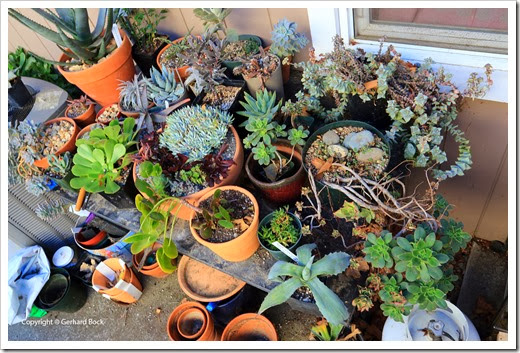 Plant table to right of the aeonium bed. I filled it with plants… 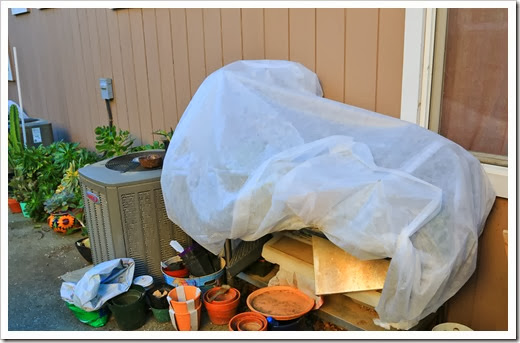 …and then tucked them in nice and snug. 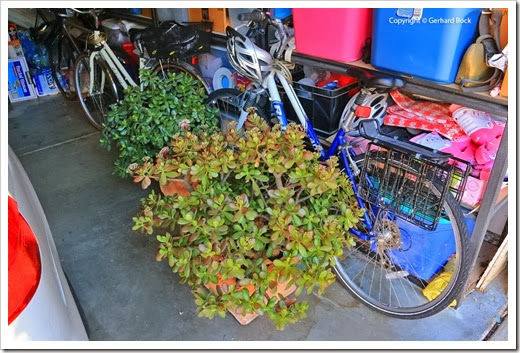 We have two potted jade plants (Crassula ovata) to the right and to the left of the driveway. Instead of covering them, we simply moved them into the garage. They’ll sit in the dark for a week, but that’s still better than freezing their patooties off. 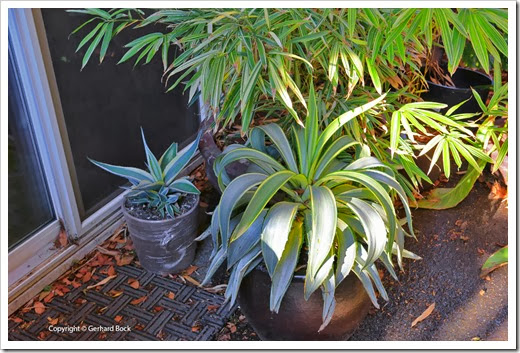 Agave guiengola ‘Crème Brûlée’ and Agave ‘Joe Hoak’. I moved these two frost-sensitive agaves against the family room slider. My wife will throw a sheet on them as needed. 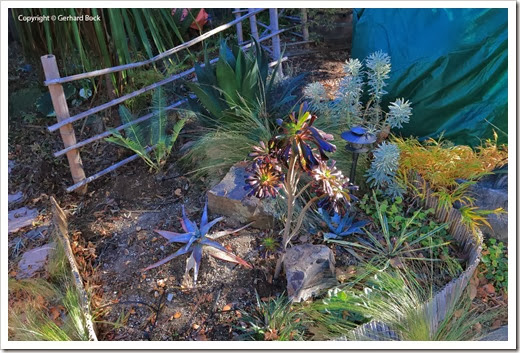 Aloe capitata var. quartziticola and Aeonium ‘Zwartkop’. These two should ideally be covered but I’d run out of frost cloth and sheets by the time I got to them. They’re in a fairly protected spot in the backyard and should be OK unless it gets really cold. I don’t think I covered this Aeonium ‘Zwartkop’ last winter and it lived through several nights of 26°F. Leucadendron ‘Safari Sunset’ and tower of jewels (Echium wildpretii) outside the front yard fence. There’s another Echium wildpretii about 10 feet to the right, not to mention my beloved Leucadendron ‘Jester’. For now, these remain uncovered—I’m hoping the fairly dense plantings will help protect them, but I will be concerned should nighttime lows approach the mid-20s. If the forecast gets really dire, I’m sure I’ll call my wife with an urgent request to cover them.

I’m hoping that we have prepared for a worst-case scenario that won’t materialize, but you never know what our friends in Alaska will be sending our way. No matter what will happen here, we won’t be hit as hard as our friends in the Pacific Northwest where nighttime lows may drop into the low 20s.