Molokini is a small horseshoe-shaped “island” off the coast of South Maui. Geologically, it’s a partially submerged volcanic crater that acted as a relief vent for Haleakalā, the 10,023 ft. dormant volcano that dominates the topography of Maui. Today, Molokini is Maui’s premier spot for snorkeling and diving. The sheltered crescent offers protection from the powerful currents and allows you to view the marine life up close. 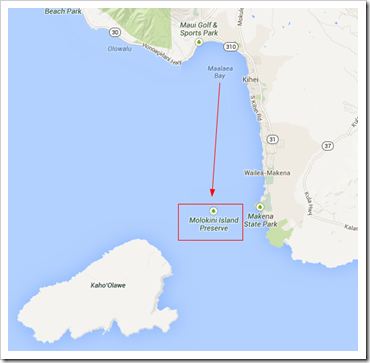 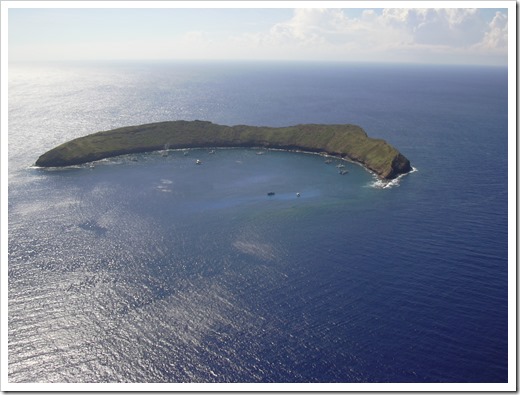 Molokini from the air (source: Wikipedia)

This morning we took a snorkeling excursion to Molokini on board the Four Winds II, a 55-foot power catamaran large enough to hold 130+ people. The boat left from Māʻalaea harbor, halfway between Wailea and Lāhainā. 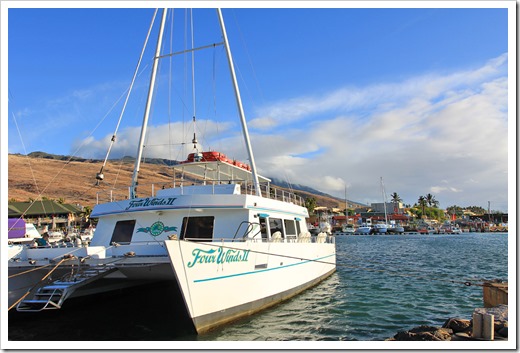 The trip to Molokini took about an hour. The views from the water were astounding. Smoke from a controlled burn in one of the immense sugar cane fields near Kalahui added an otherworldly element to the eastern sky. 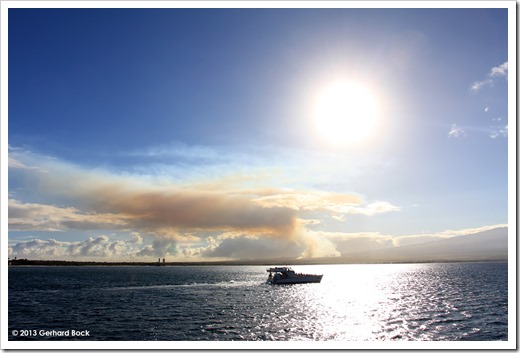 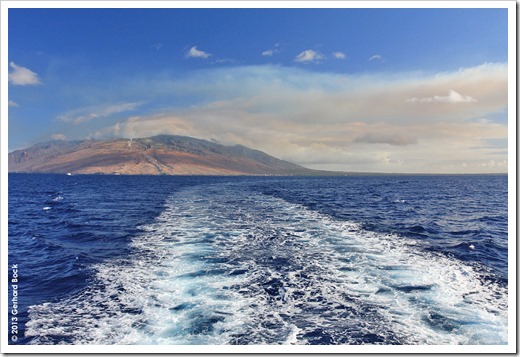 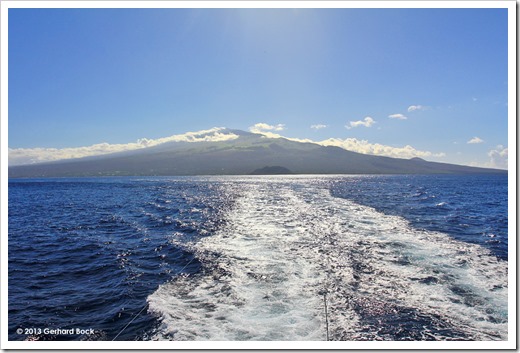 During the trip, the crew set up fishing lines… 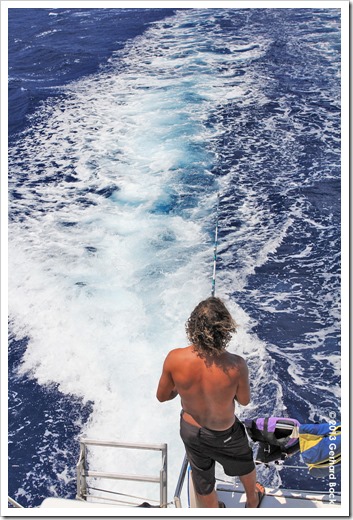 …and grilled the food for lunch (no barbecuing is allowed within the Molokini marine sanctuary). 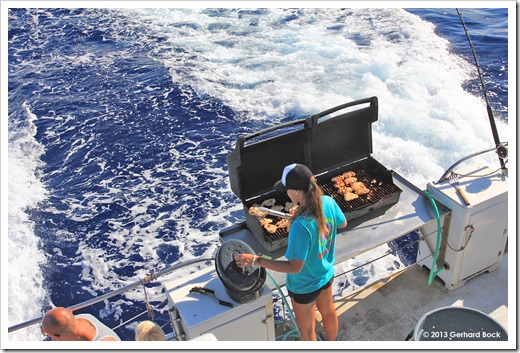 Finally we arrived at Molokini. Half a dozen other excursion boats were already moored in the crater. Clearly this is a popular spot!

Molokini itself is off limits to visitors. As you can see from the next photo, it would be virtually impossible to go onshore anyway. 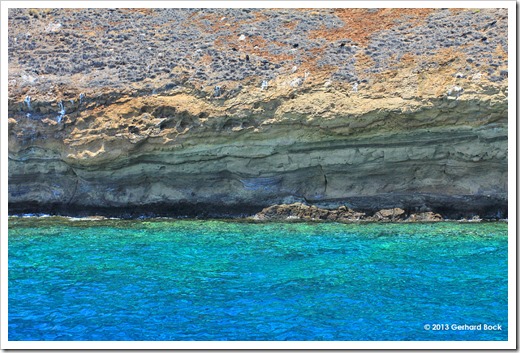 The next two hours were spent snorkeling. This was my first time and I didn’t know what to expect. The crew gave us basic instructions and ensured us that snorkeling isn’t rocked science, which turned out to be true. Still, I spent the first half hour getting used to wearing a mask and breathing through my mouth instead of my nose. I will admit that I inhaled more a mouthful of salt water before I got things worked out.

I had rented an underwater digital camera onboard and I ended up taking over 100 photos. However, half of them were blurry (it’s not like you can hold still underwater while taking a photo). Below are the best ones. Since the camera didn’t have a flash, there’s a pronounced blue cast (which is what things look like underwater). I wasn’t able to get a good photo of the fish that swam by; they refused to stop and pose for a picture. But the sea urchins, both black and red kinds, made good subjects since they were attached to the ocean floor. 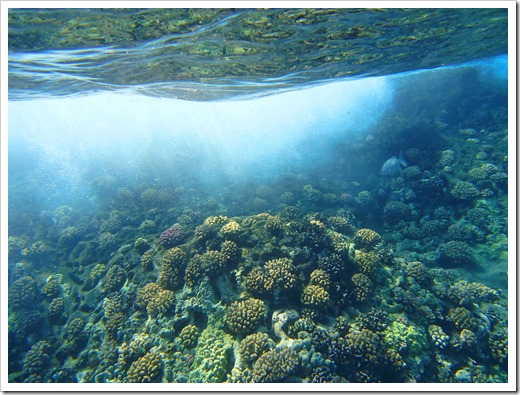 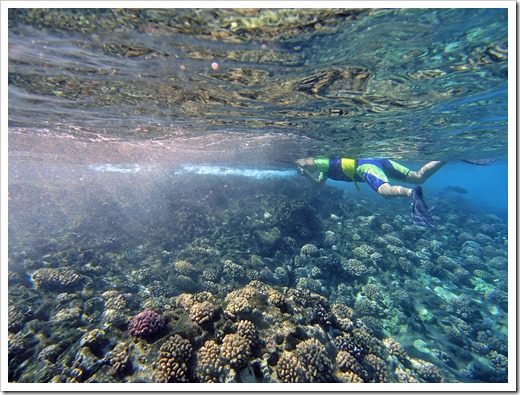 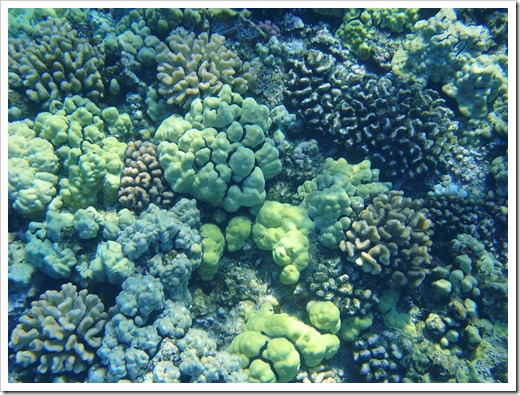 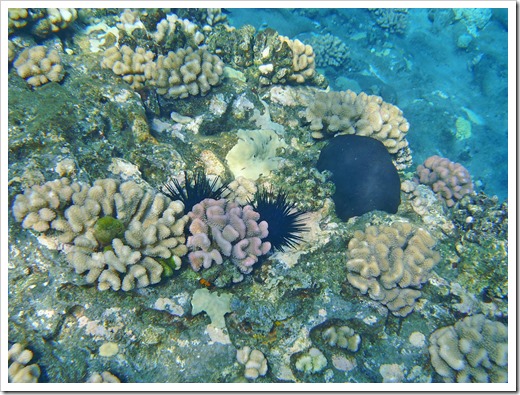 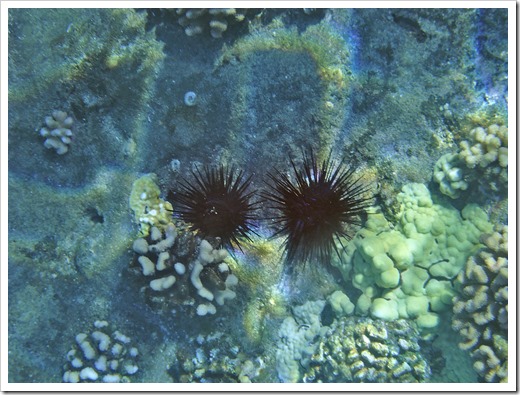 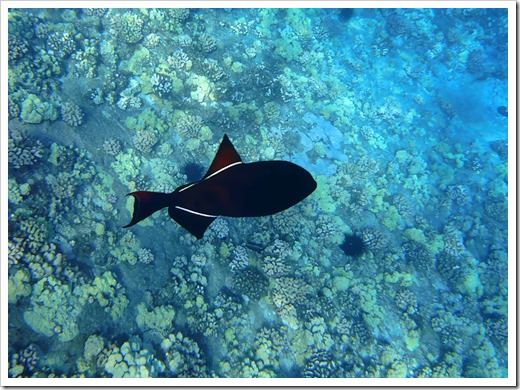 I couldn't believe how ravenous I was when I got out the water. The lunch line was open (grilled burgers—both meat and veggie—chicken breasts and hot dogs) as was the bar (unlimited soft drinks as well as beer and wine). More than a few fellow passengers availed themselves very generously of the free alcohol. I hope they didn’t end up driving after we got back on land. 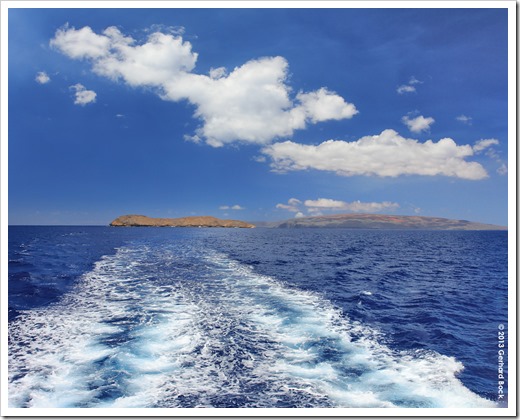 The color of the water was a dark indigo. I had never seen the ocean look like this before.

On our way back to Māʻalaea harbor, we made a 15-minute stop in what the captain called “Turtle Universe.” At first, we didn’t see anything, but eventually we spotted a good dozen Hawaiian green sea turtles (Chelonia mydas). While their carapace is brown, their fatty issue apparently is green because their diet consists of phytoplankton. Adults can weigh in excess of 400 lbs., measure up to 5 ft. in length and live up to 120 years. 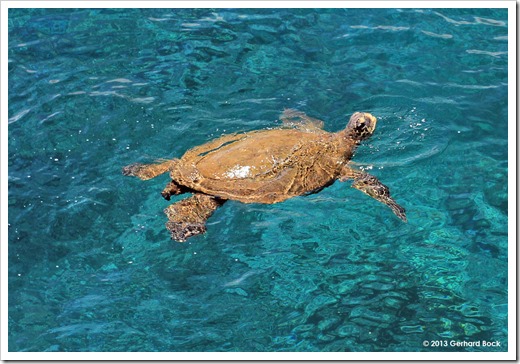 Seeing these sea turtles up close was an unforgettable highlight. 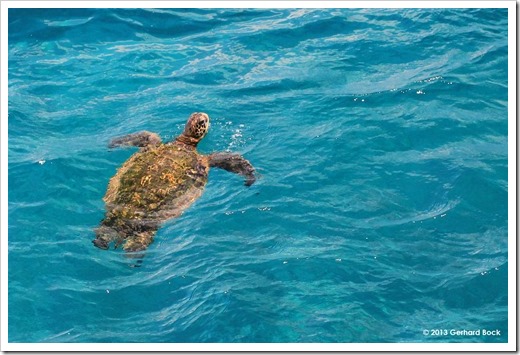 I must admit that by the time we got back to Māʻalaea, I was pooped. I hadn’t realized how much of a workout I’d gotten in the water. I ended up taking a long nap at our condo and even afterwards I felt too sluggish to do much else. I had intended on exploring another beach in South Maui but that will have to wait until tomorrow. For today I’ll leave you with one last photo taken from the harbor in Māʻalaea. The turquoise water (photographed through a polarizer) was unbelievable! 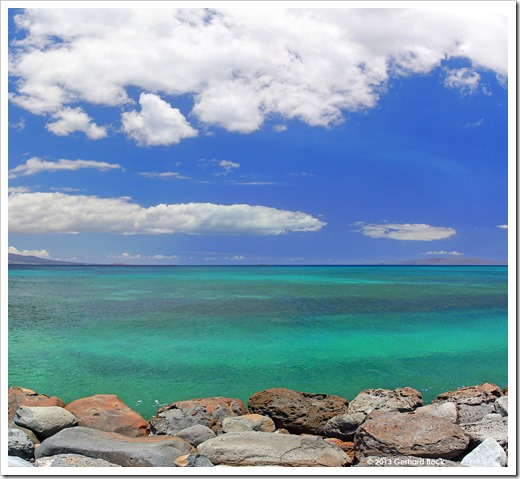 I just realized that this is the first Maui post that doesn’t feature a single plant. I promise, I will make an effort to find more plants to photograph for tomorrow’s post!