This morning we checked out the northern section of Poʻolenalena Beach, away from the Makena Surf Resort. While there were people on the beach, it certainly didn’t feel crowded. Another slice of paradise! 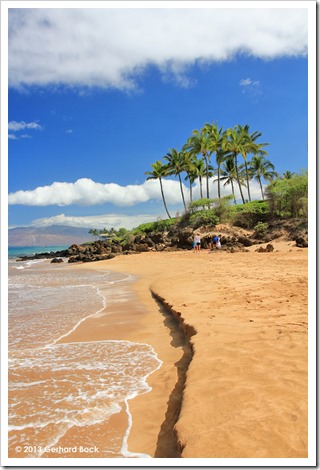 After our beach outing, we drove to Kahului, Maui’s main town, to do some last-minute souvenir shopping at Costco. (Yes, Kahului has a Costco, and it’s the cheapest place on the entire island for just about everything, including gas.) 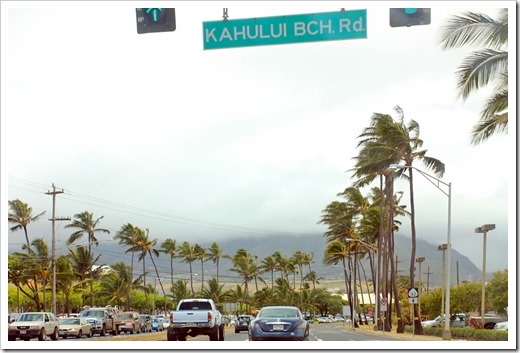 Driving in Kahului—I love the streets lined with coconut palms

I opted out of the Costco trip and asked to be dropped off at the Maui Nui Botanical Gardens. Located next to the University of Hawaii Maui College (UHMC), Maui Nui Botanical Gardens showcases plants either native to Maui or brought here by early Polynesian settlers. This approach is different from the three private botanical gardens I’ve visited on this trip (Garden of Eden on the Hāna Highway, Tropical Gardens of Maui in Wailuku and Kula Botanical Garden in Kula); they focus on exotic plants from all over the world that thrive in Maui’s climate. 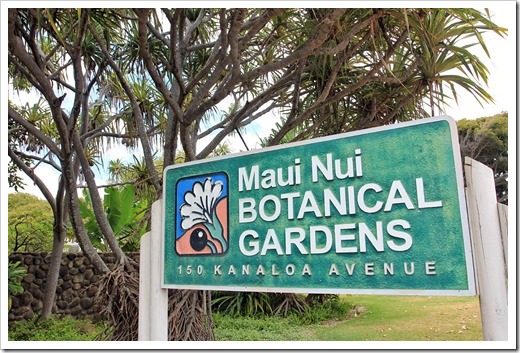 I’ll have a separate post about the Maui Nui Botanical Gardens after I get back to the mainland. Here are just a few highlights I saw today: 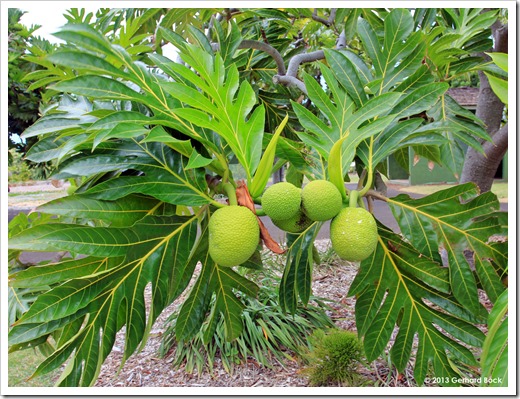 Breadfruit (Artocarpus altilis), easily one of the most beautiful trees I’ve ever seen 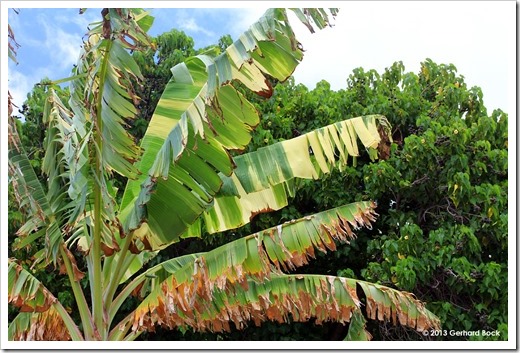 Variegated banana (Musa x paradisiaca ‘Variegata’), rare and sought after; I wish I could have seen the leaves before they were torn to shreds by the wind 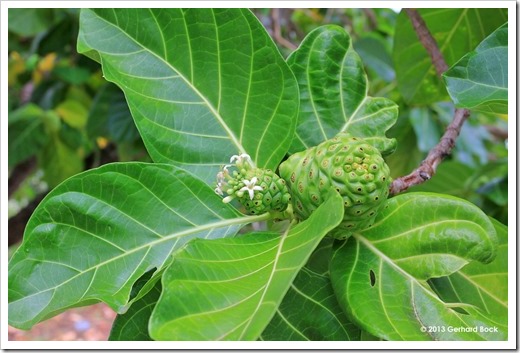 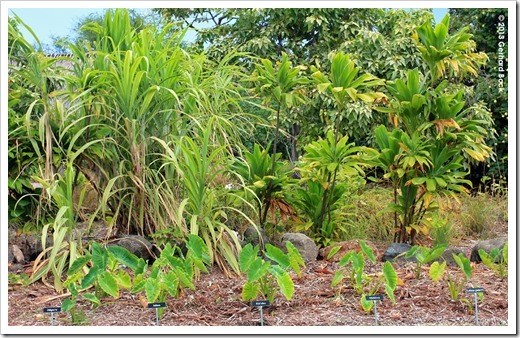 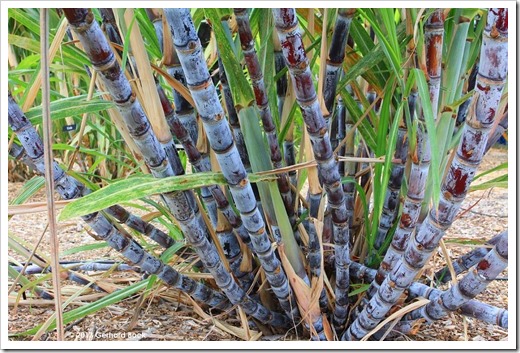 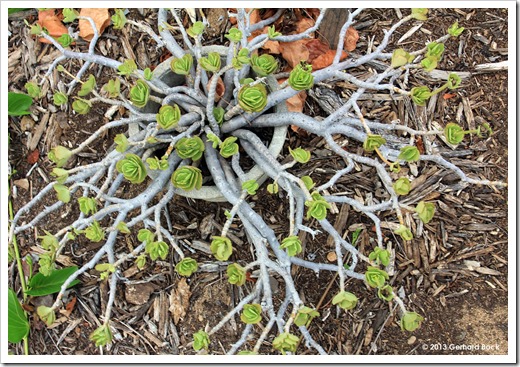 To end the day, my wife and I drove to La Perouse Bay at the southern tip of Maui. It literally is at the end of the only road in this area; figuratively, it might as well be on a different planet. 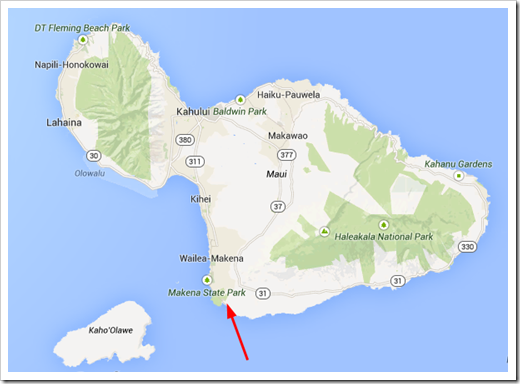 As you leave the Wailea resorts behind, the road narrows and becomes a residential neighborhood of multi-million dollar estates nestled among lush landscaping coaxed from the fertile volcanic soil with plenty of piped-in water. No, this is not what you would find here naturally, but it’s still a slice of paradise, no matter how artificial it might be.

The shoreline here is pure rock, but not just any ordinary rock—lava rock. 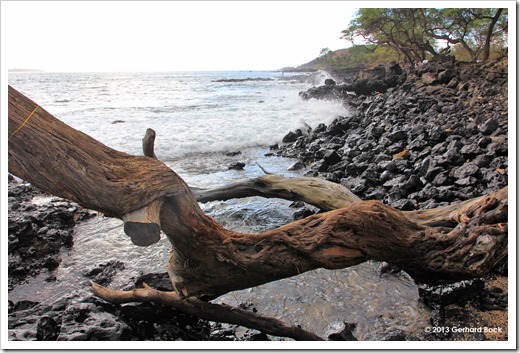 As you get closer to La Perouse Bay at the end of the road, you drive through barren expanses that look like freshly tilled fields. Except that what you’re seeing aren’t clumps of newly turned soil, but chunks of lava rock. These are the visible remnants of Maui’s last volcanic eruption from 1789. 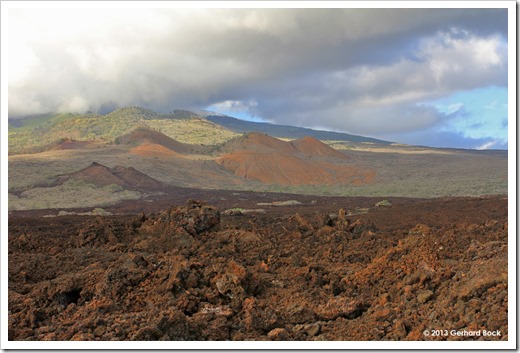 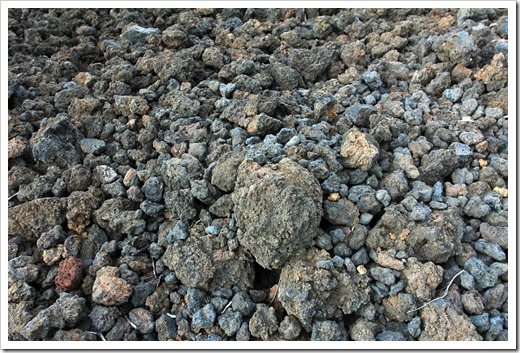 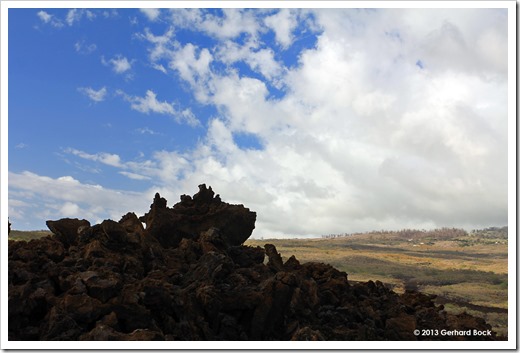 The road ends right at La Perouse Bay, which from the looks of it might as well be in Iceland—or on Mars if Mars had oceans. 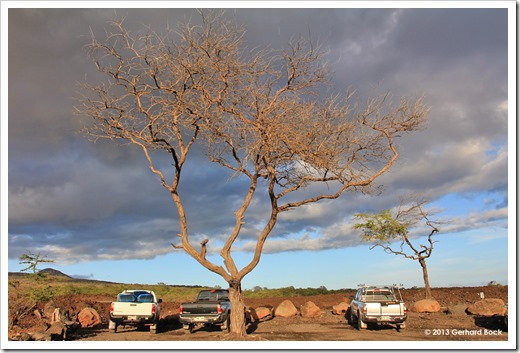 La Perouse Bay parking lot; as you can see from the cars, most people who come here are locals 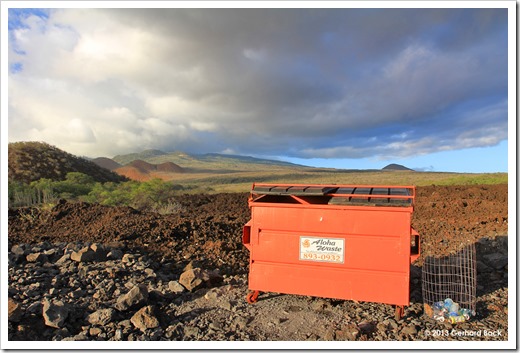 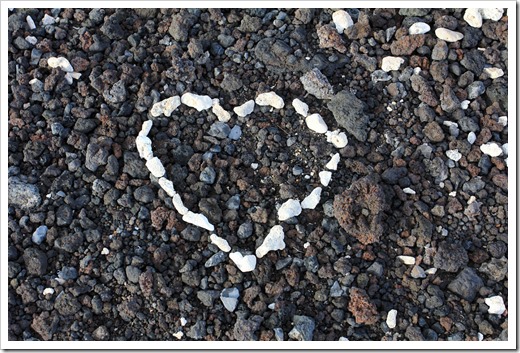 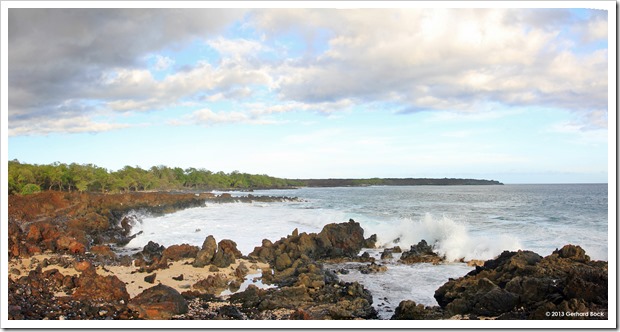 As we arrived, it started to sprinkle, which added an even more mysterious ambience to this otherworldly landscape. 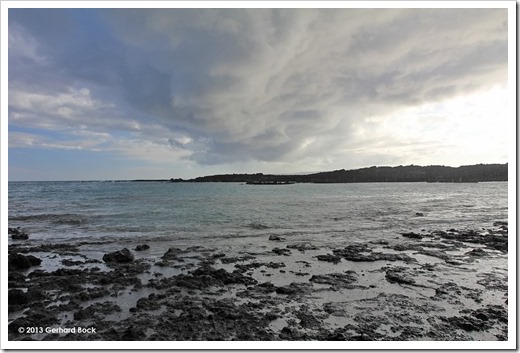 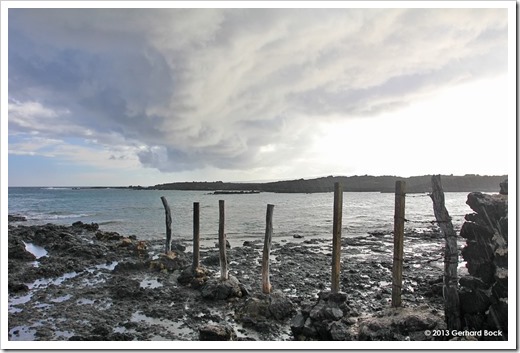 From the parking lot there’s a primitive lava rock trail that follows the shoreline and affords fantastic views of the waves crashing against the black rocks. The scenery is unlike anything else I’ve seen on Maui—or anywhere else. 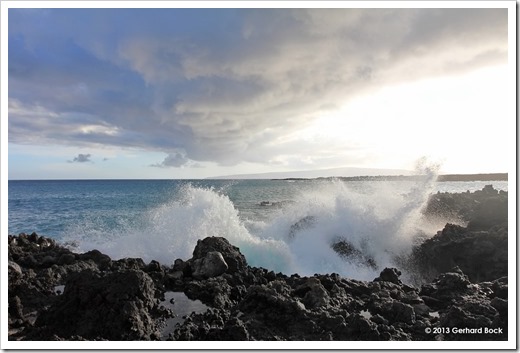 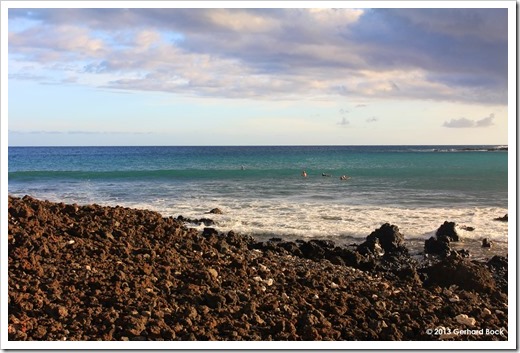 Near where we had parked our car I noticed a bunch of agave flower spikes. They belonged to sisal agaves (Agave sisilana). Agave sisilana was introduced to Maui in the 1800s as a source of fiber for rope. For reasons lost in history, Agave sisilana never took off, but there are isolated pockets of it all over the island. 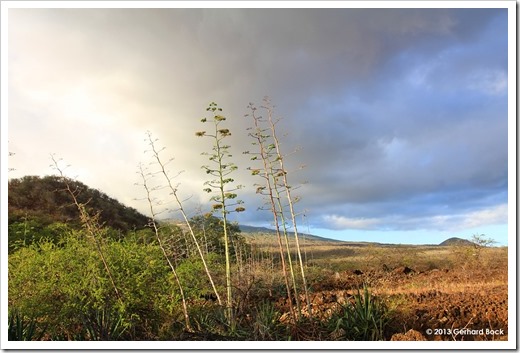 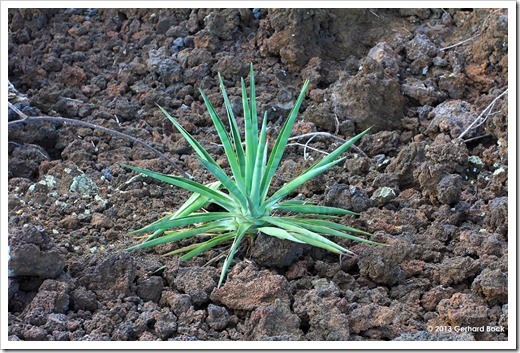 I also spotted rock walls covered with Hylocereus cactus (see this post). The flower buds are just a few days away from opening up. Unfortunately, we won’t be here to see them in all their glory. 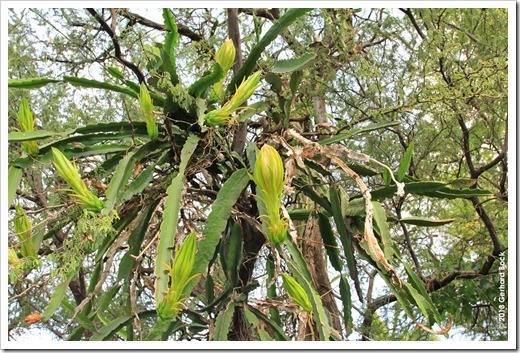 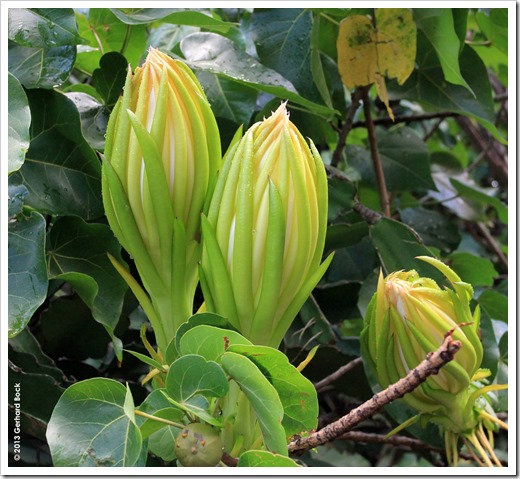 Here are a few more photos from our drive back. We have seen so many different things on this trip, but La Perouse Bay was my favorite spot in terms of raw scenic beauty. 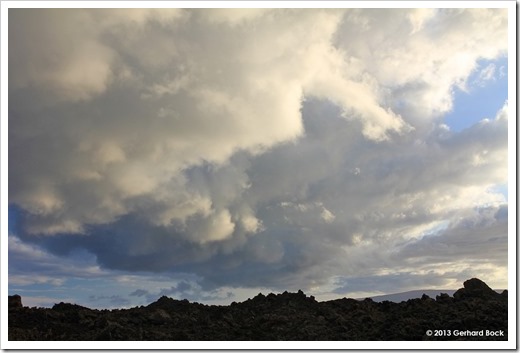 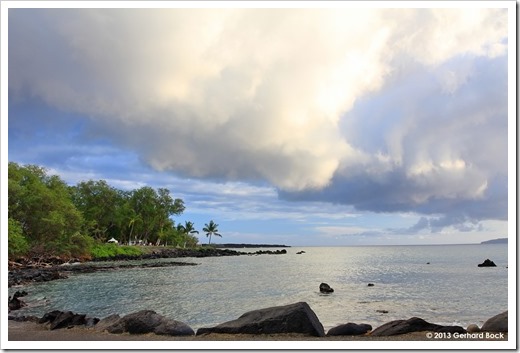 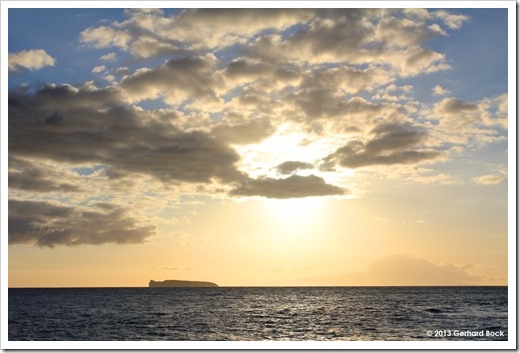