When I woke up this morning, I was surprised to realize that it’s Sunday. Amazing how you lose track of time when you’re on vacation. But that’s also one of the greatest gifts of being away from your everyday routine.

Today we explored Lāhainā and Kāʻanapali, the main towns in West Maui. Here is a map for orientation (how I love Google Maps): 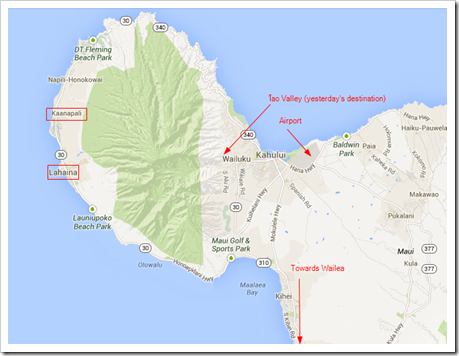 To me, the name Lāhainā embodies all things exotic. There’s such a wonderful ring to it: Lah-HIGH-nuh. I think of the South Seas, palm trees swaying in the breeze, beautiful people enjoying every minute of every day. A Paul Gauguin painting come to life.

Of course reality was (and is) quite different. For starters, Lāhainā means “cruel sun” in Hawaiian. We got here at 9 a.m. and temperatures were in the low 80s, but apparently it can be very hot here on a summer afternoon. In addition, Lāhainā was a major whaling port, which I imagine brought a pretty rough crowd. Conflicts with the resident missionaries (see below) must have been commonplace.

Among the things that haven’t changed: The stunning color of the water, and the view of the neighboring island of Lānaʻi. 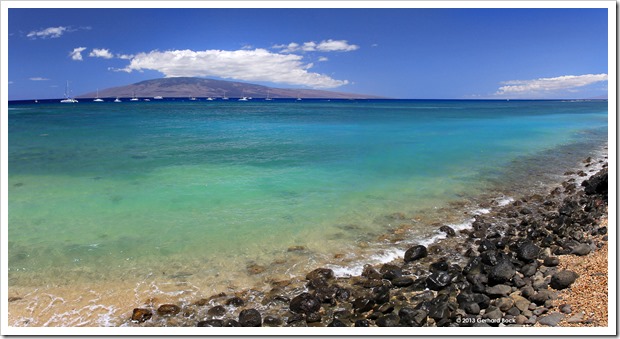 View of Lānaʻi from the Lāhainā waterfront 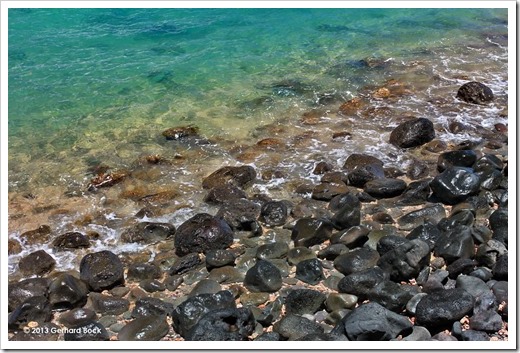 Black pebbles along the Lāhainā waterfront

Today the waterfront is dominated by boat charters and other businesses catering to tourists. No grubby whalers in sight. 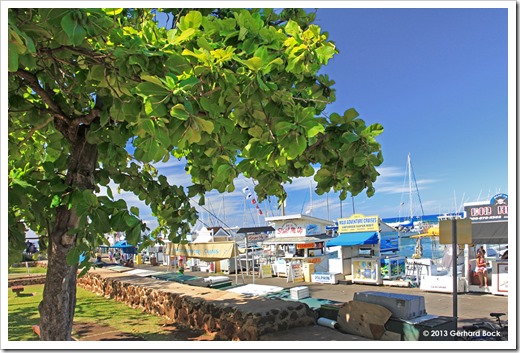 Lāhainā was the capital of the Kingdom of Hawai’i when the first American missionaries arrived in 1823. According to the plaque below, they received a prime spot of land on what is now Front Street to build their homes. 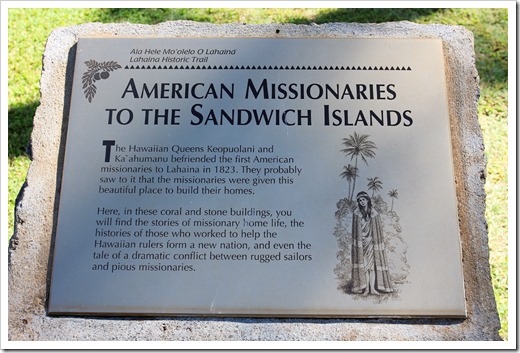 The Baldwin House, constructed by missionary Dwight Baldwin in 1834, is the oldest existing building on Maui. Architecturally, it looks like something you might find on the East Coast. I couldn’t see anything that says “Hawai'i” although it was built of local rock and coral. 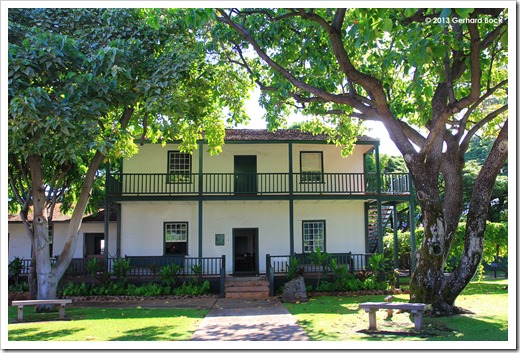 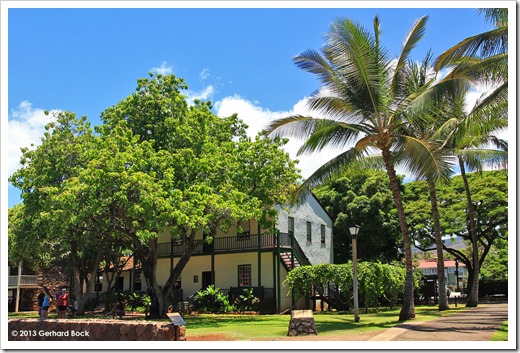 A little ways down Front Street is Lāhainā’s most famous landmark. And it’s not something man-made—it’s a tree! The banyan tree (Ficus benghalensis) behind the Old Courthouse is the largest in the U.S. It was planted as an 8-ft. seedling in 1873 to commemorate the 50th anniversary of the arrival of the first missionaries. By 2005 it had grown to 50 ft. and had developed 16 trunks, its canopy covering almost the entire one-acre park.

It’s virtually impossible to photograph this tree in a way that conveys its size. Most people see 16 trunks and assume it’s a colony of trees. It’s actually one tree, and the auxiliary trunks developed from aerial roots to support the massive canopy. 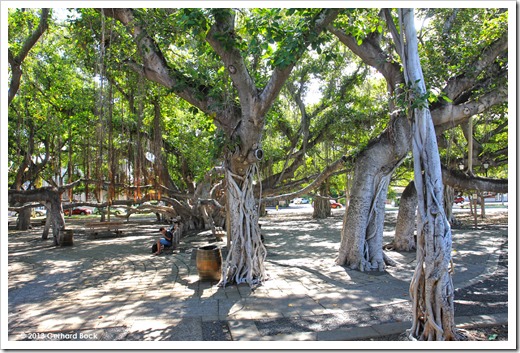 Each trunk was different. Some looked fairly normal—like the trees I’m used to—while others looked like a tangle of tentacles. 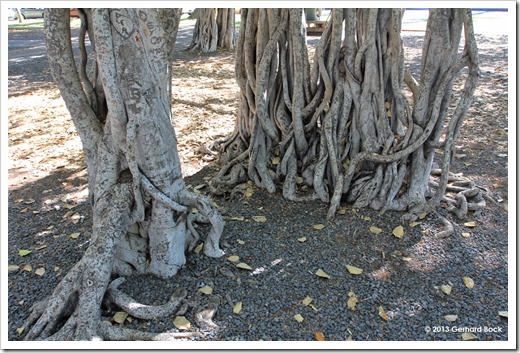 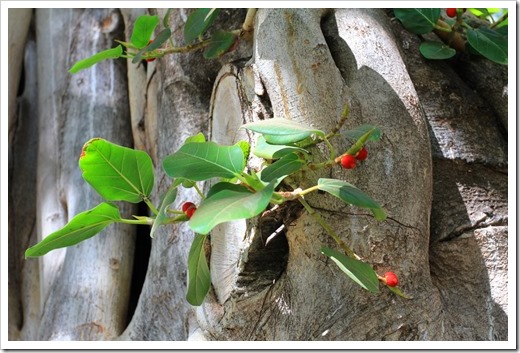 And most trunks were liberally adorned with graffiti, prohibition signs notwithstanding. 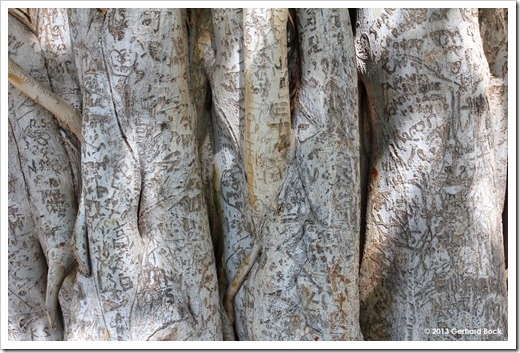 In front of the banyan tree is the old Courthouse, built in 1859. Today it’s a visitor center and also houses two galleries featuring locally produced art. 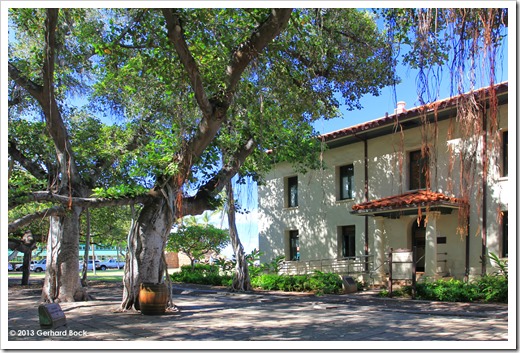 Another interesting building on Front Street is the Pioneer Inn built in 1901. For many years it was the only hotel in town. Everybody tells you that Jack London slept here; I assume many other people of minor and major fame did, too. I thought it was a beautiful building whose architectural style fits in well with the rest of the old two-story buildings in downtown. 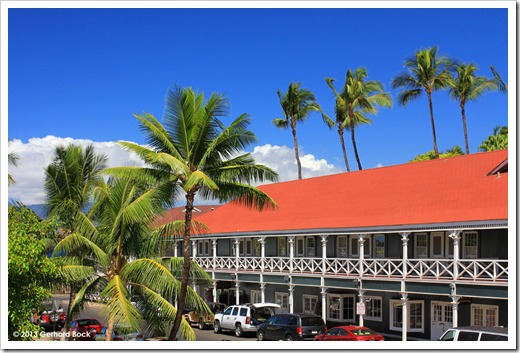 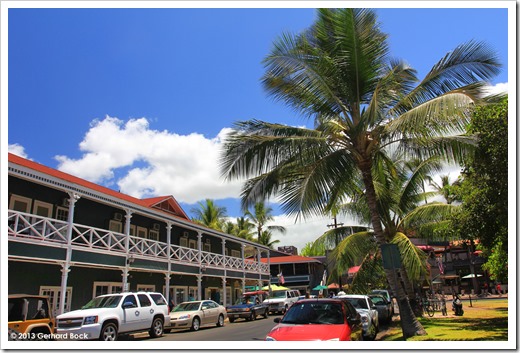 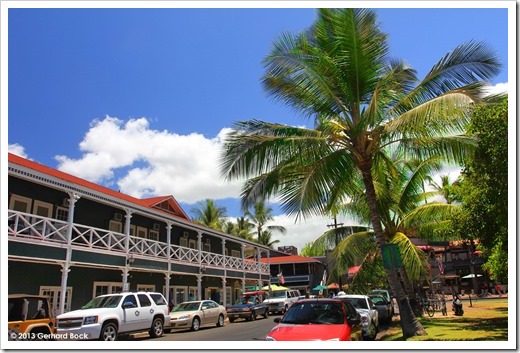 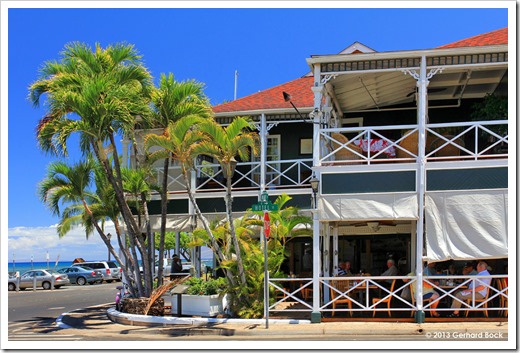 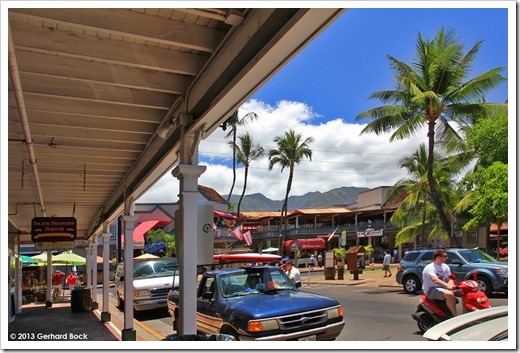 We had lunch at the Cool Cat Café right across the street from the Pioneer Inn. Voted the best burger place in all of Maui, we had excellent garden burgers (mine was topped with feta and grilled watermelon, an odd but delicious combination). The only reason I’m even mentioning lunch is so I can show you this sign. Leo, the Bock family’s traveling garden gnome, was astounded that any human could eat this much food! This was the clearest sign yet that Hawai’i is definitely part of the United States where eating monstrous amounts of food is considered a sport. 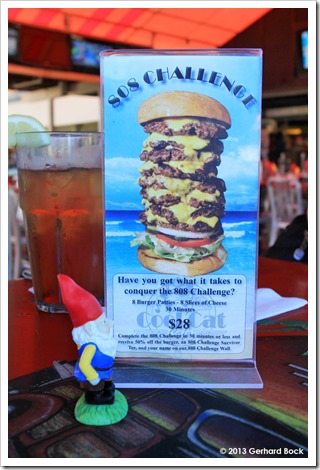 After lunch we walked through the three-story Wharf Cinema Center where Cool Cat Café is located. I couldn’t help but smile when I saw this store display. It’s the height of tackiness, yet if I were a pug owner, I’d probably want one of those miniature surfboards. 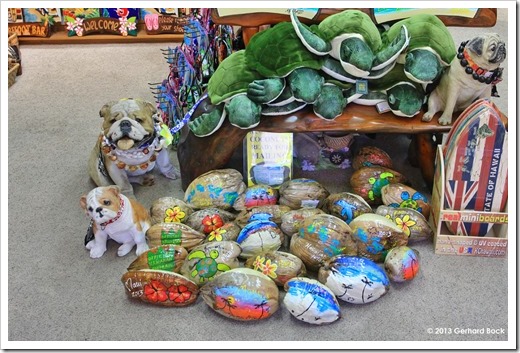 Before heading back to the car, I walked around the residential area just behind the Wharf Cinema Center. In many ways, seeing how the locals live is my favorite part of any vacation. Predictably, I saw more than one papaya tree. 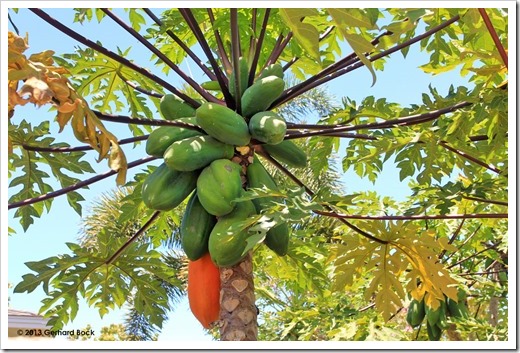 I also saw mango trees, one of which was jealously guarded by this rather unfriendly dude (he clearly wasn’t in an aloha mood). 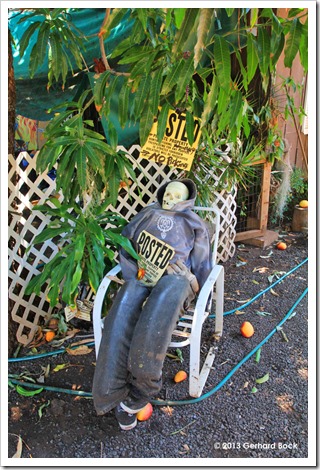 I’m completely fine with telling people not to pick the fruit off my tree. However, you should then do the picking yourself instead of letting the fruit rot on the ground. This poor mango looks like it was in its prime when a car drove over it. 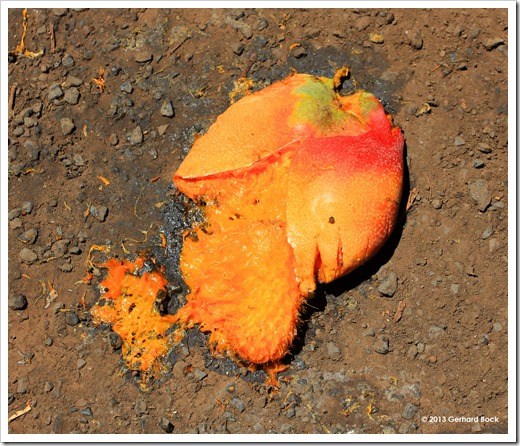 Even worse was this pile of rotting mangoes at another house. Mango is my favorite fruit, and I felt sad seeing all this bounty go to waste. 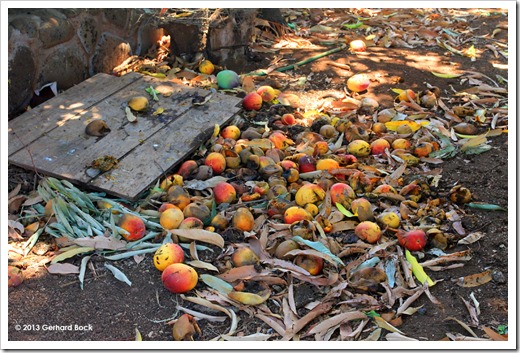 We’ve certainly seen enough bananas now, but I’m still not used to seeing it ripening right on the “tree.” 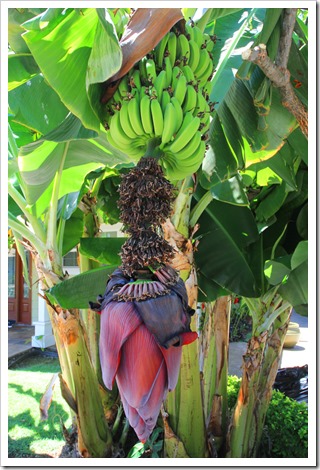 It’s such a cool sight! 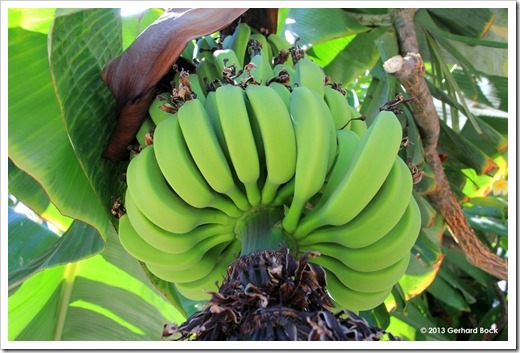 Just a few houses from these lush bananas I came across this front yard. I stood there for a few minutes, not knowing what to think. I’m all for creative landscaping using local materials, but this is a bit too far off the wall for my taste. Too much “ouch” potential for me—just think of all the rough edges on the lava rocks and pieces of coral! 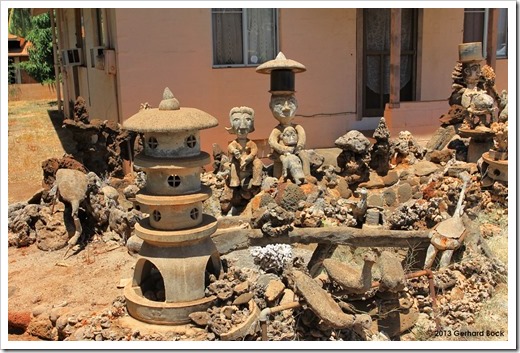 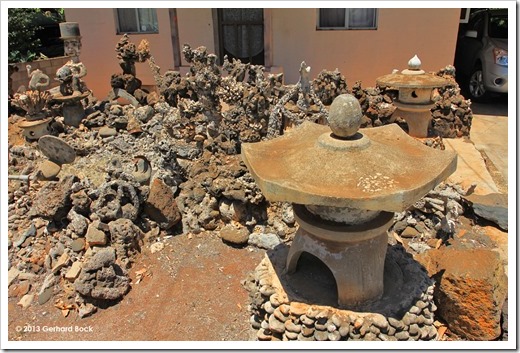 Leaving Lāhainā behind, we drove 10 miles north to Kāʻanapali, one of the most upscale resort areas on the island. Kāʻanapali is a master-planned community started in the early 1960s. It was the first resort development of this scale in the Hawaiian Islands. Today it’s home to major resort hotels, timeshares and condo complexes. Kāʻanapali Beach is considered one of the most beautiful beaches in the country, at least by readers of glossy travel magazines. While there’s no denying it’s a beautiful beach, with sparkling turquoise waters and killer views of both Lānaʻi and Molokaʻi, it was crowded and noisy. I much prefer the quiet serenity of Big Beach in South Maui. But it’s all a matter of taste. Many people would rather have the hustle and bustle—not to mention the endless amenities—of a large resort.

Kāʻanapali Beach with the Westin on the left

Heading back home, I pulled over at several unmarked spots where you can park your car and be at the water in literally less than a hundred steps. The first one had a pebble beach, not everyone’s cup of tea although quite lovely in its own right. 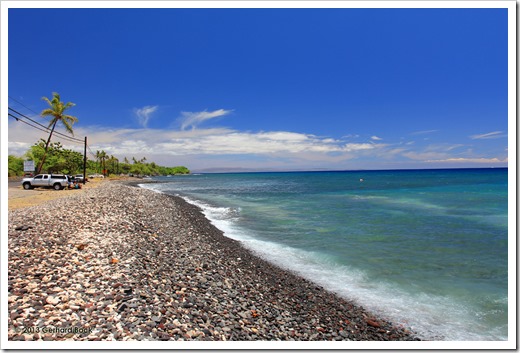 The second one, south of the Papalaua Wayside Park, had fine sand and lots of trees for shade. 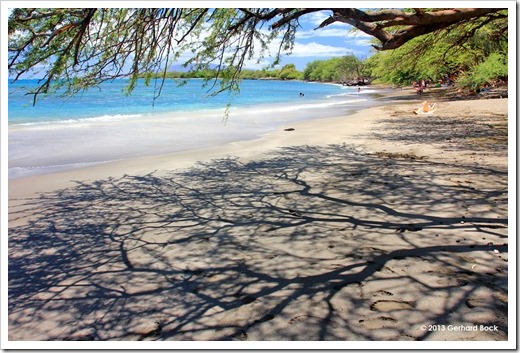 It seems to be popular with locals, judging from the groups of picnickers and swimmers, and I also saw a number of tents. Take a look at the next photo, and you’ll see why people come here.

The last photo in this post was taken at the Papawai Scenic Lookout. From there we had a great view of the slopes of Haleakalā (the summit shrouded in clouds, as usual) and of South Maui. After the relative lushness of our earlier destination, it was a shock seeing such a stark shoreline. Virtually nothing grows here, which must mean that this area is one of the driest on the island. I wonder which desert plants would grow here? It would be nice seeing the shoreline dotted with agaves!

Note: For most of the photos in this post I used a polarizer on my camera. Just like polarized sunglasses, this filter darkens blue skies, removes glare and reflections and really brings out the colors of the ocean. If you’ve never had polarized sunglasses, buy a pair—you won’t regret it. And if you have a DSLR or a camera that takes filters, consider investing in a polarizer.