Fireworks in a pot

At least that’s what I’m hoping for.

Yesterday I found a stunning variegated sport of the common purple fountain grass on the clearance rack at Lowe’s. Called ‘Fireworks’ (Pennisetum x advena ‘Fireworks’), it was patented in 2008 and introduced to much fanfare shortly thereafter. I’d been wanting to give it a try for a while now but since it’s a parented plant, its price has been stratospheric, especially compared to the regular non-variegated variety (whose correct botanical name is Pennisetum x advena ‘Rubrum’ although it’s often sold as Pennisetum setaceaum ‘Rubrum’).

My new purchase, which was 50% off ($6 as opposed to $12 for a 1-gallon container), proved to be very fortuitous and timely. On the edge of the front yard patio there’s a glazed pot with a regular purple fountain grass which I’d neglected to cut back this spring and therefore looked very unsightly. I’d been considering dividing it and removing the dried parts, but my newly acquired ‘Fireworks’ is an even better solution.

Here are some “before” and “after” photos. 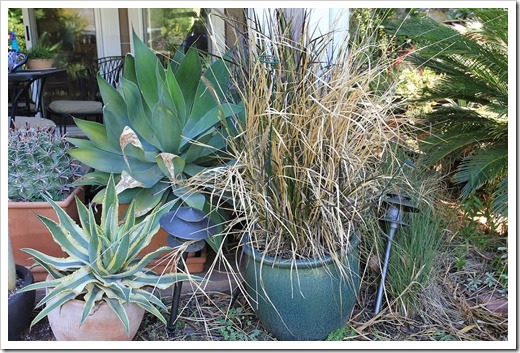 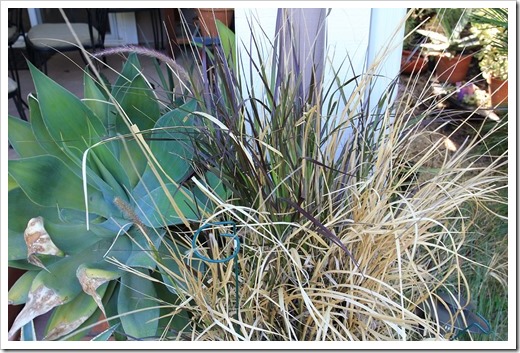 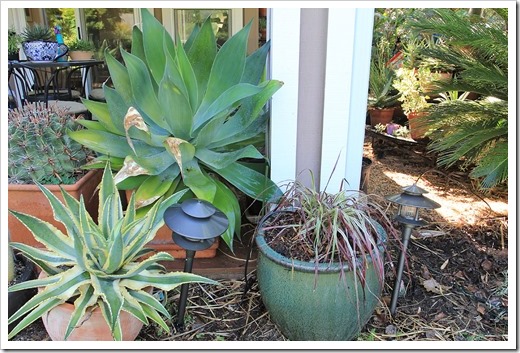 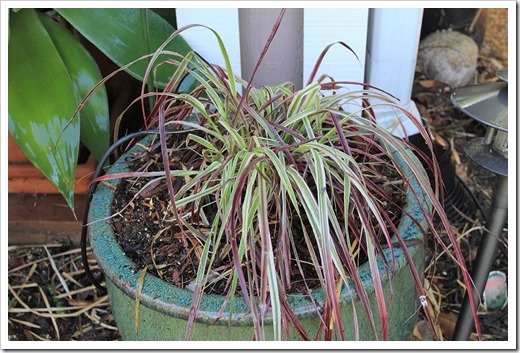 My ‘Fireworks’ looks a little ratty—after all, there had to be a reason why it ended up on the clearance rack—but with water and fertilizer it should perk up quickly.

As beautiful as ‘Fireworks’ is, it’s not without controversy. There’s a fair amount of anecdotal evidence that the variegation is unstable—at least based on initial reports from when this cultivar was first released. Some people say that after a while it looks like the regular purple fountain grass. But at the same time, there are many photos that show ‘Fireworks’ in all its glory. Just take a look at these two: 1 2.

No matter what, I’m willing to perform my own trial, and $6 is an acceptable investment. I’ll report back later in the summer.

Note: My specimen gets full sun in the afternoon. The purple fountain grass that had been in this pot before loved this spot and bloomed profusely every summer. I’m hoping ‘Fireworks’ will do the same.