In May, our tower of jewels (Echium wildpretii) finally started to bloom. I had been waiting for this since I planted it in the fall of 2009. Tower of jewels is a drought-tolerant biennial from the Canary Islands; in year 1 it produces a rosette of soft gray-green leaves, and in year 2 the rosette elongates into a cone up to 8 ft. tall (ours was only about 5 ft.) eventually covered with small flowers. Check out my original post; it has lots of photos of the flowers.

Like all biennials, tower of jewels dies after setting seeds. And it is a seed-making machine! I have no idea how many there were, but probably thousands. Check out this post from June about the seed production stage.

By mid-July, the flower cone had dried up completely, and I’m sure quite a few seeds fell off into the surrounding planting bed. No seedlings yet as far as I can tell, but I wouldn’t be surprised to see some pop up later in the year.

Initially, the flowers were as soft as the leaves on the rosette had been—they had the same tactile quality as lamb’s ears. However, as they began to dry up, what was left became hard and prickly, unpleasantly so. In fact, after touching the plant, tiny barbs remain in your skin—much like what happens when you touch one of those soft-looking Bunny Ears prickly pears (Opuntia microdasys 'Albata').

At the end of July, I cut down the top ⅔ of the tower (wearing thick gloves!) and stripped off the seed heads onto a tarp spread out on the lawn. My mother, who was visiting at the time, separated the seeds from the chaff and we ended up with a nice little pile.

Then something curious happened. This is what the remaining ⅓ of the tower looked like after I had cut off the top:

By early August, new leaves had begun to grow from the stalk! 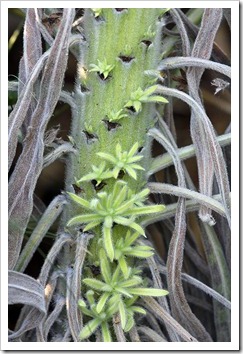 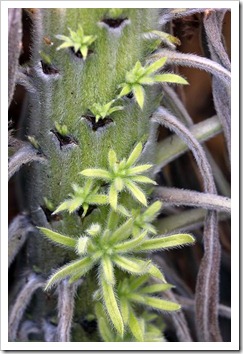 Actually, I had hoped that this would happen. I’d read a post on Dave’s Garden by a gardener in Southern California who reported a second bloom after cutting off the top of the tower. I have no idea if my tower will bloom again or whether it will simply expend its remaining energy on a few leaves, but time will tell.

In the meantime, I placed some seeds in a pot filled with well-draining soil, and after three weeks six seedlings have come up. I will coddle them along until they’re big enough to go into their own pots and eventually in the ground. I’m not sure I have room for six towers of jewels, but where there’s a will, there’s a way.