40-acre Capitol Park is a true gem right in the heart of Sacramento. Home to the California State Capitol, the park features a number of memorials as well as trees and shrubs from all over the world. A standout is the Civil War Memorial Grove with trees that came from Civil War battlefields; these trees are now over 150 years old.

Capitol Park is particularly spectacular in early spring when the rhododendrons burst into flower and in May and June when the giant magnolias are covered with dinner-sized blossoms. But even in summer when most trees and shrubs are done blooming, there’s plenty to see and do—even if it’s just lazing in the shade of a tall tree with a book or latte, like many locals are wont to do.

The reason why I stopped by Capitol Park on Sunday morning was to photograph the stand of giant timber bamboo (Phyllostachys bambusoides). I have not been able to find out much about its age and origins, but it’s located right next to a large clump of cooking bananas (labeled Musa x paradisiaca although that scientific name is no longer valid). Take a look at the first two photos: the bamboo makes the bananas seem small even though they are easily 10 ft. tall.

The gap between the bamboo and the bananas has been bridged by several errant rhizomes, as evidenced by the culm in the next photo (on the left) and a couple of others that have invaded the bananas. Both the bananas and the bamboo are well maintained, and I’m wondering whether the Capitol Park gardeners will let the bamboo culms stay inside the banana grove or whether they will remove them.

As you can see in the next photo, both the bamboos and the bananas get ample water. If I were a bamboo, I’d be happy here, too.

Phyllostachys bambusoides is a giant timber bamboo native to Southern China and widely cultivated in Japan where it is called “madake” and much used in construction. Its listed maximum height under ideal conditions is 72 ft., but the specimens in Capitol Park were maybe half that. But in spite of their shorter height, the plants looked very healthy, so it’s possible they haven’t reached maturity yet. I will try to contact the Capitol grounds maintenance department to see what the history of these plantings is. 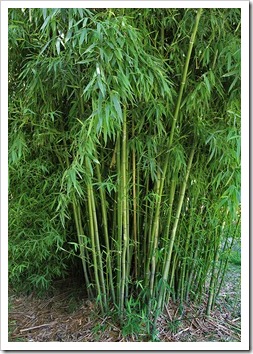 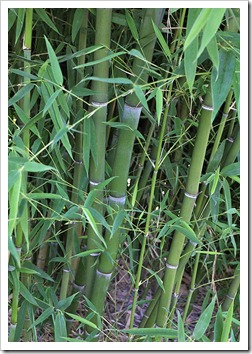 The Phyllostachys bambusoides grove is found off the main path that extends from the rear of the Capitol building to the International World Peace Rose Garden at the 15th Street end. See the following map (courtesy of Google Maps): 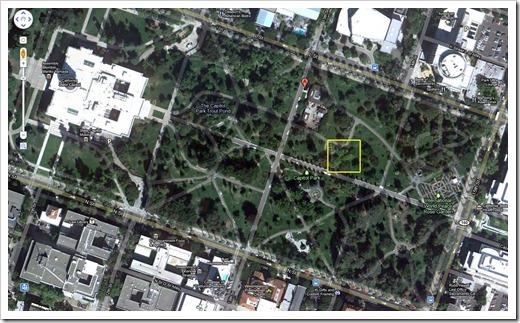 Sunday is the best day for a visit because street parking along the perimeter of Capitol Park is free.