At this time of year, I water our potted succulents once a week. Sometimes I do it leisurely, inspecting each plant for new growth or just admiring their form; sometimes I’m rushed and try to get it done as quickly as possible.

Three weekends ago I must have been rushed and not paid much attention to what was going on. This became very apparent when I noticed the following week that our sempervivum bowl had the worst case of mealybug infestation I’d ever seen on a succulent. I immediately sprayed with neem oil, which is typically quite effective, and quarantined the bowl to a far corner of the yard. When I checked back a few days later, most plants were dead—I hadn’t caught the infestation early enough. I might have been able to save a few plants, but I decided to just dump the entire content of the bowl into the garbage can and start over. The thought of trying to salvage anything was too discouraging and just plain unappealing. 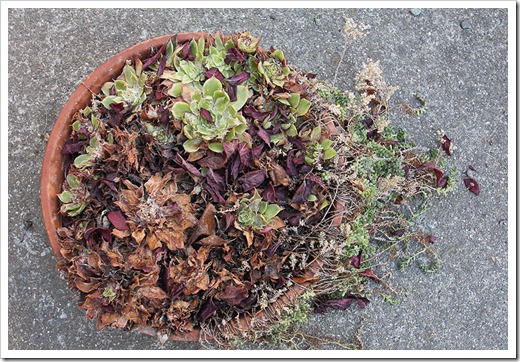 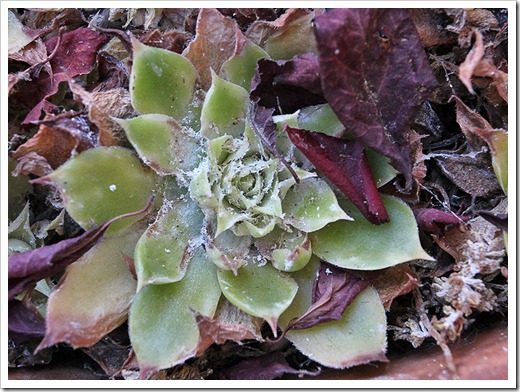 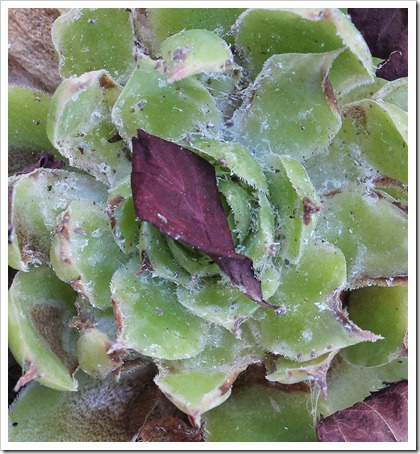 A few years ago we had a pretty bad mealybug infestation on brown-eyed susans (Rudbeckia triloba), and I ended up ripping out the affected plants. But this is the worst case I’ve ever seen on succulents. Any cactus collector will have to deal with mealybugs and other members of the Coccoidea superfamily, such as cochineal insects that live on prickly pears (I have found a few of those but they don’t seem to get worse).

Small-scale infestations are easy to eradicate with Q-tips dipped in rubbing alcohol or a few applications of insecticidal soap or neem oil. Early detection and intervention is key, though—clearly something I failed to do in this case. Mealybugs multiply rapidly in hot, dry weather and can kill even a large specimen very quickly (reference).

After dumping the infested plants, I thoroughly cleaned the terracotta bowl, filled it fresh soil, placed some rocks I brought home from our recent trip to the Oregon coast, and finally added seven sempervivum babies I had growing. 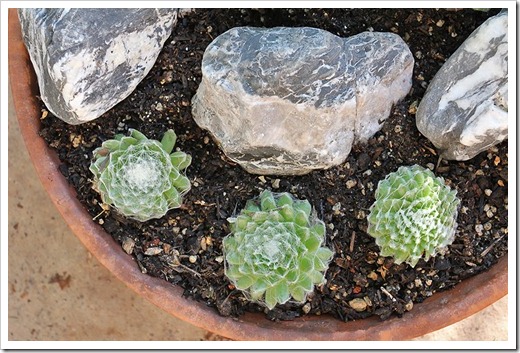 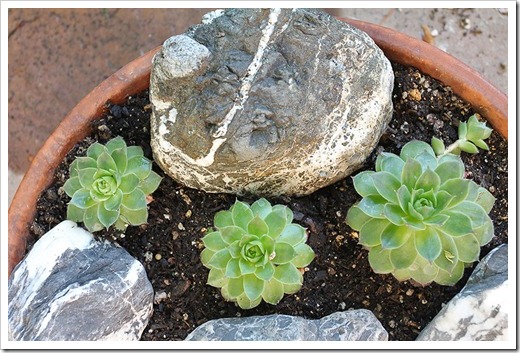 These are three sempervivums I received as part of a plant trade. They’ve rooted nicely since I received them. I don’t know what species/hybrids they are; it’s virtually impossible to tell the many cultivars apart. 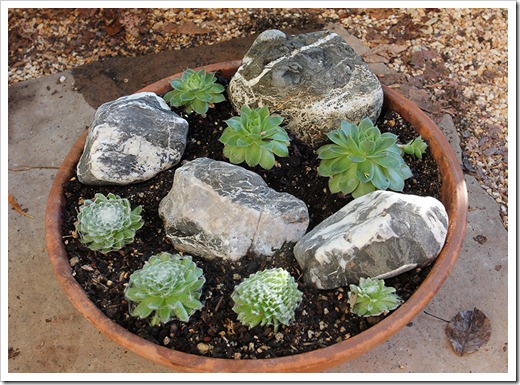 And here is the finished product. It’ll be overgrown in no time but the rocks will continue to add nice contrast and texture.

Admittedly, I wouldn’t have started over if it hadn’t been for this mealybug infestation, but I actually prefer this new arrangement to the solid mass of sempervivums and trailing sedum from before. Often what seems like a negative thing ends up being a plus.