“In Japan, when a man comes home from work, no matter how small his garden, he should take off his business jacket and put on his Japanese coat, pour a cup of sake and walk in his garden and relax and contemplate. Only then should he join his family.”

The Portland Japanese Garden is located in Washington Park on a 5.5 acre site that was the home of the Oregon Zoo before it moved to its current location in 1959. The garden was designed by Professor Takuma Tono, considered one of the leading Japanese landscape architects of his time, and opened to the public in 1967. Tono’s design, and the work of successive generations of landscape directors from Japan, was so successful that the Portland Japanese Garden has been called “one of the most authentic Japanese gardens outside of Japan” and “the most beautiful Japanese garden, not only in the United States, but in the world outside of Japan”. Thanks to the hard work and dedication not just of the garden staff but also of the many hundreds of volunteers, this was achieved in just a few years when traditional Japanese gardens take decades to mature. 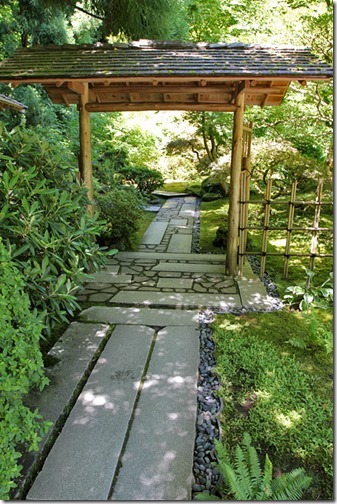 Gate between the inner and outer section of the Tea Garden

Much of the original plant material came from local sources in the Portland area. Some of it was donated by private individuals, including decades-old maples and pines, and some of it came from public sites that underwent major transformations, for example to make way for new public buildings or freeways. Most of the more than 20 stone lanterns in the garden were donations or gifts from American and Japanese individuals and organizations. The generosity, vision and dedication of so many people made it possible to create a world-class Japanese garden that combines traditional Japanese values with American ingenuity.

The Portland Japanese Garden encompasses five distinct areas, each of which corresponds to a specific garden style: Strolling Pond Garden, Natural Garden, Sand and Stone Garden, Flat Garden, and Tea Garden. Each style has a unique purpose, but they all are living reflections of Japanese history and culture and allow us to connect with nature as an active participant rather than as a passive bystander. Nature in this context isn’t the untamed wilderness traditionally extolled by American philosophers, but a carefully controlled naturalistic environment where simplicity, serenity, subtlety and stillness are paramount. As abstract as that may seem, Japanese gardens are meant to provide a refuge from the hustle and bustle of everyday life and ultimately enhance our quality of life and well-being.

Each Japanese garden incorporates three fundamental elements: stones, water, and plants. Stones represent endurance and strength; water represents renewal, calm and continuity, in this life and thereafter; and plants express emotions. Harmony between these three basic elements is essential for a Japanese garden to truly become a retreat. Other elements, such as stone lanterns and basins, bridges and arbors, may or may not be present in a Japanese garden. In Portland they are, and they play an important role in introducing a human element to the landscape.

I visited the Portland Japanese Garden last July and was struck by the serenity and tranquility that existed even on a busy day. The use of traditional Japanese landscaping principles such as “hide and reveal” ensures that garden features show themselves to us gradually and almost reticently, instead of all at once the way they would in a western garden. A welcome side effect of this technique is that other garden visitors often disappear around a bend in the path or behind a hill, increasing the sense of peacefulness and quiet.

I took several hundred photos during my visit. When reviewing them for this article, I realized that I didn’t take any that show grand vistas. Instead most of them focus on smaller elements of the garden—landscape features, plants and ornaments. This reflects my current interest in incorporating specific elements of a Japanese garden into our own garden. Since I’m not Japanese and am not rooted in Japanese culture, my goal is simply to borrow features that appeal to me on an aesthetic—rather than philosophical—level.

Each part will have about a dozen photos to illustrate the features I found most interesting.

The photos I decided to include in this post illustrate the materials used in creating specific design features in the Portland Japanese Garden. I was particularly fascinated by the way stone, bamboo and other natural materials are incorporated in a completely holistic way. After doing some research, I realized that many materials originally came from other locations and were reused in keeping with the Japanese concept of mitate, or “re-envisioning”. In fact, the Portland Japanese garden itself is an example of mitate since it is built on—and completely transforms—the site of the former Oregon Zoo, from all accounts a wretched and squalid place in its day.

The idea of creatively repurposing and adapting old materials is a very powerful one. On an environmental level, it’s about reusing stuff that might otherwise get thrown away. On a more spiritual level, it’s about establishing a link to the past by adopting materials that are imbued with our own history. It has taken Western countries a long time to discover this disarmingly simple philosophy. 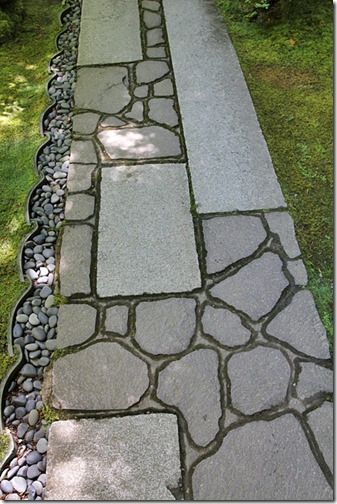 Granite walkway in Tea Garden. The granite came from the entry steps to the Portland Civic Auditorium which were removed as part of a renovation project. 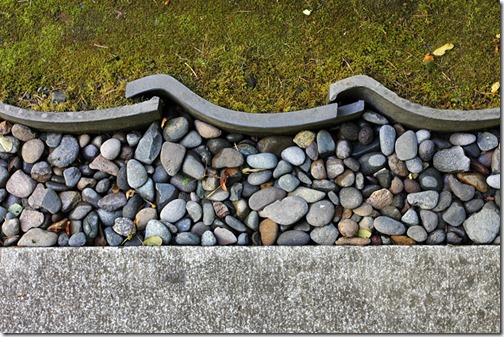 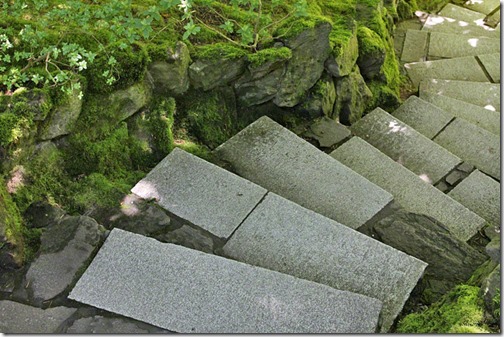 The same granite slabs repurposed as steps in the Natural Garden 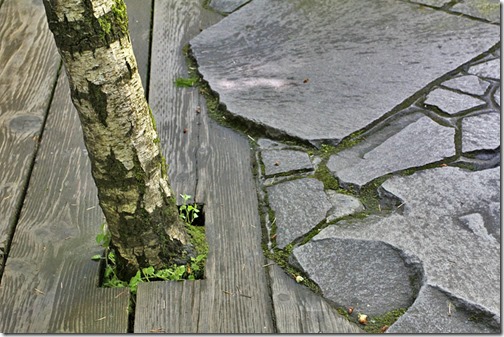 Juxtaposition of granite, wood and living tree: nature precisely controlled to provide a place of rest and reflection 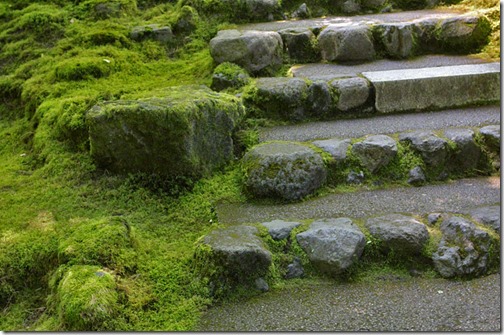 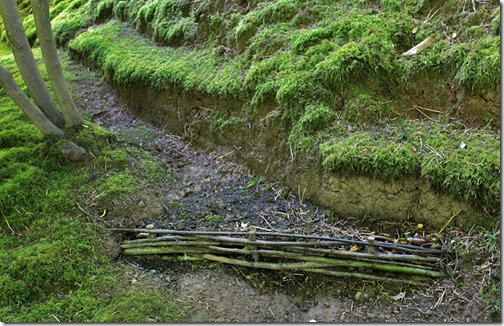 Willow fascine (yanagi soda) in the Natural Garden, designed to hold back rocks and soil that might erode from the hillside above 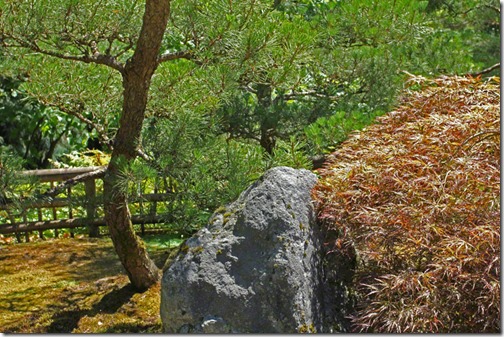 Large stone between a pine and Japanese maple. Each stone was carefully selected for its shape and size and placed where it fits most harmoniously. 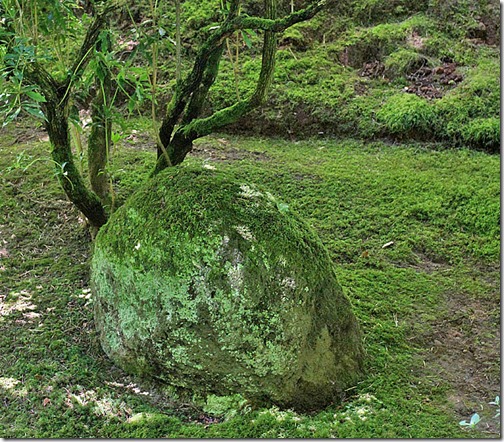 Stone overgrown with moss. Stones represent the eternal in nature. Their placement is very precise and should look as if it happened naturally instead of by the hand of man 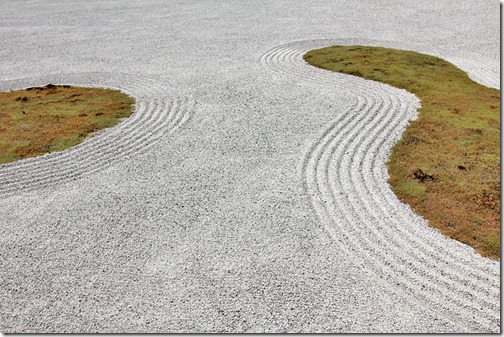 Moss islands in the Flat Garden. The sand was originally fine gravel from Japan called shirakawa sand, but more recently the garden has been using Canadian sand obtained from a local supplier 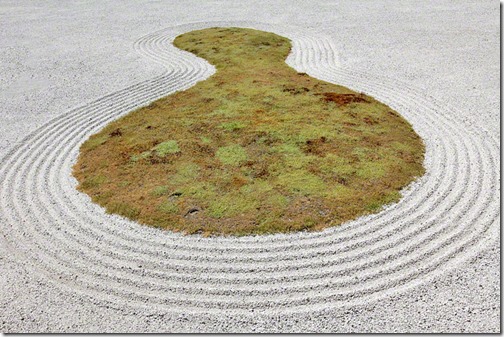 Gardeners rake the sand in the Flat Garden at least once a month. They choose their own pattern which reflects their current mood. 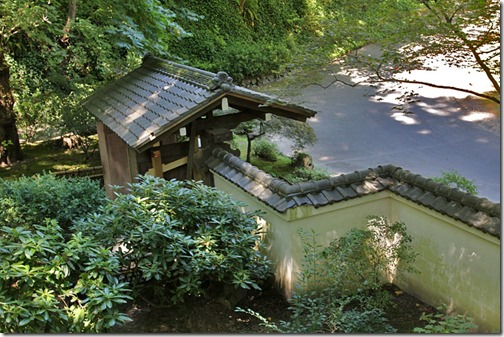 Antique Gate and stucco wall. The Antique Gate is the located at far end of the parking lot at the base of the hill. It was shipped from Japan and, after sitting in boxes for years, finally reassembled in 1976. Most visitors make the short but steep hike on the 500-ft. footpath to the main entrance at the top. 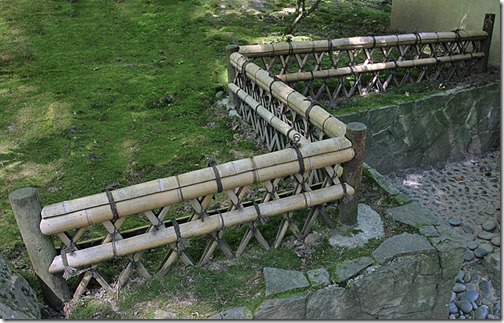 Bamboo fence in the ryôanji-gaki style 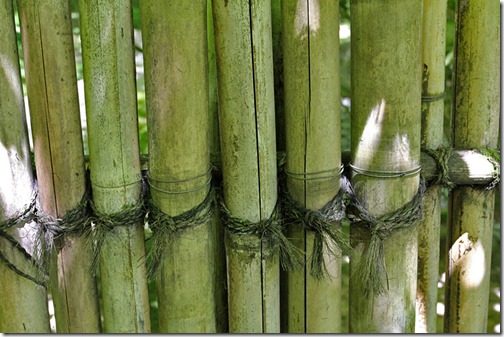 The creative forces behind the Japanese Garden have integrated these elements in such a cohesive and fluid way that they function as an extension of the natural world. Even though, as I said above, I have no intention of creating an authentic Japanese garden, I draw inspiration from what I have seen in Portland and continue to explore ways of incorporating some of these concepts into our own garden.