While plants form the natural backbone of a Japanese garden, ornaments provide the human element. Professor Tono, the designer of the Portland Japanese Garden, felt that “among the garden ornaments, probably there is nothing so impressive as the stone lantern” and that stone lanterns “do much to humanize the landscape”.

Lanterns are founds in very specific locations—places where traditionally their light would have shown visitors the way, such as at the junction of two trails or next to a water basin or well. Beyond that, they are found in spots where they lend drama or balance to a view; there their purpose is symbolic instead of functional. 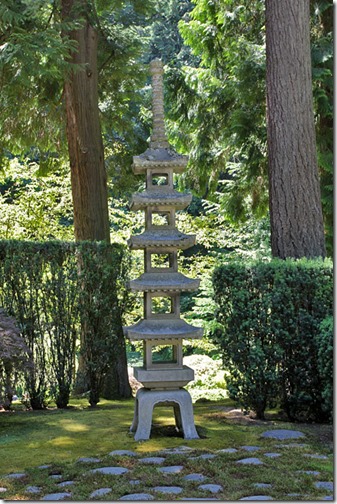 The 18 ft. Sapporo pagoda lantern was a gift from Portland’s sister city Sapporo in 1963. This two-ton stone pagoda has five tiers representing the five elements (earth, water, fire, wind, space or ether); the nine rings on top represent the Buddhist concept of nine heavens; and the lotus blossom on the very top represents Buddha.

The Portland Japanese Garden has more than 20 stone lanterns, many of them donated by individuals and organizations in the U.S. and Japan. Other ornaments, such as water basins, an ancient mileage marker, a religious figure and an inscribed stone, are additional humanizing influences amid the highly idealized natural environment. 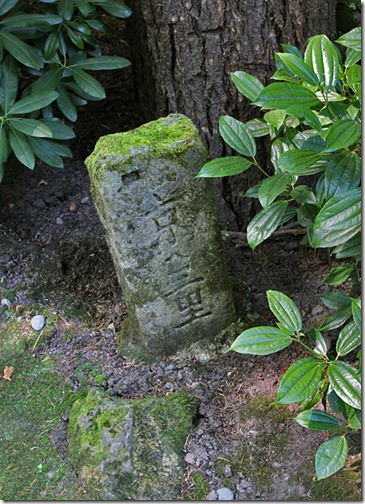 Mileage marker originally used on the ancient road from Kyoto to Edo (now Tokyo). This marker is located inside the Antique Gate at the beginning of the steep trail that goes from the parking lot to the main entrance. 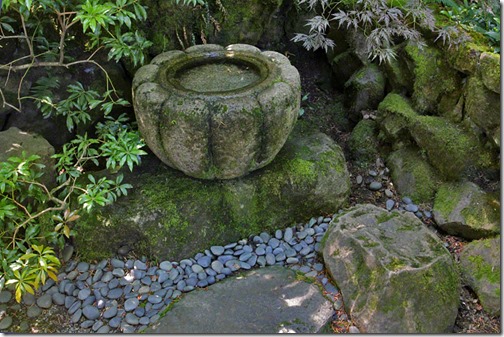 Water basin in the shape of a lotus flower inside the Antique Gate near the parking lot. Each entrance typically has a basin for the symbolic act of cleansing, which serves to calm the visitor’s senses as (s)he leaves the outside world behind upon entry to the garden. Basins are surrounded by stones with specific functions. 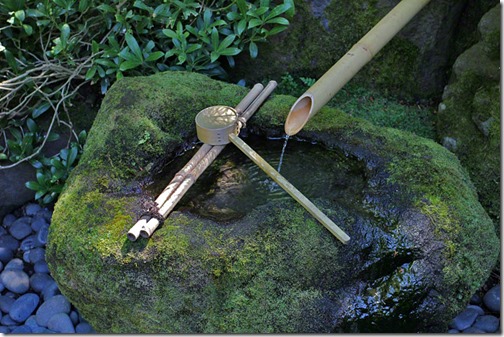 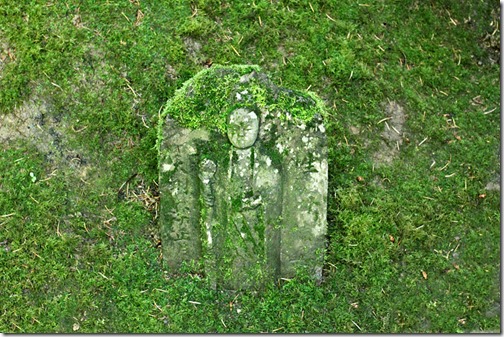 This small stone tablet with a bas-relief figure was left at the Portland Japanese Garden by an anonymous donor. It is now found at the bottom of a mossy slope in the Natural Garden. It shows a bodhisattva, an enlightened being who has delayed entering nirvana in order to help others reach enlightenment. 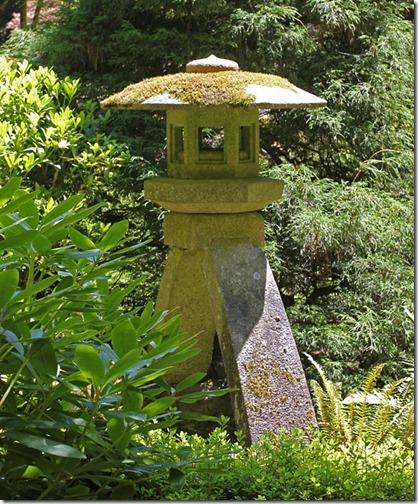 Harp tuner lantern (kotoji doro) at the stream that connects the Upper and Lower Pond in the Strolling Pond Garden. One leg of the lantern is in the water, the other is on land, symbolizing the interconnectedness between the two. 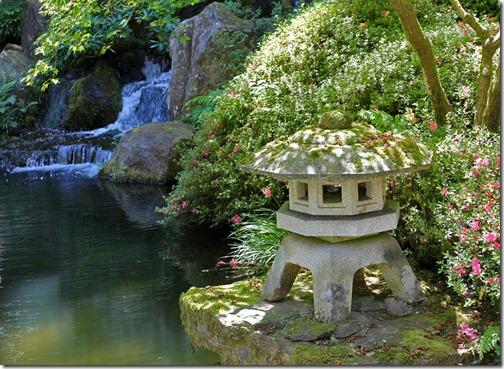 Snow viewing lantern (yukimi doro) at the Lower Pond in the Strolling Pond Garden. This magic site used to be the bear grotto in the old zoo—almost impossible to imagine now. 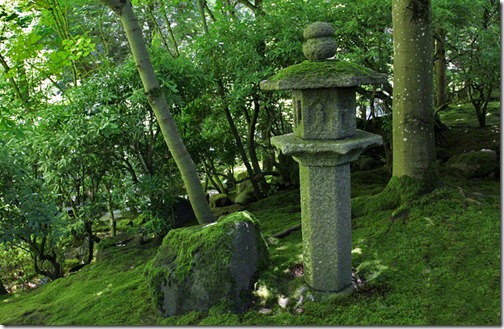 Pedestal lantern in the Natural Garden. Everything in this section of the garden is covered with moss, evoking the feeling of an ancient landscape 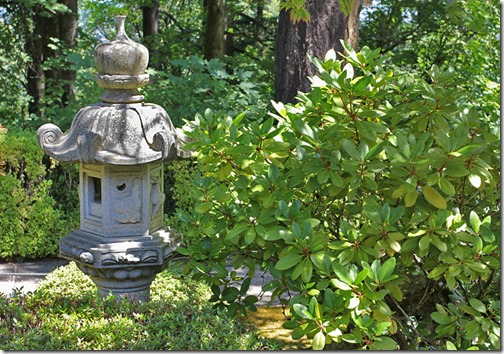 Stag lantern in Flat Garden. This is a classic pedestal lantern named after the Kasuga shrine where this type of lantern was first used. The design dates back to the 8th century. 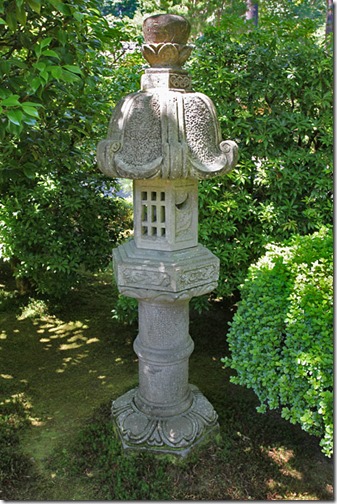 Olympic lantern in the Flat Garden. The Olympic rings are clearly visible at the top. This Kasuga-style lantern was carved in Sapporo and donated to the garden in 1979. 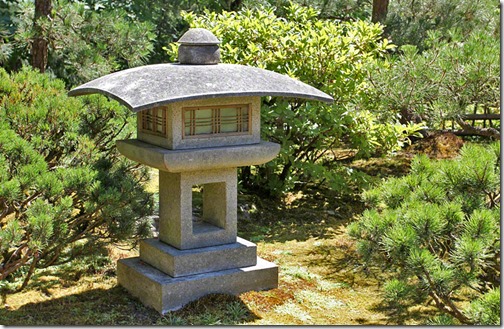 Kanjuji lantern in the Flat Garden, named after the Kaju-ji Temple in Kyoto. This is a less ornate lantern style that is particularly popular in more contemporary Japanese gardens. 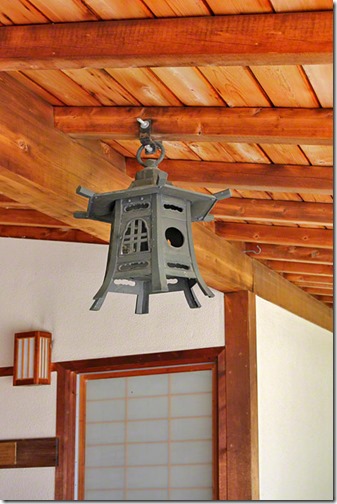 Metal lantern at the raised pavilion in the Flat Garden 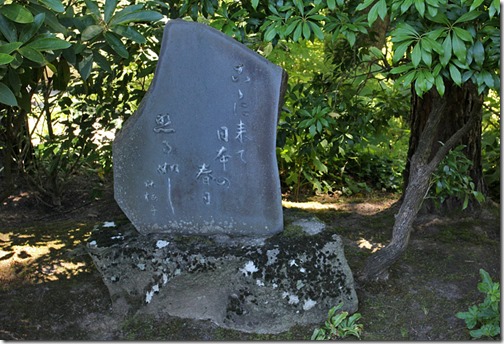 Poetry Stone in the Flat Garden. The inscription translates as
“Here I saw the same soft spring as in Japan”.